The husband of missing conwoman Melissa Caddick left frantic texts on her phone on the morning she vanished before penning a romantic post-it note declaring that their love was ‘deeper than possessions’, an inquest has heard.

Anthony Koletti has opened up on their nine-year relationship at the inquest investigating Caddick’s disappearance and suspected death in November 2020.

He also recalled the moment the pair fell in love at a secret meeting and struck up an ‘intimate friendship’ while she was still married.

The inquest was also shown a loving post-it note and text messages the part-time hairdresser and aspiring DJ sent to Caddick on the morning she vanished from their Dover Heights mansion – just hours after being raided by corporate watchdog the  Australian Securities and Investments Commission.

Mr Kolleti revealed in an affidavit that he first met his future wife in 2005 at the salon where he worked. Caddick was married to her first husband at the time.

The pair remained friends until a secret meeting in 2011, as Caddick was preparing to relocate to London with her family.

‘We agreed to meet to have lunch so that Melissa could say goodbye,’ Mr Koletti recalled.

Melissa Caddick (left) was married to her first husband when she met Anthony Koletti (right) at a salon in 2005. They didn’t become a couple until six years later after she moved to London

‘It was during this lunch that our friendship shifted from hairdresser and client to a more intimate friendship.

Mr Koletti remained in touch with Caddick and travelled to New York in May 2011 to meet up with her.

Shortly after the affair started, Caddick separated from her first husband in 2011.

Caddick and Koletti returned to Australia in 2012, with the hairdresser moving in with her.

The inquest also heard Mr Koletti’s recollection of their final night together on November 11, the day ASIC raided their home. 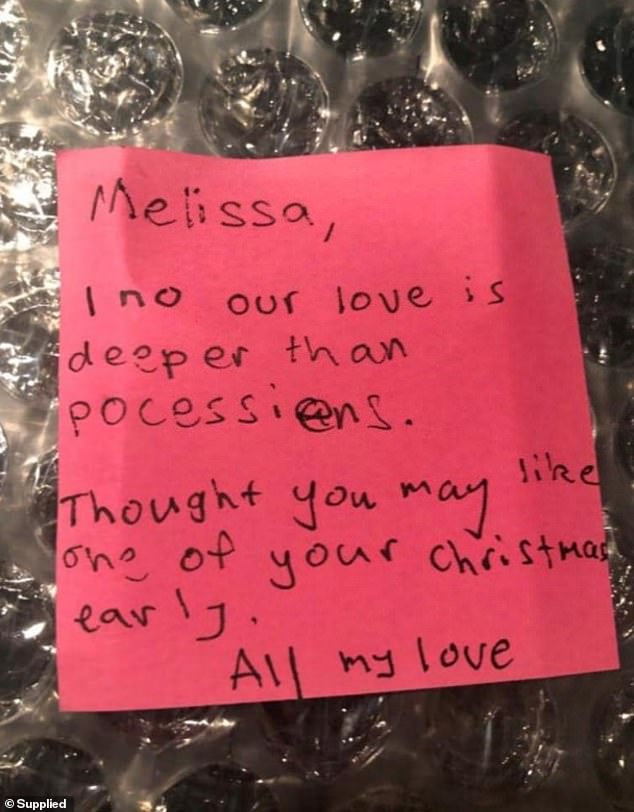 Anthony Koletti stuck a post-in note (pictured) on his wife’s phone next to an early Christmas present on the morning she vanished on November 12, 2020

November 12 2020: The fraudster vanishes from her home in the early hours and is never seen again.

He said after the 12-hour raid ended at 6pm, the couple had a takeaway dinner before going to bed about 9.30 pm.

Mr Kolleti said he woke during the night before going back to bed at 4am, when he last saw her.

He woke up at 6.30am to the door slamming and was told by Ms Caddick’s teenage son that he assumed she had gone for a run.

Mr Koletti sent his wife several texts, when she had not returned by 7.16am.

He then asked if she had her key before he found her phone still charging in their walk-in closet.

Mr Koletti said he stuck a bright pink post-it note on her phone, along with a pair of earrings as a surprise gift.

‘Melissa I no (sic) our love is deeper than possessions (sic),’ he wrote.

‘Thought you may like one of your Christmas (sic) early. All my love.’

Despite telling police soon after she disappeared that his wife consistently went out for morning runs, Mr Koletti told the inquest he could not remember the last time that happened. 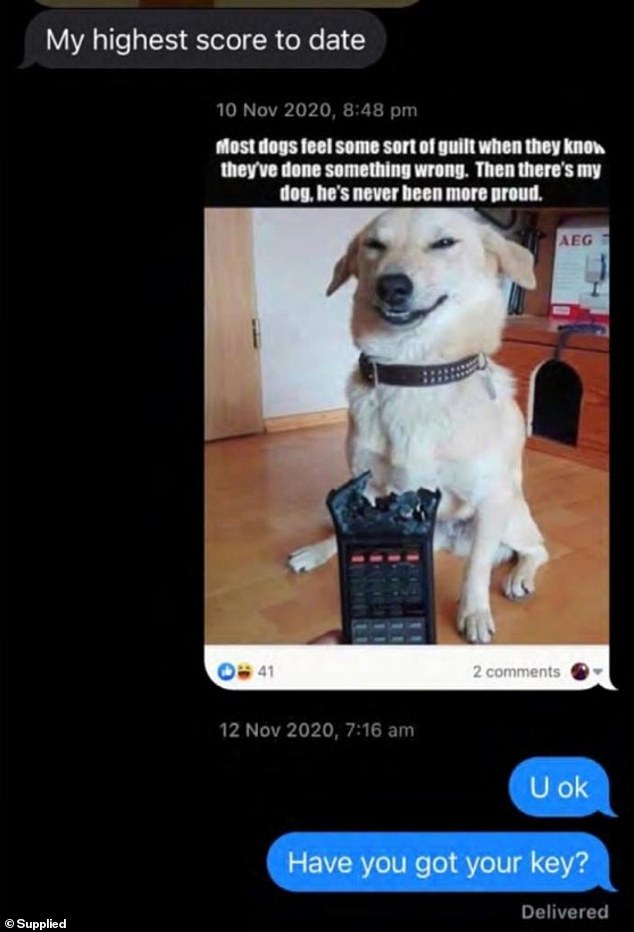 Mr Koletti is set to resume giving evidence on Wednesday after counsel grilled him on several inconsistencies in his evidence on Tuesday.

He told counsel assisting Jason Downing SC that on the morning of her disappearance in November 2020, he assumed Ms Caddick had gone out to do some exercise.

Despite Mr Koletti telling police that it was typical of Ms Caddick to go for outside morning jogs, CCTV footage later revealed a different story.

‘Isn’t it the case that the month prior Ms Caddick had not once gone out to jog or walk?’ Mr Downing asked him.

‘Yeah that’s true she was jogging on the treadmill prior to that,’ Mr Koletti said.

Inconsistencies in his story continued to unravel on Tuesday, as the court was played an interview on 7News’ Spotlight where Mr Koletti claimed he was up until 4am writing music. 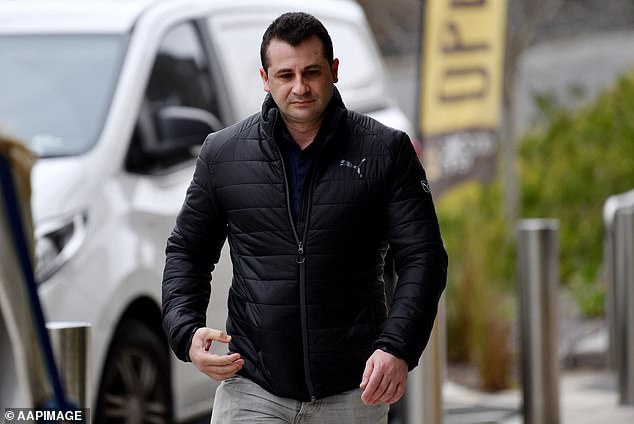 But he told the inquest he had gone to bed with his wife before later getting up due to his sleep apnoea.

‘The account you give media is markedly different to what you said today,’ Mr Downing said.

When asked what had changed, Mr Koletti said he had ‘sat down and had the proper time to get the truth to make it easy to understand’.

Despite being paid $150,000 for the Spotlight interview, Mr Koletti said his answers were not scripted or rehearsed.

He said he has always been truthful but admitted there may have been moments when his ‘wires were crossed’ due to his concern and worry. 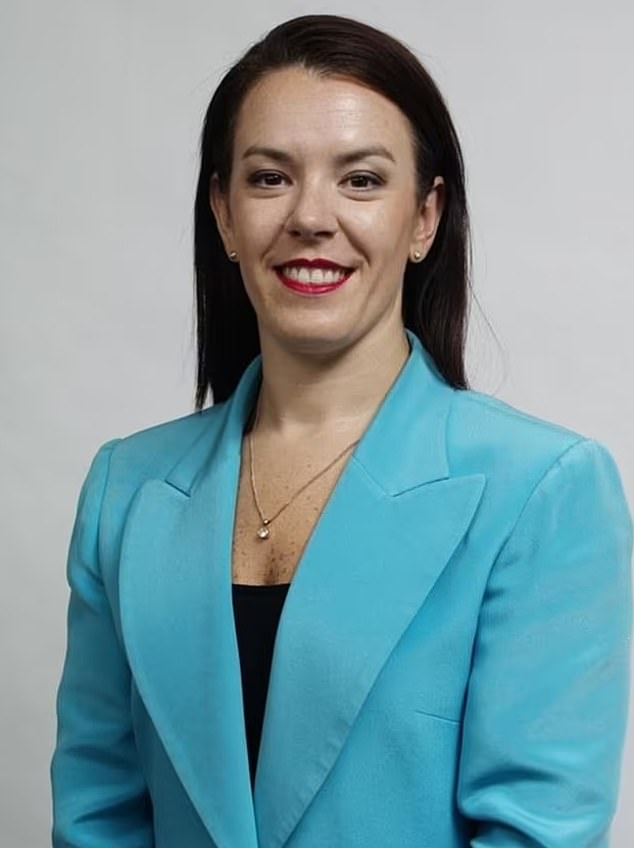 Within a year of relocating to London with her first husband, Melissa Caddick (pictured) had returned to Australia and moved in with Anthony Koletti

He insists he had no inkling his wife was defrauding family and friends of millions of dollars, nor did he ask her why federal police or ASIC was suddenly searching their Sydney eastern suburbs home.

‘Does the truthful answer depend on who is asking [the question] and why?’ Mr Downing said.

‘Are there many truths?’ Mr Downing said.

‘There is one truth,’ Mr Koletti said.