Furious protestors have vowed to stage another rally in Melbourne after Dan Andrews shut down Victoria’s $22billion construction industry following violent riots which shook the city, despite attendees being blasted as ‘drunken un-Australian morons’ by a top union boss.

The closure across Metropolitan Melbourne, Geelong, the Surf Coast, Ballarat and Mitchell Shire was decided by officials on Monday and announced after the CFMEU building was damaged and riot police deployed in chaotic scenes.

Tradies were filmed throwing projectiles at the union building in the CBD as a demonstration against mandatory vaccines turned violent, with cops forced to fire rubber bullets at the crowd.

A few hours later, it was announced that hundreds of thousands would be out of work thanks to an unprecedented industry-wide shutdown, understood to have been imposed due to the high levels of Covid transmission happening at worksites and the government’s fears of ‘non-compliance’ with new rules.

But hundreds have vowed to gather again outside the battered CFMEU building again on Tuesday at 10am, with a poster being distributed throughout social media and on encrypted apps including Telegram.

The rally, titled ‘Victorian Workers Rally For Freedom’ calls for an end to vaccine mandates, with the group vowing the ‘rally will continue until demands are met.’ 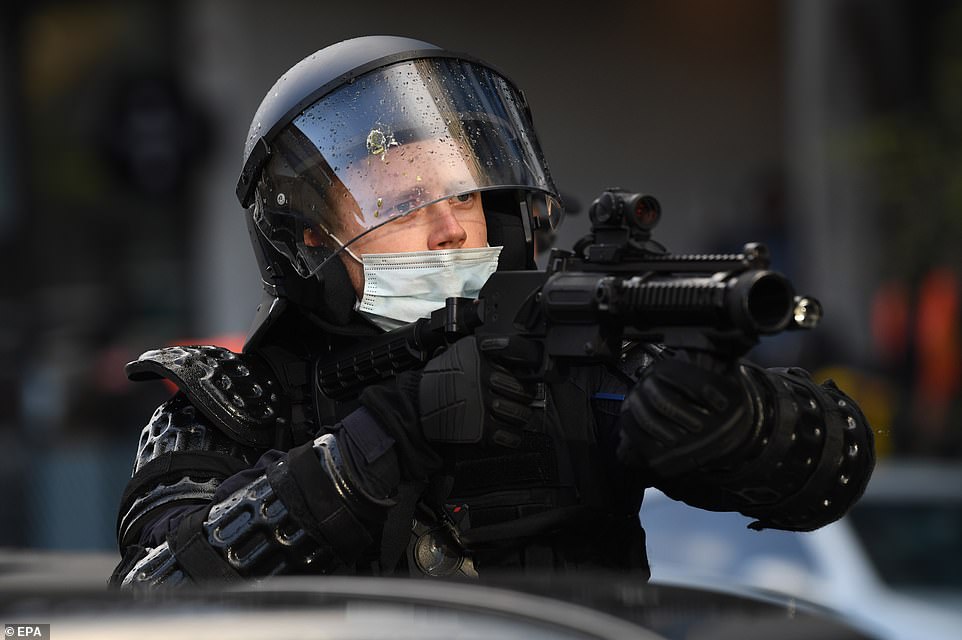 Furious protestors clashed with police (pictured) on Monday, with cops firing rubber bullets to try and control the rowdy crowds 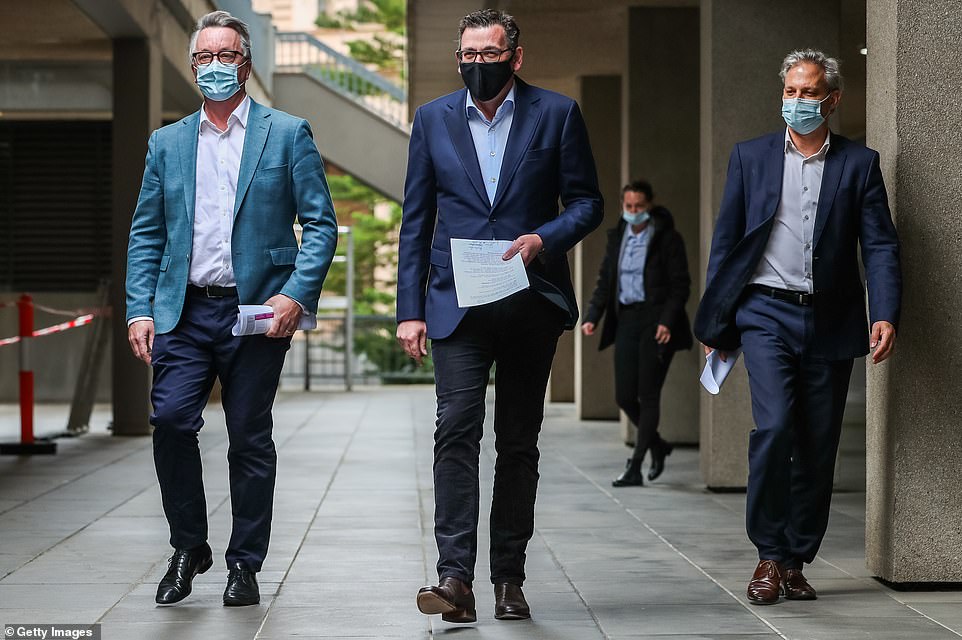 WHY HAVE VICTORIAN CONSTRUCTION SITES BEEN SHUT DOWN?

The Victorian government say the shutdown is needed as a ‘reset’, with Covid cases circulating on construction sites.

It claimed the extreme measures were needed to stop workers moving around Melbourne and beyond, reducing transmission as the industry has time to bring in the new Covid safety requirements.

Industry leaders were also told the violent protests on Monday showed why they had ‘significant safety concerns’ for the sector amid fears about ‘hostile’ workers.

A few critical projects will be exempt from the shutdown, with very small numbers of workers allowed to go to sites to check they are safe and secure.

Industrial Relations Minister Tim Pallas said: ‘We’ve been clear: if you don’t follow the rules, we won’t hesitate to take action – we have seen widespread noncompliance across the industry and that’s why we’re taking necessary steps to protect every single Victorian.’

‘We put the industry on notice just a week ago, we have seen appalling behaviour on site and on our streets, and now we’re acting decisively and without hesitation.’

The premier reportedly handed down the decision after an intervention from Brett Sutton on Monday morning, and told the industry earlier than planned after the violent protest.

There had been a pre-arranged 7pm meeting with constructions groups on Monday night, but given the escalating situation it was cancelled and replaced with a ‘very heated’ online meeting.

Around 500 workers in hi-vis vests had walked off the job and gathered outside the CFMEU head office on Elizabeth Street to protest against mandatory Covid-19 vaccine requirements, which were to come into effect later this week.

Shutting down the construction sector will cost about $455million a day and see 300,000 Victorians out of work, but officials believe it is the only course of action with so many cases linked to building sites and the lack of vaccine compliance from workers.

Skeleton crews will be allowed to go to construction sites to make sure they are safe and prevent any thefts.

One site in Melbourne’s east at Box Hill has been linked to at least 180 cases.

Fears construction sites were being superspreader events lead to a controversial decision to stop workers travelling between Melbourne and regional Victoria for work.

Construction workers were also to be required to show evidence that they’ve had their first dose of the Covid-19 vaccine from this Friday.

Tea rooms have already been shut and workers forced to eat lunch outdoors. 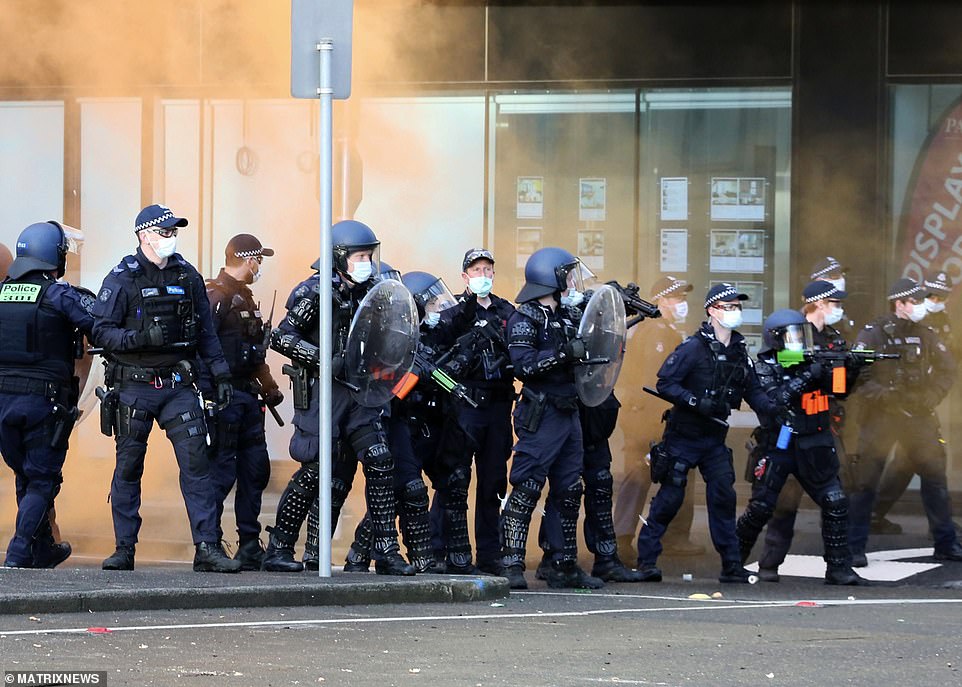 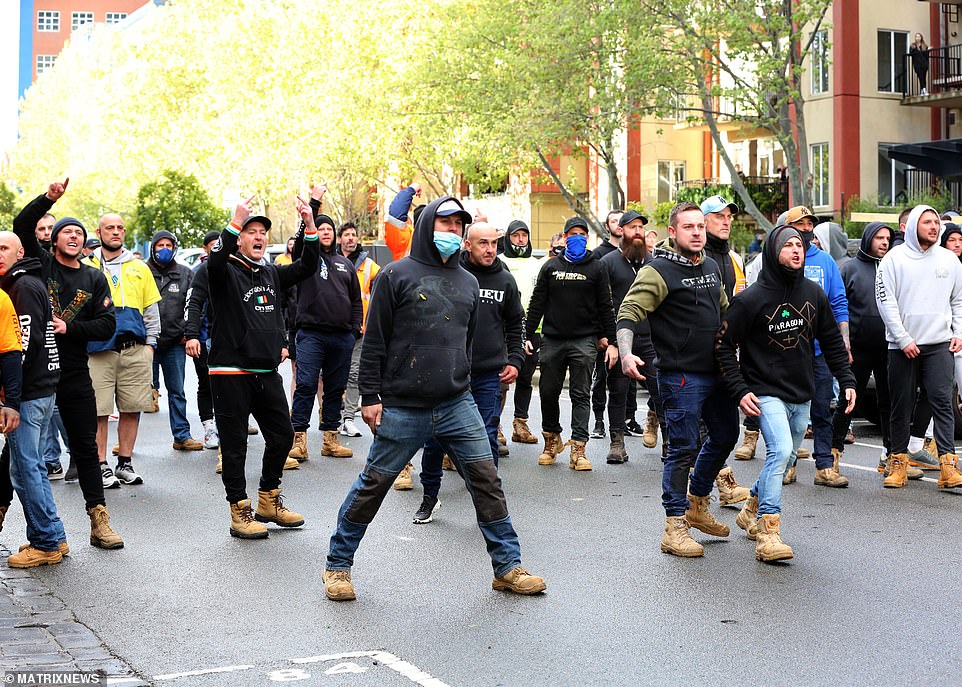 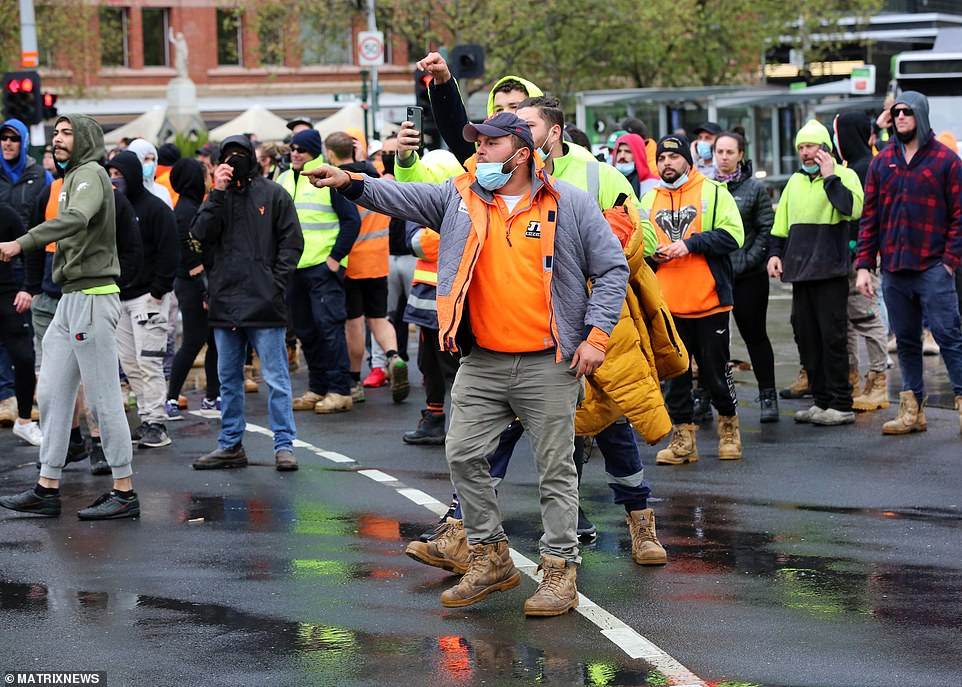 Protesters also turned against each other, with a number of fights breaking out within the crowd of bright orange and yellow

Construction workers must not cross the regional-metropolitan borders for work

In a joint statement, building unions had warned the government closing tearooms was ‘unworkable and too heavy-handed’.

They also warned the mandatory vaccination requirements were unfair and would likely be met with strong opposition.

‘This heavy-handed mandate by the chief health officer, which was implemented with no notice, has only served to drive many people towards the anti-vax movement,’ the statement read.

‘We have pointed out that these hastily written restrictions will lead to discontent, anger, and division within the industry, and we will continue to campaign against them.

With the warnings falling on deaf ears, Melbourne is now braced for an even larger protest on Tuesday.

Industrial relations minister Tim Pallas said the shutdown was in response to ‘widespread non-compliance’ in the construction sector.

‘We’ve been clear: if you don’t follow the rules, we won’t hesitate to take action – we have seen widespread noncompliance across the industry and that’s why we’re taking necessary steps to protect every single Victorian,’ he said.

‘We put the industry on notice just a week ago, we have seen appalling behaviour on site and on our streets, and now we’re acting decisively and without hesitation.’

In the shocking scenes on Monday, union boss John Sekta was mobbed by angry tradies after attempting to address the protesters outside his offices.

Flanked by union officials, Mr Setka, the longtime CFMEU state secretary, tried to reason with the furious group in front of him, with little success.

‘Please calm down, can you at least give me the respect to talk,’ he told protesters.

‘We’re not the enemy, I don’t know what you have heard. I have never ever said I support mandatory vaccination.’

But his pleas fell on deaf ears and was drowned out by protestors booing and shouting expletive-filled insults.

‘Dan Andrew’s b****,’ several could be heard chanting as scenes turned violent and Mr Sekta and other CFMEU officials were attacked before fleeing inside the office. 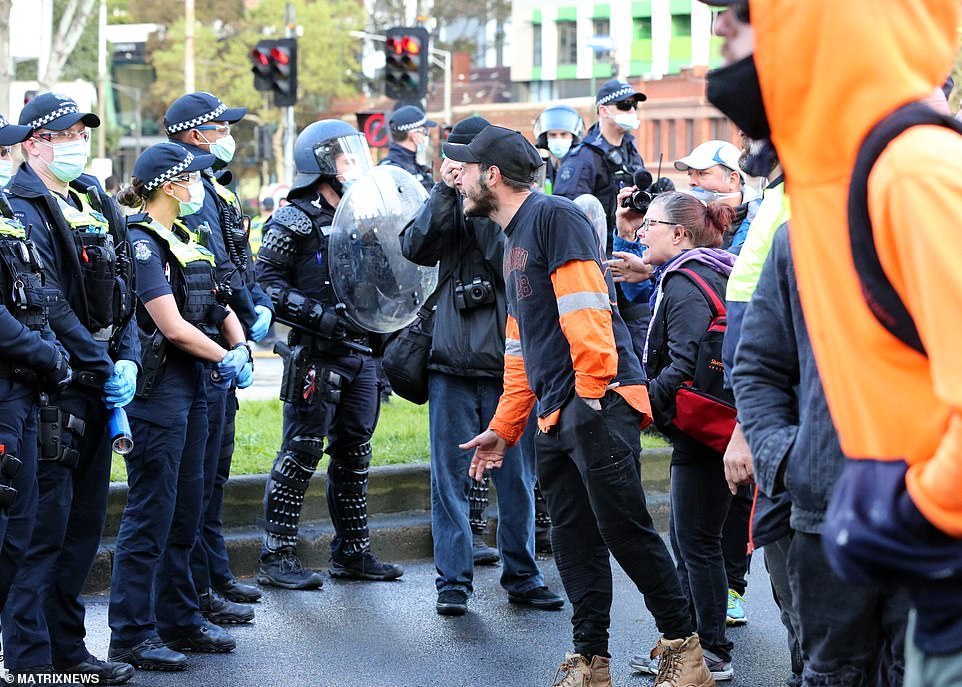 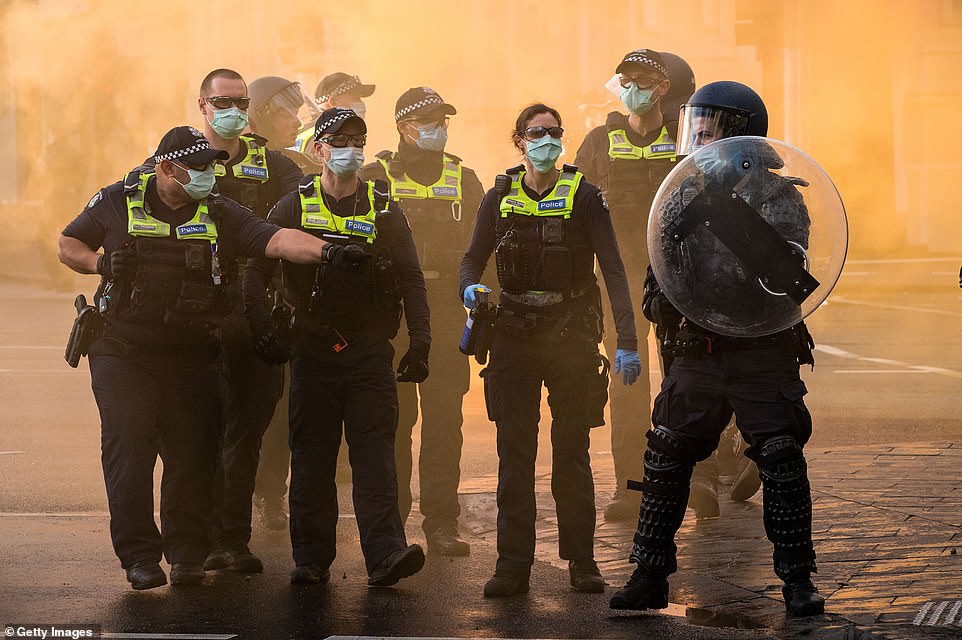 Protesters have vowed to descend on the CFMEU headquarters in Melbourne again on Tuesday morning (pictured, police at Monday’s rally) 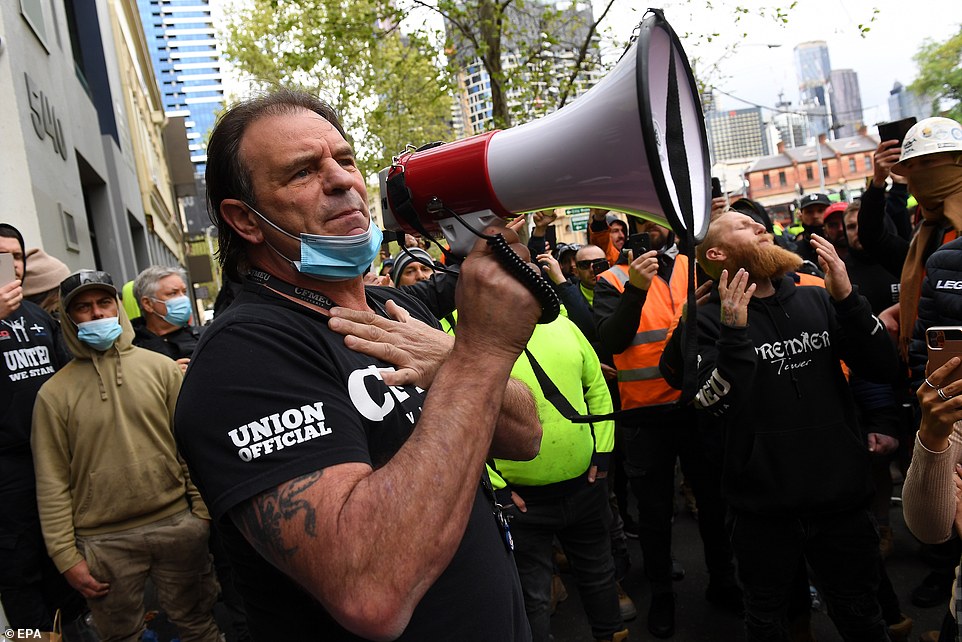 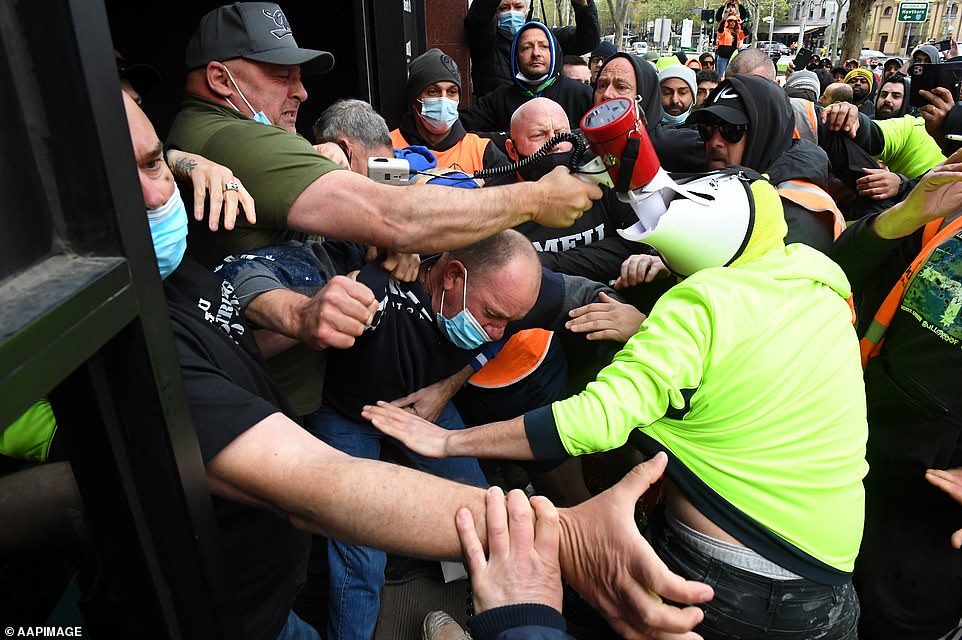 ‘Dan Andrew’s b****,’ several could be heard chanting as scenes turned violent and Mr Sekta and other CFMEU officials were attacked before fleeing inside the office

Carnage then ensued with rioters hurling projectiles at the building, smashing windows, kicking in glass, clashing with police and even punting a dog.

He later shared less than flattering views about the hundreds protesting and causing chaos in Melbourne.

‘They’re not really unionists, they’re just the scum of the earth as far as I’m concerned,’ Mr Setka told The Herald Sun.

‘Those drunken fascist un-Australian morons are the reason construction workers will be sitting at home and not getting paid for at least the next two weeks,’ Mr Setka said.

The union itself also released a strongly-worded email accusing ‘neo-Nazis’ of infiltrating and fuelling the rally that saw riot police attend and fire rubber bullets at attendees.

‘The CFMMEU condemns in the strongest possible terms the attack on the CFMEU Victorian Branch office and the mindless acts of violence perpetrated by members of the mob,’ the union said in a statement.

‘This crowd was heavily infiltrated by neo-Nazis and other right wing extremist groups and it is clear that a minority of those who participated were actual union members.’

In its statement, released just after 7pm, the union said it has always supported freedom of choice regarding vaccination and praised the work of police in subduing the situation. 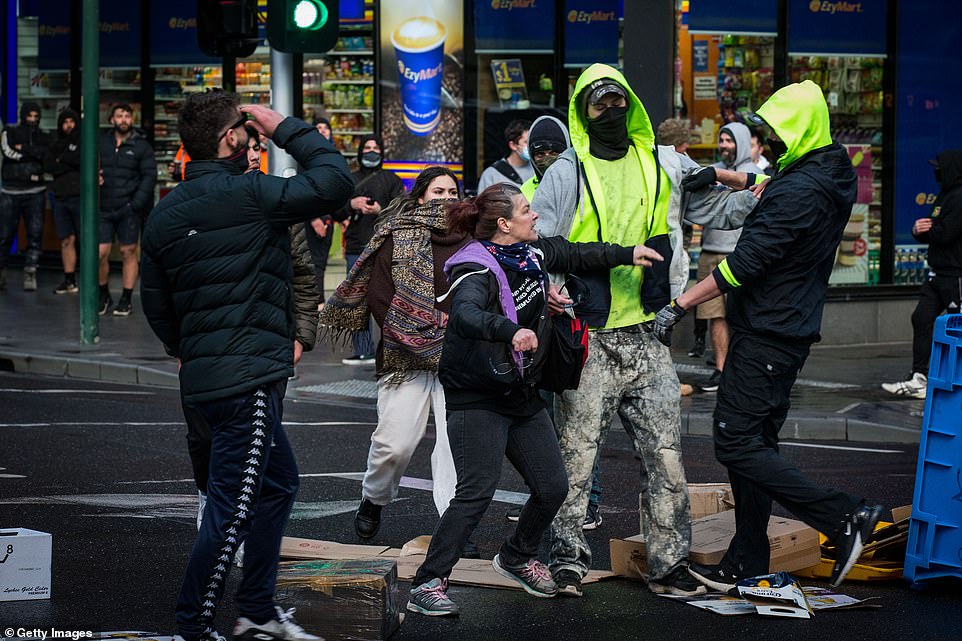 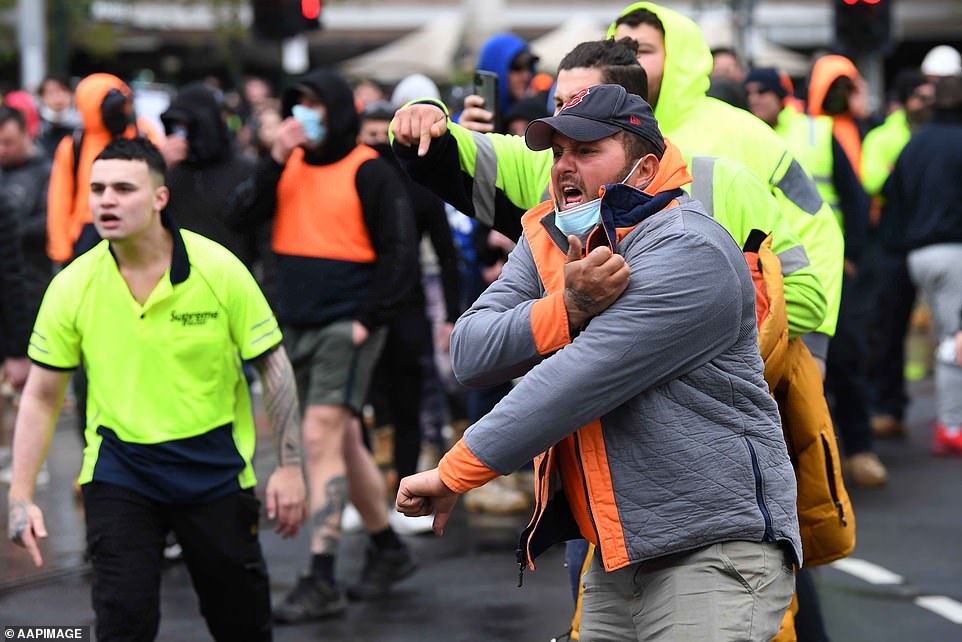 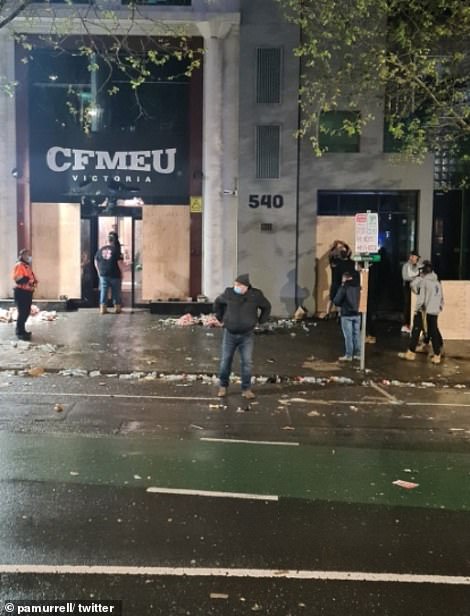 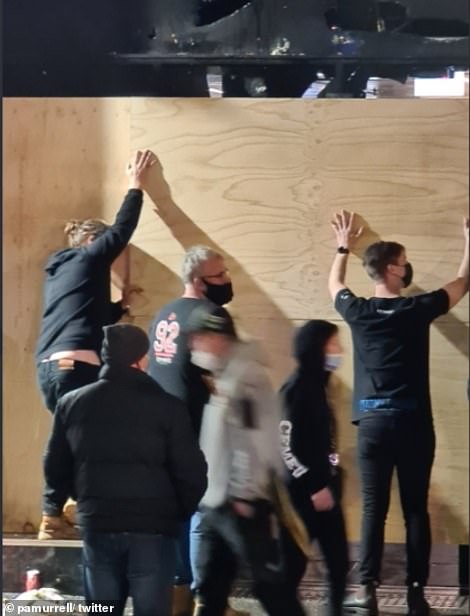 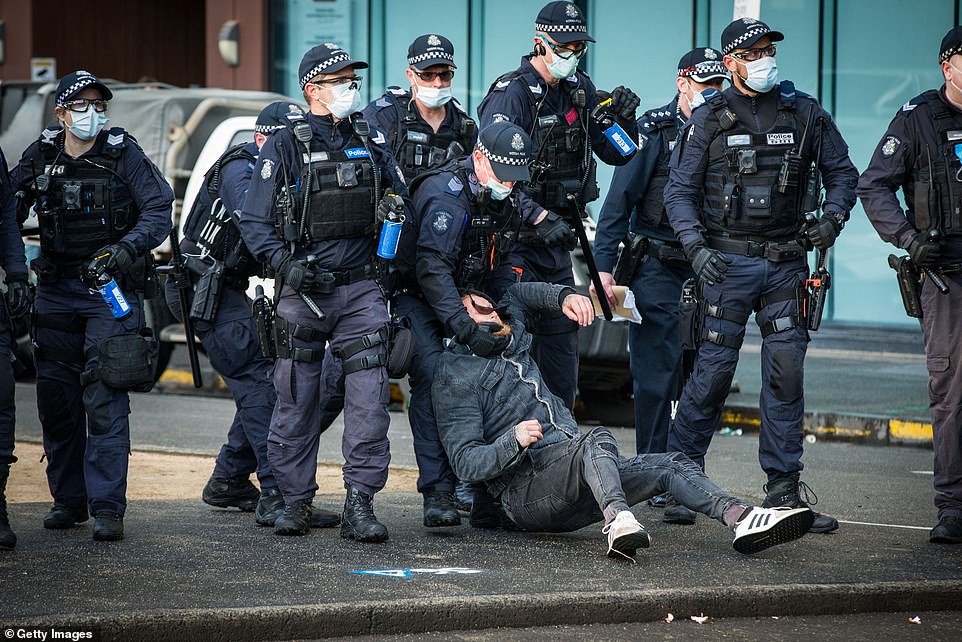 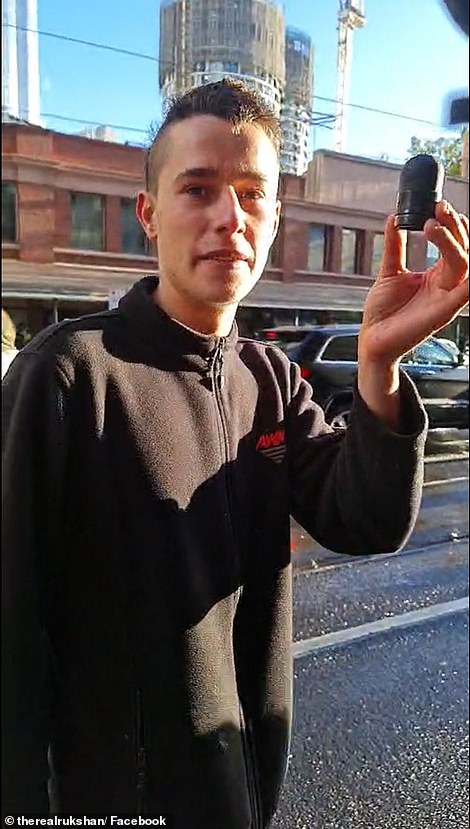 The union posted the statement to Facebook, but was immediately met by angry comments alleging they abandoned their members.

‘You should’ve marched with the brothers today,’ one person said.

‘You’re supposed to be supporting your workers clearly you’re not doing your jobs properly how about u listen to your workers and not bow down to these so call governments not run and hide u wonder why people revolt,’ another commented.

It was the second ugly riot in two days for Melbourne as workers waged war on state officials, law enforcement and even their own union representatives.

Images from Monday night show some CFMEU workers boarding up the windows of the union’s HQ to cover the extensive damage and prevent further destruction.

Protesters also turned against each other, with a number of small fights breaking out within the crowd of bright orange and yellow.

The chaotic scenes were sparked by a message sent to the ‘Vic Freedom Movement Event’ group on a social messaging app urging workers to attend CFMEU headquarters to ‘support freedom of choice’.

‘Send a message that your unions will lose your support if they comply with these measures that defy personal choices for medical decisions,’ the message reads.

One participant live-steaming the event described it as a peaceful protest.

‘We’re doing what has historically been done by workers,’ he said. 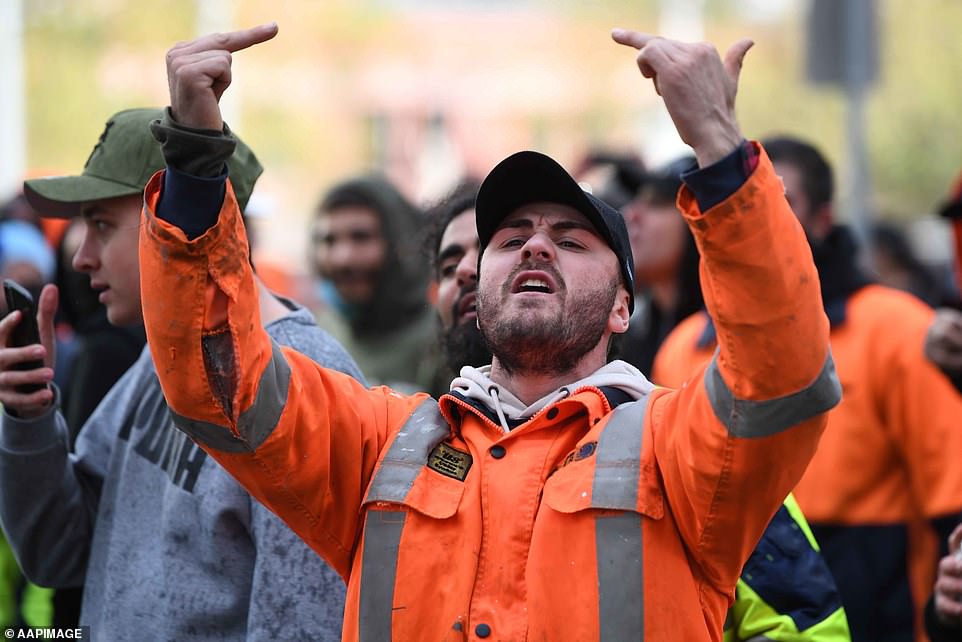 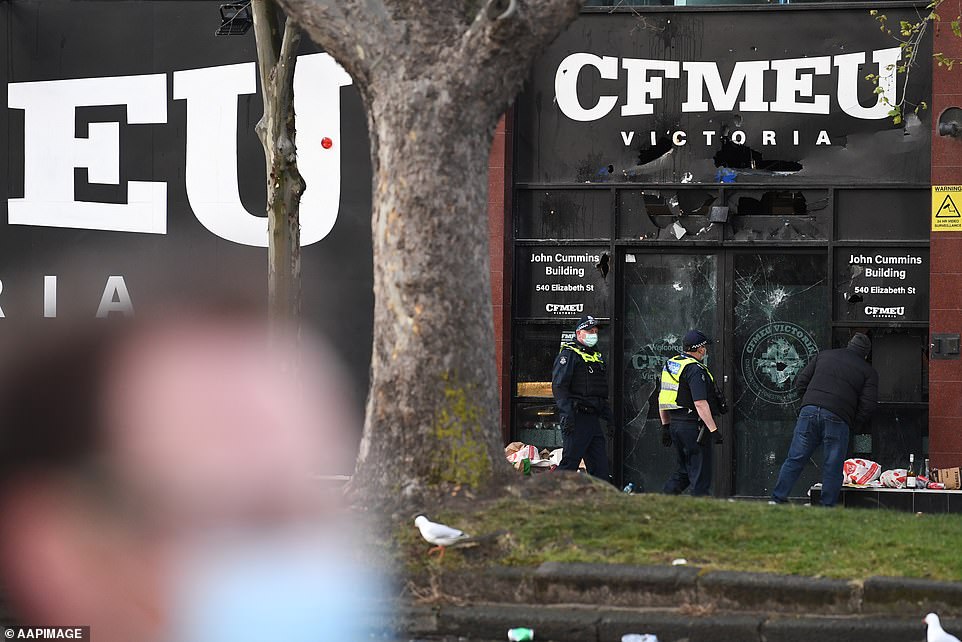 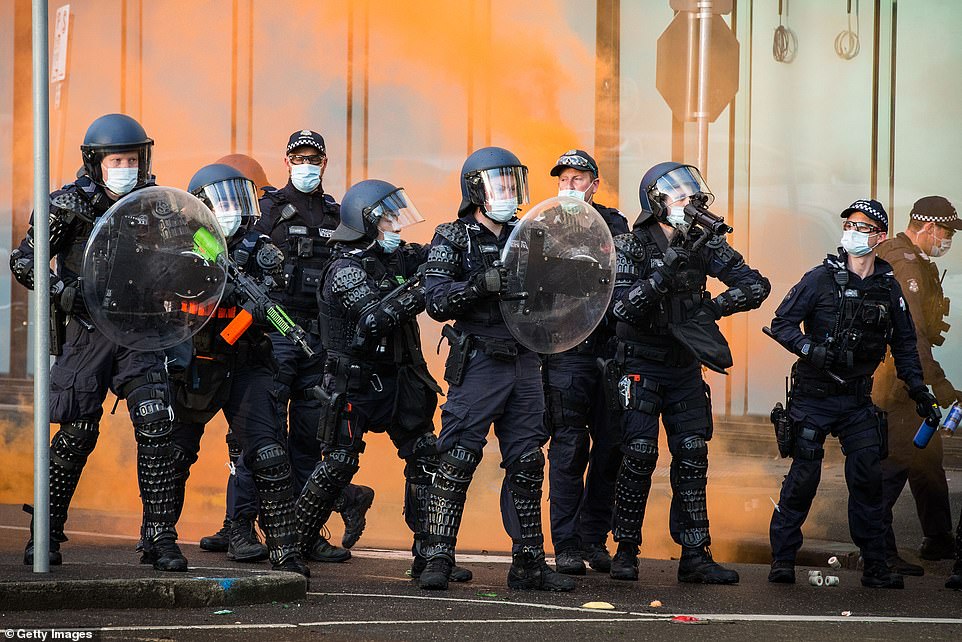