Melbourne has been placed on high alert with a severe thunderstorm set to strike the city, bringing heavy rain.

The BOM issued an alert at 2.39pm on Monday warning that severe, slow-moving thunderstorms had been detected on the weather radar near Essendon and Footscray in the city’s north.

The storms are forecast to hit Broadmeadows, Coburg and Fawkner by 3:10pm and Craigieburn and Tullamarine by 3:40pm, the warning said.

‘Heavy rainfall that may lead to flash flooding is likely,’ a statement said.

Slow-moving thunderstorms are set to strike Melbourne imminently, according to the Bureau of Meteorology 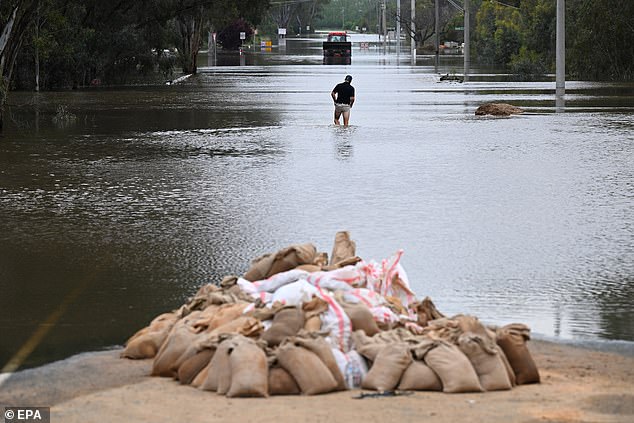 The city and parts of Victoria have already been battered by neverending rainfall in recent weeks, leaving much of the state submerged in flood waters (pictured in Echuca last month)

Severe thunderstorm warnings have also been issued for those living in Central and East Gippsland.

Those in the areas have been told to brace for heavy rain with flash flooding possible.

The city and parts of Victoria have already been battered by neverending rainfall in recent weeks, leaving much of the state submerged in flood waters.

As of midday on Monday several minor flood warnings still remain for areas like the Campaspe River and Goulburn River.

Northern parts of Victoria such as Shepparton and Echuca were some of the worst affected during flooding in recent weeks, with thousands told to evacuate.

But in some good news, the Bureau of Meteorology has confirmed La Nina – the weather phenomenon creating wet conditions – will weaken in early 2023, with the Indian Ocean Dipole ‘rapidly decaying’ in late spring.