Driver captures furious road rage incident on camera as grumpy dad unleashes: ‘I swear if my kids weren’t in the car I’d break your nose’

A frightened passenger has captured the moment a furious driver threatened to break her boyfriend’s nose after they were embroiled in a road rage incident.

Lily Bradley, 22, claimed the aggressive man approached her and her partner, Alex Christodoulou, after they failed to indicate while merging in the busy Burnley Tunnel, in central Melbourne.

Ms Bradley uploaded a video of the man screaming at the couple through their car window on Monday, claiming he had ‘pushed (them) into a work site’.

‘Don’t look at me like that because I’ll break your nose in c***.

‘These cars can beep all day.

Throughout the video, Mr Christodoulou tried to calm and apologise to the man.

The driver left after other frustrated motorists yelled out to him for holding up traffic.

In the comments under the video, Ms Bradley said she was ‘still terrified’ from the incident but managed to get the man’s licence plate number.

‘I’ve got his rego but unsure what to do,’ she said.

‘Everyone’s saying take it to the cops.

‘We were terrified, you heard what this guy was saying.’

However, commenters were determined she should report the driver. 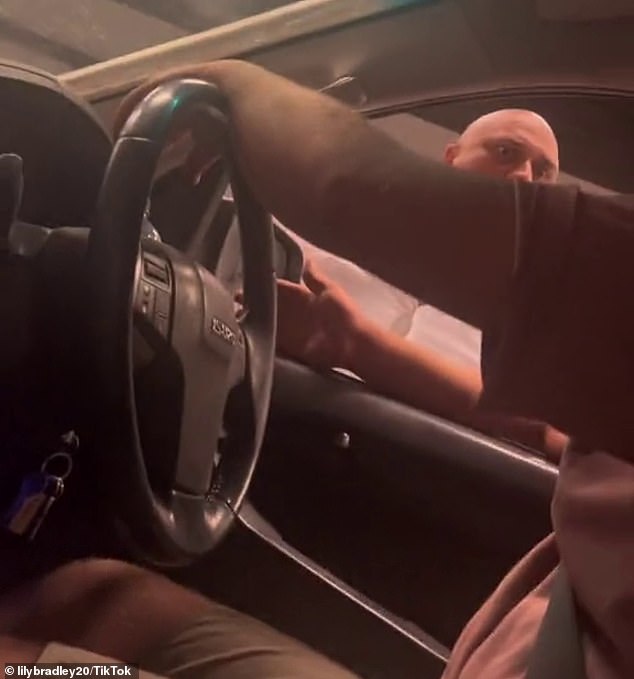 ‘Take it to the cops to have on file,’ one person suggested.

‘Irrespective of who did what he cannot allegedly threaten you like this,’ another said.

‘Definitely take it to the cops … Hope you guys are okay,’ a third wrote.

Other commenters applauded Mr Christodoulou for remaining calm throughout the exchange.

‘Kudos to your partner for handling it so well,’ one said.