Woops! Car crashes through a barrier and is left dangling by its rear wheels in a spectacular parking fail

A 46-year-old driver has crashed his car through a barrier in an apartment complex car park, leaving the vehicle wedged and hanging by its rear wheels.

Emergency services were called to the car park on Queens Road, Melbourne, at 8pm on Wednesday.

Images showed the vehicle had crashed through the metal barrier, fell two metres and smashed into the side of the building.

Emergency services were called to the car park on Queens Road, Melbourne, at 8pm on Wednesday

The vehicle was left stuck between the first-storey and the ground level.

The car, which had its front doors open, was hanging by the axle of its back wheels.

The driver was lucky to escape without injury and was not trapped inside the car.

Port Phillip’s SES unit is working to remove the vehicle but need an engineer to ascertain whether a crane can enter the first floor of the car park in a stable manner.

The only damage to the building was a smashed window.

The investigation into the incident is ongoing. 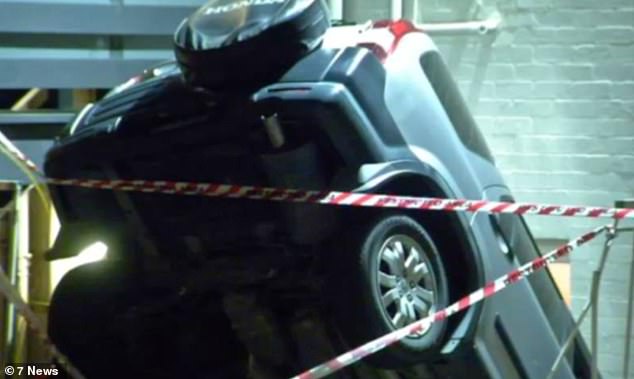