Melbourne Cup-winning  jockey Mark Zahra has revealed how he was drinking heavily in the depths of despair after being suspended and missing out on the winning Cup ride a year ago.

Zahra, 40, was banned from steering 2021 Melbourne Cup winner Verry Elleegant to glory after he was suspended for three months over the notorious AirBNB Covid party scandal.

Instead, he watched the race from Byron Bay – and admits he was told he was drinking too much as he drowned his sorrows.

But he redeemed himself on Tuesday when he guided Gold Trip to victory in Australia’s biggest race.

‘This time last year in Byron Bay, I was getting told off for drinking too much and [Verry Elleegant] could have been my ride,’ he admitted after the win.

‘Redemption day today. Just a miracle. 12 months ago, I felt terrible and probably drinking my way out of it and [my wife] was saying, “don’t drink too much”.

‘I said, “What do you want me to do? My horse just won the Melbourne Cup!”

Zahra was banned for three months for lying to stewards and being at an illicit party in Victoria’s Mornington Pensinsula along with several other jockeys.

He was the fifth jockey to be banned for breaching Covid restrictions at the party in August 2021, costing him his ride on Verry Elleegant at Flemington, which was given to winning jockey James Macdonald instead.

They were caught after police were called to the AirBnB home at 11.50pm on a Saturday night after a noise complaint from a neighbour, in breach of Victoria’s 9pm Covid curfew which was in place at the time. 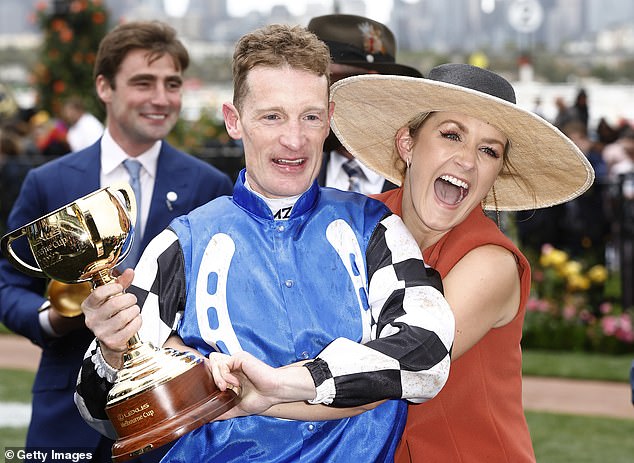 Mark Zahra, 40, (pictured celebrating his win with his wife Elyse) missed steering 2021 Melbourne Cup winner Verry Elleegant to glory after he was suspended for three months over the notorious AirBNB Covid party scandal

Emotional Zahra twice let fly an F-bomb live on air while he was being interviewed moments after his Cup win and celebrating with his overjoyed wife Elyse.

‘The last 50m I was thinking, f***, I’m going to win this!’ the father of one year old daughter Harper let slip on Ten’s TV coverage.

”[I was thinking] just p*** off, no one come near me. It just went forever the last bit. And I still can’t believe it. Melbourne Cup, it’s unbelievable.

‘I literally thought I’m a bit far back here but my one plan was not to be too close because I thought if I spent fuel early I’d be a bit late.

‘As they jammed up, I got to travel up and up and I thought I’m still travelling so good here. I waited and waited and with the horse, I’ve always said when you go, you’ve got to go. F*** I was righto.

‘It’s just amazing. It’s going to be a good night.’

He added: I feel like crying. It’s unbelievable. What a day.

‘He’s a horse that when you go, you don’t give him a chance to think about it. I was hoping no-one would come near me.

‘It was just elation when I crossed the line.’

Delighted wife Elyse interrupted the post-race interview to reveal her husband’s winning philosophy behind the victory.

‘We’re not doing seconds anymore he said this week,’ she said. ‘No more seconds.’ 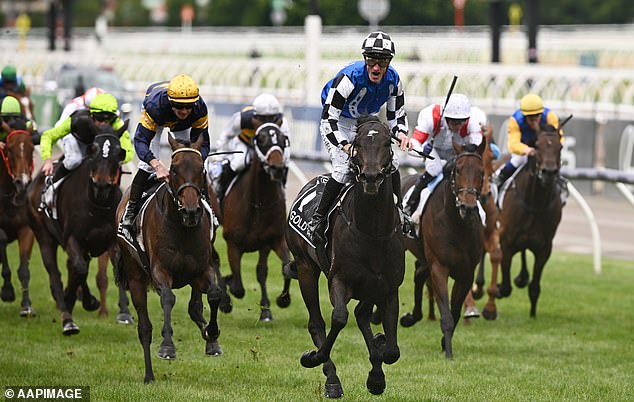 The  52kg jockey – who has more than 1300 race wins, worth $90million-plus, to his name, including 23 Group One wins – paid tribute to his grandfather for getting him into the sport.

‘Probably got to thank my grandfather who was a mad punter and used to bring me and my two brothers along to the races,’ he revealed.

‘I got a bit of a bug – I wasn’t bad at school but had trouble paying attention and behaving.

‘I decided to leave in Year 10 and decided I should come over and do three months [apprenticeship] – and I never left.

‘I have to shout out to Mum, Dad, and all back in Western Australia. If they haven’t had a heart attack, they’d be going crazy right now.

‘I’m sure they’re having a shindig somewhere and drinking lots of champagne. Drink some for me.’