Gold Trip has stormed home to win the 2022 Melbourne Cup at Flemington in a gut-busting, furious sprint to the finish line.

The Maher and Eustace import ran a close second at the Caulfield Cup and went one better to claim Australia’s greatest race.

It was also redemption for jockey Mark Zahra who was forced to sit back and watch his ride Verry Elleegant win the Melbourne Cup while he sat out suspended for breaches of Covid regulations.

’12 months ago I felt terrible and [was] probably drinking my way out of it,’ he admitted.

‘[My wife] was saying don’t drink too much, I said ‘what do you want me to do? My horse just won the Melbourne Cup’.

Gold Trip gets redemption after finishing second in the Cox Plate, storming home to win the Melbourne Cup by two lengths

He admitted the final stages down the stretch were nerve-wracking.

‘The last 50m I was thinking I’m going to win this. It just went forever the last bit. And I still can’t believe it. Melbourne Cup, it’s unbelievable.’

Co-trainer David Eustace said it was redemption for the whole team that were left ‘gutted’ after the Caulfield Cup heartbreak.

‘This horse who was so unlucky in the Caulfield Cup and so gutted when he got beat. And I thought he would get beat again. It’s just quite incredible,’ he said. 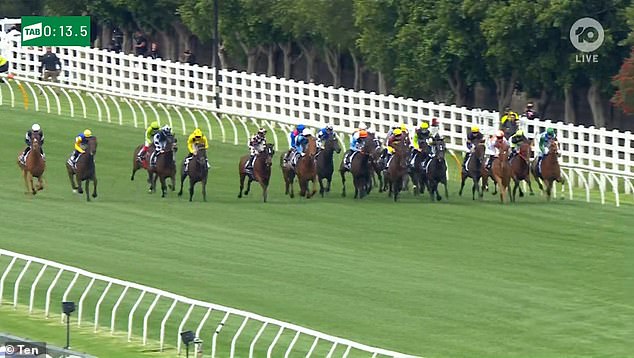 Gold Trip emerged with the best turn of pace at the end of the endurance race to win by over two lengths ahead of Emissary and High Emocean with favourite Deauville Legend failing to make the placings.

Jockey Mark Zahra said he just let Gold Trip go down the stretch and struggled to put the emotion of the win into words.

‘I can’t. I feel like crying. It’s unbelievable. What a day,’ he said.

‘He’s a horse that when you go, you don’t give him a chance to think about it. I was hoping no-one would come near he. It’s just elation when I crossed the line,’ he said.

‘Mum used to give us the day off so I could watch it. It’s surreal.

‘My wife is here. And all the folks back in Western Australia, what an amazing feeling.’

There was redemption for the jockey as well, with Zahra forced to sit out the last Melbourne Cup through suspension.

‘This time last year in Byron Bay and I was getting told off for drinking too much and it could have been my ride. Redemption day today. Just a miracle,’ he said.

Trainer Ciaron Maher said it was a ‘fantastic effort’ from the whole team to prep the horse for the perfect race on Melbourne Cup day.

‘This horse is quite dicey and he’s done a fantastic job. And to run in three of the big ones and have him present in the Cup like that was fantastic,’ he said.

‘We had a plan going out, Mark. He was very good on him in the Caulfield Cup. We just wanted to wait, wait, wait and we know he got that good turn of foot. He was fantastic.’

Earlier on race day, a self-admitted ‘problem gambler’ broke into Flemington racecourse to pour an oily substance on the track.

Alarming footage showed at least two people running onto the famous track at about 6am on Tuesday to spray a dark liquid over the course in apparent protest against the Victoria Racing Club.

The substance has not officially been identified but was labelled ‘oily’. One person has surrendered themselves to police.

The VRC confirmed officials cleaned a section of the track around the 1500 mark on Tuesday morning and said it was safe for the race to continue.

A statement issued by the protester cited as motivation the building of a wall which was designed to keep potential floodwaters from the neighbouring Maribyrnong River from getting into the racecourse and damaging the turf.

Some local residents had been angered by the construction of the wall, saying it diverted water toward their homes and increased the likelihood of future floodwaters inundating their streets.

Later on race day, climate change protesters descended on the Cup, using a van to block a main road outside the track while they stood on its roof and screamed at punters.

Protesters on the roof were filmed by a fellow activist yelling at people walking into Flemington Racecourse.

‘Eat your pheasant, drink your wine, your days are numbered, bourgeois swine,’ the protester on the roof could be heard yelling.