Racing pundits are flocking to put their bets on Deauville Legend to claim victory in this year’s Melbourne Cup after a dream barrier draw at the weekend.

The four-day Melbourne Cup Carnival got underway on Saturday with Derby Day and will conclude with the 3,200m ‘race that stops the nation’ at Flemington on Tuesday at 3pm AEDT.

The winner of the 2022 Melbourne Cup will take home $7,750,000 in prize money, with experts widely backing the James Ferguson-trained Deauville Legend to claim Cup glory after drawing barrier nine on Saturday evening.

The English trainer said he couldn’t have picked a better gate number.

‘With the pace being on the outside they are going to go some clip to get there.

‘Ideally we can get into a nice position early doors and we don’t have to work too hard to get there either.’

She was joined by Eddie Maguire who recently signed a new deal with the network.

Cumani, who also presents for ITV Racing in the UK, is back to jet-setting after she welcomed her second child Teddy George in June –  her first child with boyfriend Max Johnson.

While Scott Gullan from the Herald Sun likes another UK stayer, Without a Flight. 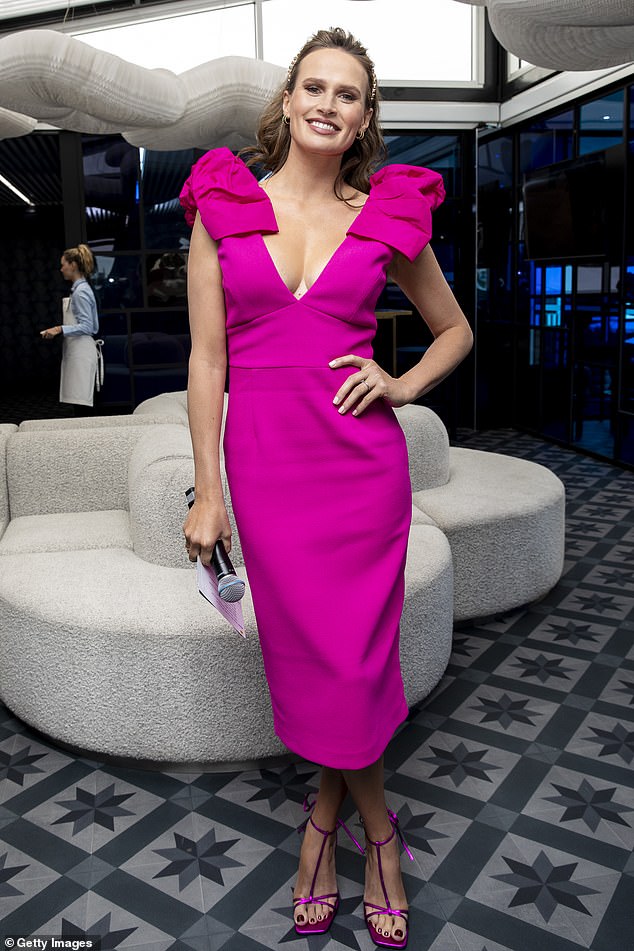 ‘I’d like him to get a nice piece of cover so he relaxes well and he’ll travel strongly,’ he said.

Deauville Legend is currently offering $3.60 for the win and $1.80 for a place by TAB’s fixed odds market as of midday Sunday.

But the Melbourne Cup will be untested ground for Deauville Legend having never raced beyond 2615m and never on a soft or heavy track.

A capacity field has accepted for the race, with the connections of 24 runners paying up by Saturday’s deadline. 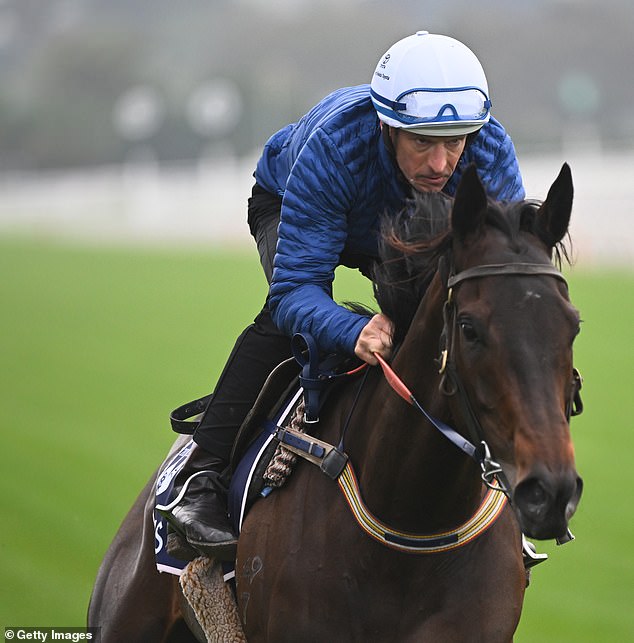 German stayer Loft was another favourite but pulled out on Friday due to a tendon issue.

Montefilia, Without A Fight and the Gai Waterhouse trained Hoo Ya Mal share the second line of betting after they drew gates 11, 18 and 15 respectively.

The 2019 Melbourne Cup winner Vow And Declare will start from barrier four.

Grand Promenade, one of five runners for Ciaron Maher and David Eustace, has the inside gate.

Knights Order has drawn the widest of the 24 starters. 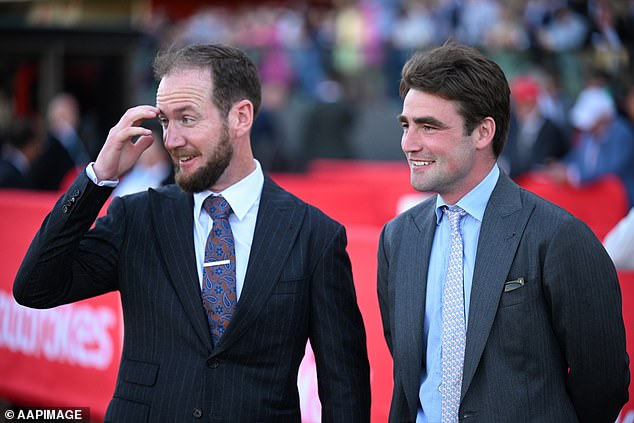 Trainers Ciaron Maher and David Eustace (pictured) after Bella Nipotina won in race 11, the Ladbrokes Manikato Stakes, during Cox Plate Day at the Moonee Valley Racecourse in Melbourne on October 22 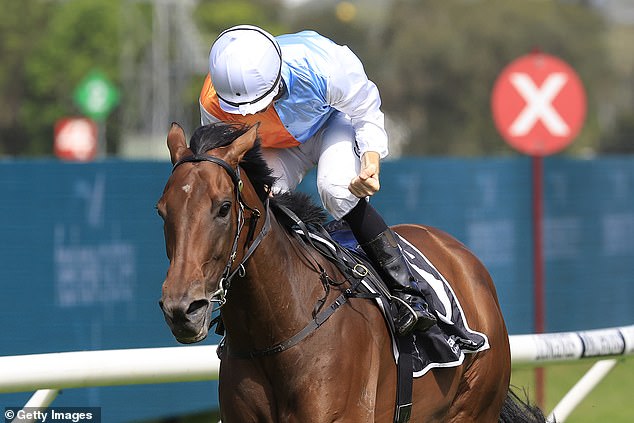 Of the qualifiers, a return to the form that carried him to an Epsom Derby victory has given imported stayer Serpentine a Melbourne Cup lifeline.

Needing to run in the top-three placings in the Archer Stakes at Flemington, Serpentine finished second to Surefire after leading a depleted field.

He drew barrier 23 on Sunday.

Surefire isn’t among the entries for Tuesday’s $8 million race. 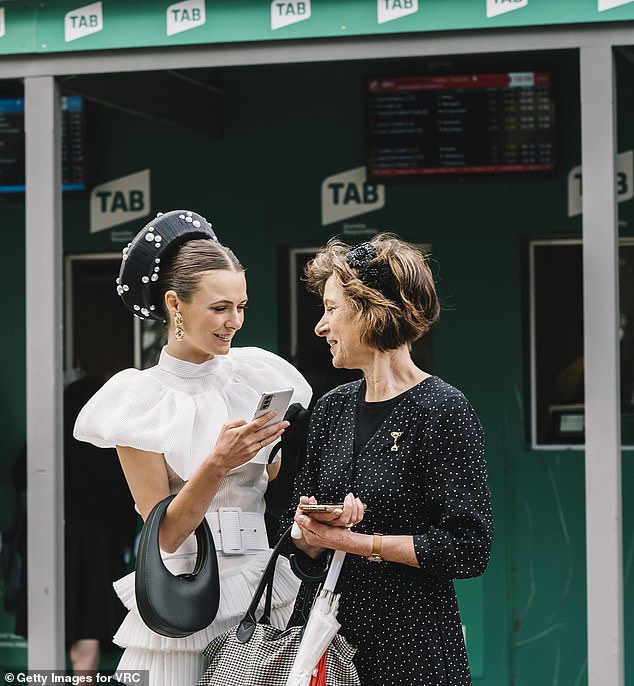 The Archer Stakes served as the final qualifying race for Tuesday’s Melbourne Cup but only seven runners lined up on Victoria Derby day.

Serpentine had finished among the tailenders in four Australian starts for a syndicate of high-powered owners led by seven-time Melbourne Cup-winning owner Lloyd Williams.

He seemed a shadow of the horse that landed the 2020 Epsom Derby for champion Irish trainer Aidan O’Brien.

But even in defeat on Saturday, Williams’s son Nick said there were encouraging signs to allow Serpentine to join stablemate Point Nepean in the Melbourne Cup after passing a ballot clause.

‘We’ll accept (in the Cup) for sure. It was a much-improved run today,’ he said.

‘From that run you’d say further the better so we will accept with him and see how we go.’ 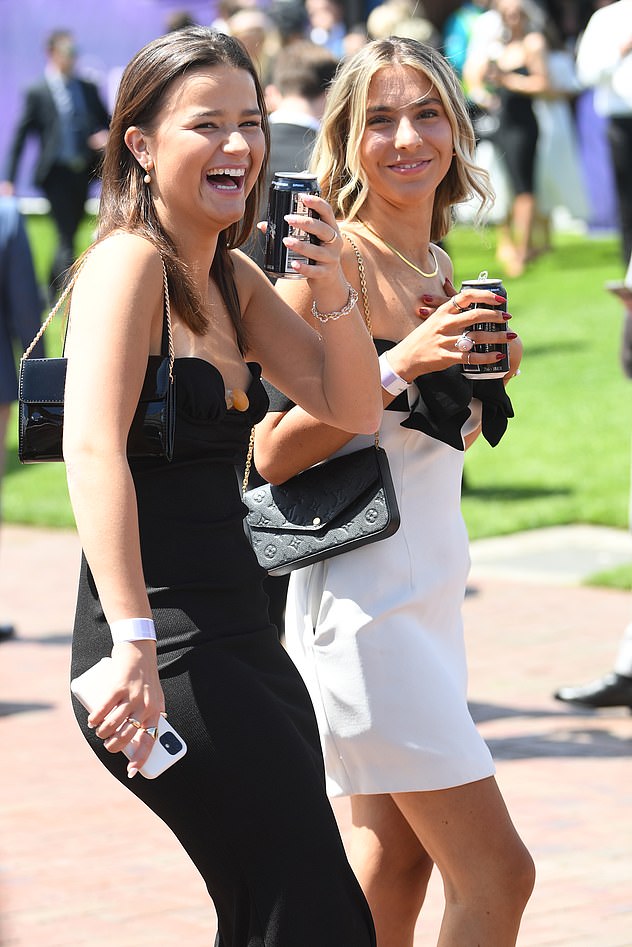 Off and racing: The sun was shining early on Saturday as Derby Day crowds flocked to Flemington for the start of the Melbourne Cup Carnival (pictured)

The world’s best-known thoroughbred operation has, however, resigned itself to not having a Melbourne Cup runner.

But the stayer failed, finishing sixth of the seven runners – almost eight lengths from the winner.

The Archer Stakes, run at Group Three level over 2500m, has lost its significance as a Melbourne Cup guide since Shocking completed the double in 2009.