A terminally ill mother who went home to Ireland after she was given months to live says she has been ‘robbed’ by its shambolic health system and would have been better off staying in Australia.

Meabh Feerick, 25, spent five years working as a bar manager in Sydney’s inner-west before she was diagnosed with incurable genetic skin cancer in December 2020 after finding a lump on the back of her scalp.

Desperate to spend the last days of her life surrounded by friends and family, she took her son Noah, three, and moved back to Mayo in Ireland’s west.

Doctors say she has just three to five months, but Ms Feerick told Daily Mail Australia she feels ‘massively let down’ and robbed of the time she has left by a failing system crippled by staff shortages, lengthy wait times, and a lack of communication. 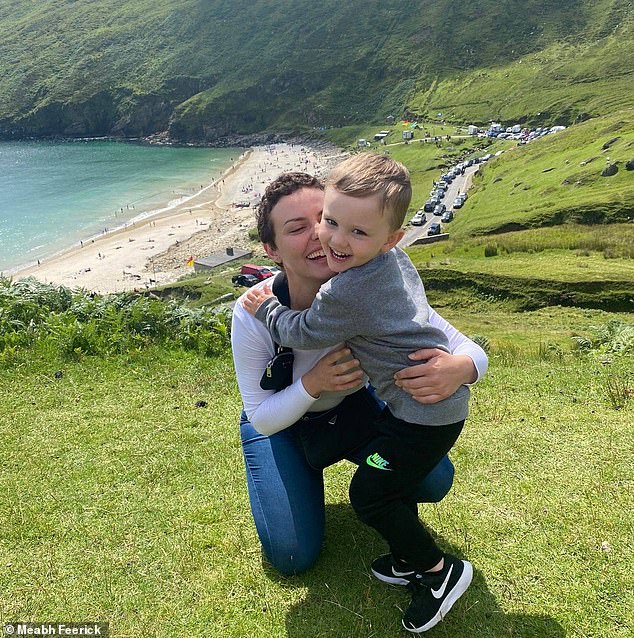 Desperate to spend the last days of her life surrounded by friends and family, Ms Feerick took her son Noah, three, and moved back to Mayo in Ireland’s west

‘It’s been a massive let down, I feel so out of the loop in my own cancer journey because I have no idea what’s going on in my body,’ she said.

Ms Feerick, who has been told she can no longer receive radiation because it could cause a break in her vertebrae, said the biggest difference in care is the ‘lack of urgency’ in Ireland.

‘Patients that have very little time left are waiting, waiting for everything,’ she explained.

‘Scans, results, treatment delays, surgery, the wait times are crazy. It’s just so sad to think that if things were treated with more urgency, people might get more time with their loved ones and maybe better quality of life too.’ 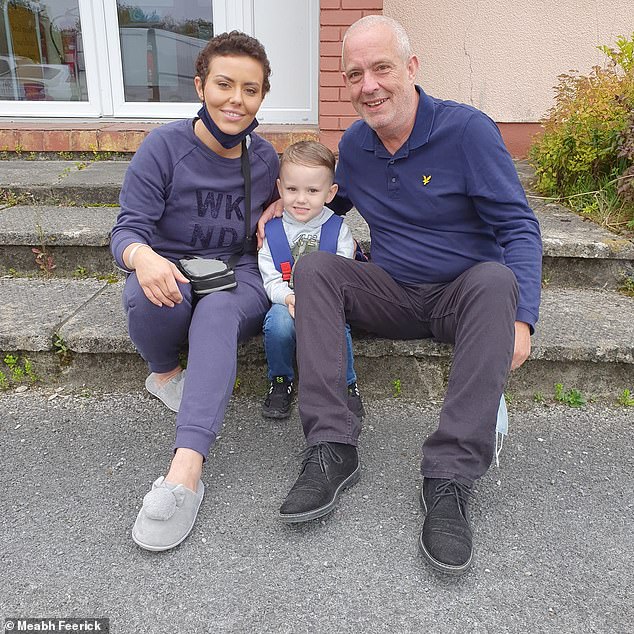 Ms Feerick brought scans home on a USB stick but doctors were unable to access the device due a catastrophic cyberattack that crippled Irish systems for months.

This meant they could not assess how quickly her cancer was progressing.

Ms Feerick spoke of healthcare workers stretched paper thin across Ireland’s major hospitals, where patients with different illnesses are thrown in the same room, increasing the risk of infections such as the notorious super bug, MRSA.

‘There’s far too little staff to manage and treat patients on a compassionate level,’ she said.

‘They’re rushing between patients. In Australia I was seen immediately and prioritised when admission was needed through emergency. At home, I’ve waited almost nine hours on a trolley.’ 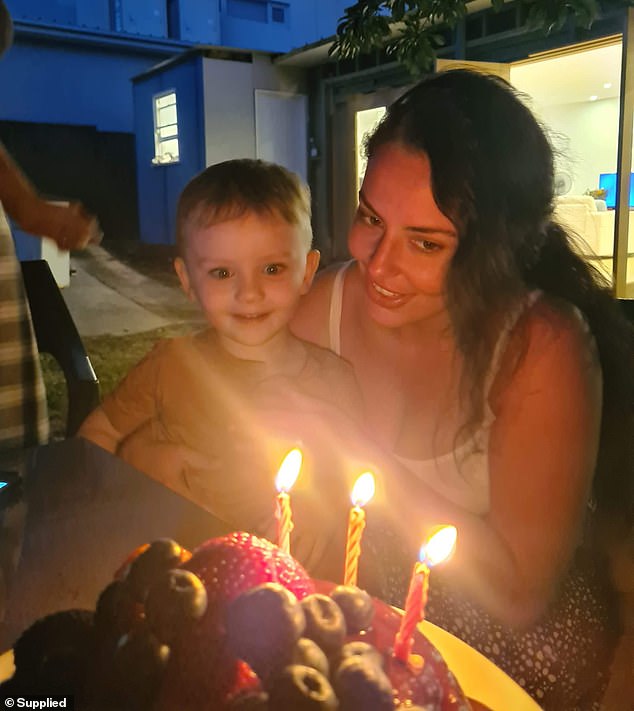 The brave mum says she is speaking out because she wants to do whatever she can to ensure the system is changed before her son grows up.

‘I feel robbed, and Noah as well – he’s being robbed of a lot,’ she said. ‘I want him to know that his mother stood up to this and said it’s not good enough.’

She hopes he will understand how much she fought to be there for him and says she has written letters from her hospital bed so he will remember who his mother was.

‘I want him to be proud of how much I fought to be here with him and make the most of every minute I get to spend with him. I want him to know this was all for him. I don’t want him ever in this system,’ she added. 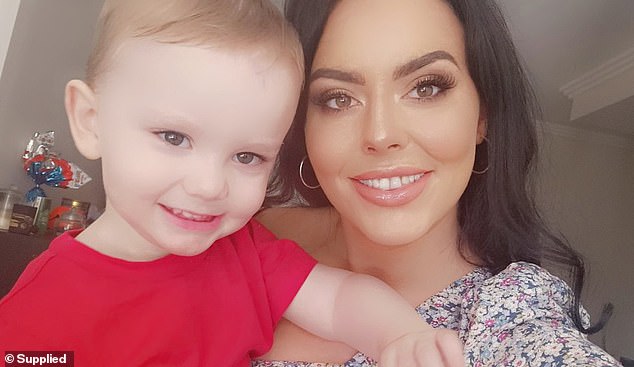 Ms Feerick stressed that Ireland’s problems stem from a broader systemic issue, which includes glaring discrepancies between wages and the cost of living, and an ongoing housing crisis that leaves graduates little choice but to emigrate.

‘I do not for a second want nurses, healthcare assistants and other medical staff to be looked at badly here,’ she said.

‘They are not the issue, they are doing everything they can. The problem is the system we are in and all the errors in that.

‘We are losing our medical professionals to other countries willing to treat them better, where they have proper hospitals and systems.’

She had nothing but praise for the dedicated workers who have cared for her since her return, saying: ‘I want to thank the staff who have looked after me and treated me. I’m here and still fighting for hopefully a long time.’ 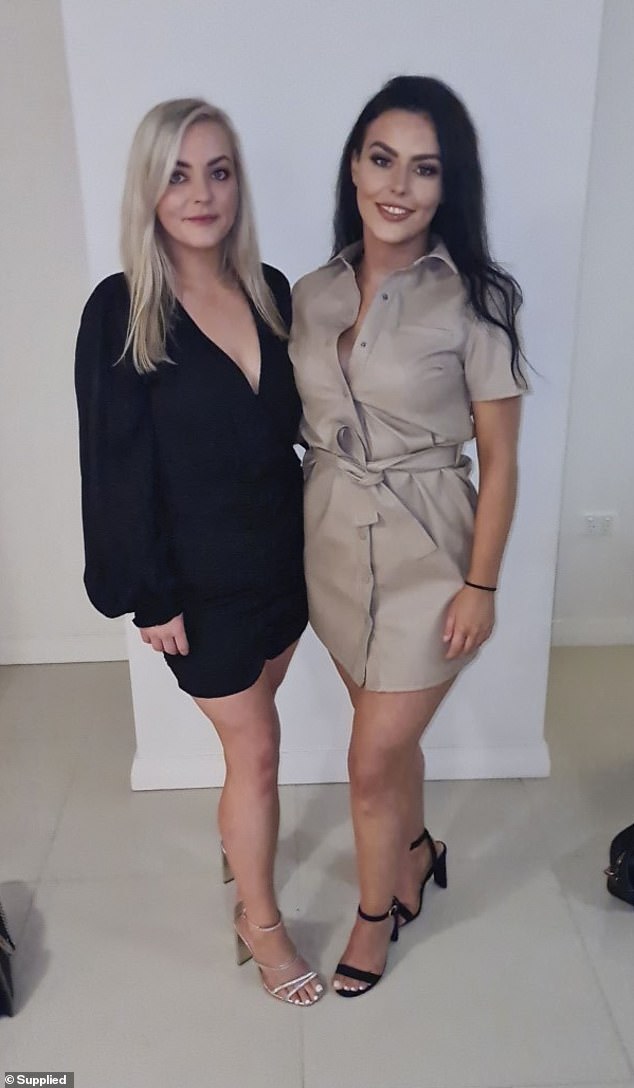 The bar manager (right, with sister Aisling) had nothing but praise for Irish healthcare workers, insisting the problem lies squarely with the system

Ms Feerick insists she felt perfectly healthy and did not experience a single symptom until she was diagnosed with terminal cancer last year.

She saw a doctor about the growth ‘at least five or six times’ since discovering it in 2019, but was repeatedly assured it was nothing more than a wart or cyst, even when it grew and became painful to touch.

Unconvinced by the dismissals, Ms Feerick pushed for further testing and was devastated to discover her suspicions had been correct when a biopsy in November last year revealed the lump to be stage four melanoma.

‘I have a child and I have so much to be here for. It’s not good enough and I have been angry, but it’s out of my control,’ she said in May.

‘I’m just trying to embrace the time I have left without being conscious that I’m on a deadline.’

In the months before her diagnosis, Ms Feerick said she felt the lump grow bigger and began to experience a ‘dull ache’ in that area of her head.

A few mornings, she said she woke to find blood splattered on her pillow, but otherwise felt fit and healthy. 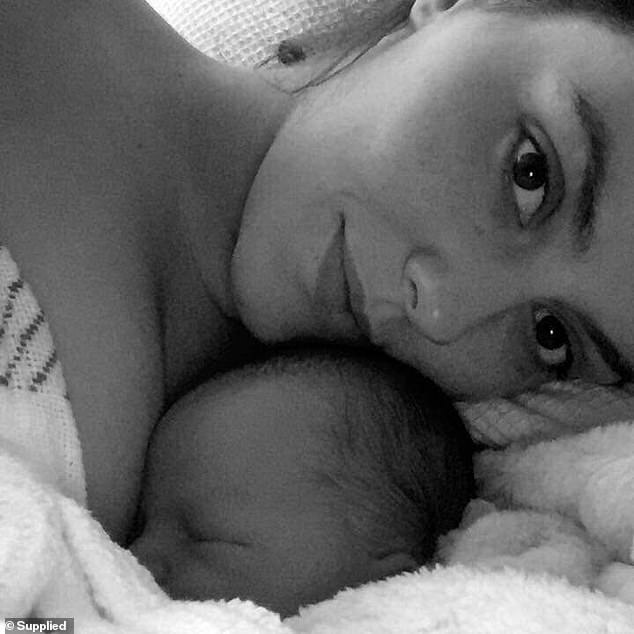 It wasn’t until she insisted on having the growth removed by a dermatologist that the reality of her condition was revealed.

A series of scans and a surgery in early December showed cancer had spread into the skull, lymph nodes and almost every bone of Ms Feerick’s body, causing lesions so severe that her hip fractured one night while she slept.

‘I was taken aback because I’d been repeatedly reassured it was nothing serious,’ she said of her diagnosis.

‘Two years of going to the doctors, and they kept telling me it was nothing.’

Melanoma and other forms of skin cancer are typically associated with excessive sun exposure and poor sun protection, but as Ms Feerick’s story proves, this is not always the case.

She said she rarely sunbaked and has been to the beach ‘about four or five times’ in the four and a half years she has lived in Australia.

Hers is a form of familial or genetic melanoma, an inherited condition passed down through one of two mutated genes which is notoriously difficult to treat.

‘This isn’t sun damage – it would have happened just as easily if I was in Ireland or anywhere else,’ she said.

What is familial melanoma?

Familial melanoma is a genetic or inherited condition. This means that the risk of melanoma can be passed from generation to generation.

To date, two genes have been linked to familial melanoma: CDKN2A and CDK4. A small number of families have a greater risk of melanoma because they have inherited a change in these specific genes.

The number of people who have an inherited risk of melanoma is unknown, but it is thought to be low.

In areas of higher sun exposure, like Australia and the southern United States, the frequency of sporadic melanoma is higher, so familial melanoma is not diagnosed unless three or more close relatives have invasive melanoma.

Signs that mean you should be checked by a cancer screening professional for familial melanoma include:

Doctors prescribed a course of immunotherapy that proved unsuccessful in slowing the growth of the tumours in Ms Feerick’s body, leaving no other option but a specialised drug known as a BRAF inhibitor that can prolong, but not save, her life.

‘They’ve told me remission is no longer a possibility. They said it’s time to think about going home and being with your family,’ she said.

‘There’s no timeline for how long these drugs will work. It could be only three months or it could be a couple of years, but the prognosis is about a year from now.’

Despite Australia’s ongoing international border closure, Ms Feerick’s father was granted entry on a compassionate visa to care for his daughter and grandson and help them make the long journey home.

Ms Feerick said she has been ‘completely overwhelmed’ by the support she has received from the Irish community, both at home and in Australia.

‘I cant thank everyone enough for their generosity and kind wishes,’ she said. 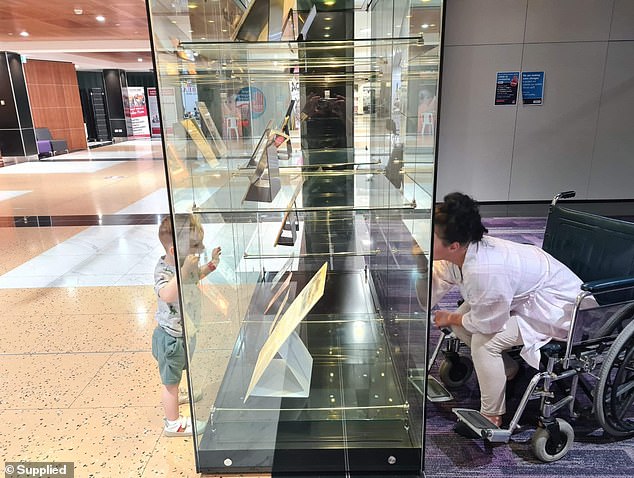 In recent months, Ms Feerick says she has felt her body grow weaker.

She urges others to be vigilant about their health by seeking second opinions about unexplained growths, no matter how insignificant they may seem.

‘Just because someone’s studied medicine, it doesn’t mean they know your body better than you do,’ she said.

‘When you have a gut feeling, don’t ignore it. Even if you feel like you’re annoying, keep pursuing it until you get an answer you feel content with.’

For more information about familial melanoma and other types of skin cancer, please visit the Australian Cancer Council here.