Melania Trump canceled her trip to Pennsylvania on Tuesday night to campaign with President Donald Trump hours before she was due to travel, citing a ‘lingering cough’ after her battle with COVID.

‘Mrs. Trump continues to feel better every day following her recovery from COVID-19, but with a lingering cough, and out of an abundance of caution, she will not be traveling today,’ her chief of staff Stephanie Grisham said in a statement.

Tuesday’s campaign rally in Erie, Pennsylvania, was to be her first public appearance since her bout with coronavirus.

President Trump was asked how she was doing when he did a telephone interview with ‘Fox & Friends’ on Tuesday morning.

Her last public appearance was at the first presidential debate, on September 29 in Cleveland.

Melania Trump canceled her scheduled appearance with President Donald Trump on the campaign trail Tuesday, her office said she has a lingering cough from her COVID battle. Her last public appearance was at the Cleveland debate on September 29 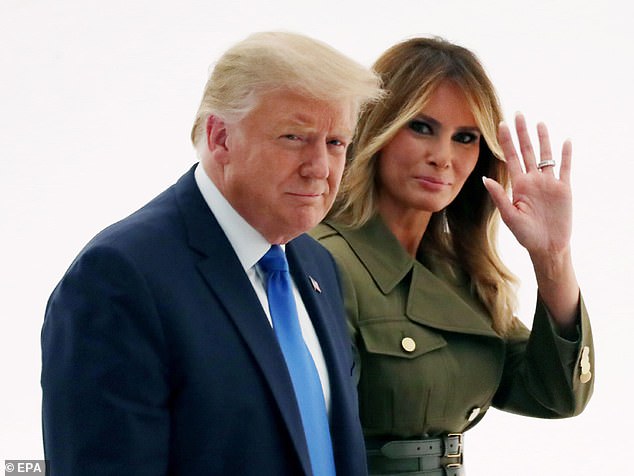 Melania’s last campaign appearance was on August 25, when she addressed the Republican National Convention from the White House Rose Garden – above her and the president leave after her remarks

Pennsylvania is a must-win state for the president. Democratic nominee Joe Biden leads Trump there by 4 points, according to the RealClearPolitics polling average of the state.

Both campaigns are fighting hard for its 20 electoral votes. Vice President Mike Pence was there Monday, Jill Biden will be there Tuesday and former President Barack Obama will campaign for Biden in Philadelphia on Wednesday.

Melania Trump made her final campaign appearance of 2016 in Pennsylvania at a solo event in Berwyn, just outside Philadelphia. Trump became the first Republican in more than 20 years to win Pennsylvania in 2016.

This cycle she has had a limited campaign schedule.

The first lady spoke on the second night of the Republican National Convention from the White House Rose Garden but that was her last public campaign event. And she was at President Trump’s re-election launch in Florida in June 2019.

She was also diagnosed with COVID-19 as the same time as the president, but recovered in the White House residence, using rest and vitamins.

Melania Trump announced last week she had recovered from the virus.

Unlike the president, Melania Trump didn’t check into the hospital after her diagnosis with COVID. She said she had minimal symptoms but admitted it hit her like a ‘roller coaster.’ 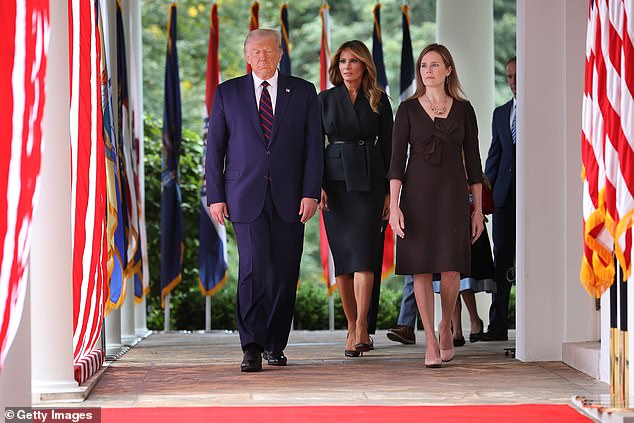 She also said she treated herself with a ‘natural route’ – opting for vitamins and healthy food – indicating she did not take a heavy course of medication as the president did for his illness.

‘I was very fortunate as my diagnosis came with minimal symptoms, though they hit me all at once and it seemed to be a roller coaster of symptoms in the days after. I experienced body aches, a cough and headaches, and felt extremely tired most of the time. I chose to go a more natural route in terms of medicine, opting more for vitamins and healthy food,’ Melania wrote in an essay published on the White House’s website.

Ahead of her return to public life, the first lady addressed some of the controversies that came out around the publication of her former best friend Stephanie Winston Wolkoff’s memoir.

Melania Trump slammed the ‘salacious claims’ in the tome and claimed Wolkoff wrote ‘book of idle gossip trying to distort my character.’

The first lady also attacked the media for reporting on ‘Melania & Me,’ a memoir of Wolkoff’s time working on Donald Trump’s January 2017 inauguration and in the East Wing.

‘Once again, outlets chose to focus their coverage on pettiness over my positive work. There are plenty of opportunists out there who only care about themselves, and unfortunately seek to self-aggrandize by knowingly taking advantage of my goodwill,’ Melania wrote in an essay published on the White House’s website on Friday.

Wolkoff’s book – the first to come from a former member of Melania’s inner circle – painted an unflattering portrait of the first lady. Wolkoff also recorded conversations with Melania that she played for the media during her book tour.

Melania claimed the conversations that Wolkoff played only had portions that were designed to make her look bad. In one excerpt, Melania is heard complaining ‘who gives a f*** about Christmas stuff’ while talking about planning the holiday decorations for the White House.

She blasted Wolkoff as someone who ‘secretly recorded our phone calls, releasing portions from me that were out of context, then wrote a book of idle gossip trying to distort my character.’

The essay marked the first time Melania Trump commented on the book and the tapes, which also revealed the first lady making disparaging remarks about immigrant children being separated from their parents.

In response, Wolkoff said she was puzzled why Melania Trump ‘hardly knew me.’

‘I find it puzzling that the First Lady of the United States asked someone she “hardly knew” to attend her nuptials, join her for countless lunches, help plan the presidential inauguration, stay over at the White House and Mar-a-Lago, and act as her senior adviser,’ she said in a statement.

‘I wrote this book to share with the public my experience of working with Melania, our fifteen-year-friendship, and her ultimate betrayal. This portrait is not all flattering but it’s the truth and Americans deserve the true about the occupants of the White House,’ she concluded. 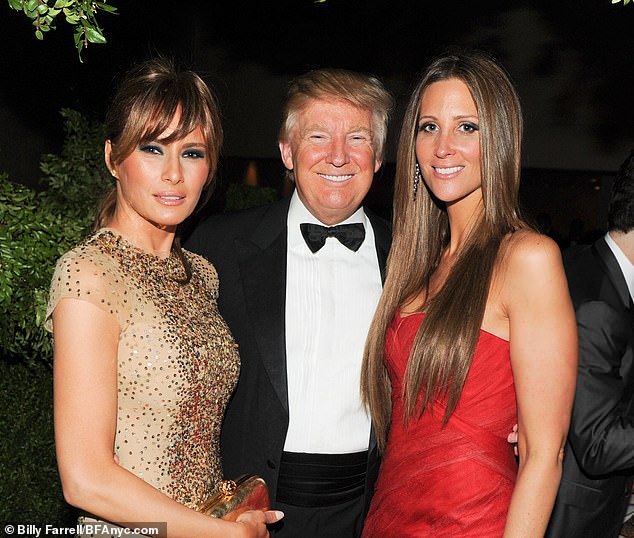 One-time friends: Melania Trump went after Stephanie Winston Wolkoff in a ferocious blog post Friday morning, slamming the ‘salacious claims’ in the memoir and claiming her former best friend wrote a ‘book of idle gossip trying to distort my character’

In the nearly 500 word post, Melania touted her Be Best work – which promotes well-being, online safety, and opioid abuse – and then went on to attack her former friend.

She did not mention Wolkoff by name but her meaning was clear.

‘Information that could be helpful to children is lost in the noise made by self-serving adults,’ Melania wrote. ‘I have most recently found this to be the case as major news outlets eagerly covered salacious claims made by a former contractor who advised my office. A person who said she “made me” even though she hardly knew me, and someone who clung to me after my husband won the Presidency.’

‘This is a woman who secretly recorded our phone calls, releasing portions from me that were out of context, then wrote a book of idle gossip trying to distort my character. Her “memoir” included blaming me for her ailing health from an accident she had long ago, and for bad news coverage that she brought upon herself and others. Never once looking within at her own dishonest behavior and all in an attempt to be relevant. These kinds of people only care about their personal agenda- not about helping others,’ she added.

‘To push forward a personal agenda that attempts to defame my office and the efforts of my team, only takes away from our work to help children,’ she concluded.

The first lady has not been seen in public since the White House announced almost two weeks ago she and President Donald Trump tested positive for the coronavirus.