A man who lived in a Paris airport for 18 years, inspiring Tom Hanks’ film The Terminal, has died from a reported heart attack.

But many don’t know much about his life – beyond the fact that he lived in Paris’s Charles de Gaulle airport from 1988 until 2006, before returning again in recent years.

However the Iranian was well-known among those who frequented the airport, becoming a mini-celebrity among passengers and staff, who nicknamed him Lord Alfred, due to his insistence he was British, and preferred moniker of Sir Alfred Mehran.

Mehran Karimi Nasseri (pictured) lived in Paris’s Charles de Gaulle airport from 1988 until 2006, recently returning after spending several years in a Paris shelter. He has died from a reported heart attack 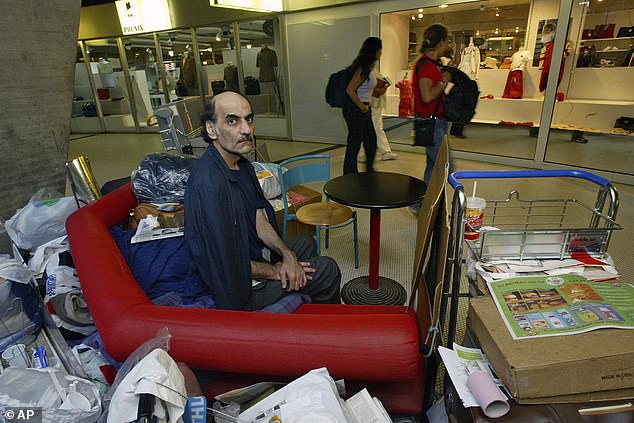 Mr Nasseri is pictured sitting among his belongings in the airport terminal. He spent more than 18 years living in a facility before 2006, before recently returning 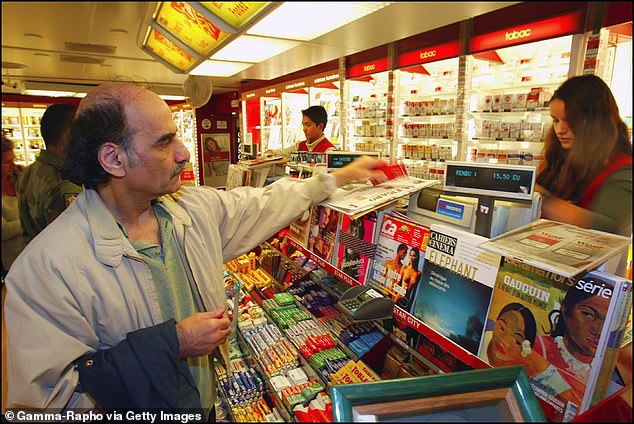 He preferred to be known as ‘Alfred’. Staff at the airport called Mr Nasseri Lord Alfred, and he became a mini celebrity among passengers 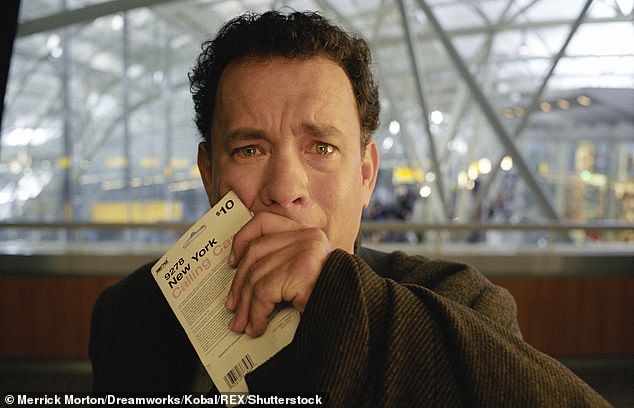 He initially first spent his years in the airport because he was in legal limbo, lacking residency papers when he first arrived in France, he later chose to live there by choice.

Mr Nasseri was born in Soleiman, a part of Iran then under British jurisdiction, to an Iranian father and a British mother. He left Iran to study in England in 1974.

When he returned, he claimed he was imprisoned for protesting against the shah and expelled without a passport.

However, later investigations suggested he was never, in fact, banished from Iran. 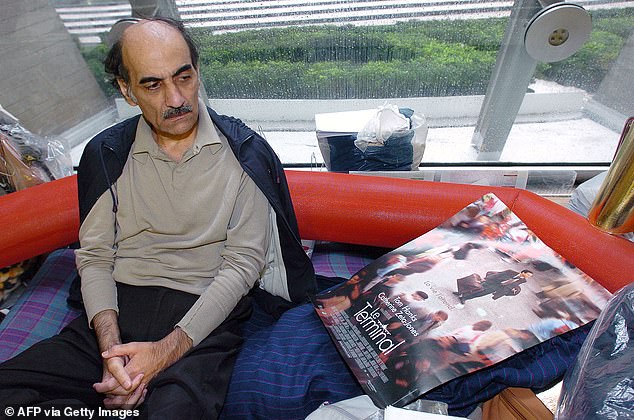 Mehran Karimi Nasseri lived in Paris’s Charles de Gaulle airport from 1988 until 2006. He first lived there because of legal reasons, but later returned through choice 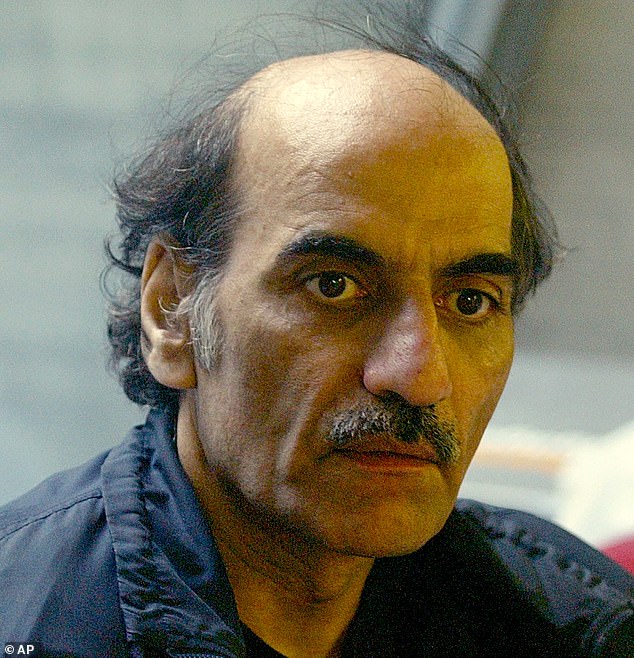 When he finally received refugee papers, he described his surprise, and his insecurity, about leaving the airport, leading an airport worker to compare him to a prisoner incapable of ‘living on the outside’ 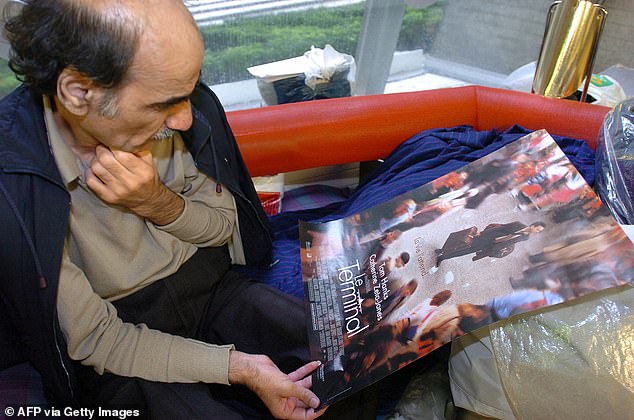 While he first spent his years in the airport first in because he was in legal limbo, he later returned through choice 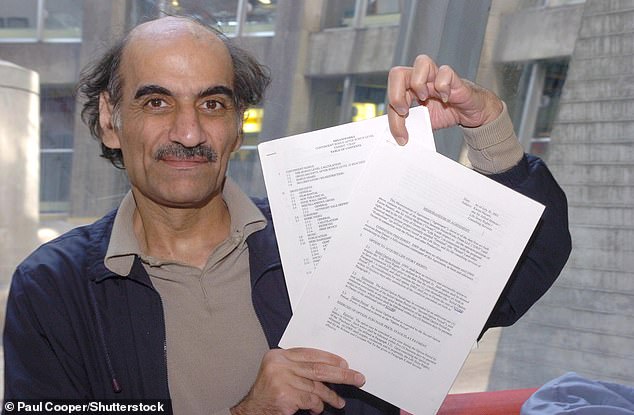 Without a passport, Mr Nasseri (pictured here in 2004) was left in a legal Twilight Zone, forcing him to live in the airport for years

Mr Nasseri, who is thought to have been born in 1945, applied for political asylum in several countries in Europe. The UNHCR in Belgium gave him refugee credentials, but he said his briefcase containing the refugee certificate was stolen in a Paris train station.

French police later arrested him, but couldn’t deport him anywhere because he had no official documents. He ended up at Charles de Gaulle in August 1988 and stayed.

During his initial 18-year stint living in Terminal One, he slept on a red plastic bench, making friends with airport workers, showering in staff facilities, writing in his diary, reading magazines and watching passing travellers.

‘Eventually, I will leave the airport,’ he told The Associated Press in 1999, smoking a pipe on his bench, looking frail with long thin hair, sunken eyes and hollow cheeks. 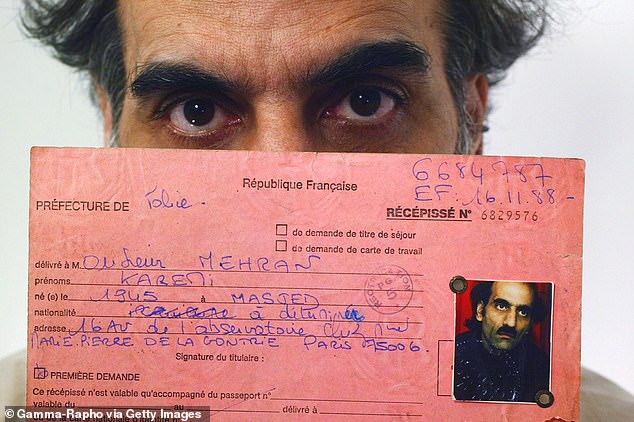 The Iran-born man survived in the airport for 18 years the first time he lived there, inspiring two films and an opera loosely based on his  story 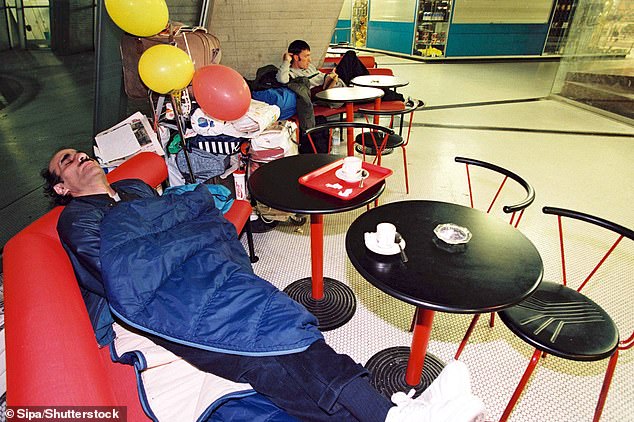 French police arrested Mr Nasseri at one point, but could not deport him anywhere because he had no official documents. He ended up at Charles de Gaulle in August 1988 and stayed 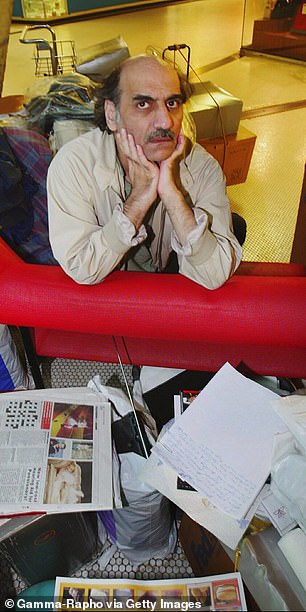 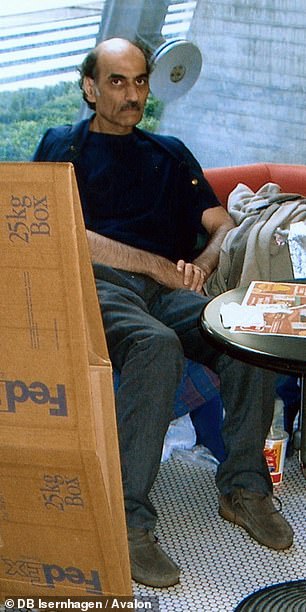 Mr Nasseri is pictured at the airport, surrounded by his belongings, including magazines and paper he appears to have used for journalling 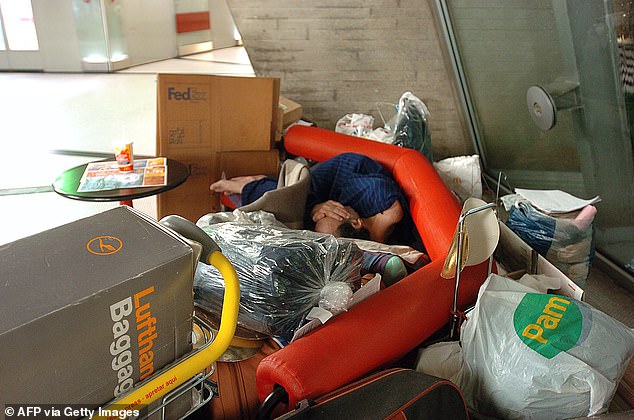 ‘But I am still waiting for a passport or transit visa.’

Those who befriended him in the airport said the years of living in the windowless space took a toll on his mental state.

The airport doctor in the 1990s worried about his physical and mental health, and described him as ‘fossilised here’.

Both France and Belgium offered Mr Nasseri residency throughout the years but he reportedly was upset they listed him as Iranian, rather than British, and wanted them to address him by his preferred name of Sir Alfred Mehran. 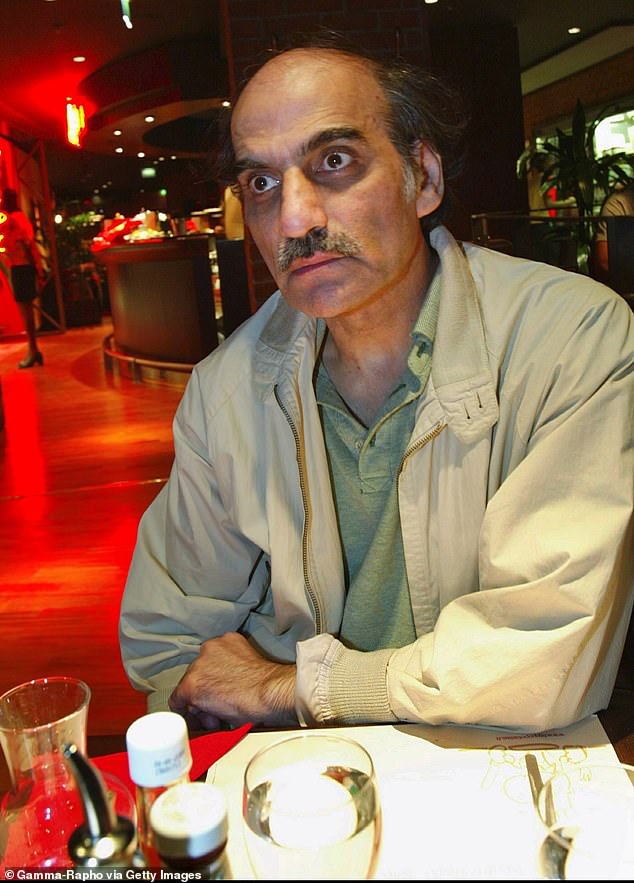 Mr Nasseri was offered residency by both France and Belgium, but he was reportedly upset they listed him as Iranian, rather than British 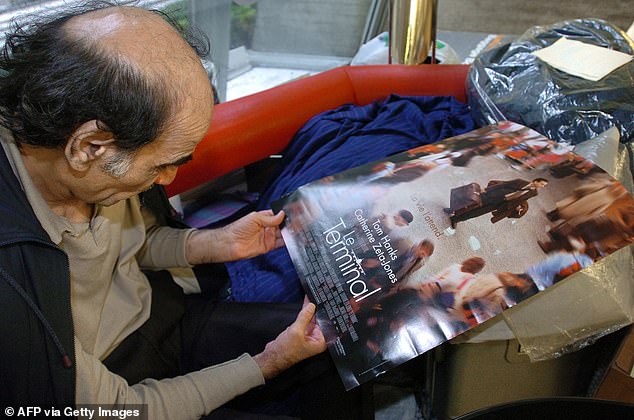 The airport-bound man is seen looking at a poster for the Tom Hanks film The Terminal, which was loosely based on his life 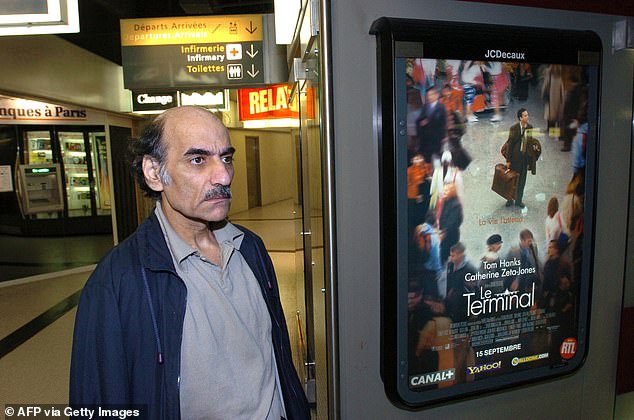 When he finally received refugee papers, he described his surprise, and his insecurity, about leaving the airport.

He reportedly refused to sign them, and ended up staying there several more years until he was admitted to hospital in 2006, and later lived in a Paris shelter.

After spending several years in the shelter, he recently returned to the airport, and took up residence in Terminal 2F. 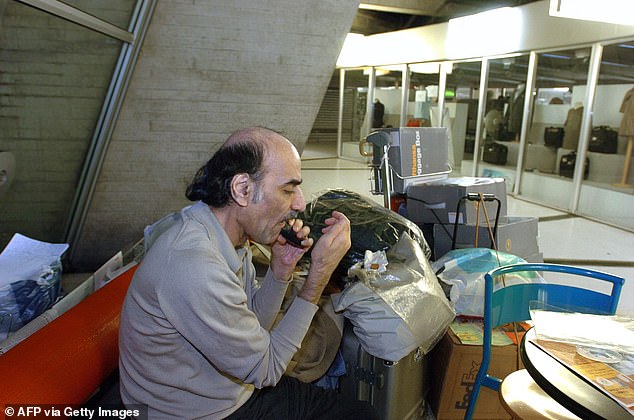 Mr Nasseri, who is believed to have been born in 1945, died yesterday at the airport from a reported heart attack. He is thought to have been 77-years-old 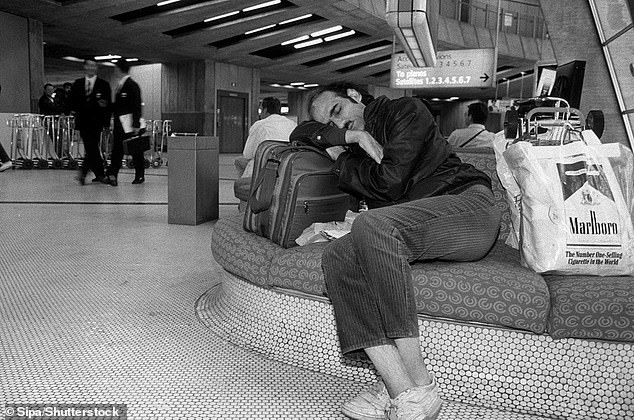 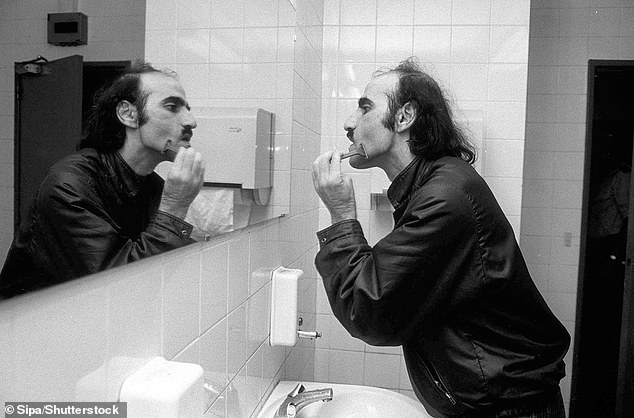 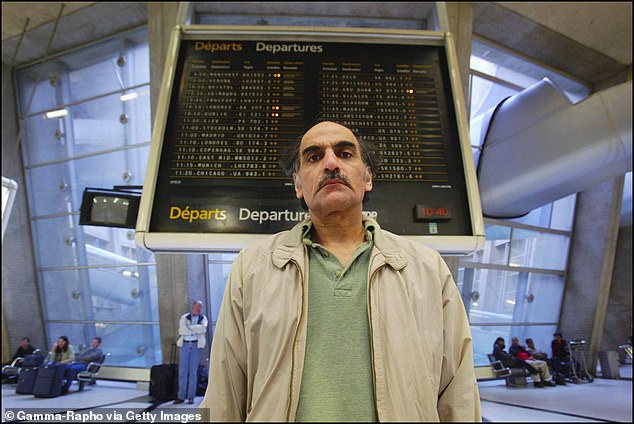 Mr Nasseri died on Saturday after a heart attack in the airport’s Terminal 2F around midday, according an official with the Paris airport authority

Due to his insistence on living in the facility, a ticket agent compared him to a prisoner incapable of ‘living on the outside’.

He died after a heart attack in the airport’s Terminal 2F around midday, according an official with the Paris airport authority.

Police and a medical team treated him but were not able to save him, the official said. The official was not authorised to be publicly named.