Meghan Markle’s BFF Misha Nonoo has confessed she is ‘exhausted’ after a ‘difficult year’ in an Instagram post.

The British-Bahraini fashion designer, who lives in New York and is known for her eponymous clothing line, revealed online she would be ‘taking a little break’ over the festive period in order to ‘take time to rest and rejuvenate’.

Sharing a snap on Instagram as she posed in a red shirt, she wrote: ‘Each one of us has deeply appreciated your support this year. It has been a difficult one and we admit, we are exhausted.

Misha, who is rumoured to have introduced Meghan, 39, and Prince Harry, 36, and her oil heir husband Mikey Hess, 33, announced the birth of their first child Leo in March.

Meghan Markle ‘s fashion designer BFF Misha Nonoo, who lives in New York, has confessed she is ‘exhausted’ after a ‘difficult year’ in an Instagram post 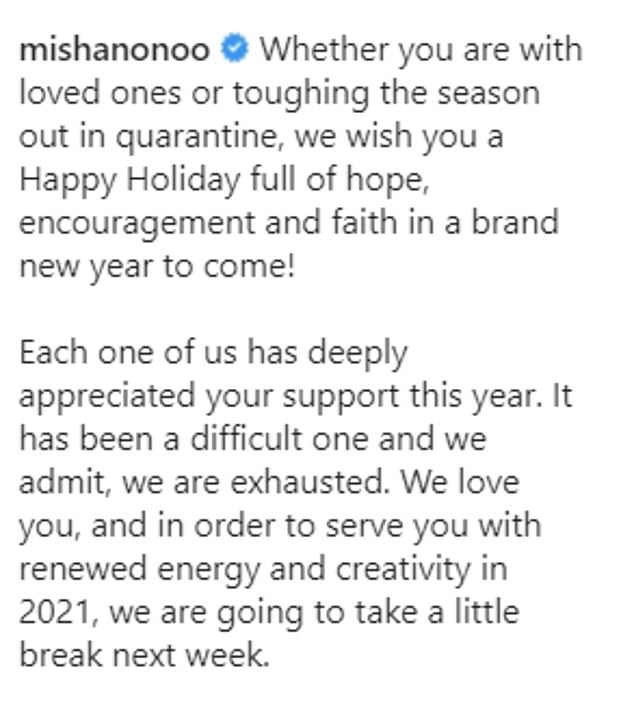 The British-Bahraini fashion designer, who lives in New York and is known for her eponymous clothing line, revealed online she would be ‘taking a little break’ over the festive period

Captioning the photograph, which was shared yesterday, Misha wrote: ‘Whether you are with loved ones or toughing the season out in quarantine, we wish you a Happy Holiday full of hope, encouragement and faith in a brand new year to come!

‘We love you, and in order to serve you with renewed energy and creativity in 2021, we are going to take a little break next week.’

She continued: ‘We learned so much this year, and one of those things was the importance of caring for each other and taking time to rest and rejuvenate. 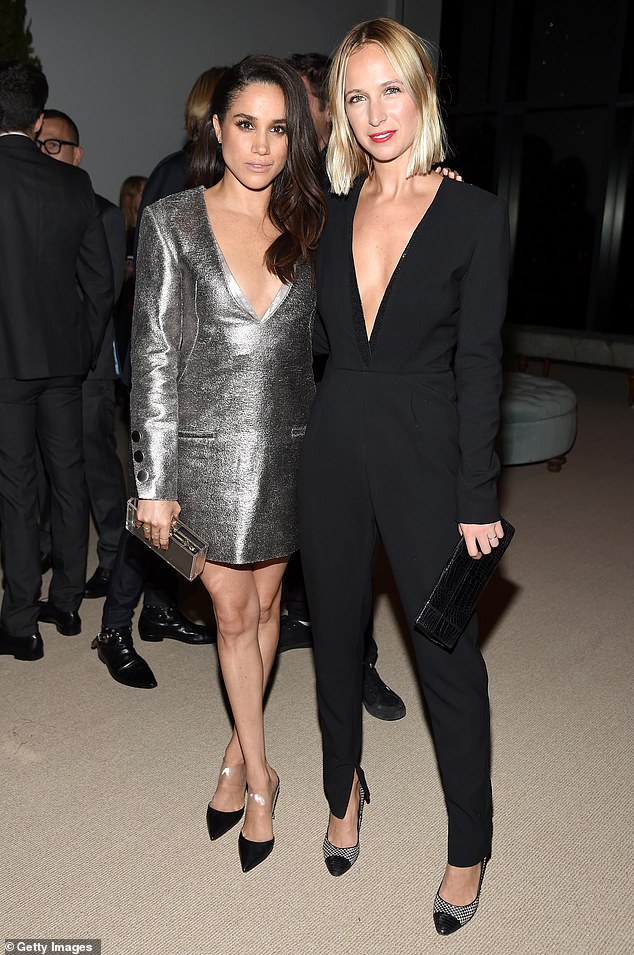 Earlier this year, the bombshell biography Finding Freedom, co-authored by journalists Omid Scobie and Carolyn Durand, which documents the friendship of Meghan Markle and Misha.

It alleges how Markus Anderson, Soho Houses global membership director, provided the royal with introductions to many business and cultural elites – both in Canada and further afield.

The authors penned: ‘At a Soho House lunch in Miami, he was the one who sat the actress next to Misha, a budding fashion designer with a vivacious personality and impeccable pedigree.

‘The occasion for the December 2014 Miami trip was Art Basel, a decadent art fair that brings the internationally rich and famous for a week of parties and events of all sorts and sizes.

‘Markus invited Meghan, an art lover, to stay at the epicenter of the action, Soho Beach House, to set some sun, see some art, and have some fun.

‘A perfect place to make new friends and connections, the Soho house event saw Misha and Meghan hit it off immediately.’

The explosive biography goes on to suggest Misha and Markus were behind Meghan and Prince Harry’s first meeting.

It’s thought the Duchess’ close pals set the pair, who are now living in the US, up on a blind date in London.

Earlier this year, the fashion designer confessed to ‘massively missing her friends’ while quarantined in New York with Leo – and revealed that she ‘needs her girlfriends to have a laugh with and make light of things’ when speaking to People magazine.

Misha and her oil heir husband Mikey Hess, 33, announced the birth of their first child Leo in March.

The first time mother has since been making an effort to connect with friends virtually, saying: ‘It’s very stressful not having your normal life to return to — I knew having a baby would change my life, but I never expected this.’ 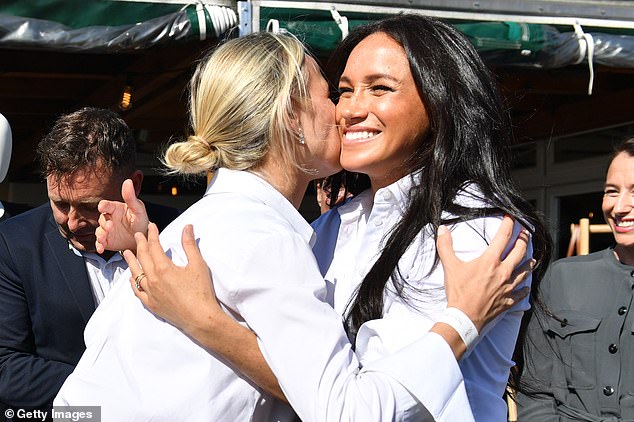 Misha worked with the duchess (pictured together in 2019) on her Smart Works charity clothing line, calling Meghan ‘wonderful, thoughtful and considerate’

‘I’ve massively missed seeing my friends. As soon as Leo was born we would have been in the store and seeing friends and been to London by now and, obviously, all of those plans are on hold,’ the designer added.

In the meantime, the fashion designer has been taking advantage of FaceTime, but admits ‘it’s not the same’.

‘Being a new mum, you need a support network, and I definitely miss having in-person time with my new baby and my friends,’ she explained.

‘I miss having my girlfriends to have a laugh with and make light of things. This is a challenging and stressful and discombobulating time, but we have to look forward to the time when we can all be together.’

However, Misha said she has ‘really enjoyed’ the family time she’s been able to have, since her husband would’ve been travelling for work under normal circumstances.

During her pregnancy, Misha told People, that the Duchess of Sussex had been sharing her advice about becoming a first-time mother.

The designer revealed: ‘As with all friendships, you share lots of tips and everything.’

Her baby announcement came less than a year after close friend Meghan gave birth to baby Archie in May 2019. 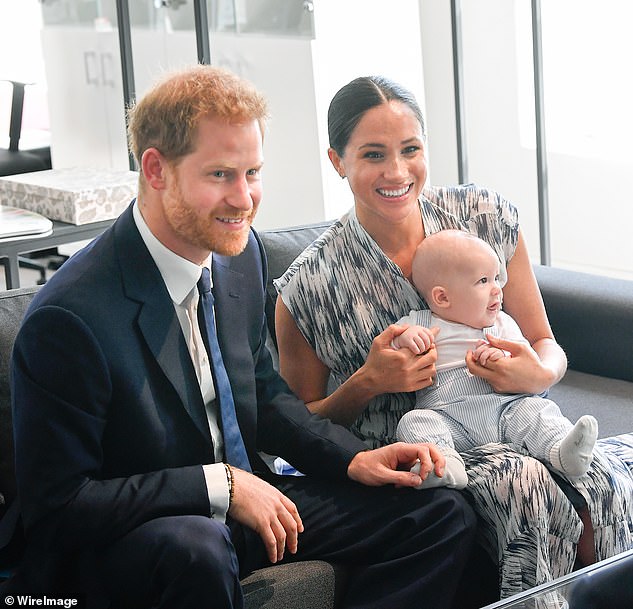 Future friends? Misha gave birth to baby Leo less than a year after Meghan and Prince Harry welcomed baby Archie in May

Misha married her husband Mikey in a ceremony in Rome in September that was attended by Prince Harry, Meghan, Princess Eugenie, 29, and Princess Beatrice, 31 before announcing her pregnancy at the end of the year.

The Duchess has continued to support her friend by wearing Misha Nonoo styles over the years and donned the famous ‘Boyfriend shirt’ for her first appearance alongside Prince Harry, and also wore another of Misha’s designs for her final day of meetings in the UK before stepping back from royal duties.

Misha, who worked with the Duchess on her Smart Works charity clothing line, opened up to FEMAIL earlier this year about her friendship with the royal.

Reflecting on the experience of working together, Misha described Meghan as ‘the ultimate professional’ and very ‘considerate’ of the women the collection was helping.

‘It was such an ideal, incredibly easy collaboration,’ she said. ‘It was, from start to finish, wonderful, thoughtful, considerate, as is she.’