Meghan Markle will conduct ‘private and patronage-related meetings’ when she returns to the UK next month, source claims

Meghan Markle ‘will be conducting private and patronage-related meetings’ when she returns to the UK next month, a source has told BAZAAR.com.

The Duchess of Sussex, 38, will join her husband Prince Harry, 35, in Britain, next month for three public events before the pair officially step down from royal duties.

A loose itinerary was revealed for the trip last week, but it has been suggested that former actress Meghan could fill her remaining time with ‘secret’ engagements.

She has regularly made private visits to her patronages in the past and often shares photographs from the trips to her Instagram page at a later date.

Meghan Markle (pictured) ‘will be conducting private and patronage-related meetings’ when returning to the UK next month, a royal source has claimed

The source said: ‘Meghan will be conducting something private and patronage-related meetings during her time in London.’

It comes as the Telegraph reported that the duchess is ‘expected to run her own series of private engagements’.

Some fans hoped she’d make an appearance at the first British Vogue Forces For Change event with Salma Hayek on March 7, inspired by the issue of the the magazine she guest edited last year.

However, sources told the Telegraph that she won’t attend, noting that she’s scheduled to attend the Mountbatten Festival alongside her husband that day. 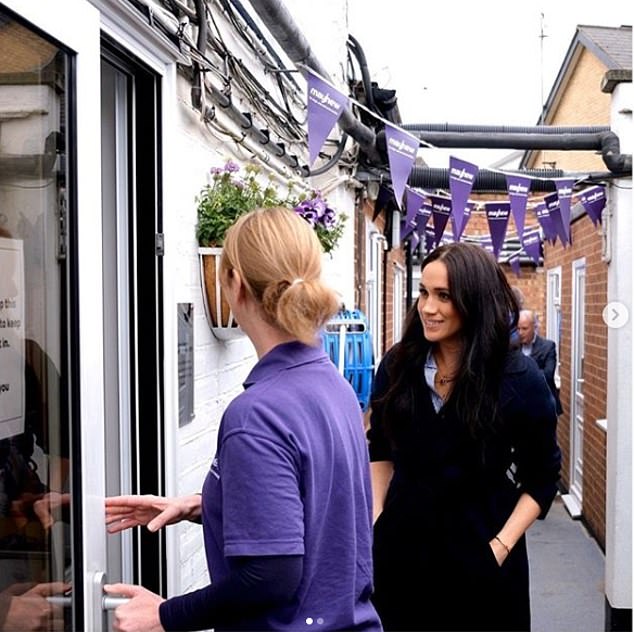 Meghan during a private visit to The Mayhew centre, an animal welfare charity in London, last month. She later shared a photograph of her trip to her Instagram account

The duchess will join the Duke of Sussex at Endeavour Fund Awards on March 5 and the Mountbatten Music Festival at the Royal Albert Hall two days later.

Their final official engagement is expected to be as soon as March 9, when they will join the Queen at Westminster Abbey to mark Commonwealth Day.

Before they officially step down on March 31, Harry will also attend a recording session with US rock star Jon Bon Jovi and the Invictus Games choir, who are rerecording his song Unbroken to promote this year’s tournament.

What will happen next as Prince Harry and Meghan step down?

March 5: Harry and Meghan will then attend the Endeavour Fund awards

March 6: Harry will be at Silverstone with racing driver Lewis Hamilton

March 7: Harry and Meghan will attend the Mountbatten Festival of Music.

This is the same day as Edward Enninful’s Forces For Change event.

March 9: The couple will join the Queen and the Royal Family for the Commonwealth Service at Westminster Abbey

April 1: The Sussexes will no longer have an office at Buckingham Palace

On March 6, Harry will join British Formula 1 driver Lewis Hamilton at the official opening of the Silverstone Experience.

The much-anticipated museum – which the duke has been backing for years – will tell the story of the past, present and future of British motor racing.

Meanwhile, Meghan is expected to undertake an engagement to mark International Women’s Day on March 8, although no specifics have yet been revealed.