Meghan Markle has insisted confidence is the ‘best accessory’ for women during a video call with clients from her patronage Smart Works which was released today to mark the anniversary of her sell-out charity collection.

The Duchess of Sussex, 39, who recently signed a $150 million deal with Netflix, joined the virtual call with three clients from her patronage Smart Works from her $14 million mansion in Santa Barbara.

The charity helps vulnerable and long-term unemployed women by dressing them for interviews and offering interview prep sessions with experienced professionals.

In a video released on the charity’s Instagram page, Meghan said: ‘People can say that so much of Smart Works is about the clothes themselves but it’s really not … all of that stuff is the exterior but it’s what it does for you on the inside that ends up being the best accessory. It’s the confidence, it’s what is built within, that is the piece that you walk out of that room with and walk into the interview with.’

The Duchess is known for her love of designer clothing and is believed to have worn over £944,000 worth of clothes during her time as a working member of the royal family.

The Duchess of Sussex, 39, who recently signed a $150 million deal with Netflix, joined the virtual call with three clients from her patronage Smart Works from her $14 million mansion in Santa Barbara

The Duchess donned a camel coloured satin tank top and a chic white blazer for the virtual meeting.

She swept her hair into a neat side ponytail and opted for a touch of bronzer and lip gloss for the call.

During the call, she added: ‘As women so often it’s so easy to forget all of your skills and assets.

‘Not that they’re not there, but you need someone to point them out for you and say, “yeah that’s right.”‘ 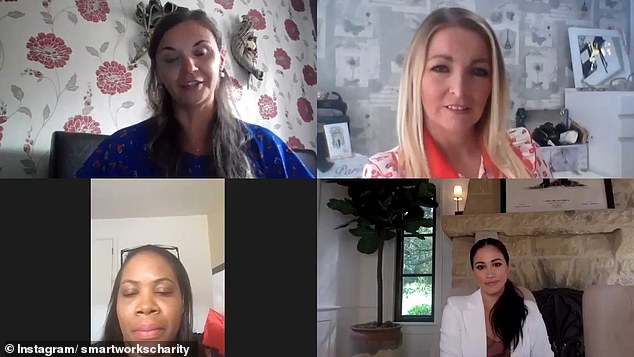 ‘I find women who volunteer, especially with Smart Works, is they’re not pointing out something that doesn’t exist, but they’re seeing something in you for the first time.

Meghan went on to ask for her best tip that the three clients learned while on the charity, with one woman saying: ‘Believe in yourself.’

Sharing the clip online, the charity, which remains one of Meghan’s patronages despite her stepping back from royal duty, posted: ‘One year ago, Smart Works announced the launch of The Smart Set Capsule Collection with The Duchess of Sussex.

‘The collection was designed to create a perfect working wardrobe for Smart Works clients. 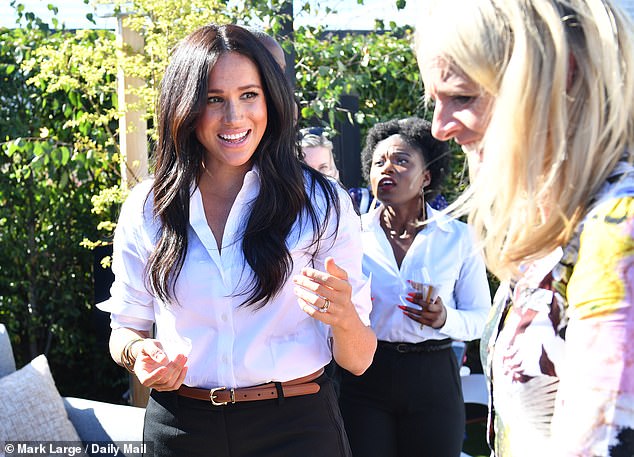 ‘With over 3,000 clients coming to Smart Works in the last year and 1,000 women taking pieces, the collection has proved to be invaluable.

‘In particular it has played an important role in ensuring the success of the new virtual service which was launched as a response to the COVID-19 pandemic.

‘To celebrate the first anniversary, The Duchess of Sussex sat down to speak to Karla, Charlene and Agnieszka, three previous clients, to see how their time at Smart Works has helped transform their lives.’

The Duchess launched the Smart Set collection last September, which saw every item sold by the retailers matched with one item donated to SmartWorks.

Meghan privately visited Smart Works several times before being named as its royal patron in January last year and has a long-standing commitment to supporting women’s empowerment.

The video clip comes days after it a royal source claimed Meghan and Prince Harry failed to tell the Queen, 94, about their Netflix deal, which could be worth as much as $150million, before announcing it to the world. 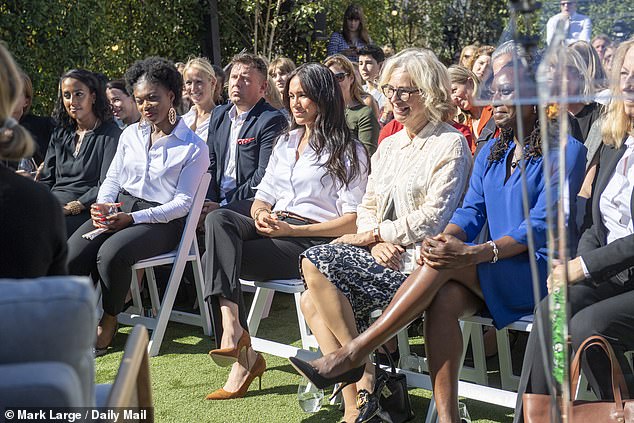 Her Majesty had to be told by her aides about the couple’s new venture – which involves a yet-to-be-named production company set on making documentaries, feature films and children’s programming.

A source told The Sun: ‘Harry did not inform the Queen about the Netflix deal.’

The Duke and Duchess of Sussex, who have never produced a TV show, will make documentaries, films, scripted and kids’ programmes in the new partnership.

‘Her Majesty is all too aware of the pitfalls of when senior royals embark on lucrative projects – Prince Edwards’ production flop and some of the deals Sarah Ferguson has signed over the years to name a few,’ the source told Fabulous.

‘Her view is simple, the Royals are not for sale and danger surrounds high profile roles outside of the institution itself.’ 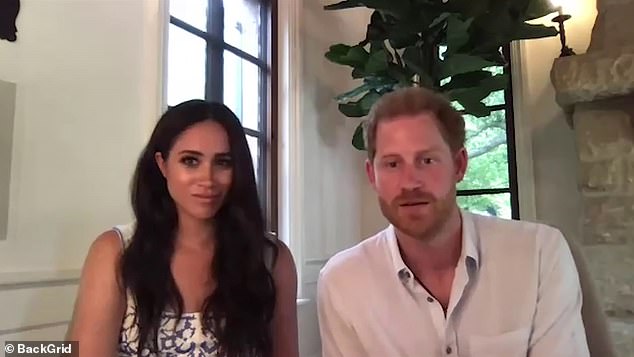 They added, however, that the Queen, ‘knowing her grandson Harry as she does’, will appreciate that the duke and duchess can not be talked out of their plans.

They vowed to make ‘impactful content that unlocks action’ and name-checked Netflix chief executive Ted Sarandos and spoke of the firm’s ‘unprecedented reach’.

They are expected to make content which includes work on ‘mental health’, an animated series about women, a nature documentary and shows on community service.

However, royal officials ‘will examine Harry and Meghan’s Netflix deal’ after they agreed to approval of any new commercial ventures when they quit public life, according to a source.

A palace insider claimed that despite ditching official duties any profit-oriented plans would be ‘subject to discussion’.

Harry and Meghan got the green light to broker commercial deals in January – but the moneymaking projects will be scrutinised by the Queen after a year.

The historic agreement ruled the couple will drop their HRH titles, pay back £2.4million of taxpayer cash and no longer receive public funds.

In exchange, they were allowed to quit frontline duties and given licence to expand their brand.