The Duchess of Sussex was caught in an awkward moment as she joined Prince Harry on stage at a polo event on Sunday.

Meghan Markle, 40, was on hand to present Prince Harry, 37, and his team, Los Padres, with a trophy after they won an event at the Santa Barbara Polo & Racquet Club.

But the prize-giving had clearly not been rehearsed and Meghan ended up being squashed between Harry and one of his teenage teammates as they struggled to lift the heavy cup over her head for a photo.

After a few seconds in the shadows at the back of the stage, Meghan stepped to the front of the stage for her moment in the spotlight.

Footage of the encounter was shared online by a Twitter user who noted it looked like they ‘didn’t know where to put her’ and then ended up ‘blocking her with the trophy’.

Stuck in the middle: Meghan Markle, 40, was on hand to present Prince Harry, 37, and his team with a trophy after they won an event at the Santa Barbara Polo & Racquet Club on Sunday. But the moment had not been rehearsed and Meghan ended up being squashed between Harry and one of his teenage teammates as they struggled to lift the heavy cup over her head 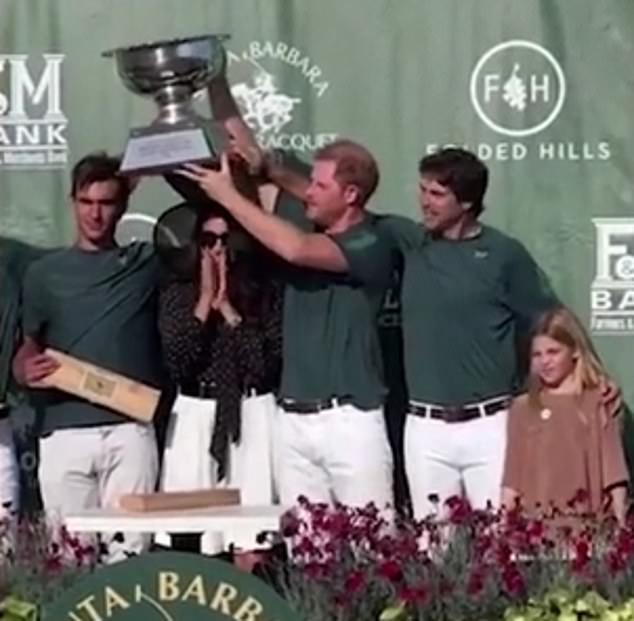 Ready for the camera! After a few seconds in the shadows at the back of the stage, Meghan stepped to the front of the stage for her moment in the spotlight (pictured)

Front and centre: Meghan joined Prince Harry and his teammates on stage after their win 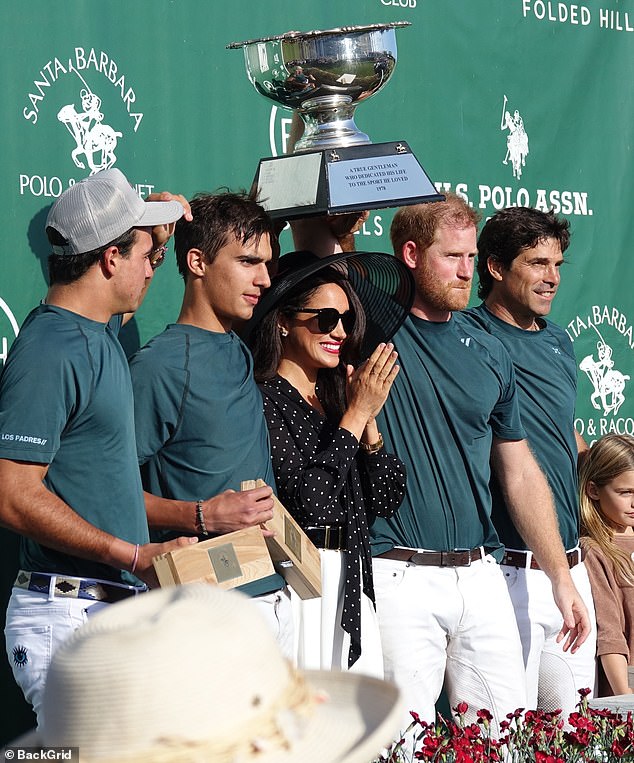 Smile! After a few seconds in the shadows at the back of the stage, Meghan stepped to the front of the stage for her moment in the spotlight (pictured) 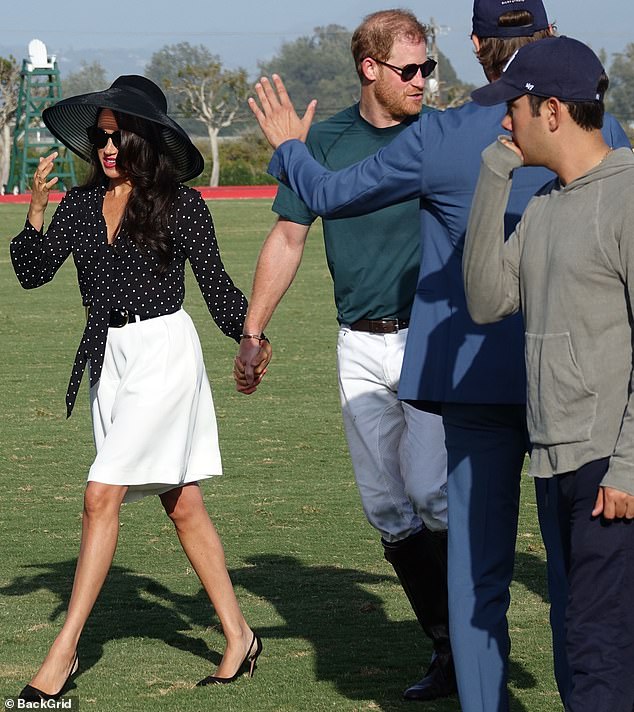 Retro glamour! Meghan Markle, 40, was on hand to present Prince Harry, 37, and his team, Los Padres, with a trophy after they won an event at the Santa Barbara Polo & Racquet Club

Harry’s team, which is captained by his friend Nacho Figueras, dubbed the ‘David Beckham of polo’, took home the Lisle Nixon Memorial trophy at the star-studded event, which was open to the public and attracted stars including Rebel Wilson and Meghan’s actress BFF Abigail Spencer.

Meghan, who wore a black wide brim hat, polka dot blouse and £670 high-rise pleated shorts, was on hand to present the prize and pecked each team member on the cheek – before planting a kiss on her husband’s mouth.

Realising some of her lipstick had rubbed off, she took her finger and gave Harry’s lips a wipe in an intimate moment watched by the crowd of spectators.

As seen in the clip, Meghan then maneuvered herself to the middle of the stage, ready for the trophy photo.

Harry appeared to be telling his younger teammates, who are both 16, how the moment should unfold when captain Nacho Figueras, a longtime friend of the Sussexes, reached in and lifted the trophy above his head and passed it to Harry.

Old friends: The Duchess of Sussex congratulated captain Nacho Figueras on the victory at the Santa Barbara club yesterday 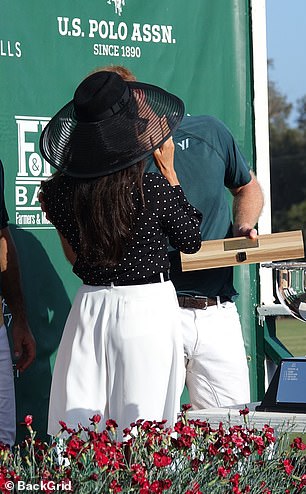 And a kiss for Harry! The Duke of Sussex waited patiently at the end of the line before his wife planted a kiss on his lips 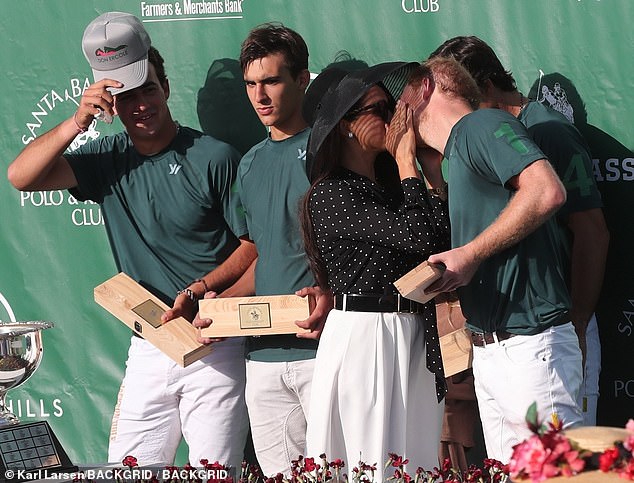 A kiss for the crowd! The Duke and Duchess shared a kiss on stage after Los Padres won the memorial cup yesterday 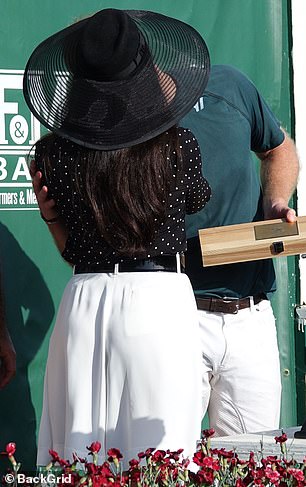 Intimate moment: The Duke and Duchess of Sussex put on a show for the crowd as they kissed on stage following his win 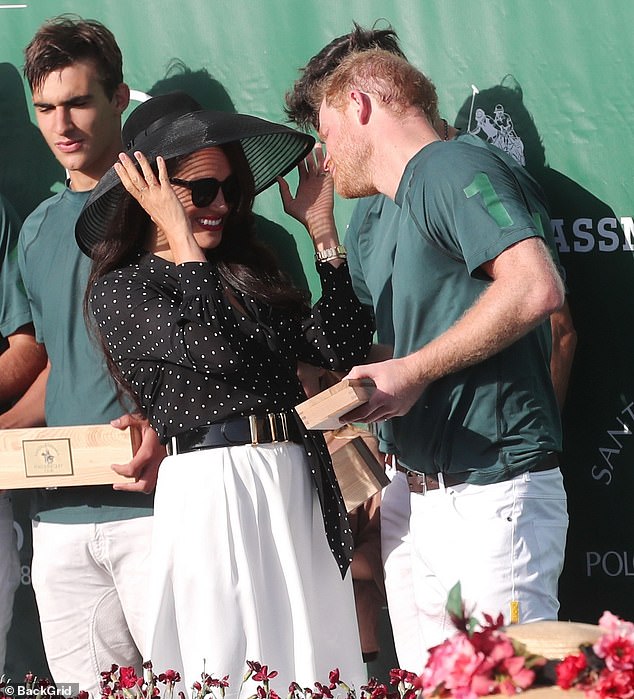 Giggling Duchess! Meghan smiled coyly as Harry leaned in to whisper something in her ear in the public display of affection

Touchy-feely: The Duchess of Sussex held her husband’s arm after presenting him and his team with the memorial trophy 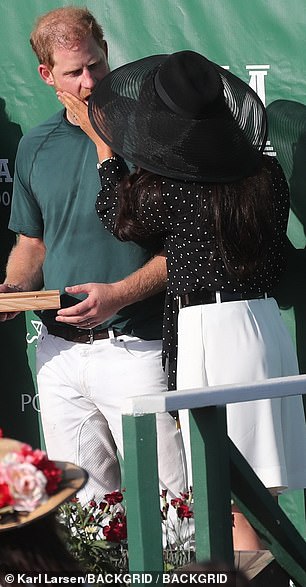 Let me get that for you: Meghan had left behind a trace of her lipstick so reached in to wipe it from Harry’s mouth 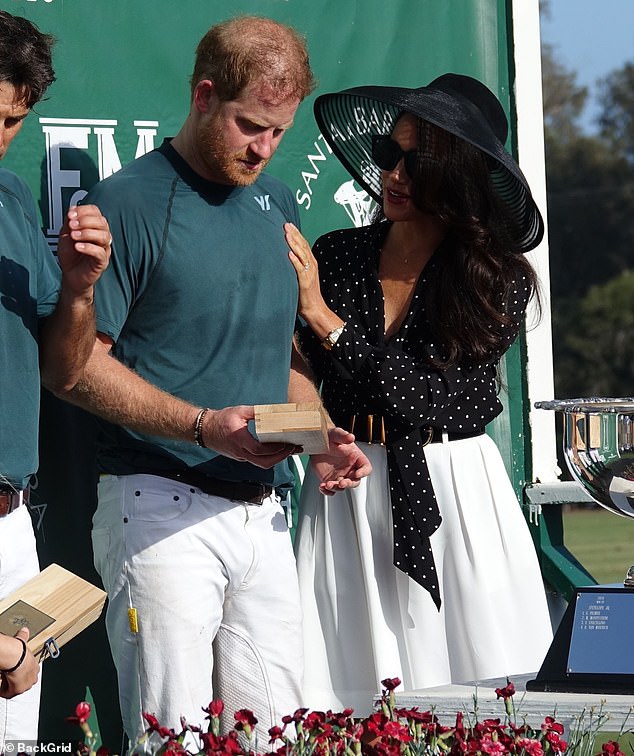 All okay? Meghan placed a reassuring hand on her husband’s chest during a quiet moment on stage in front of onlookers

The prince then told his young teammates to ‘hold it’.

But the commotion meant Meghan was pushed to the back of the stage. The mother-of-two clapped in the shadows before stepping forward again into the spotlight, pushing underneath Prince Harry’s arms.

It comes as the Duke and Duchess of Sussex prepare to jet off to London for the Queen’s Platinum Jubilee weekend next week.

They will be joined by their children Archie, three, who was born in the UK, and Lilibet, 11 months, who has never met the British side of her family. 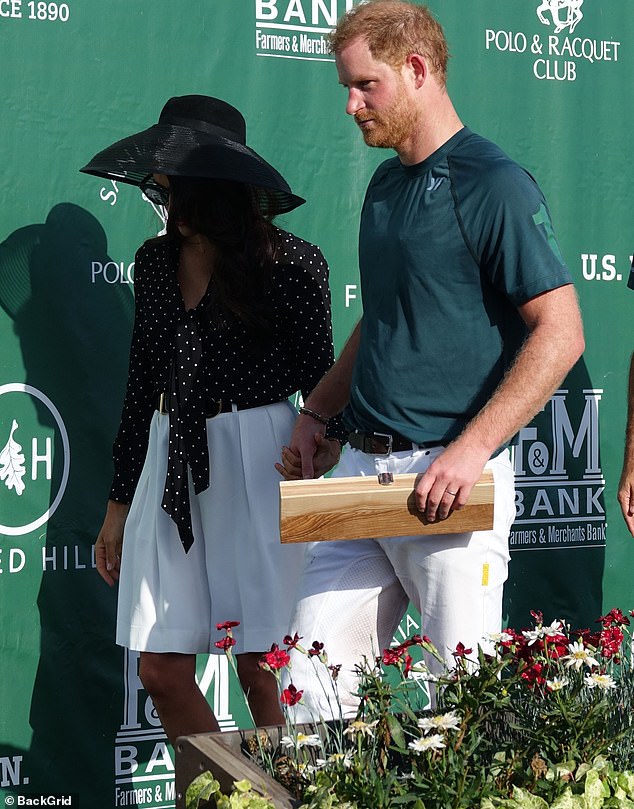 Harry and Meghan, who will soon jet off to the UK for the Queen’s Platinum Jubilee celebrations, held hands as they walked off

After leaving the stage, the Duchess of Sussex whipped off her designer sunglasses to mingle with some of the guests

Harry and Meghan have taken their children to other polo events this season but left them at home yesterday.

Meghan opted for a glamorous, retro look for yesterday’s outing, wearing her brunette locks in big, bouncy curls underneath her wide brim hat.

Dressing for the California sun, she opted for a breezy black and white polka dot blouse with a pussy bow which she wore loosely tied at her chest.

The duchess paired the printed piece with £670 wide-leg shorts from go-to brand Khaite, which she finished with a £410 black patent belt by the designer.

Despite needing to walk across grass, Meghan decided to wear her favourite £500 Aquazzura pumps.

She finished the monochrome ensemble with a slick of red lipstick, a pair of diamond earrings, delicate rings and a gold necklace.

Harry and Meghan had sent out invitations to a number of high profile names inviting them to yesterday’s event in aid of local charities.

The Duke of Sussex’s polo team is also releasing their own range of clothing in collaboration with trendy LA brand James Perse to benefit organisations including Heal The Ocean.