Meghan Markle has thrown her support behind Grenfell Tower survivors who have launched a campaign to feed Londoners during the coronavirus lockdown.

Meghan, 38, took part in a video conference last week with members of the Hubb Community Kitchen, which was set up in the wake of the 2017 Grenfell Tower disaster to feed survivors and their families.

From Monday, members of the Hubb Community Kitchen will cook between 250 and 300 meals a day, three days a week, in their own homes to be distributed to elderly and vulnerable people living in London.

Meghan praised the spirit of community and said she is ‘moved’ by the people donating money to make it happen, according to the Evening Standard.

Meghan Markle has thrown her support behind Grenfell Tower survivors who have launched a campaign to feed Londoners during the coronavirus lockdown. Pictured, the Duchess in a video call with members of the Hubb Community Kitchen last week

She said: ‘The spirit of the Hubb Community Kitchen has always been one of caring, giving back and helping those in need, initially in Grenfell and now throughout the UK.

‘A home-cooked meal from one neighbour to another, when they need it most, is what community is all about.

‘I’m so proud of the women of the Hubb Community Kitchen, and the continued support The Felix Project gives them to carry out these acts of goodwill, which at this moment are urgently needed.’

The Duchess of Sussex, who is living in California with Prince Harry and 11-month-old son Archie, has developed a close relationship with the Hubb Community Kitchen since the release of 2018 charity cookbook Together, which marked her first solo venture as a royal. 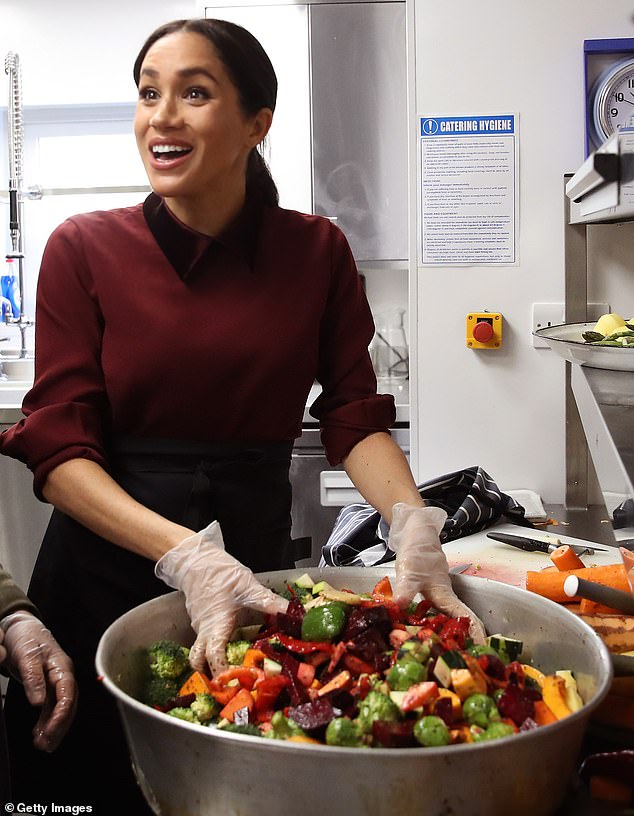 The Duchess of Sussex has developed a close relationship with the Hubb Community Kitchen since the release of 2018 charity cookbook Together, which marked her first solo venture as a royal. Pictured, a photo of Meghan on a visit to the kitchen in November 2018

Last week she took part in a call with several members of the group to discuss how their work can be adapted during the lockdown.

Meghan said during the call: ‘You all had it in you and what was so great is after that first day and then however many visits later, and going “yeah we’re just going to make a book”, and not realising, knowing and having a lot of faith in what you guys could bring to the table, and what you could inspire but obviously not knowing what a huge success it was going to be.

‘That is just a testament to you, and what I love is it’s just inspired so many people.’

The Hubb Community Kitchen meals will be made with the support of the Felix Project, which sources surplus food from cafés, restaurants and supermarkets. It is backed by the Evening Standard’s Food For Now campaign. 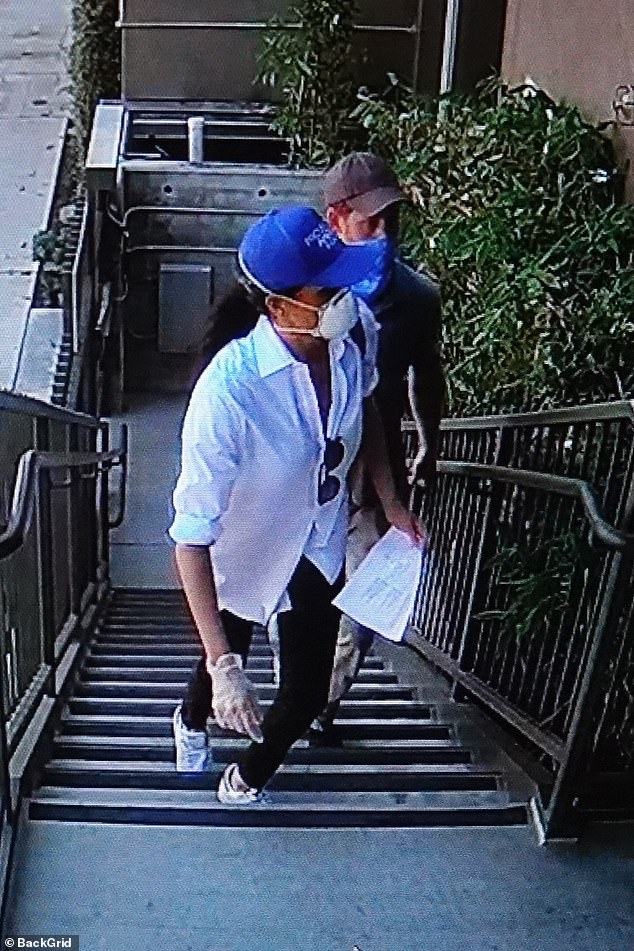 Meghan Markle, 38, donned a relaxed boyfriend shirt from LA-based brand Frank&Eileen as she stepped out to volunteer with Prince Harry, 35, in their new hometown this week

The couple, who moved to the city last month, volunteered with charity Project Angel Food on Easter Sunday and returned on Wednesday to drop-off non-perishable meals to 20 more vulnerable people in the city.

Speaking to ET Online , Project Angel Food’s executive director Richard Ayoub told how the couple contacted the charity after learning its drivers are ‘overloaded’ needed more support as they try and feed people during quarantine.

Video has since emerged showing the couple delivering food.

This week it was revealed that Prince Harry and Meghan Markle had donated £90,000 to British charity Feeding Britain to support efforts to keep vulnerable populations fed during lockdown.

The couple announced they are launching a new charitable foundation named Archewell this month.

They said they ‘look forward’ to getting started with the Archewell foundation, which will replace their Sussex Royal brand.

The pair also have plans to include their own charity as well as a website, as part of their new venture.