Meghan Markle and Prince Harry were spotted out on the streets of Los Angeles once again as they continued their volunteering work for charity amid the coronavirus crisis.

The couple were seen linking arms and holding hands as they delivered packages to residents from the back of their $35,000 Cadillac XT5, having seemingly downgraded from the Porsche SUV they had used yesterday before taking their dogs for a walk.

Both continued to wear baseball caps as well as protective covers over their mouths in accordance to the new Southern Californian regulations, which have made the wearing of face masks mandatory in the battle against Covid-19. 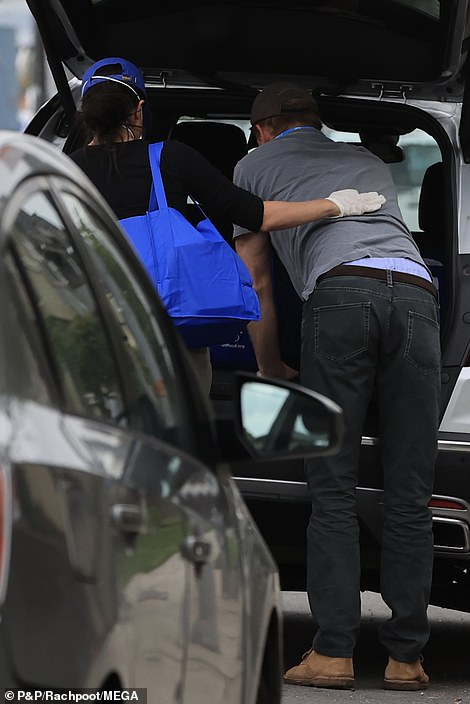 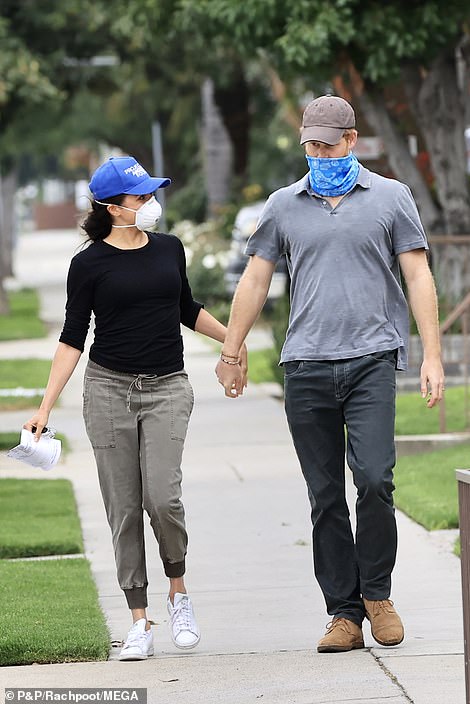 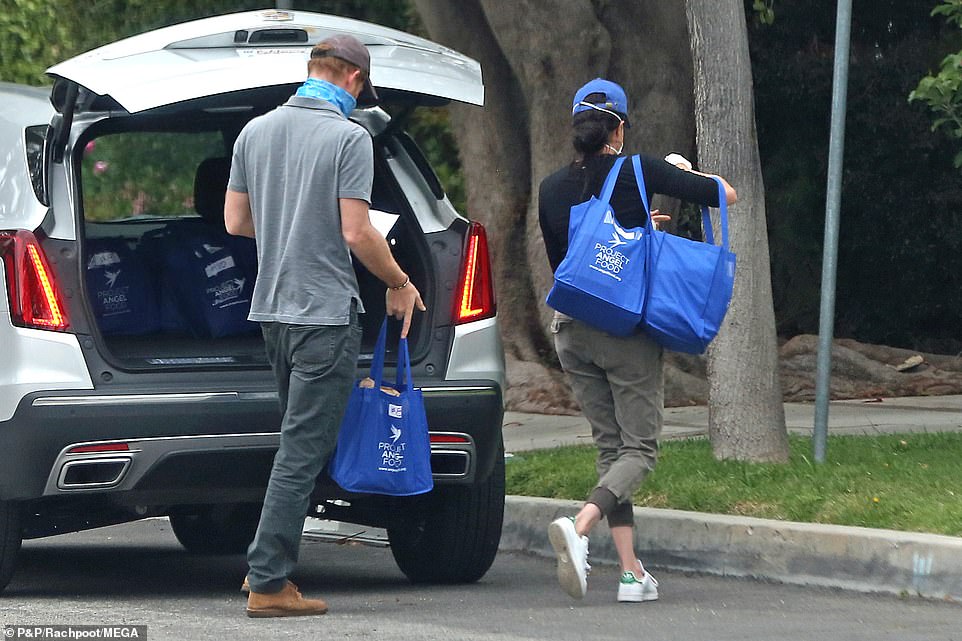 Both continued to wear baseball caps as well as protective covers over their mouths in accordance to the new Southern Californian regulations, which have made the wearing of face masks mandatory in the battle against Covid-19

It emerged earlier this week that the couple, who moved to Los Angeles with 11-month-old son Archie a month ago, have been distributing meals to the needy in LA for the Project Angel Food charity.

A source close to the couple told the Daily Mail that they had hoped to keep their volunteering private but were glad the charity was being recognised.

The Sussexes initially moved to Canada after stepping down as senior working royals on March 31 but are now forging out new lives for themselves as they set up home in California.

The couple, who were forced to give up their Sussex Royal branding by the Queen, are being bankrolled by Prince Charles for the first year of their new life. 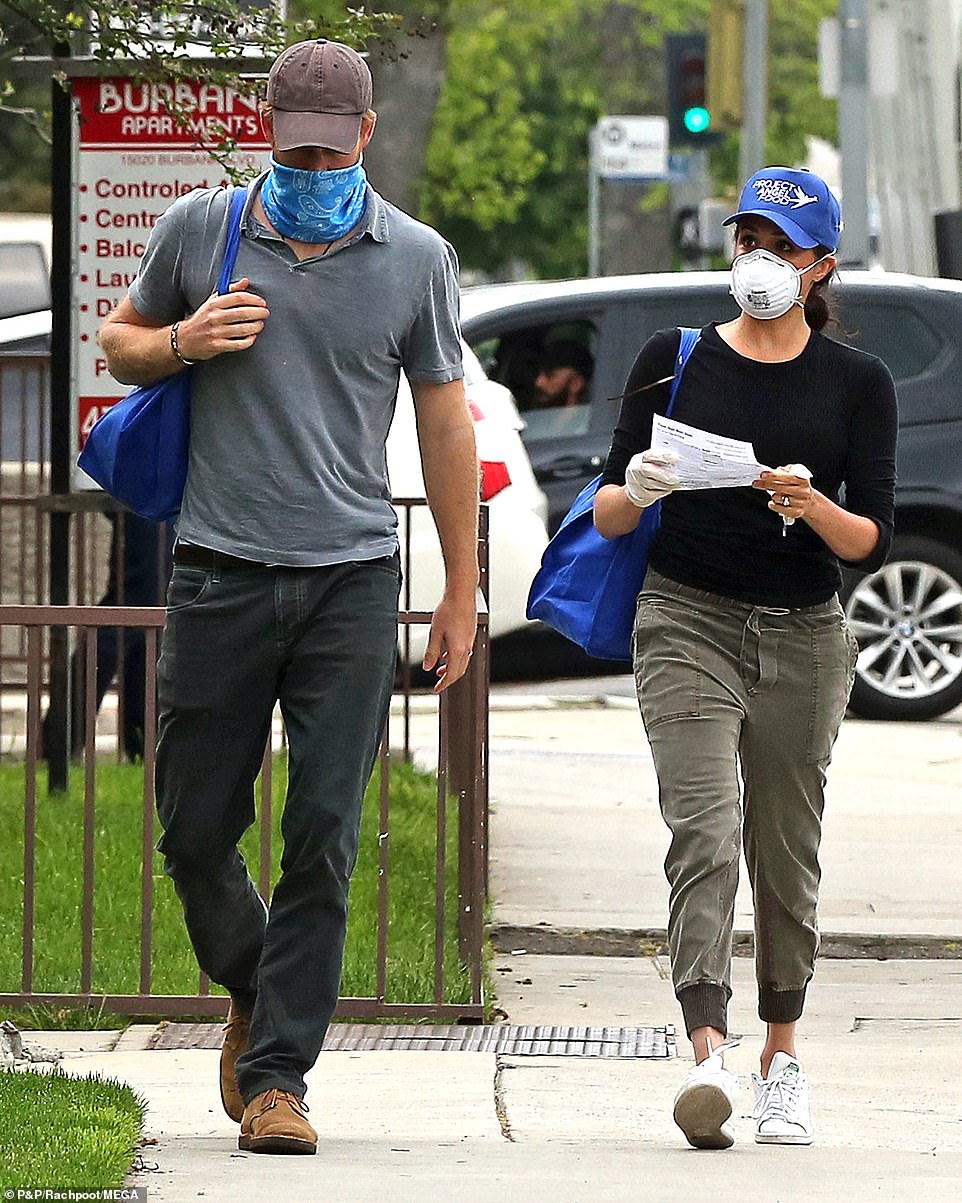 The couple walked down the street in Los Angeles wearing protective masks and baseball caps. Meghan also wore latex gloves as she clutched a sheet of paper

The latest appearance comes after the Duchess of Sussex recently carried out her first major charitable event since stepping down as a working royal – organising meals for Londoners in need.

Earlier this week, Meghan asked the Grenfell supporting women of the Hubb Community Kitchen to start a new service providing meals to families in the capital struggling during the coronavirus lockdown.

Meghan and Harry now live in Los Angeles with baby son Archie and are no longer senior royals after formally stepping away from the monarchy on March 31.

The Hubb kitchen, in North Kensington, was the first charitable project Meghan supported during her time as a member of the royal family, and after a number of private visits she encouraged the women to produce a charity cookbook to raise funds to expand their work. 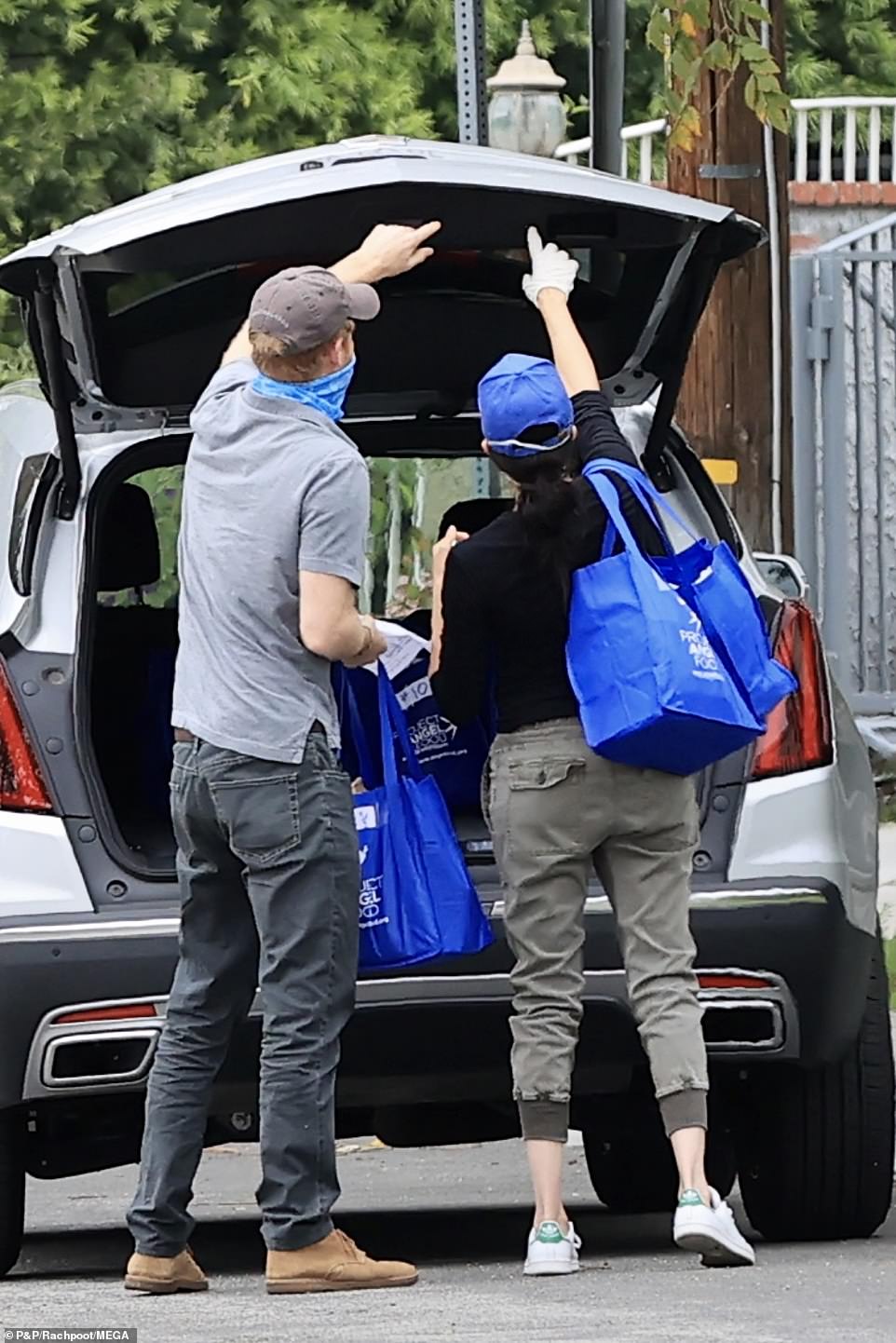 Harry and Meghan worked together as they removed packages from the back of their $35,000 Cadillac XT5 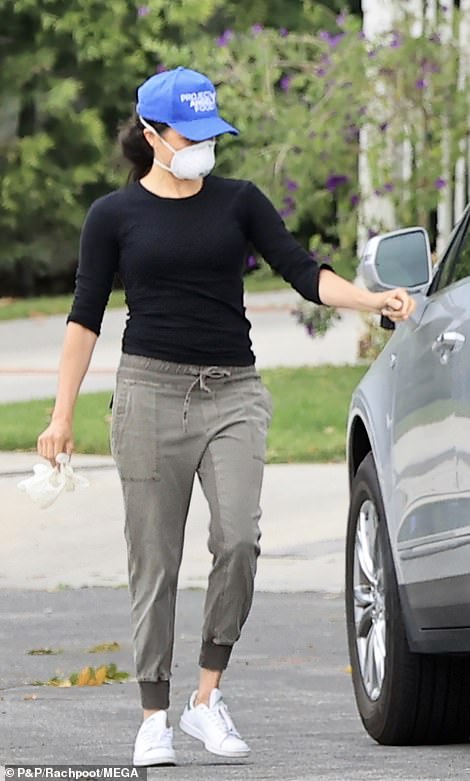 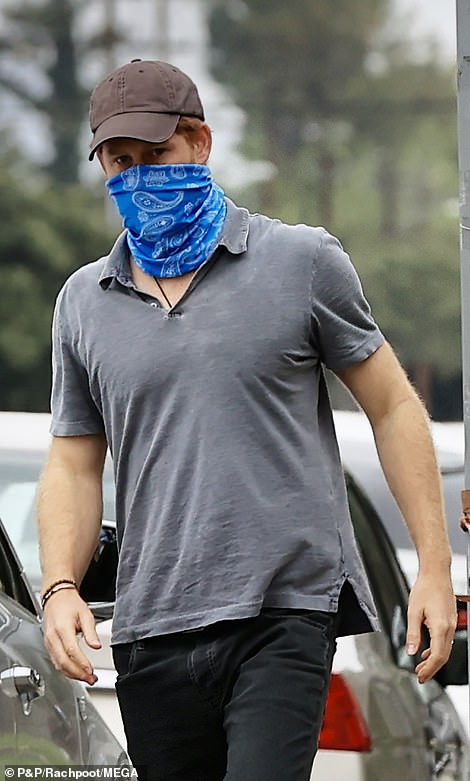 The duchess said: ‘The spirit of the Hubb Community Kitchen has always been one of caring, giving back and helping those in need, initially in Grenfell and now throughout the UK.

‘A home-cooked meal from one neighbour to another, when they need it most, is what community is all about.

‘I’m so proud of the women of the Hubb Community Kitchen, and the continued support the Felix Project gives them to carry out these acts of goodwill, which at this moment are urgently needed.’

On Tuesday, the duchess held a conference call with members of the Hubb to discuss her idea about helping to feed residents in London.

The project will be launched on Monday with the women batch cooking in their own homes and then delivering 250-300 meals to families three days a week.

Deliveries will be handled by StreetGames, one of the charitable organisations the Sussexes nominated ahead of their wedding to receive donations from well-wishers, in lieu of gifts.

Harry and Meghan have been pictured making food deliveries in America after it emerged they spent the Easter break dropping off meals to vulnerable and housebound people in Los Angeles.

The couple decided to help out after Meghan’s mother Doria Ragland told them the organisation Project Angel Food needed volunteers.

The duchess’s new project will run alongside a wider effort to supply families in need with food, and she has endorsed the Evening Standard newspaper’s Food for London Now appeal.

The Felix Project, one of London’s largest food redistribution charities, will be supplying the Hubb kitchen with produce for the meals.

Chief executive Mark Curtin said: ‘The Felix Project is proud to provide Hubb Community Kitchen with the nutritious food they need to cook delicious meals for local people for whom this service provides a crucial lifeline.

Away from Meghan’s new project the Sussexes are planning to launch a charitable organisation named Archewell.

Meanwhile, the Duke and Duchess of Cambridge revealed today that they home schooled their children during the Easter holidays without telling them – as they also spoke of their fears for Prince Charles over his coronavirus diagnosis.

Prince William and Kate said it had been ‘challenging’ to teach their three children – who they said had ‘got such stamina’, although it ‘hasn’t been all hardcore’ – but also told how they have been staying in touch with other Royal Family members using online video calls, in an interview with BBC Breakfast broadcast this morning.

Kate said of home schooling: ‘Don’t tell the children, we’ve actually kept it going through the holidays. I feel very mean. The children have got such stamina, I don’t know how. Honestly, you get to the end of the day and you write down the list of all the things that you’ve done in that day.’

She added: ‘It’s just having that bit of structure actually. And it’s great, there’s so many great tips online and fun activities that you can do with the children, so it hasn’t been all hardcore.’

William admitted he was ‘quite concerned’ for Charles after his 71-year-old father tested positive for coronavirus after having mild symptoms last month – but the Duke had been optimistic he would make a full recovery.

He also revealed he is worried about the health of his elderly grandparents, the Queen and the Duke of Edinburgh, although they have both been doing all they can to ensure they are protected and isolated at Windsor Castle.

William also said the lesser environmental impact of people not flying around the world for business had been a ‘positive’ of the pandemic, and said he hopes people will now choose to work from home more in the future.

And the couple told of their fears for the mental health of NHS staff who will be carrying some of the ‘pain, fear and loneliness’ suffered by patients, adding: ‘They’re the ones who absorb that and take it home to their families.’

The Duchess also indicated that they might call Prince Harry and Meghan Markle in Los Angeles next month to celebrate Archie’s first birthday on May 6.

Kate told how the Cambridges are using video apps to ‘share in on birthday calls and things like that’ to ensure they keep in touch with the rest of the royals.