An Italian design firm has unveiled its latest luxury yacht – and it’s designed to fly as well as sail the world’s oceans.

The dry carbon fibre structure can reach 60 knots thanks to four solar-powered electric propellers and two helium-filled blimps, allowing it to fly, hover and float on the water too.

Air Yacht stays airborne because its blimps are inflated with a gas that is lighter than air – in this case helium – while it gets momentum from its massive propellers.

It’s unclear how much Air Yacht would cost once it’s been built, although the firm says it’s designed with private owners in mind, likely those with several hundred million pounds to spare.

The Air Yacht (pictured here in an artistic concept image) features all the trappings of a prestige boat, but takes to the sky thanks to two huge blimps 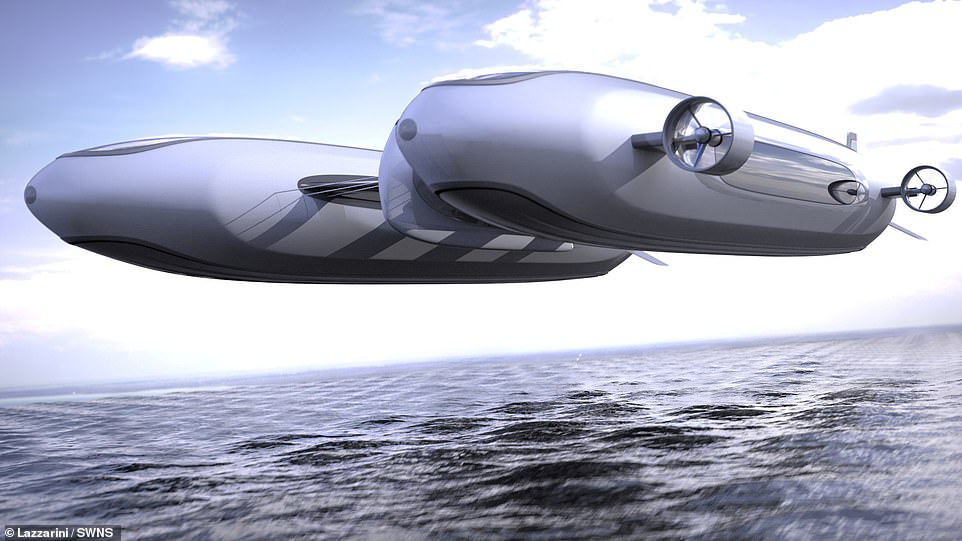 The Air Yacht features all the trappings of a prestige boat, but takes to the sky thanks to two huge blimps, which look much like zeppelins 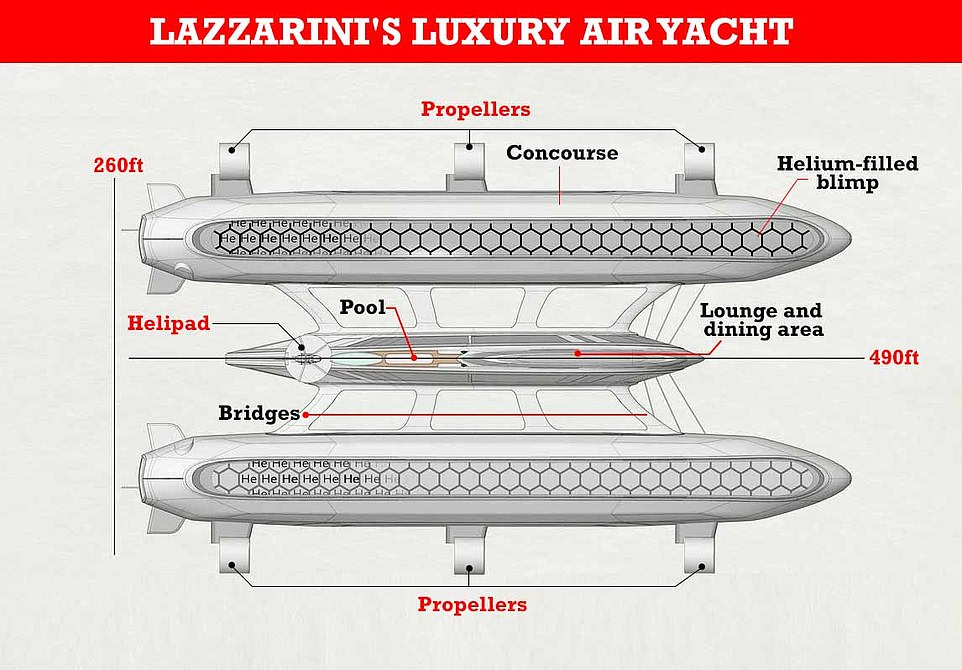 The overall length of the dry carbon fibre structure would be nearly 300 feet (150 metres), with a width of 260 feet (80 metres), while the main central deck would measure 260 feet in length and 30 feet (10 metres) wide. Passengers suites go around the concourse of both blimps

According to Lazzarini, the craft could fly at a maximum speed of 60 knots – nearly 70 miles per hour – for more than 48 hours.

‘The Air Yacht is not an airship for public transportation or touristic purposes,’ says Lazzarini Design Studio, which has posted the new renderings on its Instagram page.

‘It is conceived for a private owner with a vision of mega yacht/aviation evolution.’

Air Yacht takes to the sky thanks to two huge blimps, both of which feature central compartments inaccessible to passengers that contain the helium.

Circling around the helium compartments within the blimps are concourses and private suites containing beds and washing facilities, so that passengers can spend multiple days on Air Yacht during long voyages.

There are five suites for passengers available on each blimp side with impressive sky window views.

There’s even a wide, windowless viewing platform at the back of each blimp, which lets passengers see the waves splashing beneath them when on water, or alternatively get some fresh air at 5,000 feet when airborne. 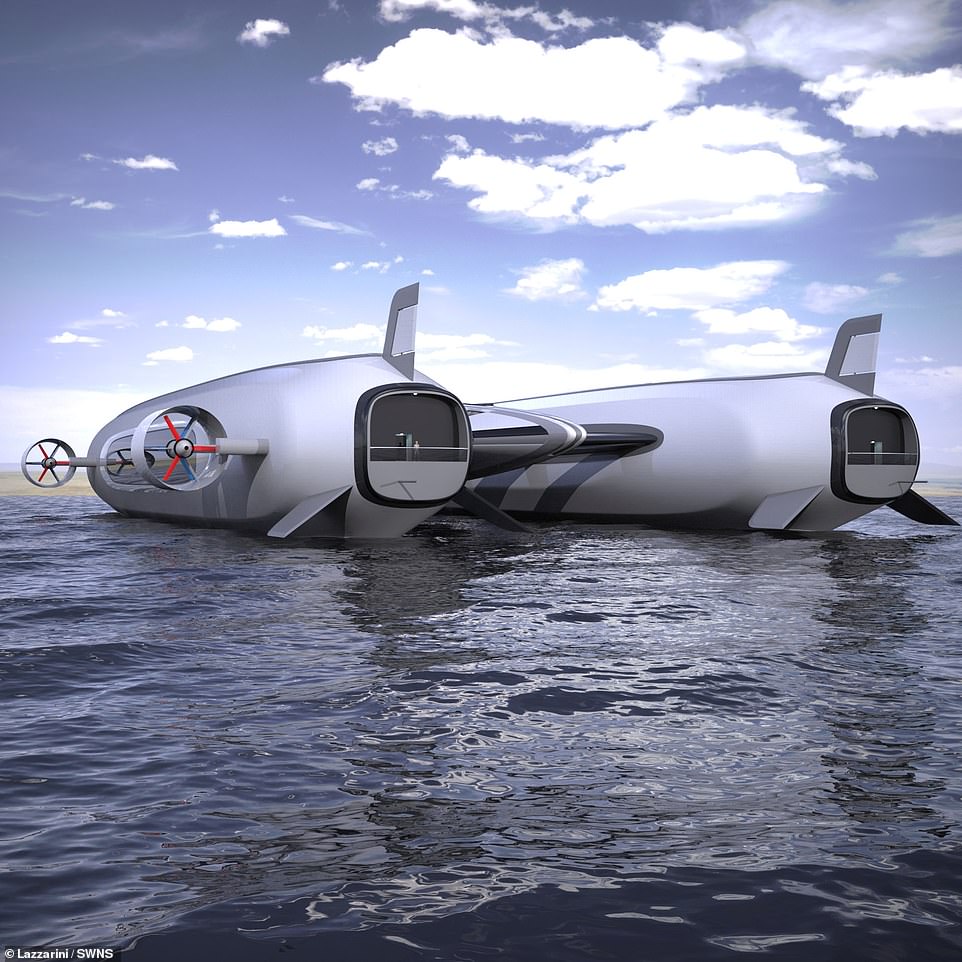 The back of the blimps (pictured) have windowless viewing platforms, letting passengers see the waves splashing beneath them, or get some fresh air at 5,000 feet 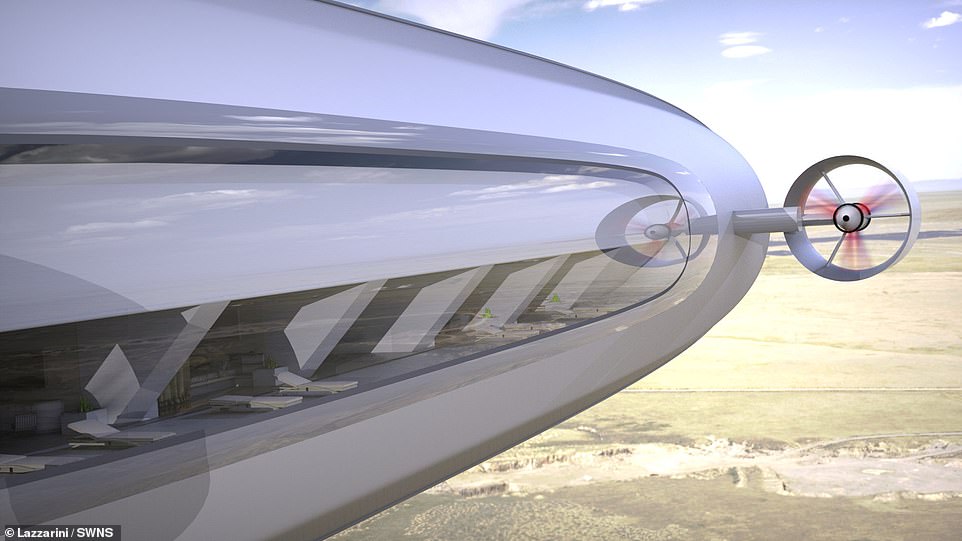 Lazzarini Design Studio’s Air Yacht features all the trappings of a prestige boat, but takes to the sky thanks to its two huge blimps

Both blimps are connected to a central compartment by four carbon bridges, through which passengers can walk.

This central compartment acts as a communal space for passengers to gather, relax and eat meals.

It provides a luxury viewing area for the passengers, featuring a swimming pool, carpeted lounge and a spacious living room with dining facilities. 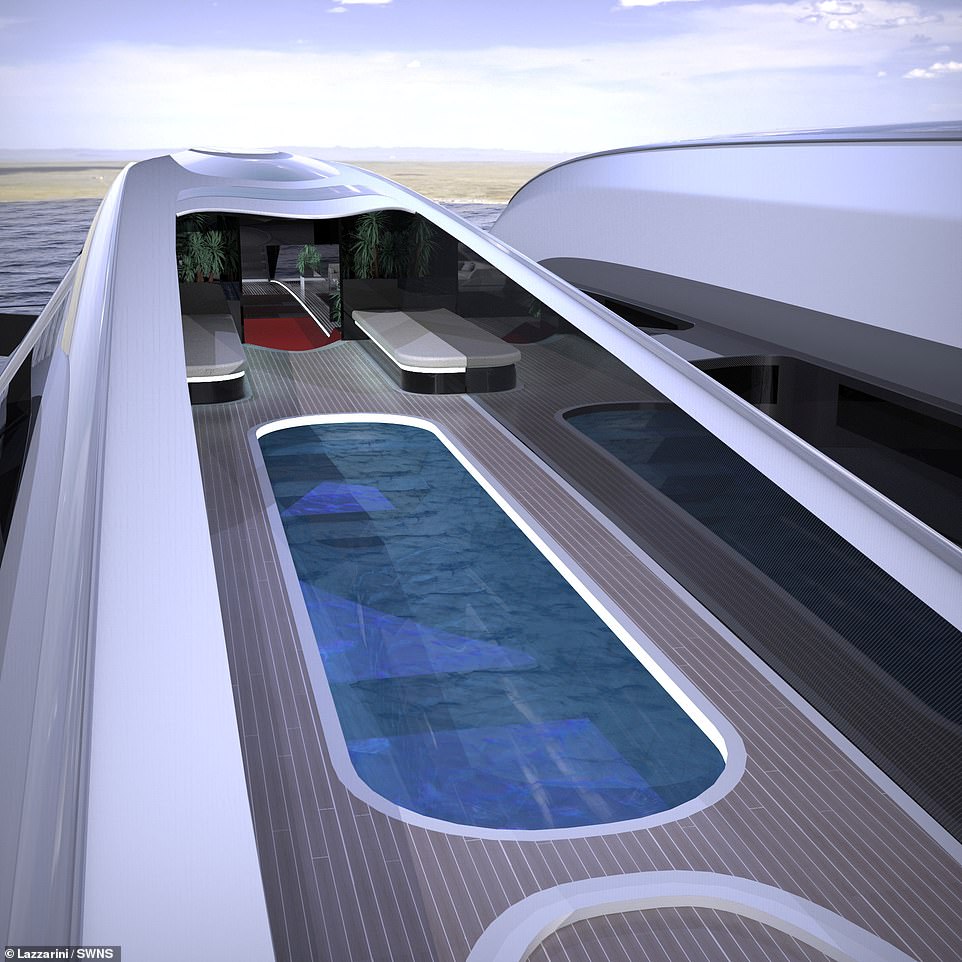 The central structure (pictured) contains a swimming pool, carpeted lounge and a spacious living room complete with a dining area 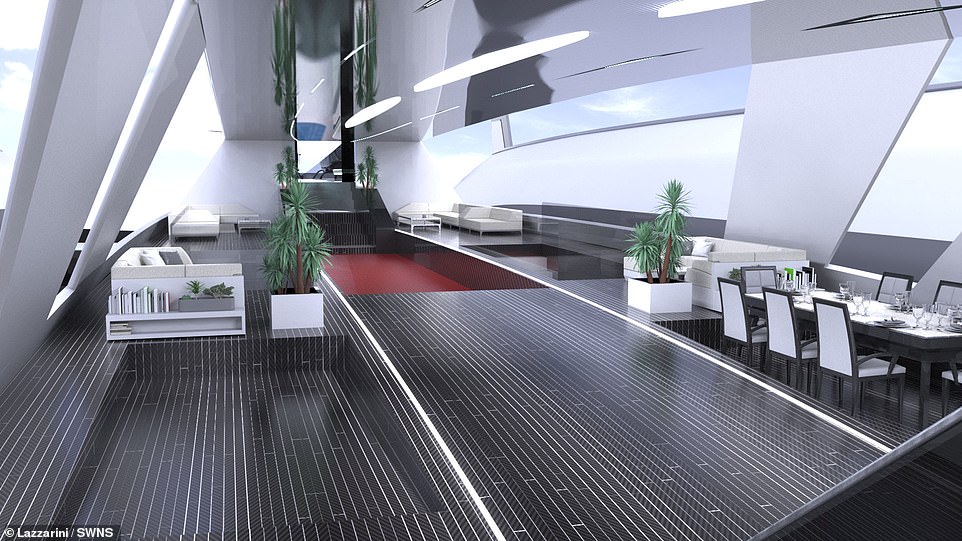 The living area has ample space for lounging with a magazine and a glass of champagne, while the dining area lets passengers enjoy a meal with the skies as their view 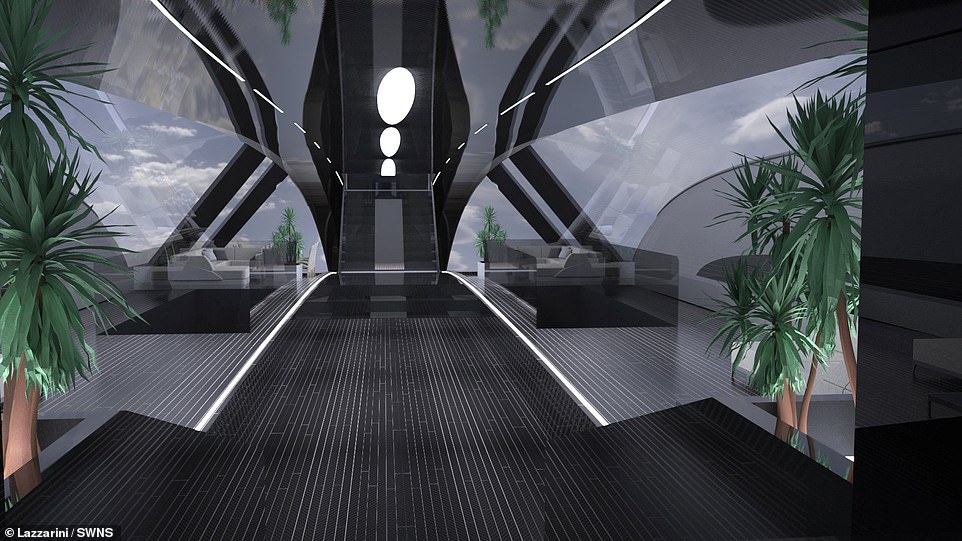 Another view inside the central compartment of Air Yacht, which acts as a communal space for passengers to gather, relax and eat meals 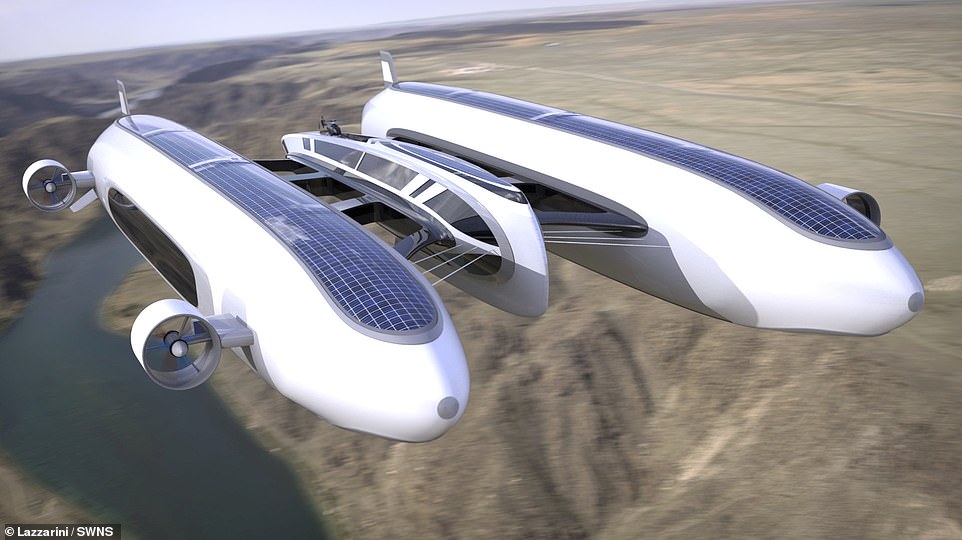 The elaborate vehicle consists of two blimps, each featuring propellers on one side and connections to four carbon bridges to a central structure on the other side

At the bottom of each of the two blimps are so-called ‘inflatable basements’ that fill up with air when approaching water, allowing the vehicle to float when required.

Lazzarini says: ‘The Air-Yacht is pushed down from the rotation of the engines and can stand in the water through a depressurisation of helium and ballast anchor system. It can sail quietly in the water with a speed of five knots.’

An optional extra allows a helicopter to rest on top of the structure for flying visits to local destinations. 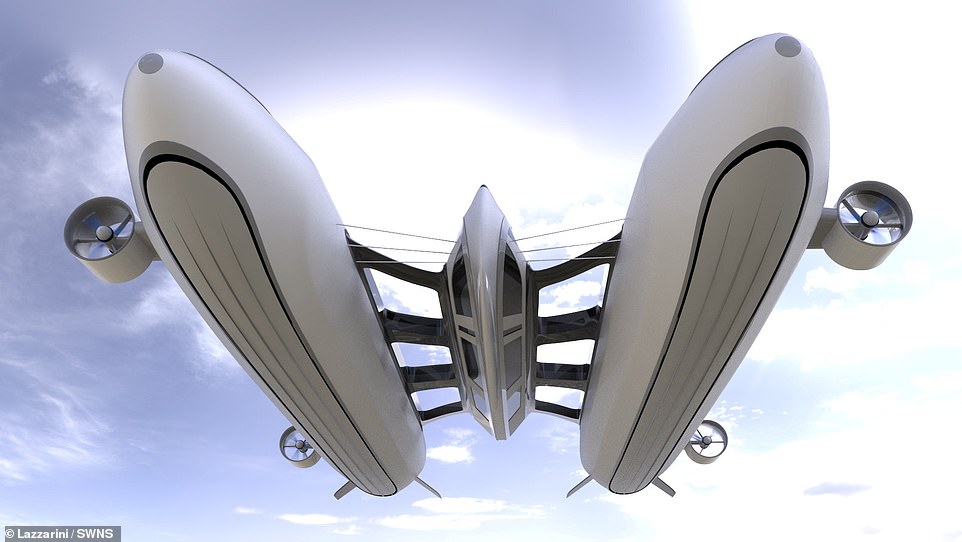 Underside of the vehicle and its two helium-filled blimps, which have ‘inflatable basements’ that fill up with air for sailing on water 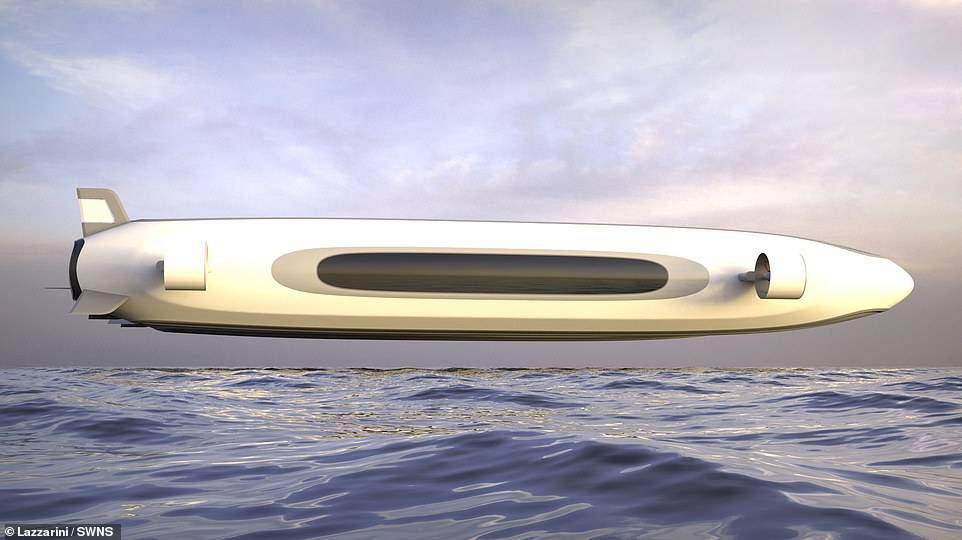 Air Yacht can reach 60 knots with its electric engines and two blimps, allowing it to fly, hover metres about the water and float too 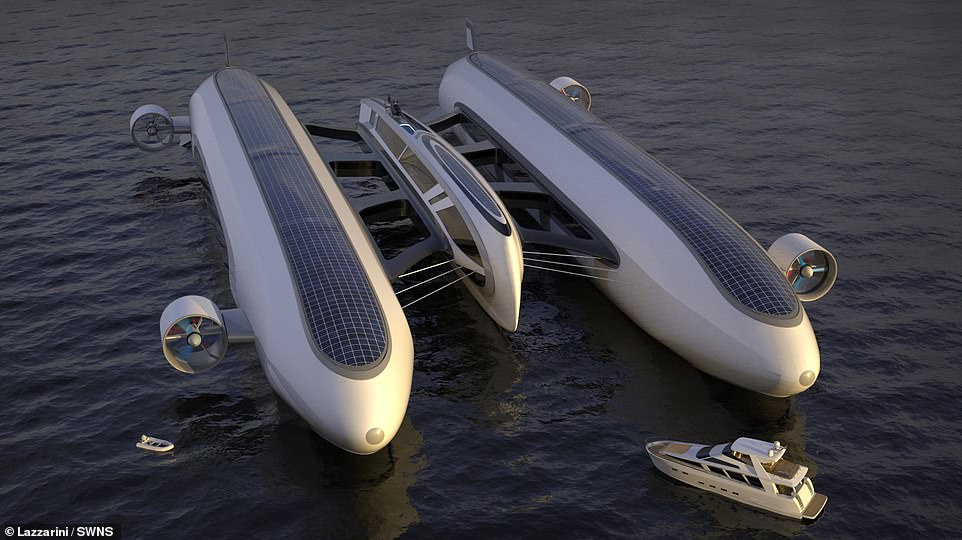 Air Yacht is not an airship for public transportation or touristic purposes; rather, it is conceived for a private owner, according to the design firm 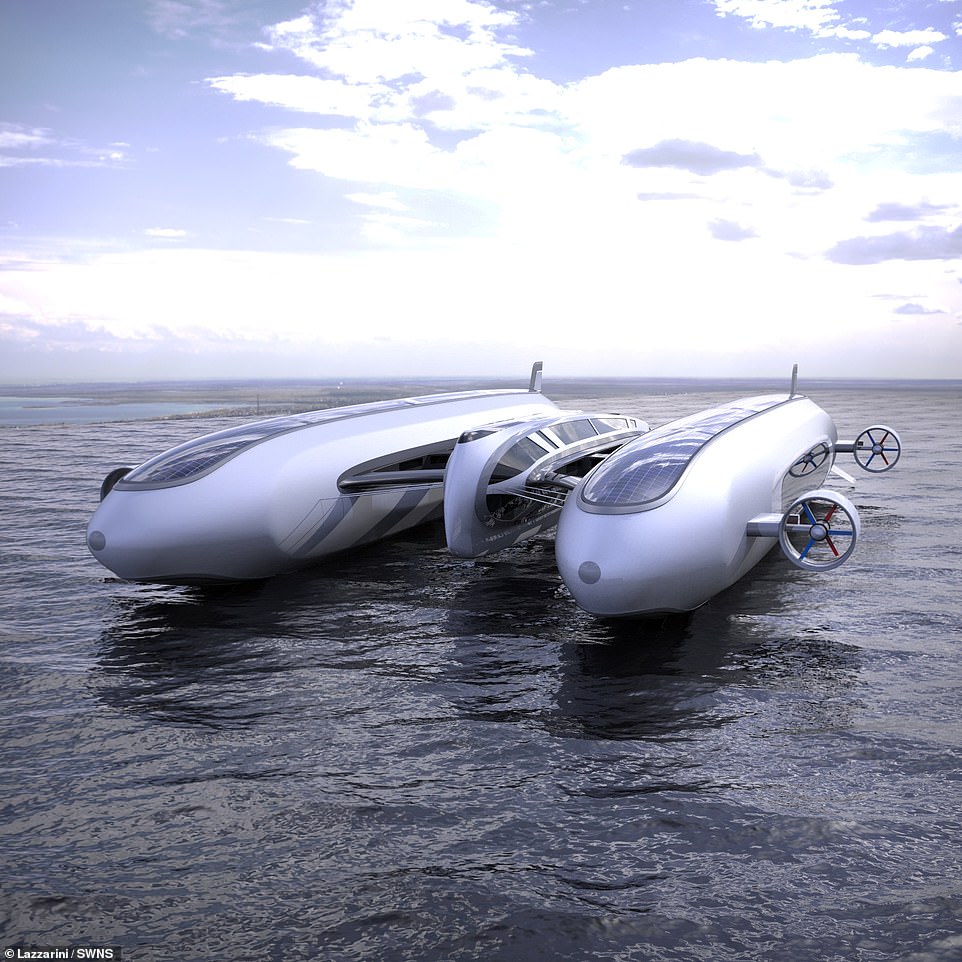 MailOnline has contacted Lazzarini Design Studio regarding how much it would cost to build the Air Yacht, pictured here on water 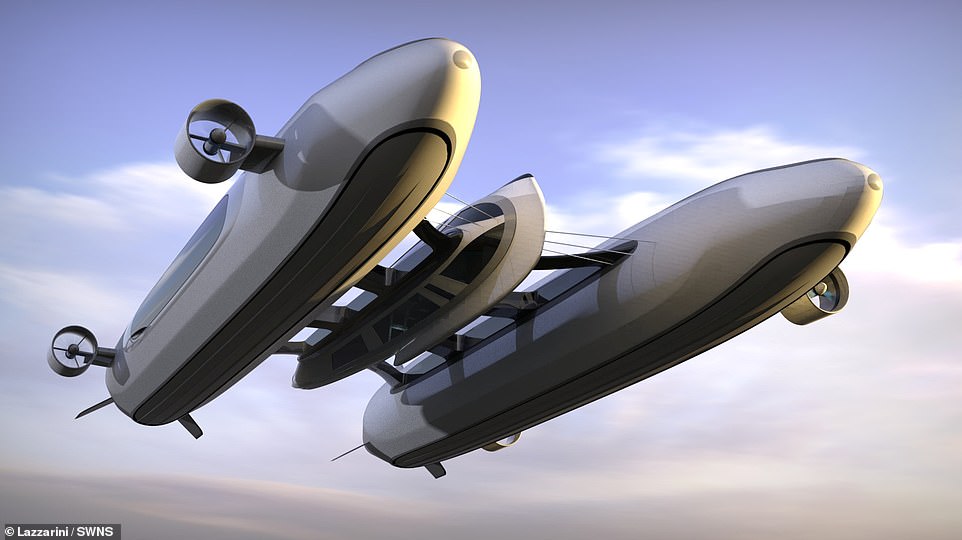 The overall length of Lazzarini’s dry carbon fibre structure is 492 feet (150 metres), with a width of 260 feet

Lazzarini is frequently unveiling lavish concepts without actually building them, so it’s possible that Air Yacht may prove too expensive to ever become a reality.

MailOnline has contacted the firm for comment regarding how much it might take to build, and whether it’s had any interest from any so-called ‘private owners’.

The firm is also responsible for a swan-shaped superyacht, a £450 million shark-inspired mega-yacht, and a sleek yacht with a gaping hole in the middle.