EXPRESS INFORMER > News & Politics > Meeting Michael: How a pin dedicated to a fallen WW I soldier is heading from the U.K. to N.L.

On an overcast day in mid-October, an elderly man walked into the Royal Canadian Legion in Portugal Cove-St. Philips, about 14 km west of St. John’s.

The 87-year-old was anticipating a video call with someone from across the Atlantic Ocean — a man he’d never met.

It turns out the two have something remarkable in common: a connection to a Newfoundland soldier who died in one of the most notorious battles of the 20th century.

They were speaking because of an unusual request one of them brought to the CBC. Luis Revaliente, who lives in the small town of Willingham, U.K., approached the CBC looking for help in tracking down a living relative of a Newfoundland Regiment soldier who died in the First World War.

In 2016, Revaliente purchased a special poppy pin commemorating the 100th anniversary of the Battle of the Somme, as part of a fundraiser for the Royal British Legion. On July 1, 1916, the first day of battle, close to 20,000 British troops lost their lives and more than 38,000 were wounded.

It was also a detrimental loss for the Newfoundland Regiment stationed in Beaumont-Hamel, France — of the approximate 800 troops that went into combat, more than 300 were killed, or missing and presumed dead, and almost 400 were wounded. Only 68 survivors emerged for roll call the next day.

Now, a century later, farmers plowing those former battlefields are still unearthing millions of brass shell fuses. A collection of those fuses was melted down and used as donor metal to create the pins. Dirt collected from the fields was mixed with enamel to make the red centres.

When Revaliente saw the pins, he said he felt compelled to buy one.

Each individual poppy was dedicated to the memory of a soldier who had paid the ultimate price that day. Of the 19,240 poppies that were made, Revaliente’s pin bears the name of Pte. Michael Joseph Jackman from Bell Island.

“I thought it would be so fantastic if we could actually find the family of the soldier and bring the poppy and his family together,” Revaliente said. “I’m just absolutely delighted and ecstatic that we can actually do this… It’ll be emotional, definitely, for me.”

Who was Pte. Jackman?

Michael Jackman was born in 1895, and grew up on Bell Island in Conception Bay west of St. John’s. He was the son of Catherine and David Jackman, a merchant and tinsmith.

Michael Jackman worked as a clerk at his father’s store on Bell Island, where he made $35 a month. He was also part of the local Catholic Cadet Corps and attended St. Bonaventure’s College in St. John’s.

On Dec. 8, 1914, the 19-year-old with dark brown hair and grey eyes was deemed fit for foreign service, and 10 days later, Jackman was officially enlisted.

In early February 1915, Jackman embarked on the SS Dominion in St. John’s with “C” Company. He and his fellow soldiers spent time training in the United Kingdom before the 1st Battalion of the Newfoundland Regiment was ready for active service.

In September 1915, the group was sent to Suvla Bay on the Gallipoli Peninsula in Turkey, where they faced harsh weather conditions, flies, dust and disease.

Just days after landing there, Jackman was diagnosed with dysentery and transported to a hospital in Cairo. He would stay there for almost three weeks before heading back to his fellow troops.

When the British evacuated the Gallipoli Peninsula in 1916, the Newfoundland Regiment eventually travelled to France, where they trained for combat. But nothing could have prepared them for what they faced that fateful day in Beaumont-Hamel.

A botched plan gave the Germans ample time to prepare their machine guns for the Allies’ land attack, and the troops were ravaged by bullets, which killed or wounded most of the men within minutes.

Pte. Michael Jackman was declared missing, and by the end of the year, was presumed dead. His body was never found.

Carrying on the Jackman name

The Royal Canadian Legion in Portugal Cove-St. Philips is located just a couple of kilometres away from the ferry terminal to Bell Island.

Its large, rectangular hall was empty on this fall day. There were several long, white tables set up with chairs. Dart boards lined two of the walls, with war memorabilia placed in the spaces between.

Two CBC journalists started setting up a laptop on a nearby table for the transatlantic video call to take place. Then an elderly man approached and introduced himself.

Jackman, 87, is originally from Bell Island, but now lives in Portugal Cove-St. Philip’s. He was named after his deceased uncle. His middle name, David, is for his grandfather — Pte. Jackman’s father.

Jackman said there wasn’t a lot of talk about his namesake when he was growing up.

“[He] was just always referred to as ‘Poor Mike,'” he said. “Dad never mentioned him very much … Dad was probably quite taken up with Mike, and I think he took his death pretty hard.”

Jackman said his uncle and the other young men of the Royal Newfoundland Regiment gave the greatest sacrifice.

“They died to make life better for us,” he said. “That’s why we’re here today, because of… these young people. And they died a terrible death.”

Like his uncle and his father before him, Michael Jackman grew up on Bell Island, and later attended St. Bonaventure’s College in St. John’s. He went into the military in the 1950s, and spent a couple of years serving overseas with the air force in Europe.

When the mines on Bell Island closed in the 1960s, Jackman packed up and moved to Ontario, where he and his wife had two sons, and later, two grandsons.

They moved back to Newfoundland 20 years ago, and Jackman said they haven’t looked back since.

Jackman settled in and the video call to the U.K. got underway.

“Hi there. Nice to meet you,” Revaliente said from the screen, sitting in his house in Willingham.

Revaliente said the timing worked out perfectly, since that day happened to mark the start of the annual poppy campaign in his country.

He explained how he’d bought the commemorative poppy pin four years ago.

“So basically, the reason why I’m here is, I would like you, on behalf of me and of my family — would you accept the poppy?” Revaliente said. “I would be so pleased for you and your family to take it.” 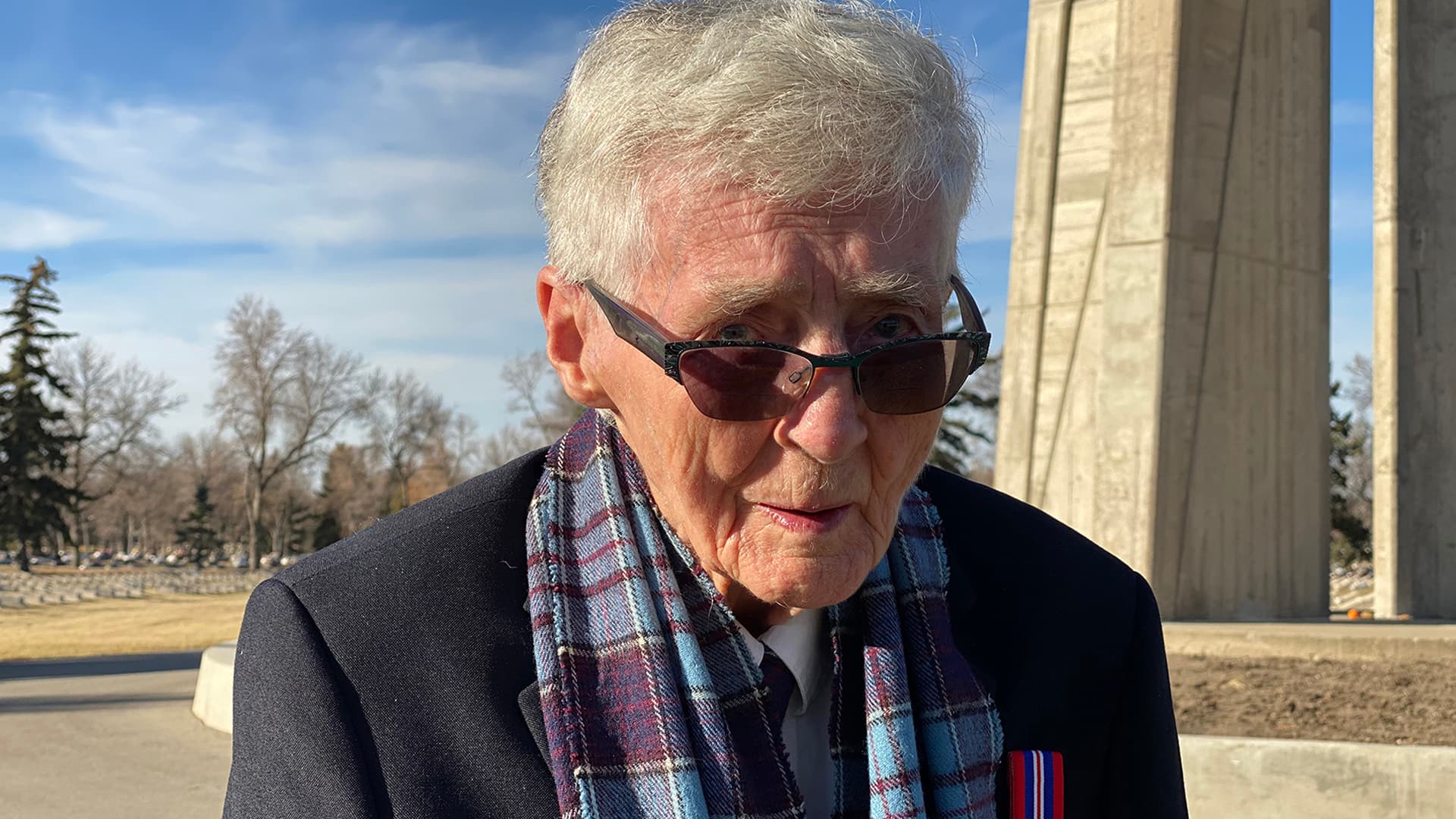 Veterans and their families are finding ways to mark Remembrance Day despite the pandemic forcing the cancellation of traditional ceremonies. 4:10

Revaliente showed Jackman the poppy on the webcam.

“It’s very, very unique,” he said. “Basically, the actual poppy has been made from First World War artillery shells.”

Jackman leaned into the screen for a closer look. “I’ll be darned.”

Revaliente explained that it’s something he has meant to do for years, and that he was glad to finally turn his plans into reality. “I’m really pleased that we’ve made contact. It means a lot to me,” he said.

That’s when Jackman revealed his name.

“That’s amazing,” he said. “My actual name is Luis Miguel — because my parents are Spanish. My second name, Miguel — that’s actually Michael as well … So it’s great.”

Both men smiled as the conversation came to a close.

“Once again, thank you, and I’m honoured,” said Jackman. “And I’ll see that it gets a good home out here.”

A piece of family history

After the video call ended, Jackman said he thought it was an excellent conversation.

“The thought that [others] haven’t forgotten us after 100-plus years,” he said. “It’s sort of heart-lifting, you know, that these boys didn’t die in vain. And the reason we’re here today is the fact that they did die for us. So I’m impressed. That was great.”

Jackman said it feels good to know a piece of his family’s history will be coming home from across the Atlantic. He’s excited for his cousins to see it.

He plans to display it at the Royal Canadian Legion in Portugal Cove-St. Philip’s.

“Probably on one of the walls here,” he said, eyeing the room. “Yeah, we’ll find a place for it. Excellent.”