When actress Suranne Jones — of Doctor Foster fame — recently revealed that she and her husband, screenwriter Laurence Akers, sleep apart, many were shocked.

It’s often assumed that separate sleeping arrangements are the first sign of a marriage in trouble. But for some it is the marital ideal.

Here, three couples who have his-and-hers boudoirs tell HELEN CARROLL why separate bedrooms may actually be the secret to a happy marriage.

It’s often assumed that separate sleeping arrangements are the first sign of a marriage in trouble. But for some it is the marital ideal

I do let him stay in my room – but not often

Lesley Thomson, 53, a magistrate, and her husband, Scott, 58, a business analyst, have been married for 12 years and have separate bedrooms at their Cheshire home.

Scott and I have had separate bedrooms for two years and it suits me perfectly.

His, by contrast, is very spartan and a bit of a dumping ground for things I don’t want to see, like the 3D models of cities he likes to build.

I have an en-suite shower room, where I keep all my face creams and make-up, while Scott uses the family bathroom.

Throughout our marriage we had always slept in the same bed but things changed after I turned 50.

I went from being able to sleep through anything to suffering terrible insomnia and so when we shared a room I was lucky if I slept for three hours a night.

Anxiety and night sweats, both brought on by the menopause, would wake me in the early hours, and the sound of Scott’s snoring made it impossible for me to get back to sleep.

Frustrated, I would dig him in the ribs and hiss, ‘Go into the spare room!’ After a few months of this, I said to him, ‘Wouldn’t you prefer to start out in there, instead of always having to move in the middle of the night?’ 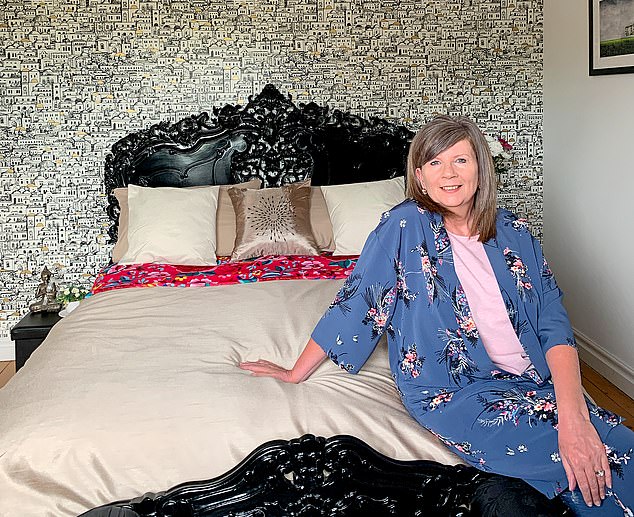 Lesley Thomson, 53, a magistrate, and her husband have slept in separate bedrooms for two years

He was quite upset initially. He sees it as an important part of a marriage to sleep together.

But I felt it was just as important for our marriage for me to get a good night’s sleep and not be anxious and grumpy.

I persuaded him to sleep in the spare room on weekday nights, and it soon became a permanent set-up.

After a few months, we went shopping for a new mattress for ‘his’ bed. We agreed to try a few out and we bought the one he liked best.

He was in a bad mood that day, claiming this was another unwelcome step towards permanency. I had already moved his clothes into the spare wardrobe.

Now, we’ve got a nice routine. We often go to bed at 9pm and spend an hour watching TV in my room, having a bit of a cuddle.

Sometimes he will say, ‘Can I sleep in here tonight?’

Most of the time I say ‘No’ — but every now and again I’ll give in. At weekends he will get up when he hears I’m awake, make coffee and bring it to my room, where we will have a chat and a cuddle.

Scott would prefer to go back to sharing a bed but I’ve got used to having my own bedroom now. And I don’t love my husband any less just because we sleep apart. 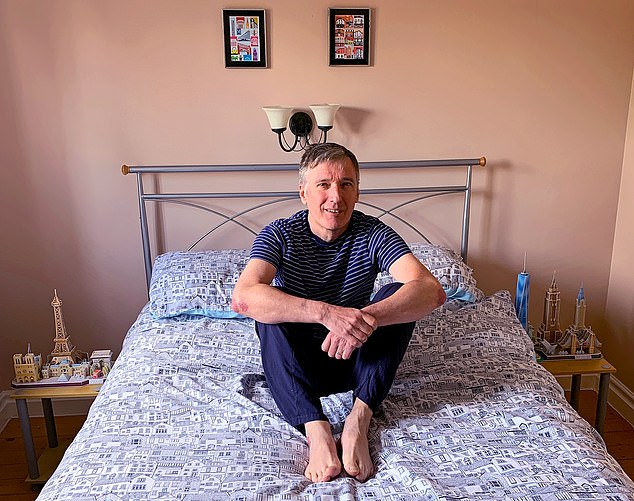 Scott, 58, a business analyst, would prefer to go back to sharing a bed but Lesley says she has got used to having her own

I find it sad that we no longer share the marital bed, and I guess that’s one reason I never refer to the room I sleep in as ‘my bedroom’ but as ‘the front bedroom’.

It would feel too permanent otherwise. I still hope that, once Lesley’s sleeping improves, we can go back to sharing again.

Lesley has tried to make the front bedroom as homely as possible, by buying paintings of scenes of Manchester, my favourite city, for the walls but I only ever go in there to sleep — never to relax or watch TV.

I don’t make a big deal about it because I’m happy with all other aspects of our relationship. But if she said I could move back into the marital bed I wouldn’t hesitate.

Star Wars posters on the wall? No chance

Libby Ash, 24, an account manager for a PR company, moved in with partner David Richards, 26, an electrical engineer, three years ago.

They are renting a house in Yeovil, Somerset, where they have separate bedrooms, and are saving for a deposit for a mortgage.

When David’s housemate announced he was moving out in 2017, we’d been dating for three years and decided it was the perfect opportunity to live together.

While we love one another’s company, we both also like our own space, so decided that I would take the bedroom his friend had vacated on the first floor.

I’ve always been a light sleeper and David works shifts — he’s either up at 5am, to start at 6am, or not coming to bed until 1am after finishing at 10pm — so, either way, he’d be bound to disturb me. We’re both wise enough to know that would inevitably lead to rows.

However, our arrangement doesn’t get in the way of our love life. In fact, I think it means we’re less likely to take one another for granted. 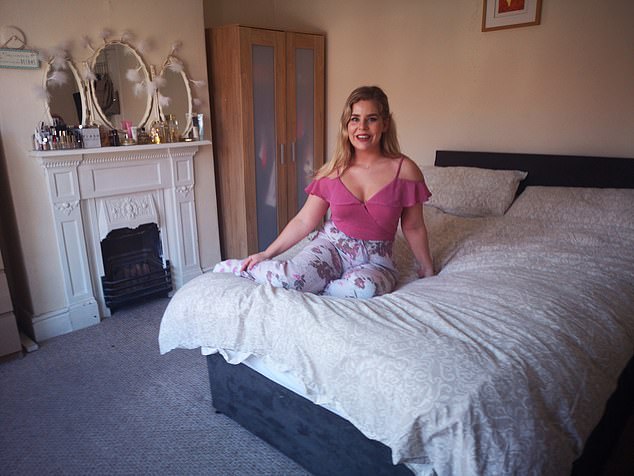 Libby Ash, 24, an account manager for a PR company is a light sleeper and her partner David works shifts so they decided to sleep in separate rooms to avoid rows

You make more of an effort when you’re not under each other’s feet all the time. Tuesdays, when David finishes work at 2pm, and Fridays are dedicated ‘date’ nights. We cook and eat dinner at home or, before lockdown, would go out to a restaurant.

He has a smart TV in his bedroom so I take my toothbrush into his en suite, and we round off the evening watching a film or series and I’ll then spend the night in his bed.

David snores and, when I try to roll him on to his side or give him a nudge in the night it makes him grumpy, so if it becomes a problem, I’ll creep out and go up to my own room.

I like things to be tidy, so it’s great to find it just as I left it — clean and in order.

My room is very feminine. I have fairy lights, pretty little mirrors, a nice rug and cotton bedsheets while David’s is like a man cave: all dark bed-sheets.

He even has Star Wars posters on the walls, for heaven’s sake!

I also have my own bathroom, where I can leave all my perfumes and moisturisers, and I never have to put up with shaving hairs in the sink.

When we tell people we have separate bedrooms, they are intrigued. 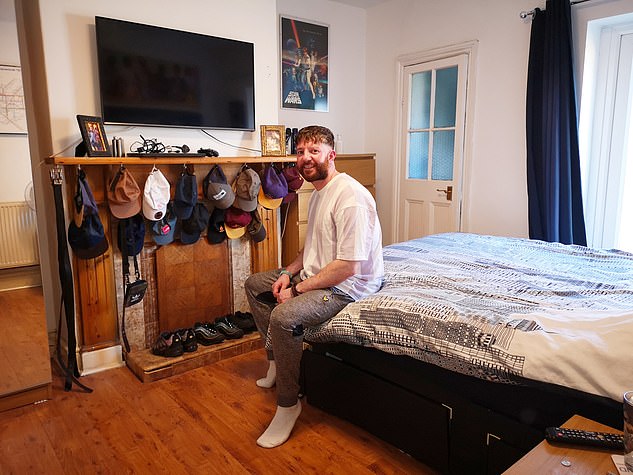 David Richards, 26, an electrical engineer, asked Libby to move in with him when his housemate moved out

Of course, they ask about the sex but I explain that we have two nights a week when we’re together and that makes it more special. I think some probably envy us.

Some of my friends think it’s a bit odd — but I think we get the best of both worlds. We spend lots of time together but also have our own space to do what we want, so I’m not sure it will change, even if I stopped working shifts.

I can watch Star Wars films after a late shift, which Libby wouldn’t want to do.

I never stay over in Libby’s room because it gets too bright in the mornings, whereas I have a black-out curtain to keep the sun out.

I definitely keep it tidier than I would if Libby didn’t join me in there. If we shared a bedroom, I’m sure she would object to me having all my football memorabilia, weights and aftershave lying around.

Our little dog is on my bed, and Brian’s in his man cave

The couple, who don’t have children, married in their 20s before divorcing, then remarrying 13 years ago. They have had separate bedrooms for nine years.

I will never forget a boss I had in my 20s telling me, ‘I love having sex with my wife but I don’t like sharing a bed with her because there’s nothing more important than a good night’s sleep.’ 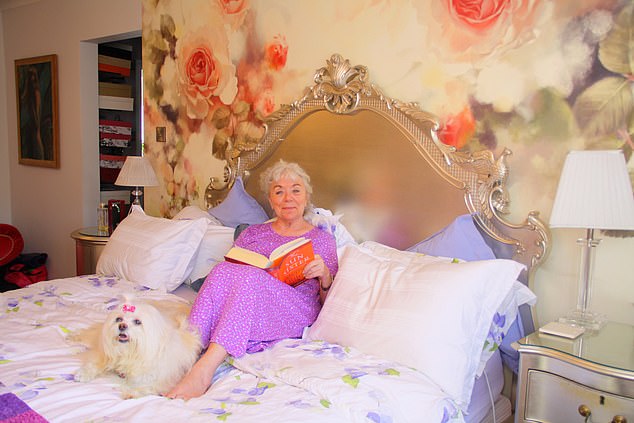 As a young woman, I thought, ‘How unromantic — I’ll always sleep with my husband’ — but now I realise how wise he was.

Even my widowed friends tell me that, while they miss their husbands, they don’t miss sleeping with them.

Brian is a starfish sleeper, his arms and legs stretched out at angles, so I’ve spent many a night pushed to the edge of the bed, gripping on to the side of the mattress.

That was bad enough but in 2011 he got a new job, which meant commuting into London — and a 5am alarm.

Our dog, Princess Honey Doodle, a fluffy, white Lowchen, has always slept on our bed and he would wake us both, so Brian agreed to sleep in the guest bedroom.

He put a TV on the wall — he likes to watch sport at night and I hate having a TV in the bedroom — and installed a stereo system, with headphones, turning it into his man cave.

My room, always quite feminine, became even girlier. I bought a cerise chaise longue and flowery bedding. And I’ve got a king-size, ornate bed. 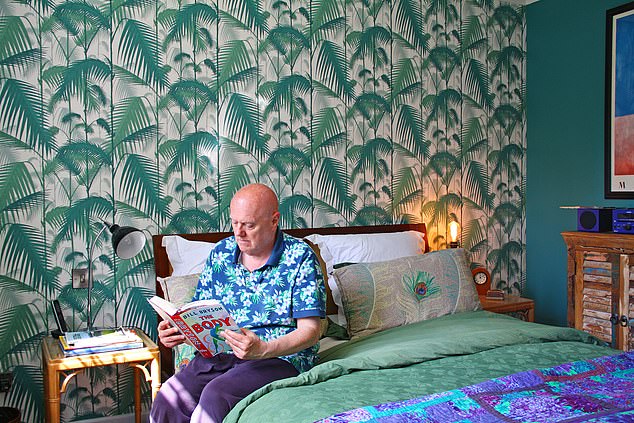 Mary says he husband Brian, 68, a process engineer is a starfish sleeper and she spent many nights on the edge of the bed

When we moved, in 2018, into a five-bedroom bungalow we had been so happy with the set-up we didn’t consider sharing a room.

I have the big bedroom, with a walk-in dressing room and en suite, and a beautiful rose mural.

Sex can still be part of your relationship. You don’t have to be in the same bed every night.

I’m a restless sleeper and Mary isn’t, so I’m glad I no longer have to worry about disturbing her.

We share a bed, always a king-size, on holiday, which is nice, but it works better for us in our daily life to sleep apart.

We’ve done it for so long I think she’s got used to it — and it means I can watch football on TV before I go to sleep. It works for us and we’re no less loving.

It’s not something I talk about to other people, so I’ve no idea what their view would be.