Meet the Aussie Commonwealth Games star with 1.5MILLION TikTok followers and almost a BILLION views on YouTube – diver opens up on balancing competition with life on social media

With 1.5million TikTok followers and nearly a billion views on his YouTube channel, Sam Fricker is the very epitome of the modern-day athlete refusing to confine himself to the limitations of his sport alone.

The Australian diver – who finished 28th in the Men’s 10m platform in Tokyo last year – is aiming to add to his country’s medal collection at the Commonwealth Games this week.

Just as Fricker is required to show mind-boggling levels of flexibility when launching himself from the diving board, the 20-year-old has stamped himself as one of the most multi-faceted talents in the world.

Since competing in Tokyo, Fricker has amassed a huge social media following and his meteoric rise online has convinced him to go full-time with YouTube videos.

He first rose to fame on TikTok while promoting his business – an eco-conscious straw manufacturing firm which makes straws from wheat stems – a company he founded while still at school.

The Sydney Morning Herald describes Fricker as a ‘walking billboard for clean living and positivity’, but that still hasn’t prevented the Australian from receiving abuse online.

‘Trolls? I get tons of hate but who cares’ he said in Birmingham. ‘I don’t care. If my friend came up to me and said, ‘Hey Sam, you shouldn’t do that’, then he’s probably right and I’ll listen.

‘But if some person with no profile photo and zero followers is telling me I’m bad at diving, am I really taking that on board? People say anything: they say I can’t dive, they make fun of the way I talk.’

There has been an apprehension among coaches and experts as to the potentially negative influences that ‘side hussles’ can have on an athlete’s career. 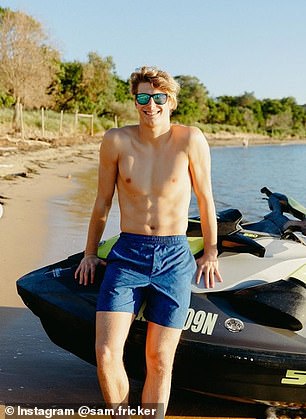 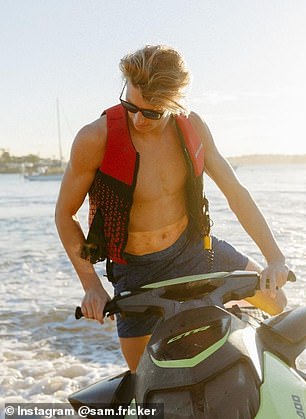 Roy Keane famously lambasted Jesse Lingard for taking his eye off the ball with his fashion exploits, while Mesut Ozil is pondering ditching football altogether for a career in professional gaming.

But Fricker insists that his coaches are onboard with his social media career, adding that his huge following online can only be positive for diving as a sport.

‘My coaches are coming around to it,’ he said.

‘I’m going to be doing what I’m doing, so they’ve come to support and understand that. And it’s really good for the sport. Diving doesn’t get much attention like other sports so it’s a cool opportunity to share what we do. And it helps my diving.’