EXPRESS INFORMER > News & Politics > Meet Stormy Daniels’s doll, Susan, who’s haunted by the spirit of a girl who died in the 1960s

Stormy Daniels has reinvented herself as a psychic and is traveling the country for a documentary, accompanied by Susan – a doll she calls ‘one of the most unique haunted objects in the world’.

Daniels takes Susan with her as she criss-crosses the country investigating paranormal activity for a VH1 television show.

She has set up a website for Susan, saying she was owned by a girl who died in the 1960s and bought by someone named John in 2011.

‘Susan has always had an intensity to her, affecting those in her presence,’ her website states.

‘She has made Marines jump, individuals cry and even John question his sanity.

‘It was not until Susan interacted with Stormy, however, that she became truly active and began to excel in the form of communication and even movement.

‘Witnesses have heard Susan speak, seen her eyes shift and even her physical body pivot and move. And yes, we have it documented.’

An Instagram page set up for the doll in August 2020 documents her travels with Daniels and her friend Justin Loupe, a horror-rock musician from New Orleans-based band Deadsled Funeral Co.

Daniels and Loupe formed their paranormal investigation company, Spooky Babes, after Daniels, from Baton Rouge, Louisiana, moved to New Orleans just before the start of the pandemic and found herself renting a house she believed to be haunted.

She immersed herself in alternative theories, and her business was born.

Daniels and Loupe have taken Susan across the country, with stops in Mississippi, Kansas and Texas.

Daniels with her doll Susan, who she says is haunted 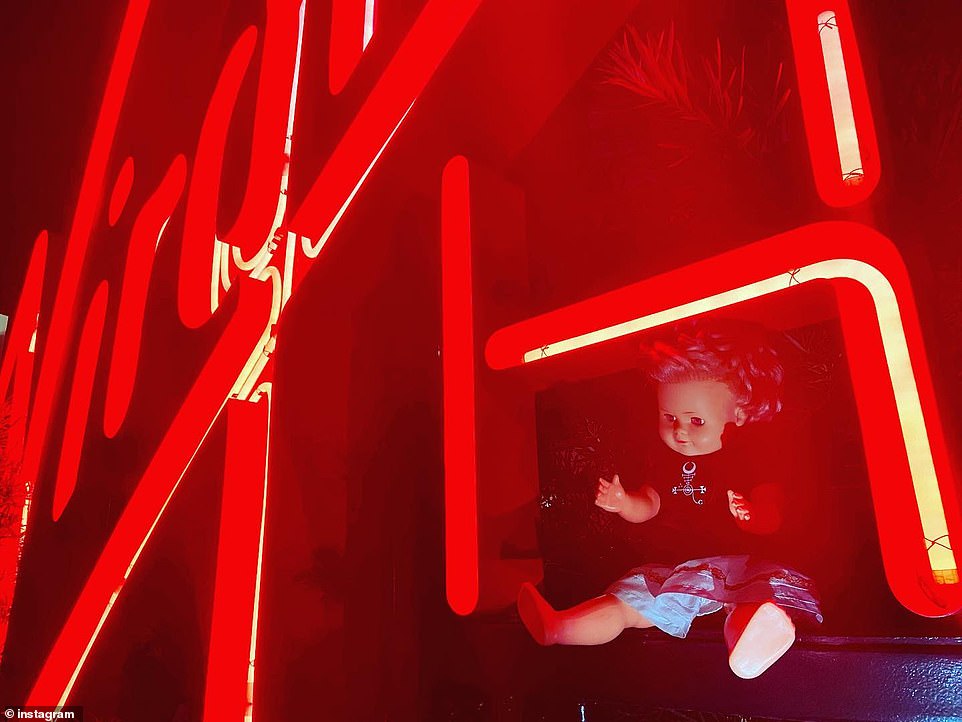 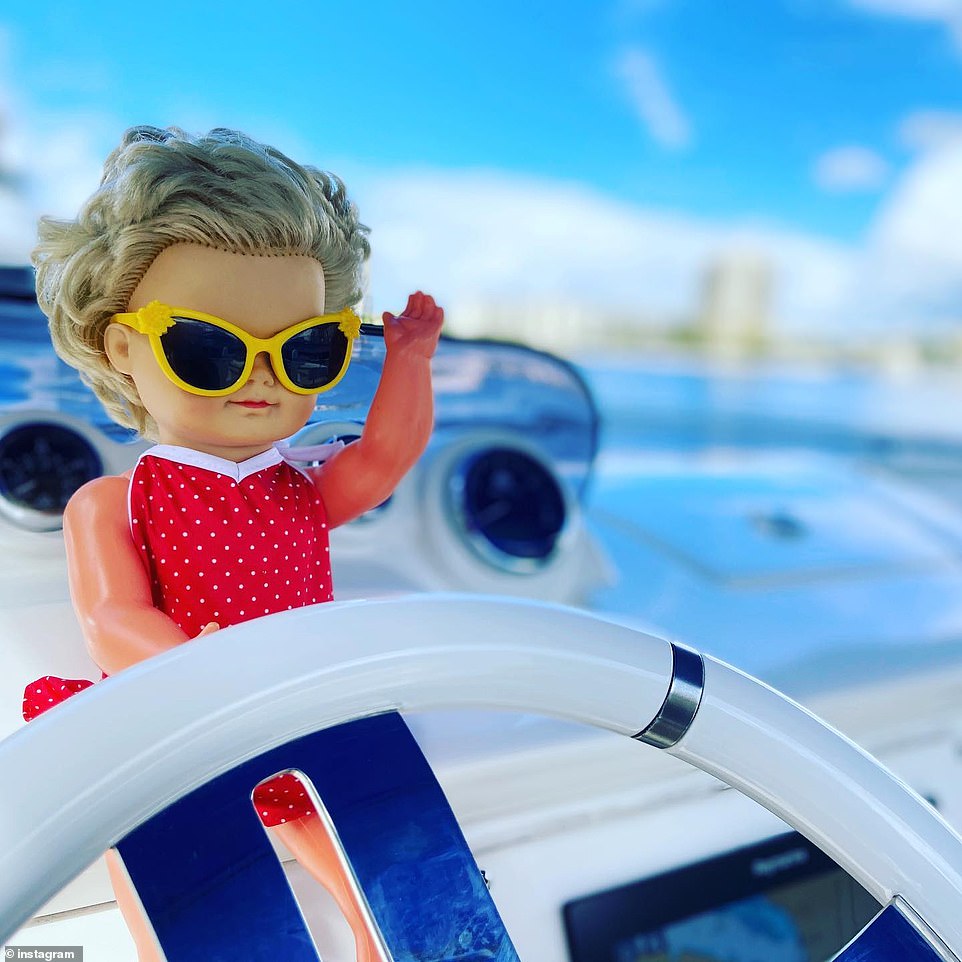 The doll takes to the water on a motorboat in Tampa, living the high life with her owner 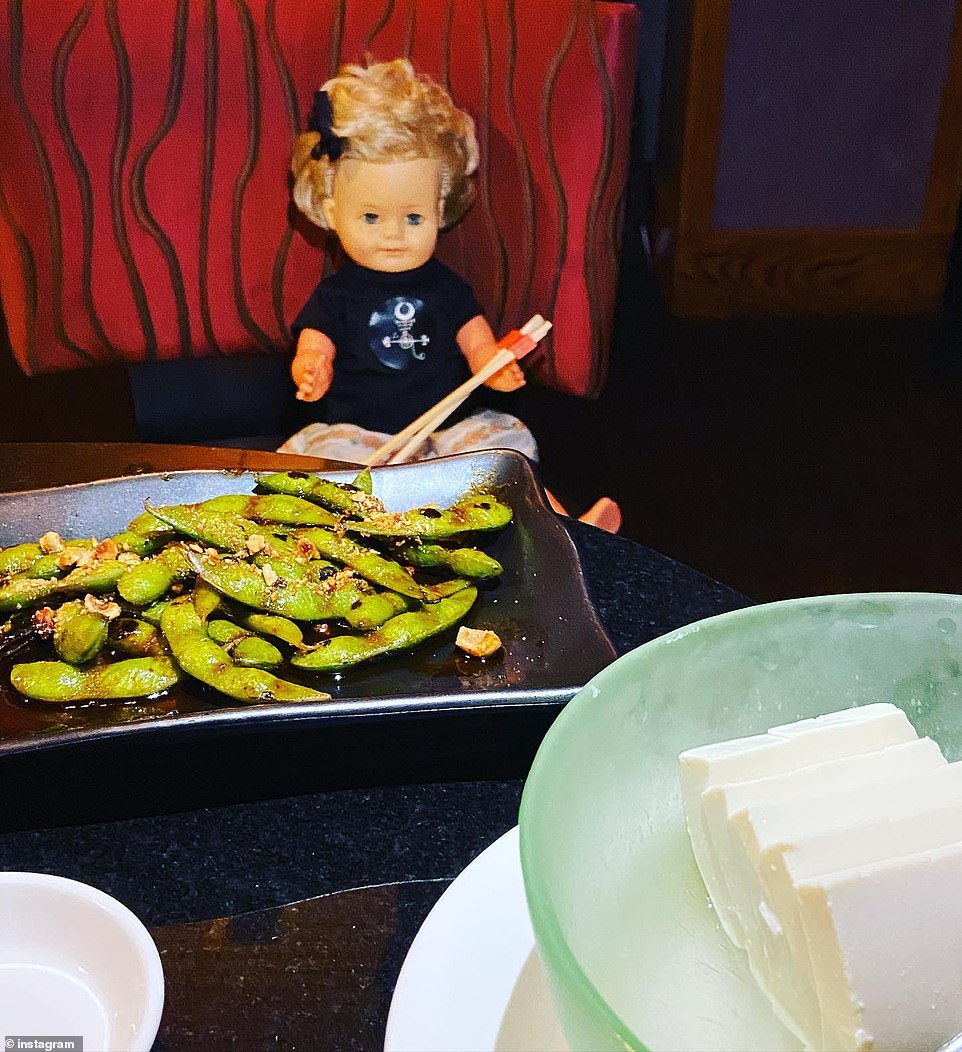 Susan has expensive tastes! The doll is seen dining at Nobu, with a plate full of edamame beans 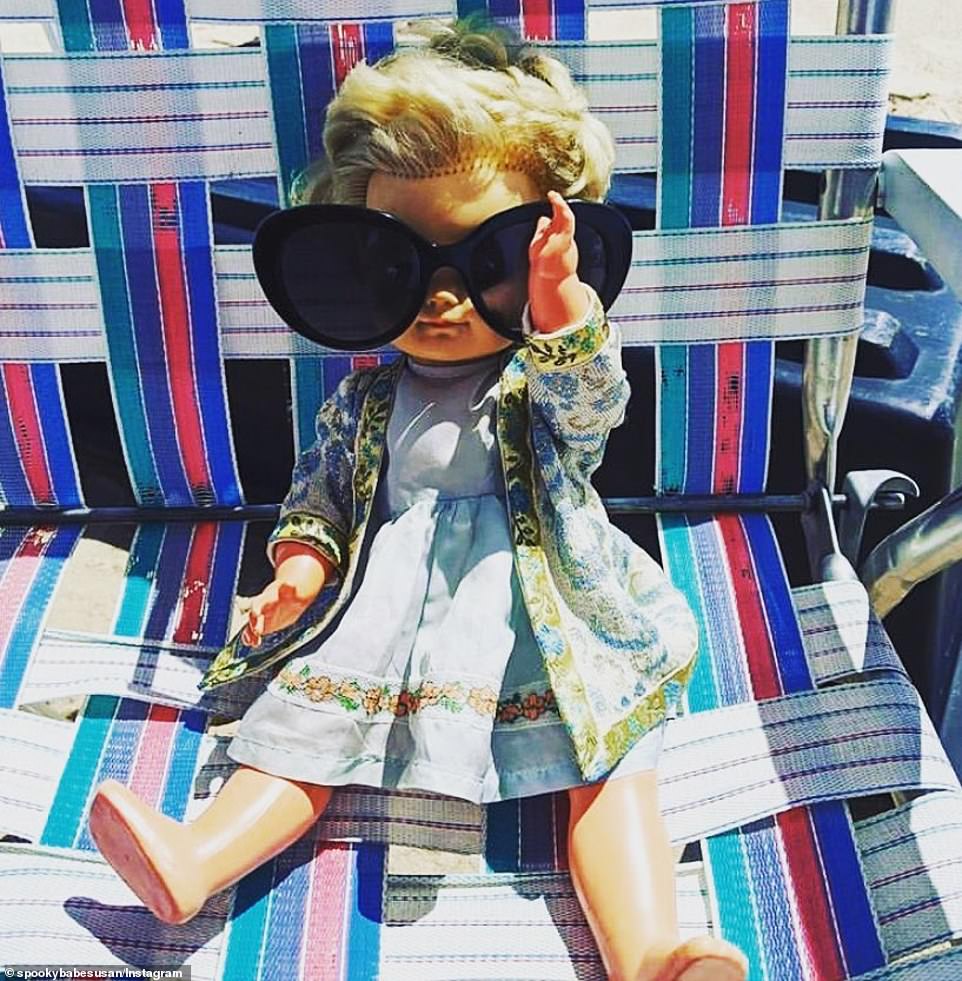 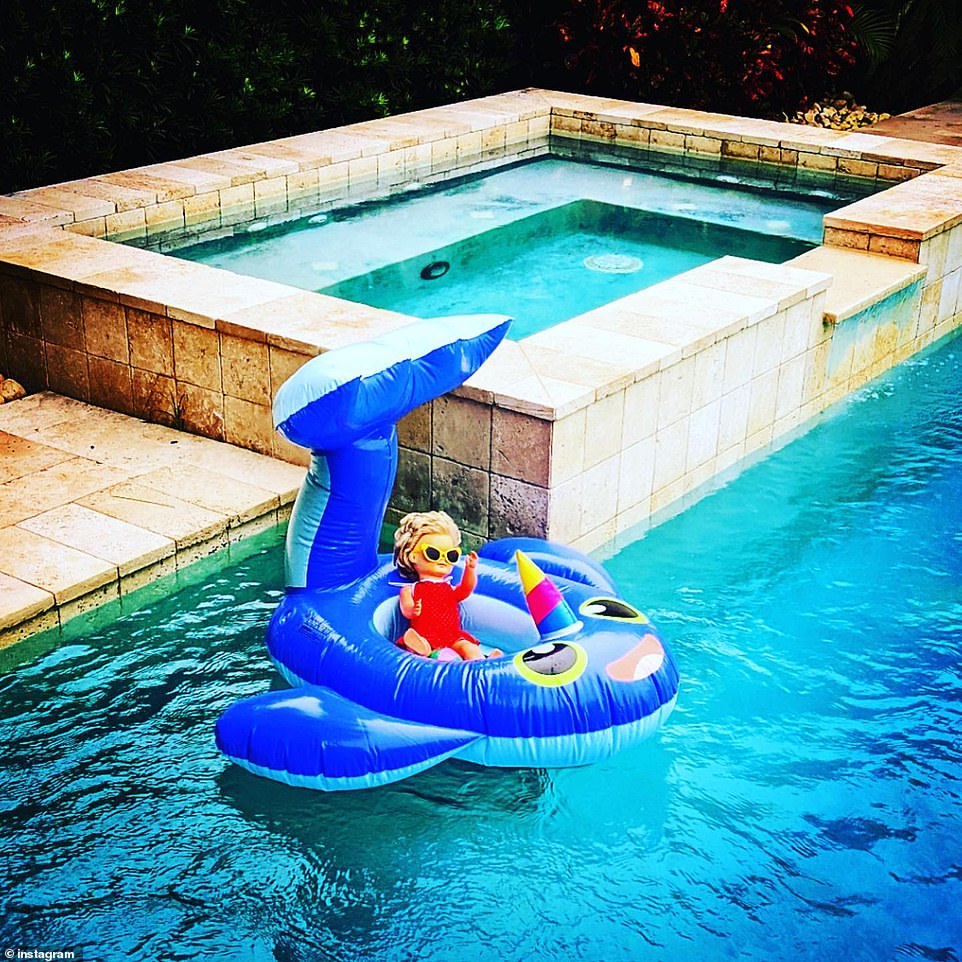 Daniels posted a photo of her doll reclining in a swimming pool, in one of the last photos she posted. The account has been dormant since September 2020 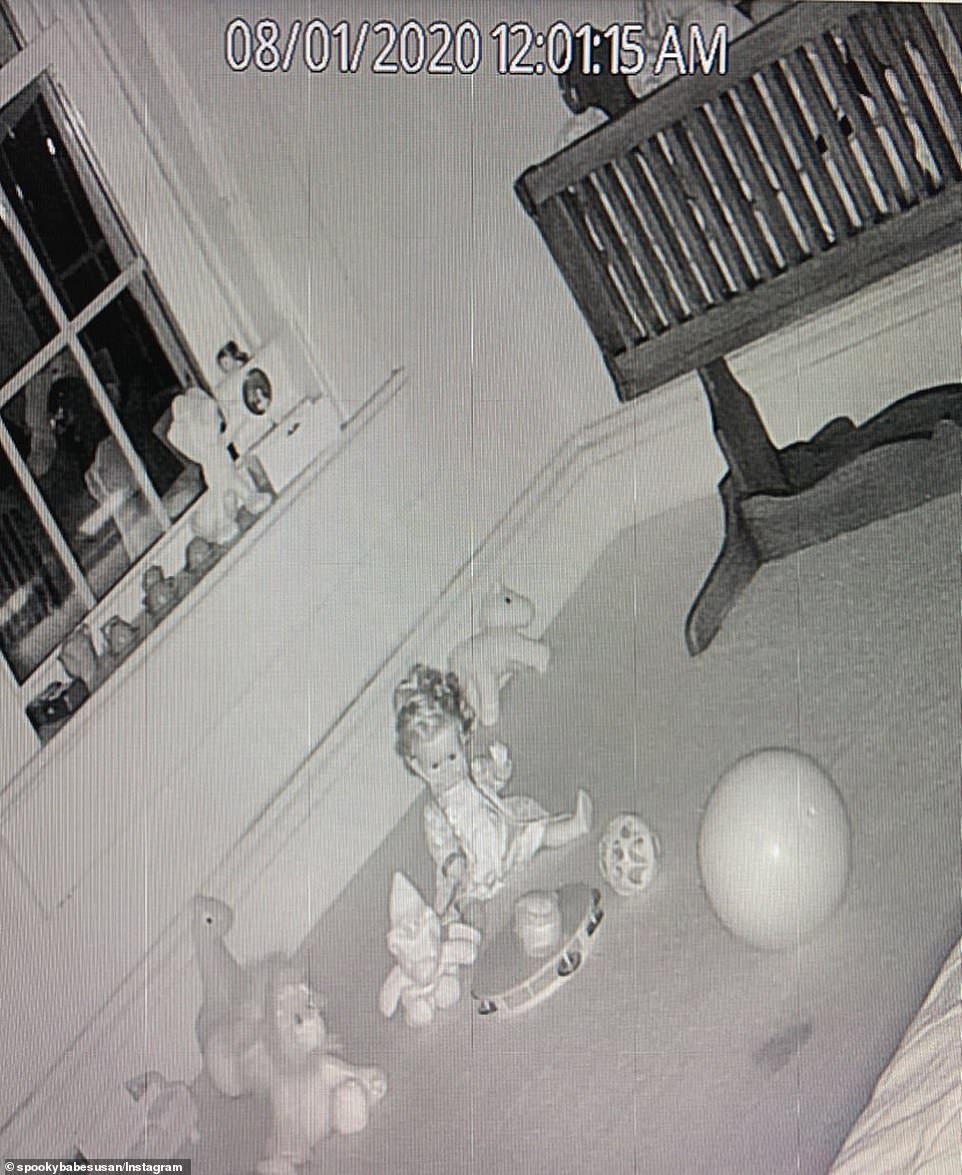 The doll is said by her owner to be haunted, having once belonged to a girl in the 1960s who died

In one photo, the doll is posing at a Virgin Hotel in Dallas.

In another, she is on a motorboat in Tampa.

The doll is pictured eating edamame at an unspecified Nobu restaurant, and floating in a pool on an inflatable whale.

Daniels, real name Stephanie Clifford, has since written a book, embarked on nationwide stripping tours, and on Thursday testified against her former lawyer Michael Avenatti, accusing him of defrauding her from the book profits.

Avenatti, who is representing himself, cross-examined Daniels on Thursday, asking about her belief in ghosts and telling the court that she claims to have ‘the ability to see and speak to dead people.’

‘You’ve also claimed that you have the ability to speak to a haunted doll named Susan?’ Avenatti said, referring to her TV program Spooky Babes.

‘Susan speaks to everyone on the show. She’s a character on ‘Spooky Babes,” Ms Daniels replied. 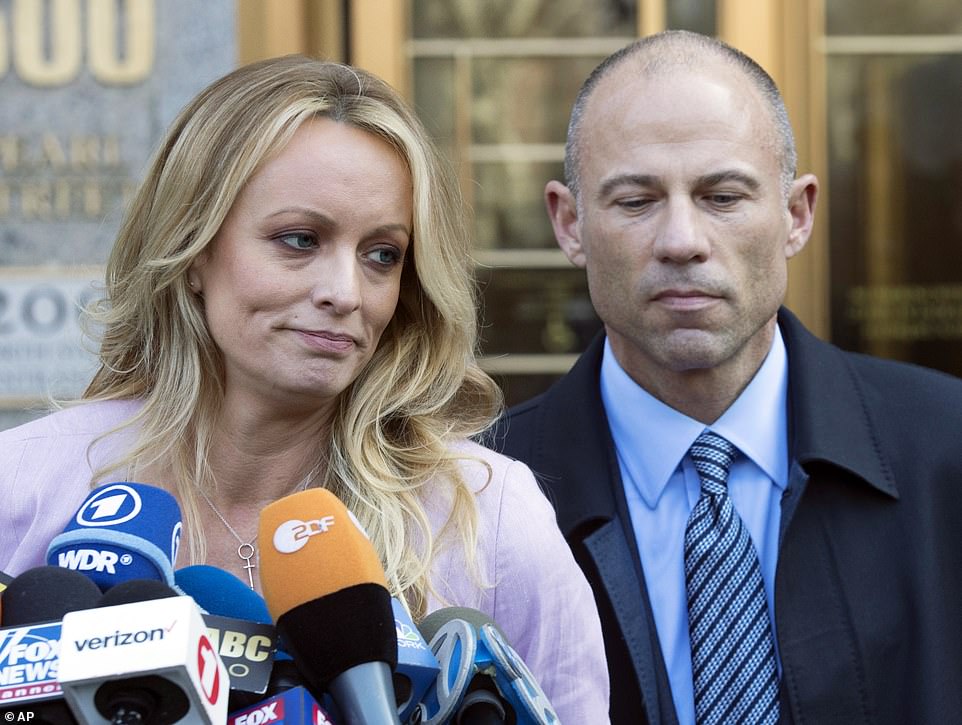 Daniels and Avenatti are pictured in April 2018, when he was representing her

Daniels alleges she and Donald Trump had sex in 2006, and that he has been trying to keep it quiet ever since. He denies ever having sex with her, but paid her $130,000 to keep quiet

Daniels is shown in the logo for her new business, Spooky Babes 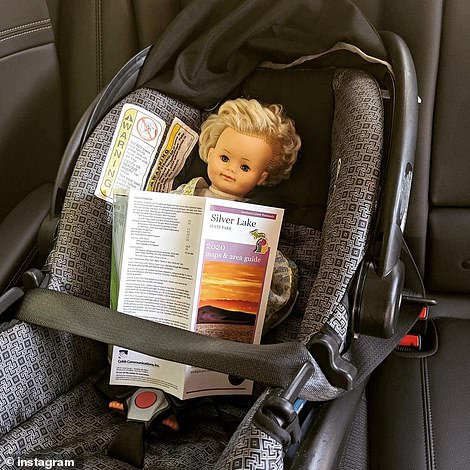 Daniels has taken Susan with her on her paranormal adventures

A local journalist in New Orleans wrote: ‘Spooky Babes is unique in that it is a full-service paranormal business; the job doesn’t end once evidence has been collected. The living may require long-term therapy.

‘ “Even if we debunk everything, someone’s been living in so much fear for so long that they’re going to have lingering issues. On our team, we have a yoga instructor, an equine therapist, and Justin is a reiki master. I’m a big proponent of alternative medicine, so we have our own CBD line called Perfect Stormy. We want to have these alternatives because it’s a long-term commitment to the client, both living and dead.” ‘

Daniels told the reporter that she and Loupe will visit a property where paranormal activity is suspected, and he will enter first.

The journalist writes: ‘She uses her skills to understand the home on a psychic level. Once she enters this state, she may blackout and take off running through the house.

‘ “They call it remote viewing. I go to a location, and I’ve never been inside before. I know what the inside looks like and where stuff is at. I black out and take off running, and Justin has to chase me.” ‘