Mr Miyagi from The Karate Kid, Professor Keating from Dead Poets Society, Dumbledore… there have been many great on-screen teachers.

Now an octopus joins their ranks, thanks to a new Netflix documentary – My Octopus Teacher.

It’s a fascinating, beautifully scored – and at times deeply moving – account of how filmmaker Craig Foster formed a bond during daily swims with an octopus living in a kelp forest off the ‘Cape of Storms’ in South Africa. And how the amazing creature went on to become, he told MailOnline Travel, his ‘ultimate teacher’ – changing how he relates to nature.

New Netflix documentary My Octopus Teacher is an extraordinary account of a never-before-seen bond between filmmaker Craig Foster and a common octopus. This picture of Craig with the octopus was taken by his son, Tom 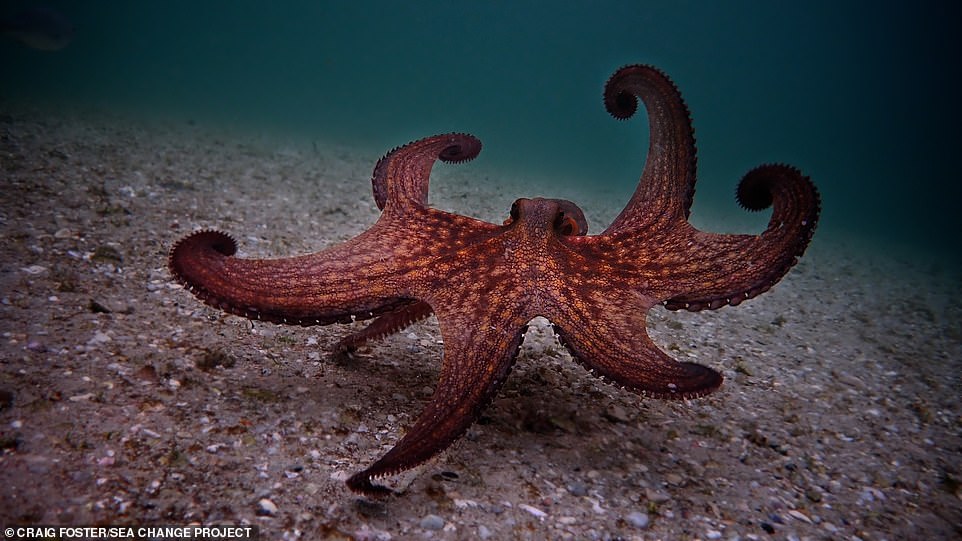 In the documentary, before the octopus’s ‘lessons’ becoming apparent, we learn that Craig, 52, began free-diving without a wetsuit in the frigid kelp forest at the tip of Africa – part of the 800-mile long Great African Sea Forest – to re-energise himself after suffering burnout. And we then join him at the beginning of his friendship journey with an animal that he discovers day by day is truly remarkable.

We’ll see the creature cunningly riding the back of a shark that’s hunting it, camouflaging itself almost magically with its surroundings – and greeting Craig with the affection of a pet dog.

We’ll also behold the common octopus showing him things that have never been recorded by science or on film. How she uses tools to defend herself against attack and ‘walks’ – bipedally, tripedaly, and quadrupedally – to navigate the seafloor. 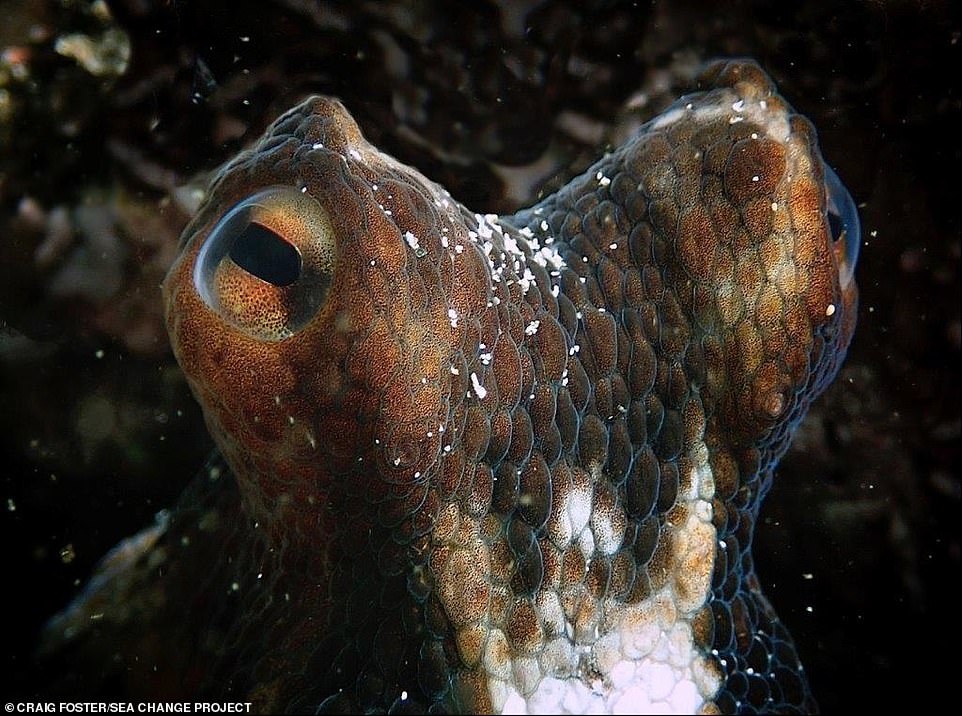 Craig first spotted the unusually curious octopus, pictured, in a calm 200-metre section of kelp forest – an ‘incredible place’ – holding on to multiple shells in a bid to protect itself from an unseen predator

She even displays what may be the first recorded case of play behavior in wild cephalopods.

He first spotted the unusually curious octopus in a calm 200-metre section of kelp forest – an ‘incredible place’ – holding on to multiple shells in a bid to protect itself from an unseen predator.

This ball of shells was such a strange sight that even nearby fish seemed bewildered by it.

Then the octopus darted away – and Craig was mesmerised.

He tracked the octopus to its den and says on the documentary – shot over a full year – that he feels there is something to learn from this creature. And then he has ‘this crazy idea’ – ‘what if I visit the octopus every day?’ 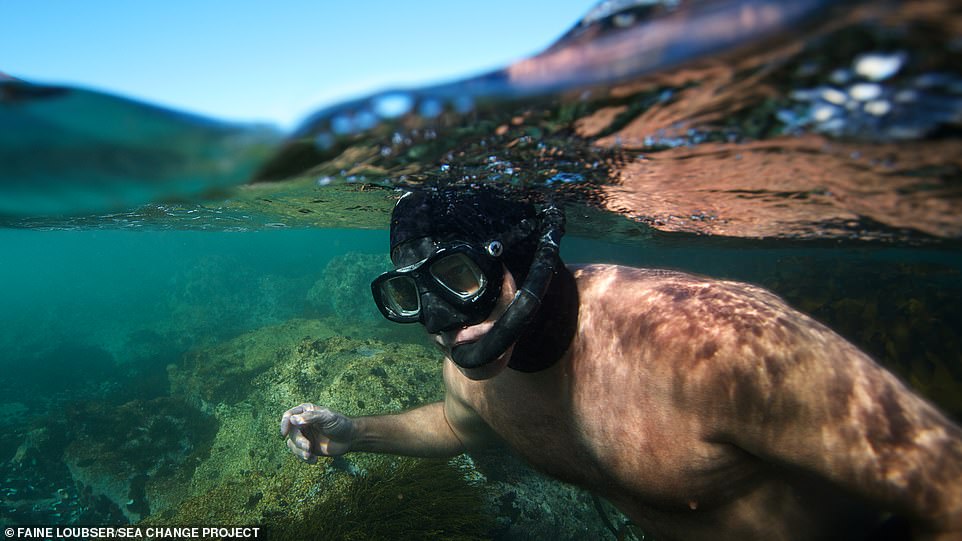 Craig, who lives in Cape Town, described to MailOnline Travel the moment when he realised that the octopus was showing signs of friendship.

He said: ‘The big moment was when she comes out and makes herself completely vulnerable to me. Then you realise that she trusts a human and she’s prepared to come out and go about her hunting and daily activity – and that’s a huge moment, because The Great African Sea Forest is just teeming with predators. These animals are very, very wary.

‘When an animal knows you as an individual, knows you just like your cat or dog knows you and then trusts you because you’ve been there so many times… it’s a huge moment that will always stay as one of my great memories.’

Craig revealed that on subsequent visits, the octopus would continue to show definite signs that she recognised him.

He said: ‘Octopuses spend most of their time in their den, because that’s the safest place. They spend 80 to 90 per cent of their time there. And then they go out on their forays. 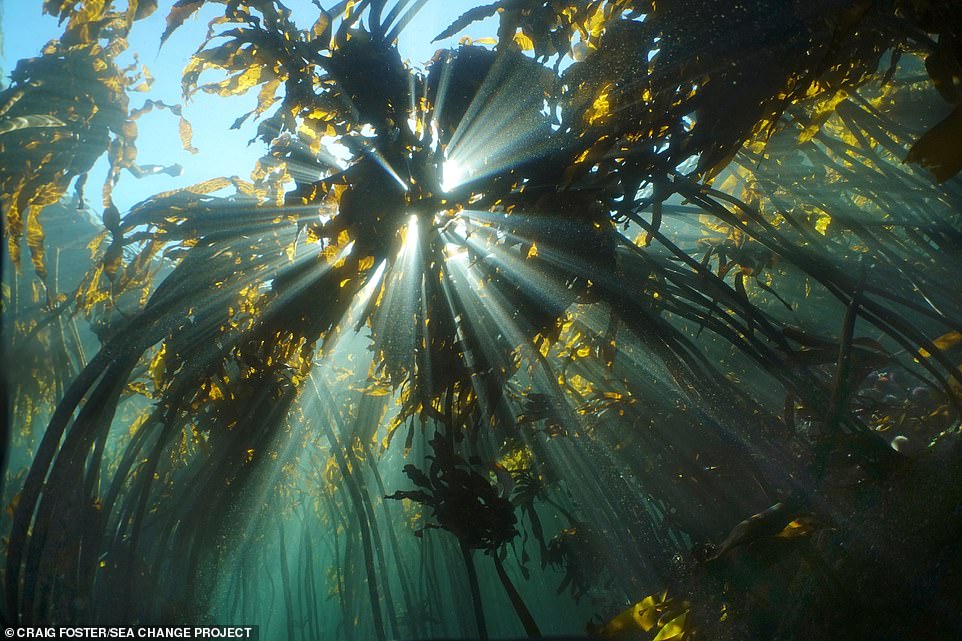 In My Octopus Teacher we learn that Craig, 52, began free-diving without a wetsuit in the frigid kelp forest at the tip of Africa (pictured) – part of the 800-mile long Great African Sea Forest – to re-energise himself after suffering burnout

‘What happens with octopuses is that when you come near them, they shrink back, but she was doing exactly the opposite.

‘She would come out and her eyes would sort of come forward. And then she’d often reach out to make contact.

‘They have a whole body language and a skin language – you can tell how they’re feeling.

‘She would have a normal colour and she would just come out and approach me. It was very, very clear.’ 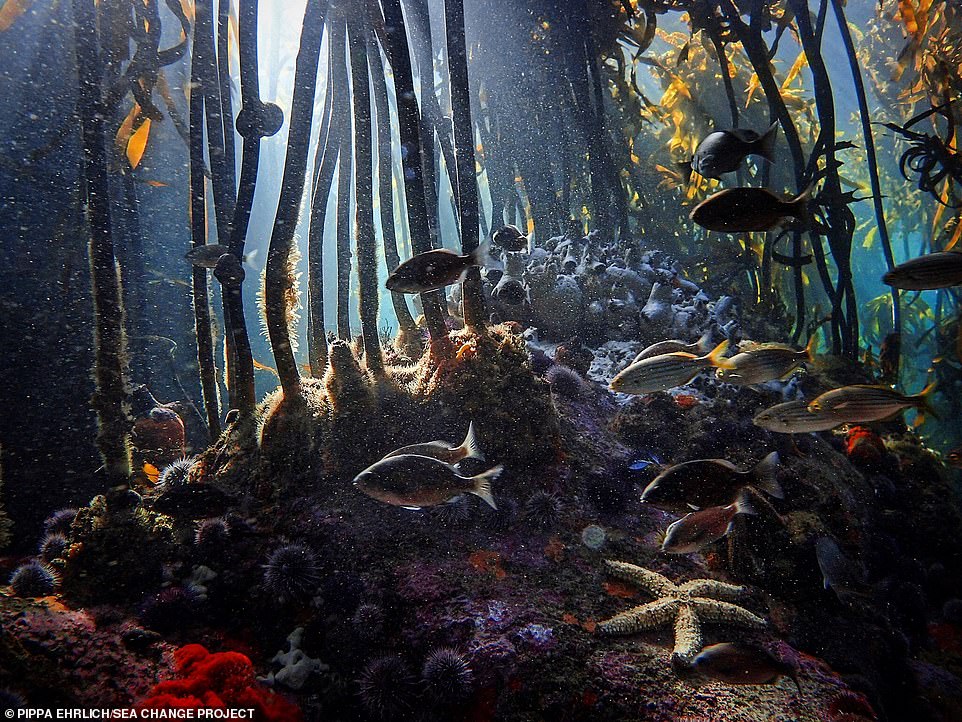 The father-of-one found that his daily swims rebooted his desire to film and take photographs again, but revealed that he never intended to make a film about The Great African Sea Forest – ‘no one is going to commission a film about a kelp forest’, he said.

However, then along came the encounter with the octopus, which proved to be irresistibly powerful.

He continued: ‘I decided to dive every day, not only to know her but to know the environment, to immerse myself in it and teach myself [underwater] tracking to the highest level I possibly could.

‘There wasn’t an initial intention to make a film at all. Filming was part of my learning process. I would go home every day and watch the material and draw maps – the camera was used as a tool to understand the environment and to really embed myself in this wild place.

‘And then only much later when extraordinary things started to unfold [did the documentary take shape]… and you must realise that when you’re going in every day, I’m seeing many other species as well and having incredible encounters, with otters, with extraordinary exotic fish.’ 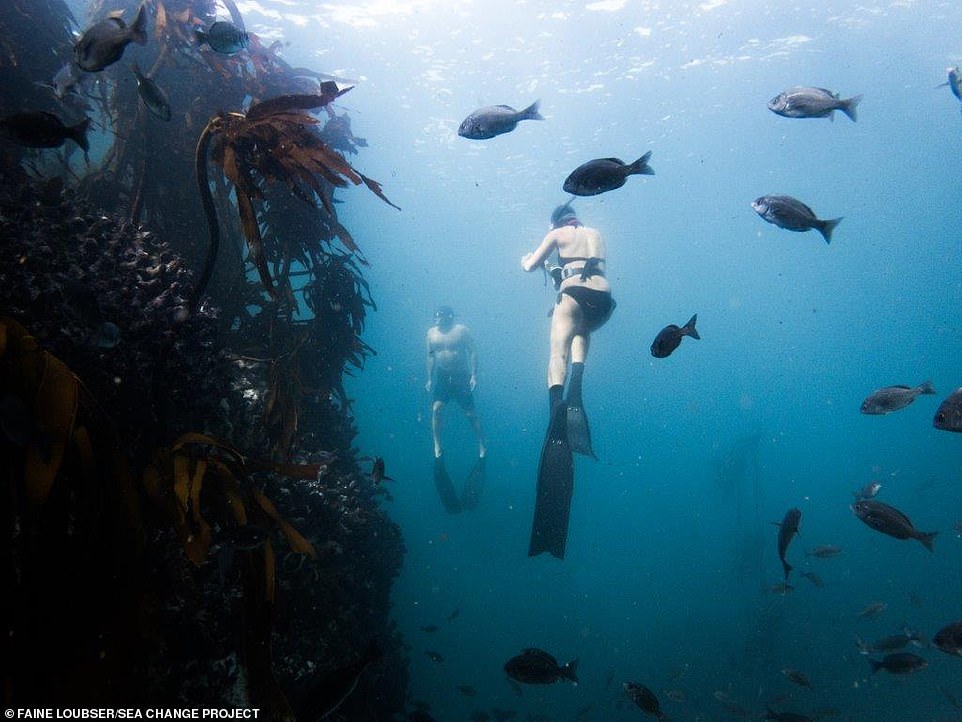 The kelp forest is home to many types of shark, including great whites, but Craig, pictured here during filming, said that the drive to the coast is a bigger danger than apex marine predators 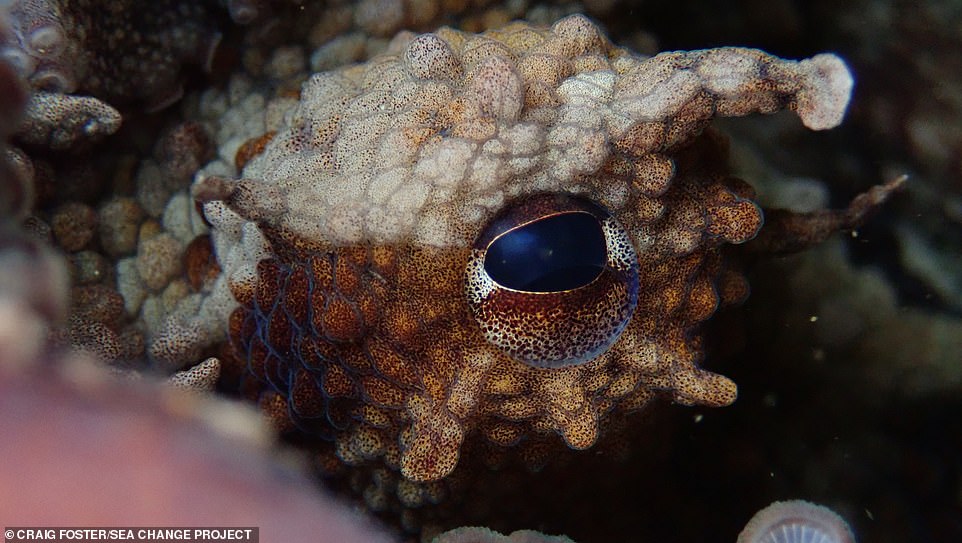 Mistress of disguise: The octopus displays incredible shape-shifting abilities – her skin able to blend into any environment and even produce little horns 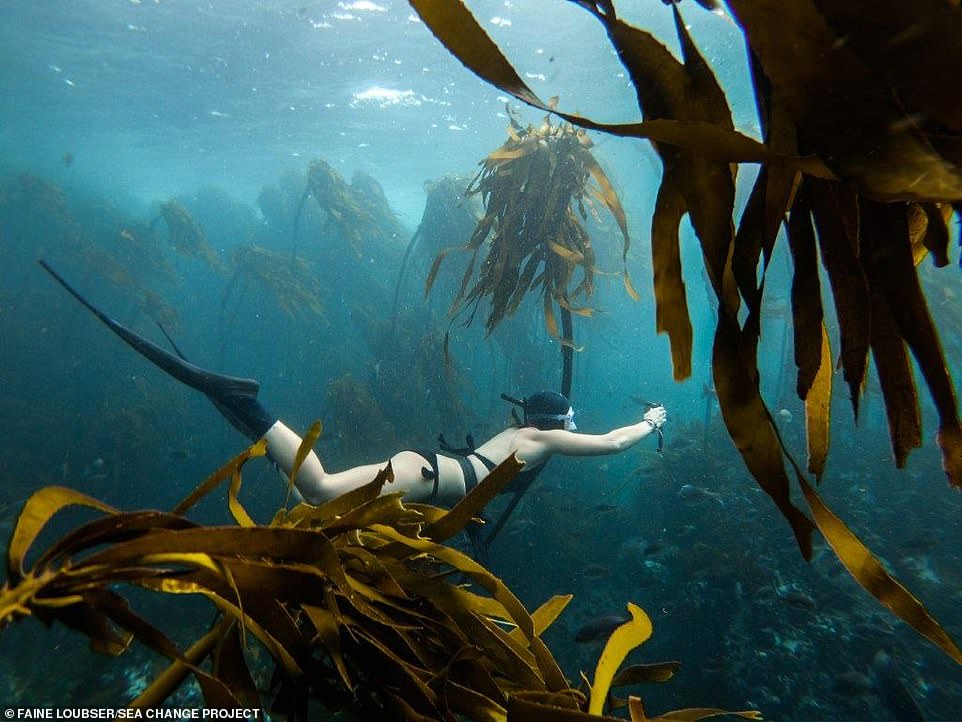 Mollusk mentor: Craig explained that he didn’t name the octopus as he didn’t want her to become a curiosity or a pet – that she stood as a ‘real teacher’. This is a behind-the-scenes image, taken in the kelp forest

Was Craig worried about getting up close and personal with powerful predators during his swims, such as great white sharks?

I have dived on a number of occasions with white sharks. I’ve dived with five white sharks in open water and none of them threatened me at all

‘But what is a real danger is the Cape of Storms [also known as the Cape of Good Hope] – it’s one of the wildest most powerful ocean areas on our planet.

‘The danger you come up against, in fact, is diving through caves repeatedly, enormous waves crashing over rocks… if you hit your head and get knocked unconscious, that’s it. That’s the danger – the big powerful ocean. When you’re going every day, there are days when it’s very, very rough.

‘The big predators are surprisingly wary of humans. I have dived on a number of occasions with white sharks. I’ve dived with five white sharks in open water and none of them threatened me at all.

‘They’re not overly aggressive to humans, especially if you relax. They don’t see humans as natural prey. When they scan us, humans don’t come up as a prey item. It’s a very rare and mysterious occurrence when somebody gets bitten by a shark.’ 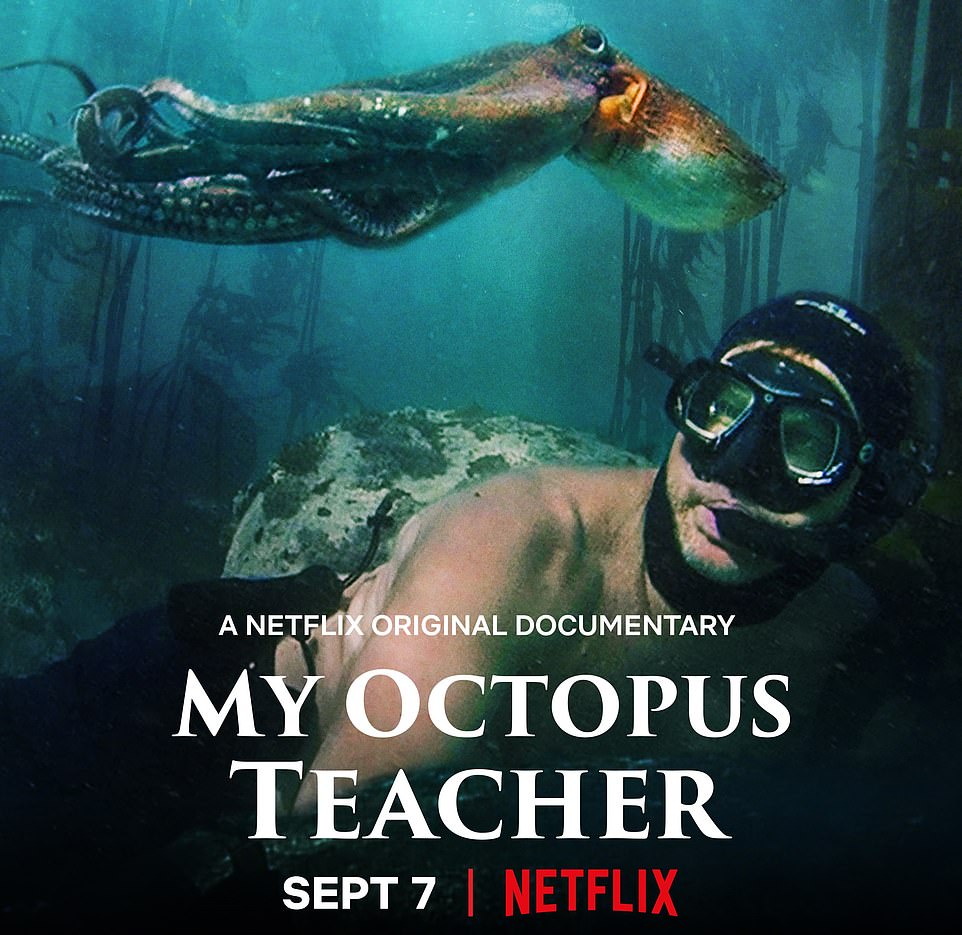 Craig said: ‘We as human beings are completely part of nature, we are designed and made wild’

MY AMAZING SWIM WITH CRAIG FOSTER IN THE KELP FOREST

Deborah Calmeyer, founder and CEO of luxury holiday firm Roar Africa, swum with Craig in the kelp forests that My Octopus Teacher was filmed in and wrote in a blog about the experience that it was a ‘big moment’.

She says: ‘My Octopus Teacher has to be seen to be believed. Southern Africa’s kelp forest [is a] wonderland of abundance and biodiversity [that’s] home to many creatures that are found nowhere else on earth.

‘About 10 months ago I had the great fortune of not only meeting Craig for his work with seachangeproject.com, but going swimming with him in these very kelp forests.

‘It was a big moment for me – not least because I opted for no wetsuit as Craig does – but because I had been following Craig’s career for 20 years prior, from when he and his brother Damon spent three years living in the central Kalahari of Botswana filming the award-winning ‘The Great Dance’, a documentary about the role of hunting in Bushmen psyche and society. And how by reading the tracks of animals, hunters were drawn into an intimate relationship with the animal they were hunting. Also revealing how in the natural world, the bushmen were completely in it, versus us who are outside of it.’

After dozens of encounters with the unnamed octopus, the teacher-student relationship crystalised.

Craig said: ‘What was incredible was to realise “oh my goodness, this animal is the ultimate teacher for me”.

‘I didn’t name her because I didn’t want to make her into a curiosity or a pet. She stands as a real teacher and I’m proud of her.

‘And she allowed me to put my miniature octopus camera inside her den and we then discovered a number of new species, crustaceans, living inside her den.

‘Then she taught me how she moves in the water in a way that doesn’t disturb other animals. Very smooth. Moving in a way that you don’t create pressure waves. That allows you to get close to other animals and not disturb them. In her case – avoid animals.’

And what does Craig hope viewers will learn from the documentary?

He said: ‘Mostly, what I hope the viewers will get out of it… she taught me that we are inseparable from nature.

‘We as human beings are completely part of nature, we are designed and made wild.

‘We are still, just underneath our skin, completely connected to the wild environment. And we are totally reliant on the natural system for every single breath we take, for every mouthful of food we put in our stomachs.

‘We are woven of the same thread. We’re made of the same stuff. If the natural system suffers, we suffer.

‘So it’s absolutely critical that if we want to stay on the planet as a species, that we get together and figure out how to regenerate that wild system that’s keeping us alive every second.’

The trailer for the documentary, which won Best Feature at the 2020 EarthxFilm Festival, can be seen here www.netflix.com/za/title/81045007.

The film is a collaboration between the Sea Change Project, Off the Fence Productions based in the Netherlands and Netflix. To learn more about the work of the Sea Change Project – ‘a community of scientists, storytellers, journalists and filmmakers who are dedicated to the ocean’ – visit stories.seachangeproject.com/my-octopus-teacher.

To buy Craig Foster’s book, Sea Change, which showcases his work and reveals the art of underwater tracking, visit seachangeproject.com/buy-book/.