A long-necked dinosaur with jagged teeth and a long tail roamed Zimbabwe 230 million years ago, new fossil analysis has revealed.

The dinosaur, dubbed Mbiresaurus raathi, was around six feet long and weighed anywhere from 20-65lbs, and is the oldest dinosaur found in Africa yet.

‘The discovery of Mbiresaurus raathi fills in a critical geographic gap in the fossil record of the oldest dinosaurs and shows the power of hypothesis-driven fieldwork for testing predictions about the ancient past,’ said Dr Christopher Griffin, from the Virginia Tech College of Science.

‘These are Africa’s oldest-known definitive dinosaurs, roughly equivalent in age to the oldest dinosaurs found anywhere in the world.

‘The oldest known dinosaurs — from roughly 230 million years ago, the Carnian Stage of the Late Triassic period — are extremely rare and have been recovered from only a few places worldwide, mainly northern Argentina, southern Brazil, and India.’

The skeleton of Mbiresaurus raathi was found in northern Zimbabwe, with just parts of its hand and portions of its skull missing.

Dr Sterling Nesbitt, an author of the study, said: ‘Early dinosaurs like Mbiresaurus raathi show that the early evolution of dinosaurs is still being written with each new find and the rise of dinosaurs was far more complicated than previously predicted.’

An analysis of its fossilised remains indicates that Mbiresaurus stood on two legs and had a relatively small head, with small, serrated, triangular teeth.

This suggests it was likely a herbivore or an omnivore, according to Dr Griffin.

‘We never expected to find such a complete and well-preserved dinosaur skeleton,’ said Dr Griffin.

‘When I found the femur of Mbiresaurus, I immediately recognized it as belonging to a dinosaur and I knew I was holding the oldest dinosaur ever found in Africa.

‘When I kept digging and found the left hip bone right next to the left thigh bone, I had to stop and take a breath — I knew that a lot of the skeleton was probably there, still articulated together in life position.’ 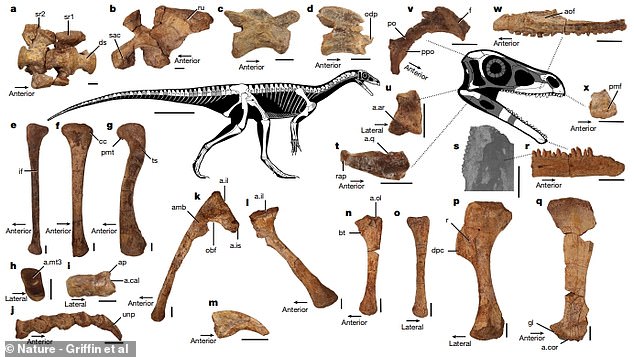 The skeleton of Mbiresaurus raathi was found in northern Zimbabwe, with just parts of tits hand and portions of its skull missing

Alongside Mbiresaurus, the researchers found a range of other fossils, including a herrerasaurid dinosaur, early mammal relatives such as cynodonts, armored crocodylian relatives such as aetosaurs, and ‘bizarre, archaic reptiles’ known as rhynchosaurs.

They hope the findings will help to shed light on the timing and location of early dinosaur migrations.

When Earth’s continents were one – a supercontinent known as Pangea – the climate was thought to have been divided into climate belts, which influenced the distribution of animals.

Latitudinal belts were thought to have strong humid and arid climates, while higher latitudes and lower tropics were more temperate.

‘Because dinosaurs initially dispersed under this climatic pattern, the early dispersal of dinosaurs should therefore have been controlled by latitude,’ Dr Griffin explained. 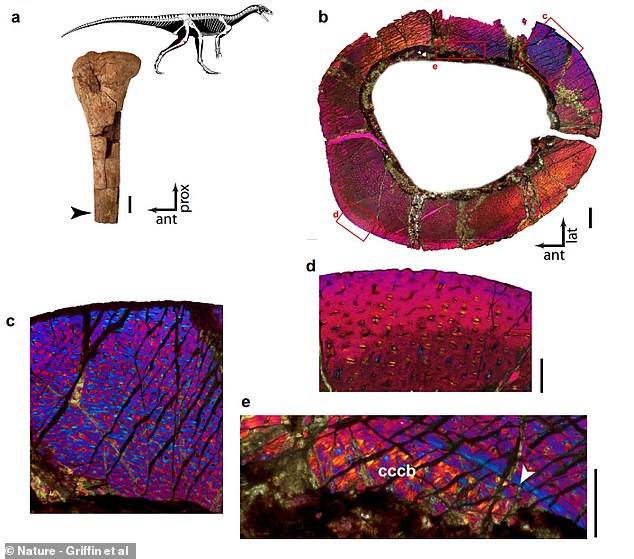 An analysis of its fossilised remains indicates that Mbiresaurus stood on two legs, and its head was relatively small, with small, serrated, triangular teeth 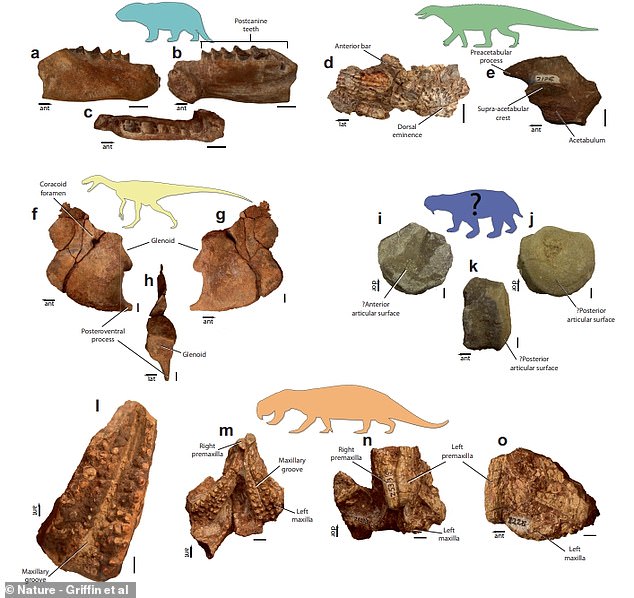 Alongside Mbiresaurus, the researchers found a range of other fossils, including a herrerasaurid dinosaur, early mammal relatives such as cynodonts, armored crocodylian relatives such as aetosaurs, and ‘bizarre, archaic reptiles’ known as rhynchosaurs

‘The oldest dinosaurs are known from roughly the same ancient latitudes along the southern temperate climate belt what was at the time, approximately 50 degrees south.’

The researchers purposefully targeted northern Zimbabwe, as it fell along this climate belt and bridged the gap between southern Brazil and India during the Late Triassic Age.

‘The discovery of the Mbiresaurus is an exciting and special find for Zimbabwe and the entire paleontological field,’ said Michel Zondo, a curator and fossil preparer at the Natural History Museum of Zimbabwe.

‘The fact that the Mbiresaurus skeleton is almost complete makes it a perfect reference material for further finds.