Averil Hart, 19, (pictured) started her first term at the University of East Anglia in September 2012

The death of a teenage university student with anorexia could have been avoided and was contributed to by neglect, an inquest has concluded.

Averil Hart, 19, who was a black belt in karate and academically gifted, started her first term at the University of East Anglia in September 2012.

She had a three-year history of anorexia and had been discharged from the eating disorder unit at Addenbrooke’s Hospital in Cambridge the previous month, following an 11-month stay.

She lost weight during her first term and was taken to hospital in Norwich by ambulance after she was found collapsed in her room on December 7.

Miss Hart was transferred to Addenbrooke’s on December 11 and died there just four days later.

Cambridgeshire assistant coroner Sean Horstead has overseen separate inquests into the deaths of five women with anorexia and said, after concluding Miss Hart’s inquest which was the last of the five hearings, that he would write to bodies including NHS England to raise a series of concerns.

Recording a narrative conclusion in the case of Miss Hart on Friday, he said: ‘Averil Hart’s death could have been avoided and… her death was contributed to by neglect.’

He recorded her medical cause of death as anorexia. 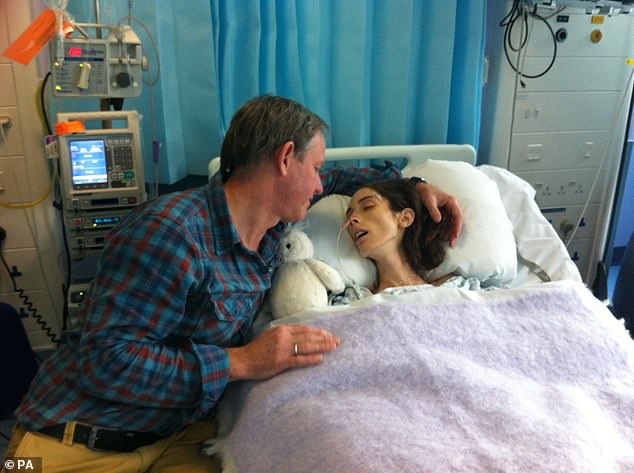 Mr Horstead said that, on the balance of probabilities, a series of failings ‘more than minimally contributed to her death’.

He said these included the lack of a commissioned service for the medical monitoring of an anorexia patient at high risk of relapse.

He said that Miss Hart was allocated to an ‘inexperienced trainee psychologist’ amid a ‘staffing crisis’ at the Norfolk Community Eating Disorder Service (NCEDS).

There was a ‘missed opportunity’ when Miss Hart’s father, Nic Hart, raised concerns about his daughter’s condition over a week before her collapse but was not spoken to directly by anyone at NCEDS, Mr Horstead said.

He said there was a failure to provide ‘any appropriate nutritional support’ to Miss Hart during her four-day stay at the Norfolk and Norwich University Hospital (NNUH).

‘In the context of her severely malnourished condition recognised on admission, this was a gross failure which had a direct causal connection with, and more than minimally contributed to, her death,’ he said.

‘Averil Hart’s death was therefore contributed to by neglect.’

The lack of weekend support from psychiatrists and dieticians at the NNUH and a failure to manage her anorexic behaviours while on the ward, where she fell and hit her head and was asked to complete her own food chart, also contributed, he said.

He said that delays during the admission process to Addenbrooke’s Hospital ‘possibly’ contributed to her death.

‘However, given the already greatly diminished chance of survival Averil faced following her period at NNUH prior to her arrival at Addenbrooke’s it can only be safely concluded that these failures possibly rather than probably more than minimally contributed to her death,’ he said.

The hearing at Peterborough Town Hall was the last of five inquests that Mr Horstead had overseen into the deaths of women with anorexia.

Mr Horstead said that the ‘absence of a formally commissioned monitoring service in primary or secondary care is the context wherein a number of these deaths have arisen’.

He said that GPs are ‘generalist by definition’ and anorexia is a ‘relatively uncommon condition for a generalist to deal with’, but that it was also ‘unreasonable’ to expect ‘hard-pressed secondary services to be entirely responsible without commissioning of a service’.

He described the current situation as ‘something of a postcode lottery’ and said he would write to NHS England with his concerns.

He said he would also write to the Royal College of Psychiatrists and the General Medical Council with concerns over education and training.

‘There’s a level of ignorance amongst medical practitioners that has yet to change,’ he said.

He said he will also write to the Office for National Statistics and the ‘appropriate office within the coronial jurisdiction’ about a lack of data on eating disorder occurrence in the UK.

‘There’s a hope that the tide can be turned,’ he said.

‘I hope the five inquests that have been heard in this jurisdiction can be the start of that in some small way.’

Miss Hart’s father Nic Hart said after the hearing: ‘We hope, now that the coroner has finally looked in detail at the evidence of the failings by each and every organisation looking after Averil, that there will be recognition of the urgent need for reform of the NHS eating disorder services not just in the east of England, but nationally, involving training and more resources.’

Leigh Day partner Emma Jones, who represents Mr Hart, said: ‘We could not have asked for any more from the coroner and we welcome his conclusion.’

Tracy Dowling, chief executive of Cambridgeshire and Peterborough NHS Foundation Trust, which provides specialist inpatient services and community services in the area as well as community services in Norfolk, said: ‘We offer sincere condolences to Averil’s family and we are very sorry for the shortcomings in her care.

‘We have acted on the learnings from this tragedy and we continue to do so to advance the understanding and treatment of eating disorders, and together with our partners we are working more closely than ever on the provision of care for patients.

‘We are committed to supporting further developments regionally and nationally which will ensure patients can access support at the earliest opportunity, and therefore have the best chances of recovery.’