You’d better be quick! McDonald’s slashes the price of bargain Triple Cheeseburger to just 99p for ONE day only

McDonald’s is set to delight customers by offering its Triple Cheeseburger for a bargain 99p for one day only.

Fast food fans who have the My McDonald’s App will be able to purchase the tasty burger for less than £1 to kick off March on Monday, as part of its ‘McDonald’s Monday’ calendar of deals.

The 99p Triple Cheeseburger, which is normally priced at £2.19, is exclusively available using the fast food chain’s app for new and existing customers.

The popular burger consists of three patties topped with slices of melted cheese, pickles, onions, ketchup and mustard, all jam-packed between a soft, toasted bun.

McDonald’s has delighted customers by offering its Triple Cheeseburgers (pictured) for 99p for one day only, from 11am on March 1, as part of its ‘McDonald’s Monday’ deals

The offer will be available from 11am via the app or through the restaurant’s reopened walk-in takeaway service.

The unmissable deal is available for one day only but dedicated customers can keep track of McDonald’s new Monday deals each week using the My McDonald’s App.

Fans were rejoicing back in August when Triple Cheeseburger was added to McDonald’s permanent menu, alongside the Double Quarter Pounder.

McDonald’s also announced the return of its Grand Big Mac earlier this month, which is now available in restaurants around the UK. 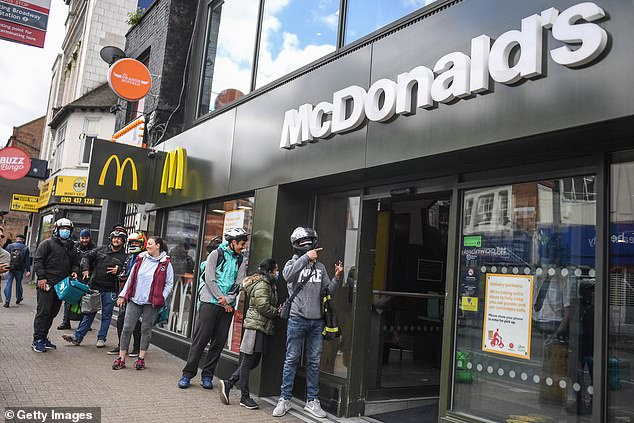 The 99p Triple Cheeseburger, which normally costs £2.19, is exclusively available on the My McDonald’s app for new and existing customers (pictured, McDonald’s in Tooting, London)

A plethora of new and returning items will be available until March 23, via partner delivery services or drive-thrus.

Also available is the Homestyle Crispy Chicken, the only new item on the menu, while Mozzarella Dippers made a return, along with the Flake McFlurry and the Flake Raspberry McFlurry.

Diners are also be able to get their orders delivered free from Just Eat, with the promotion running until 31st March, for a minimum spend of £5.

The 731-calorie Grand Big Mac has the same ingredients as a regular Big Mac – two beef patties, and a special sauce with lettuce, cheese, pickles, and onions sandwiched between a three sesame seed buns – but the patties and buns are bigger in size.

By comparison, a regular Big Mac has 508 calories. The new burger will cost £6.09 for a medium-sized meal deal.

Three other treats are making a return, with the savoury Mozarella Dippers being added back to the menu, costing £1.89 for a box of three, or £5.09 for nine dippers.

Dessert-wise, the McFlurry Flake and McFlurry Raspberry Flake are also making a comeback, both costing 99p for mini size and £1.39 for a regular size.