A man who has eaten a burger every other day for over two decades, has spent thousands on his McDonald’s obsession.

David Geyer, 32, from Bergheim, Germany, has been addicted to the fast-food restaurant since his first visit in 1997.

From trainers, clothes to socks, David has spent €5,000 on McDonald’s merchandise and a staggering €40,000 on food over the years, eating up to 12 fast food meals a week at the height of his obsession.

The gardener who even has a tattoo of a juicy burger and fries on his leg, has filled his home with memorabilia including a makeshift McDonald’s sign and a menu on his living room wall.

David Geyer, 32, (pictured) from Bergheim, Germany, has been addicted to McDonald’s since he first visited the restaurant in 1997 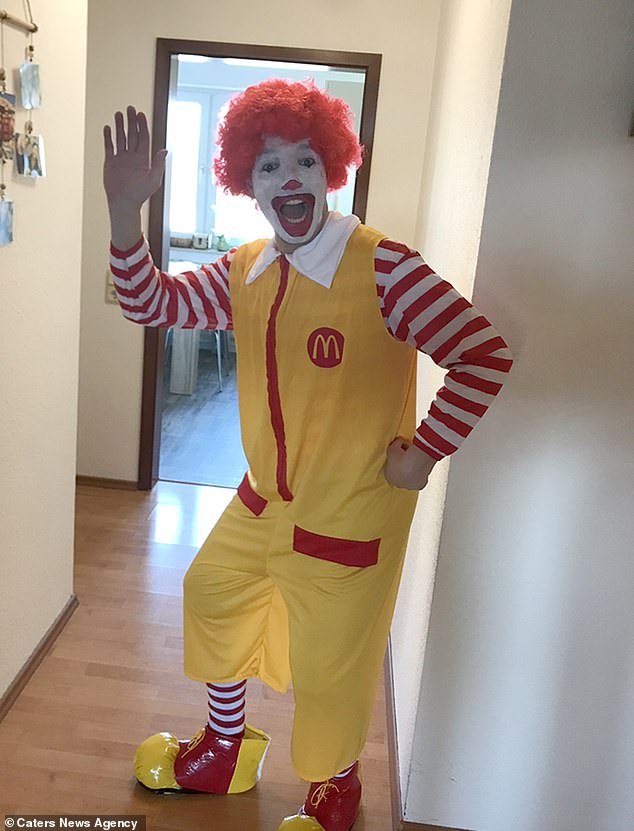 David revealed he’s eaten a burger from the fast-food chain every other day for over two decades. Pictured: David dressed up as Ronald McDonald 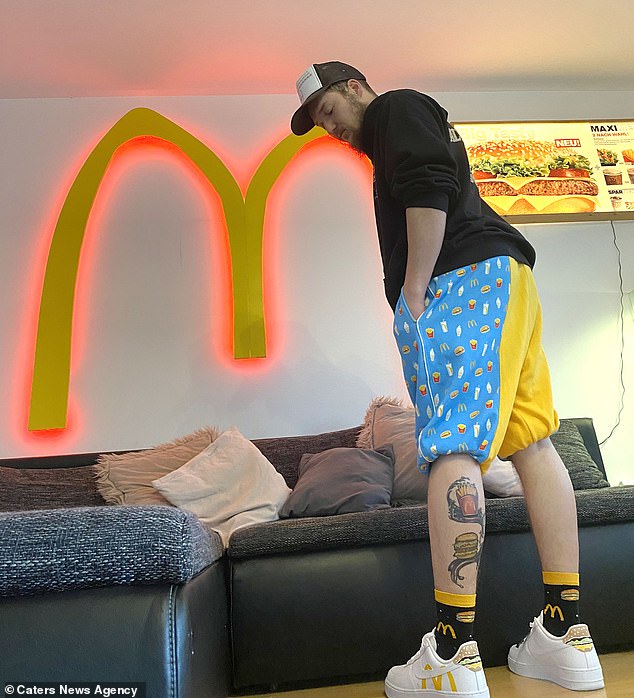 David (pictured) who has spent over 5,000 euros on McDonald’s merchandise, got a tattoo of a burger and fries last July

David said: ‘McDonald’s has been a huge part of my life for so many years.

‘It felt right to get a tattoo last July as the fast-food chain has become apart of my identity.

‘I never order the same meal over and over again because then it would get boring.

‘But a Big Tasty Bacon meal with fries is to die for. It is my favourite.’

David who has eaten over 4,360 burgers, has no complaints about the menu but tends to avoid the ‘Filet O fish’ and vegan options.

He said: ‘I am always hungry for a McDonalds and often can’t refuse a burger when I drive past.

‘People may think I am absolutely crazy. 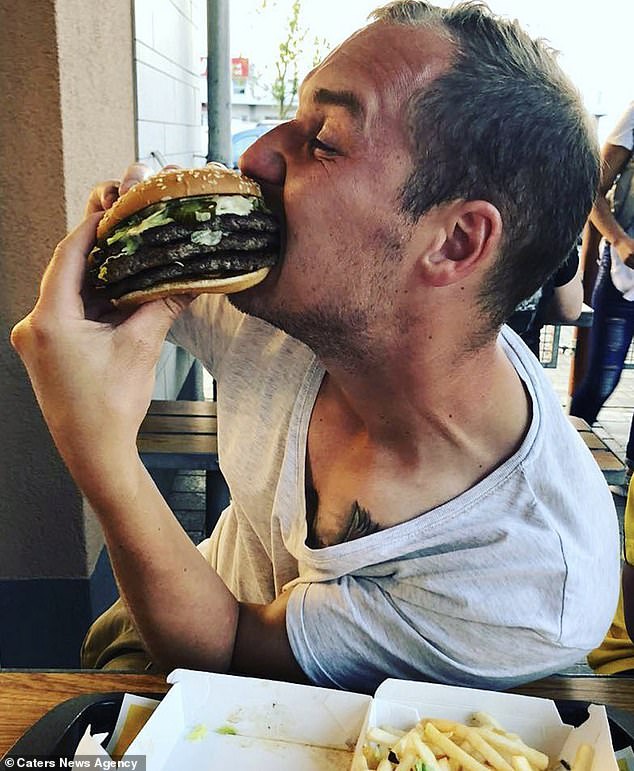 David revealed he doesn’t order the same meal repeatedly to avoid getting bored of the menu. Pictured: David eating a triple beef burger 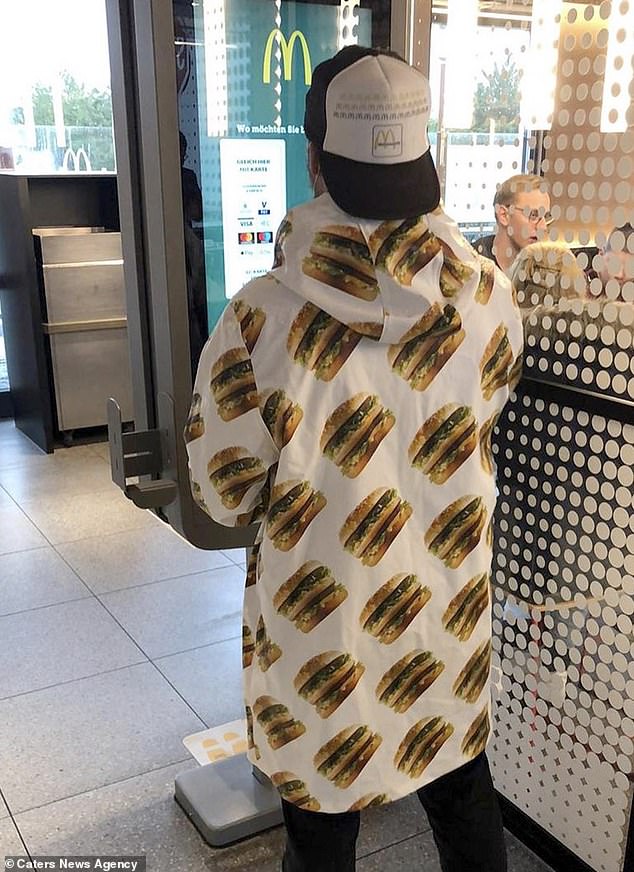 David (pictured) who has eaten over 4,360 burgers, prefers not to eat the Filet O fish’ and vegan options 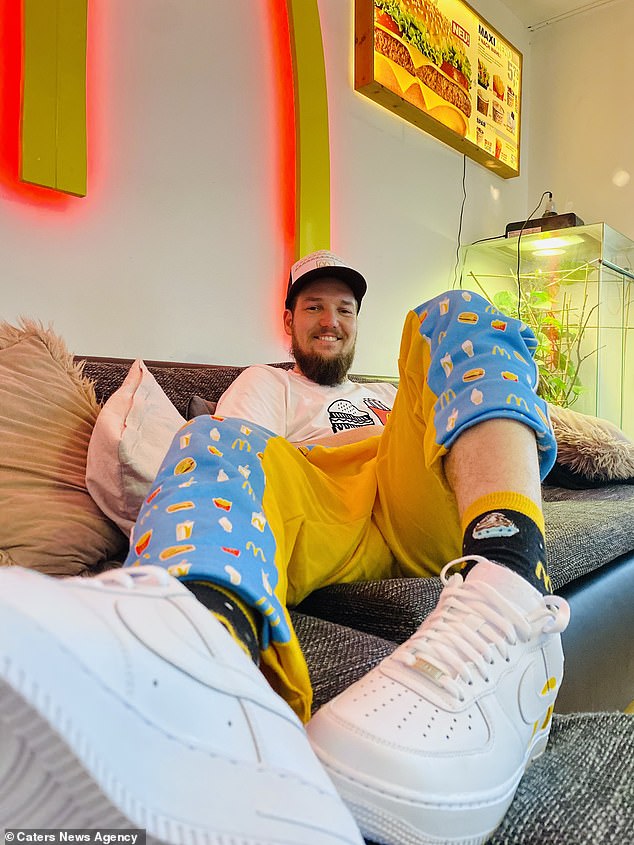 David (pictured) said he knew McDonald’s would always be apart of his life, gushing about the people and employees who’ve helped to make special memories

‘But it’s not just about the food; it is about the people, the employees and the memories made in a McDonalds that make it special.

‘I will always remember my first visit during the spring of 1997.

‘It was an amazing treat and I knew Mcdonald’s was going to be apart of my life forever.’

David recalls spending more time in McDonald’s than home, when he landed his first job in 2005.

He said: ‘My real fascination began when I started making my own money.

‘I sat more in McDonald’s Restaurant than at my mother’s dining room table. 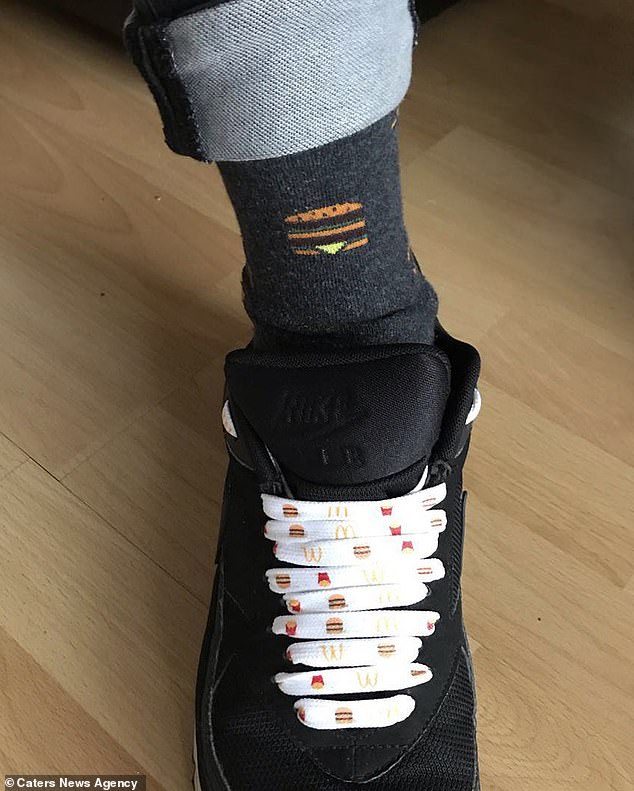 David said he would spend more time in McDonald’s than at home, when he landed his first job in 2005. Pictured: David’s merchandise

‘At one point, I was eating a Maccies eight to 12 times per week.’

David has a cabinet dedicated to McDonald’s merchandise ranging from Coca Cola glasses to trainers and bags.

He said: ‘I am an easy person to buy for at Christmas as I love anything McDonald’s related.

‘I have received a makeshift McDonalds logo sign which is on my living room wall.

‘It is next to a photo of the menu which I purchased on eBay. 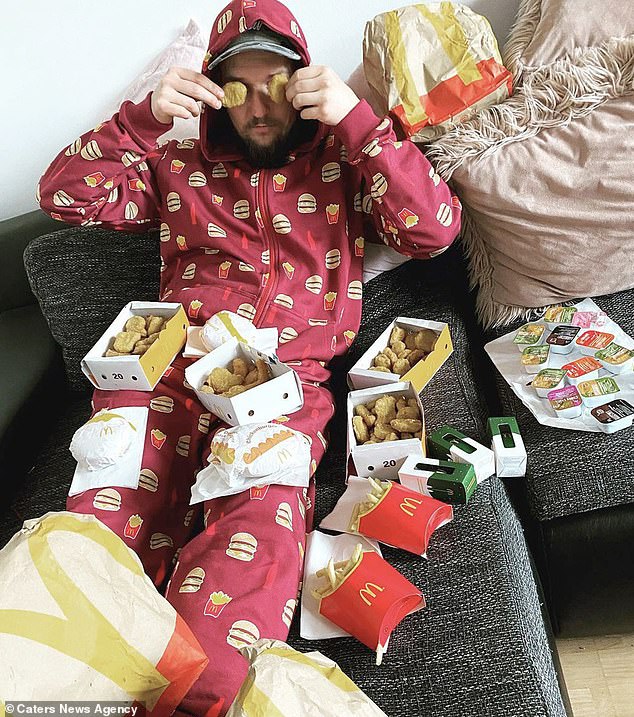 ‘I have a few pairs of Nike trainers which have been personalised and McDonald’s laces to match.

‘It is hard to put a number on how much money I have spent on food. 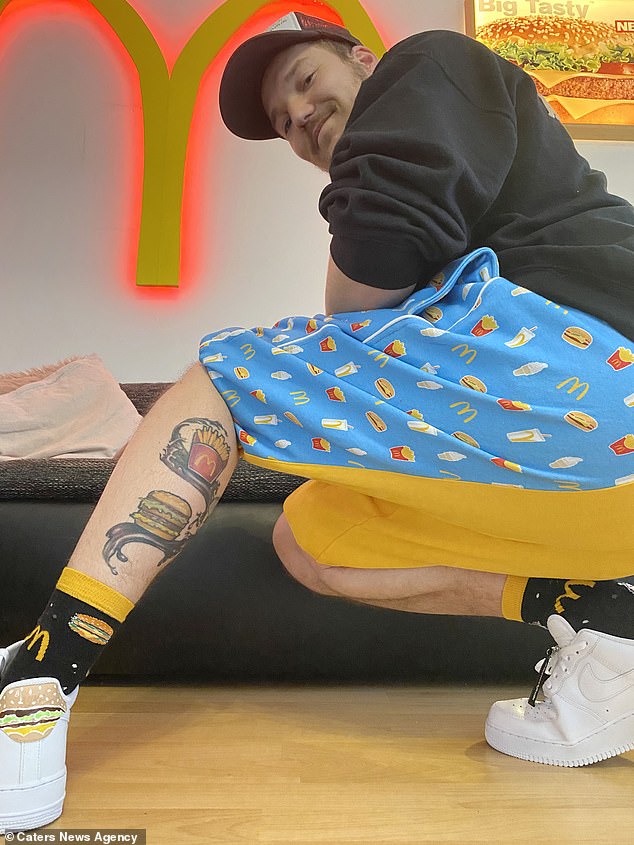