Beleaguered McColl’s has warned a rescue deal with its lenders could completely wipe out shareholders.

The convenience store chain, which operates 1,100 sites and employs 16,000 staff, has been teetering on the brink of collapse for weeks.

The company is negotiating with lenders over a £97million debt pile it cannot afford to service and said even a successful outcome would result in ordinary shares holding ‘little or no value’.

Beleaguered convenience store chain McColl’s, which operates 1,100 sites and employs 16,000 staff, has been teetering on the brink of collapse for weeks

The dire update came alongside a warning that ‘softer’ sales over Easter meant profits last year would be no better than the £20million it made in the previous 12 months.

McColl’s was hit by shoppers reducing their spending and said supply chain chaos, which has left it with gaps on shelves since last year, was still causing shortages.

It said it is working with its sole supplier, Morrisons, to overcome the problems. The company also said its results for 2021 would be delayed.

The latest crash means McColl’s, which joined the London Stock Exchange in 2014 with a value of £200million, has lost 95 per cent of its value in the past year.

The business has reportedly called in advisers to seek a buyer or investor willing to pump enough cash into the business to avoid going into administration.

The Issa family, which owns Asda and the EG petrol forecourt group, made a takeover approach for the chain but pulled out.

And Morrisons, which has been supporting the chain with longer payment terms, has been tipped as a potential buyer for part or all of the business. 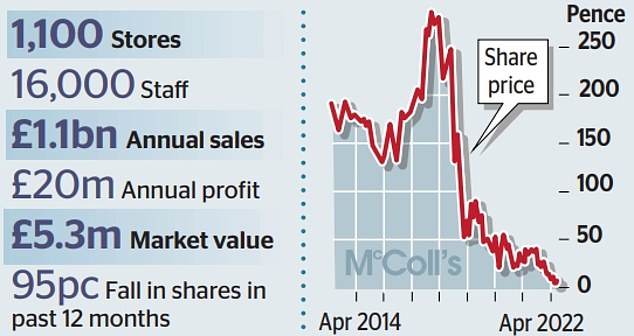 McColl’s was hit by shoppers reducing their spending and said supply chain chaos, which has left it with gaps on shelves since last year, was still causing shortages

McColl’s flagged a strong performance in the 254 stores it has converted into Morrisons Daily sites, saying growth was at least 20 per cent above that of the stores in its own name.

It has an agreement with the supermarket to take the number of conversions to 450 by December, and has converted 69 since December last year. 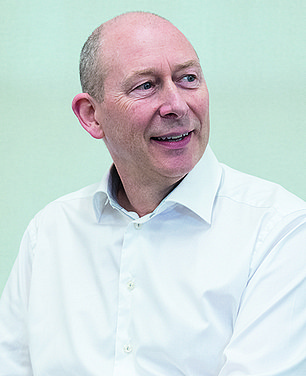 Out: chief exec and major shareholder Jonathan Miller left McColl’ a month ago

Retail analyst Nick Bubb said it was the latest chapter in ‘not a very happy story’.

He said: ‘It’s a combination of things. It’s bad luck, it’s the supply chain crisis, but there is a lot of bad management around and the chief executive has gone.

‘The banks are in the ruling seat.

‘A number of people have clearly been looking at it including Morrisons, but why would you buy it when it is about to go bust? I think it will all unravel when they reach an agreement with the banks.’