A 19-year-old has been charged for throwing a firework at the Liver Building on a night when Merseyside police officers were struck by missiles and pushed to the ground by Liverpool supporters as ugly scenes broke out in the city centre on Friday.

Matthew Egglesden, 19, has been charged by police for causing criminal damage after a firework was thrown from Pier Head and exploded on collision with the building.

He is scheduled to appear at Liverpool Magistrates court on Monday and the police are now stepping up their efforts to identify others who were involved in violent clashes with officers on the ground.

Liverpool clinched their first league title in 30 years on Thursday night and on Friday, more than 1,000 people gathered at Pier Head in the city centre to continue the celebrations, only for violence to overshadow the gathering.

Mayor of Liverpool Joe Anderson shared a video of the violence and said that 300 fans ‘fought for over two hours’ with police before it all subsided in the early hours of Saturday morning. 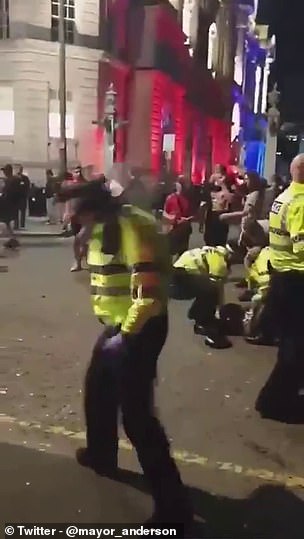 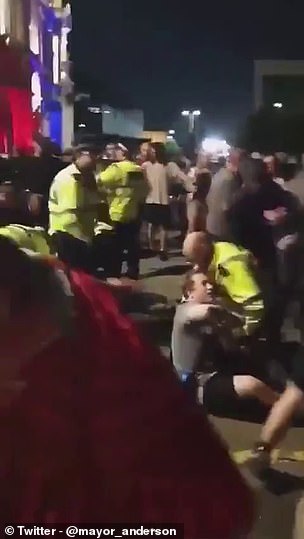 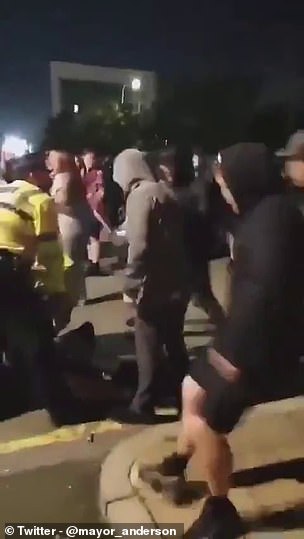 ⁦@MerseyPolice⁩ Police officers were attacked Last night and injured they are public servants doing their job. Absolutely shocking behaviour no excuses if any body knows anyone please identify them to the Police. 300 fought with Police on Strand for over 2 hours. #shameful pic.twitter.com/YoEERZqcld 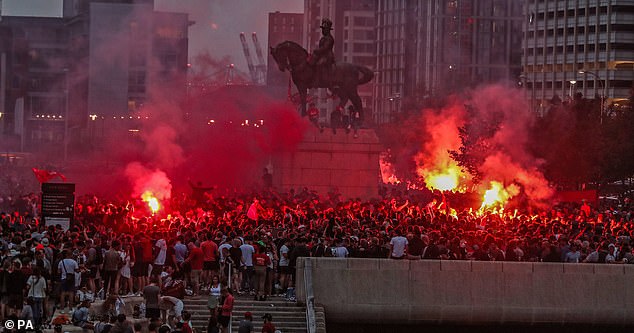 More than 1,000 fans gathered in the city centre and police confirmed 15 arrests were made 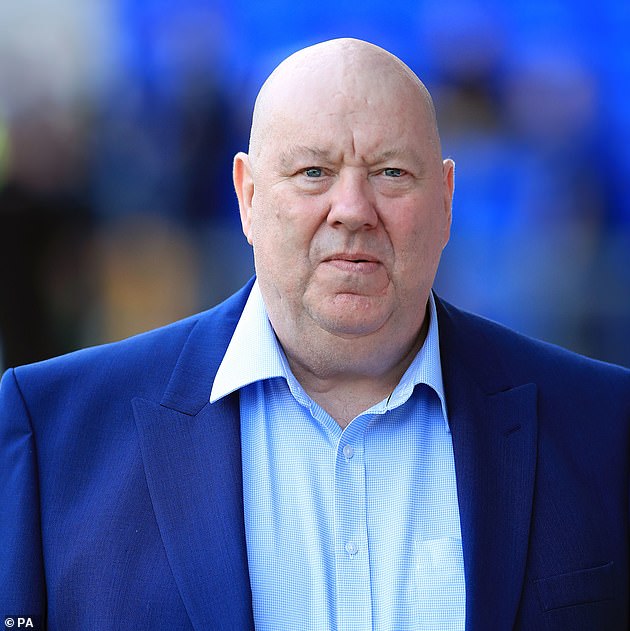 Anderson said he was left heartbroken following the violent scenes and believes the ‘mindless behaviour’ damages the city’s reputation.

Missiles were thrown at officers and Merseyside Police confirmed 15 arrests were made with CCTV and body-cam footage to be analysed to look for any more perpetrators.

Following confirmation of Liverpool’s first Premier League title, shocking scenes have been captured, including fireworks being thrown at the city’s iconic Liver building. The fireworks led to a fire on a balcony on the side of the building.

The video shows police being pushed and struck by objects after they have one man restrained on the floor.  In the final moments of the clip, some individuals step in to help the police and diffuse the situation. 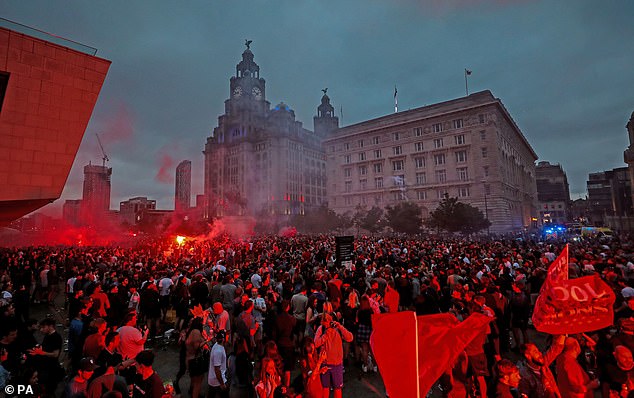 In a statement released on Saturday, Chief Constable Andy Cooke said: ‘One man was arrested for assault after another man suffered head injuries. The injured male was taken to hospital where he remains in a serious condition. Two officers also suffered minor injuries after missiles were thrown at them by people in the crowd.

‘The crowds dispersed from the Pier Head at around 1:30am. But soon after there were reports of further crowd issues in other parts of the city centre. Officers intervened but again missiles were thrown at them.

‘In total 15 people, at the Pier Head and in the city centre, were arrested for various offences including public order offences, drunk and disorderly and affray.’

The gatherings, which included a huge gathering outside Anfield on Thursday night after the league title was confirmed, have been condemned with a frustration at the disregard for social distancing rules amid the ongoing coronavirus pandemic.

‘I cannot stress enough that these gatherings put an unnecessary strain on our emergency services and could mean that we might not be able to get to other people who really need us,’ Cooke added.

‘In the coming days we will be reviewing CCTV and Body Worn Camera footage to identify those involved in criminal and anti social behaviour and we will be issuing images through the media to find those responsible. I would urge anyone who has any information about those involved to contact us. 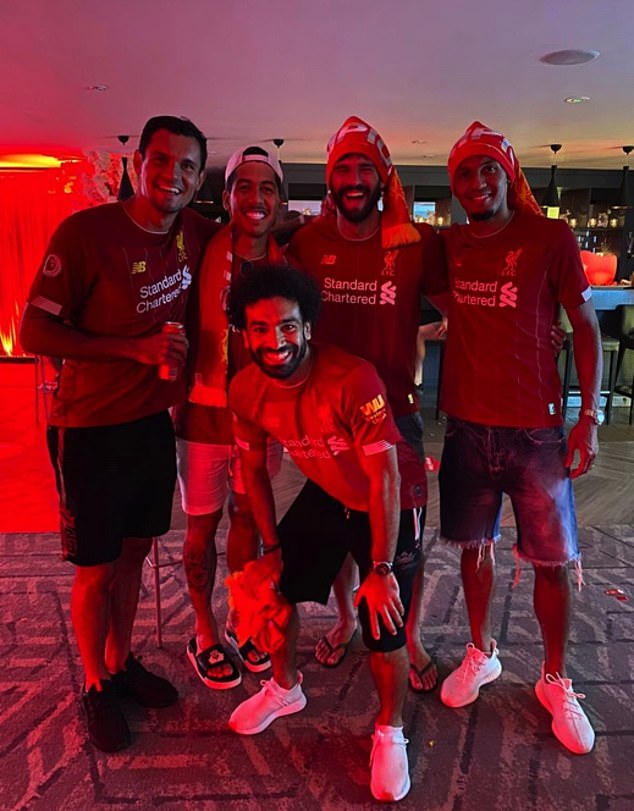 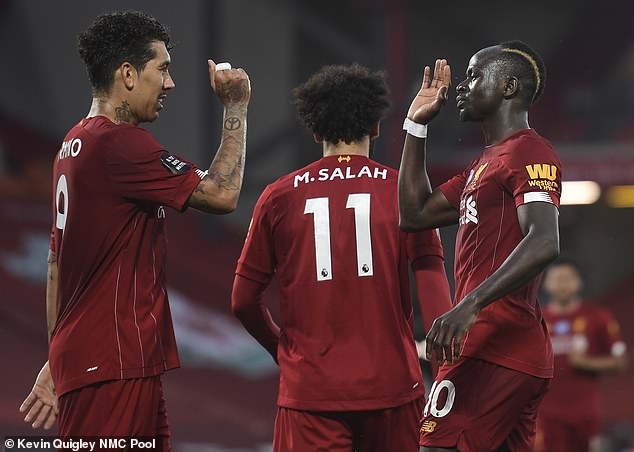 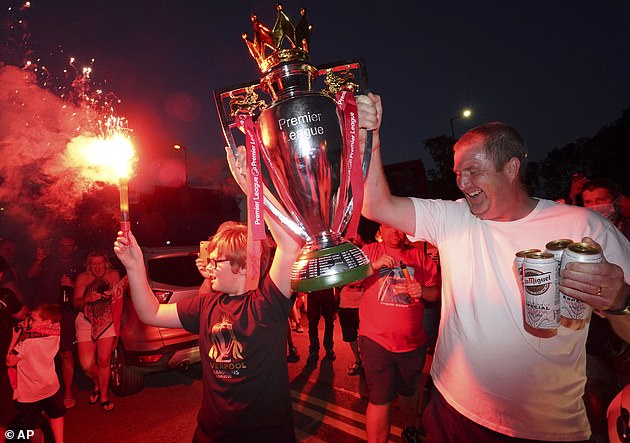 ‘We are still in a public health crisis and we need to work together with the public of Merseyside to prevent the further spread of Covid-19.’

Following sharing the video, Mayor Anderson added in the police statement: ‘An occasion for celebration has been turned instead into headlines of disgraceful behaviour.

‘Our city is, rightly, proud of the phenomenal success of one of our football teams. But the time for public celebration in crowds is not now. Our city remains in the grip of a major public health crisis and this behaviour is wholly unacceptable. Let me be clear – lives are at risk.

‘Seeing thousands of people congregating at the Pier Head into the early hours and the ugly scenes shared on social media afterwards was heartbreaking to see. Fireworks, flares and tons of litter, amount to nothing but disrespect for our city.

‘This mindless behaviour has the potential to damage Liverpool’s reputation – both the club’s and the city. I don’t believe this is how the team would like their achievement to be remembered.’

Liverpool FC had earlier put out a joint statement with police and the council in which they condemned supporters failing to abide by social distancing rules. 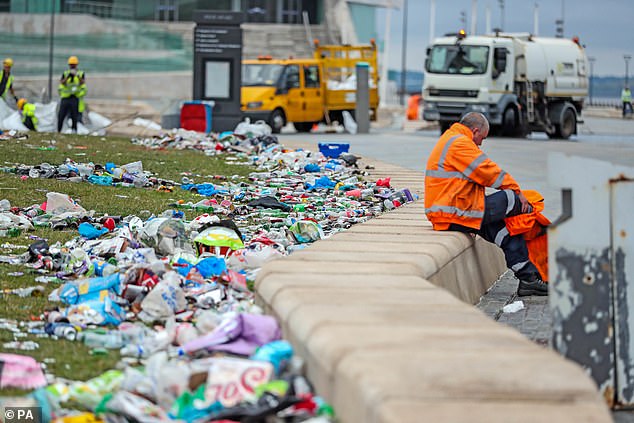 Following the mass gathering, there was a deluge of litter strewn across the city centre

The statement read: ‘Several thousand people turned up at the Pier Head on Friday June 26 and some chose to ignore the social distancing guidance and risk public safety.

‘Our city is still in a public health crisis and this behaviour is wholly unacceptable.

‘The potential danger of a second peak of Covid-19 still exists and we need to work together to make sure we don’t undo everything that has been achieved as a region during lockdown.

‘When it is safe to do so, we will all work together to arrange a victory parade when everyone can come together to celebrate. Until that time, the safety of our city and our people continues to be our number one priority.’

Anyone that has any further information on flares that were set alight on Friday night, who threw a firework at the Liver Building, or any other criminal incident that may have occurred is urged to get in touch with Merseyside Police. They can be reached @MerPolCC or contact @CrimestoppersUK anonymously.