EXPRESS INFORMER > News & Politics > Mature student, 48, Tasered in his underpants as he studied in bed sues Met Police for £40,000

A mature student who says he was left with PTSD and forced to drop out of university after being Tasered in his underwear when police burst into his bedroom while he studied is now suing for £40,000 compensation.

Carl Plumbley, 48, claims he was blasted at least four times in the chest when a Metropolitan Police officer stormed into his bedroom after ‘steaming up the stairs like the Gestapo’.

The October 2015 incident in Ansley Close, Croydon, followed a call to police from Mr Plumbley’s partner, who had asked him to ‘leave the house’ after a row.

The Met is resisting his claim, insisting the force used was reasonable and proportionate – and only deployed in response to aggression and provocation from Mr Plumbley.

London’s High Court heard Mr Plumbley was handcuffed and arrested, and later convicted of assaulting a police officer by magistrates in July 2016, and fined £220.

Carl Plumbley (pictured outside London’s High Court), 48, claims he was blasted at least four times in the chest when a Metropolitan Police officer stormed into his bedroom after ‘steaming up the stairs like the Gestapo’

He then successfully challenged his conviction, which was overturned on appeal in December 2016.

Mr Plumbley, who was then studying for a degree in oil and gas management at Greenwich University, was clad in nothing but underpants and a t-shirt when the officer confronted him from the doorway.

Just before the young officer arrived, he had been working on his iPad and checking the dates for upcoming exams and assignment deadlines, he told the court.

‘He stood at the door and said to me, ”what’s going on mate?” he told a judge.

‘I told him that I wanted to get dressed and I would come and speak to him. I got up from the bed to shut the door, as I wanted to get changed without the police officer present in my room.

‘I then shut the door. The next thing I know the police constable has barged the door wide open and started to reach for something which I know now to be a Taser gun.

‘He then Tasered me in the chest, the barbs penetrated my skin. I was Tasered at least four times. It was a horrifying experience and I really felt it was the end of me.

‘On the fourth Taser activation I collapsed on the floor, banged my head as I fell and I wet myself on the floor.’ 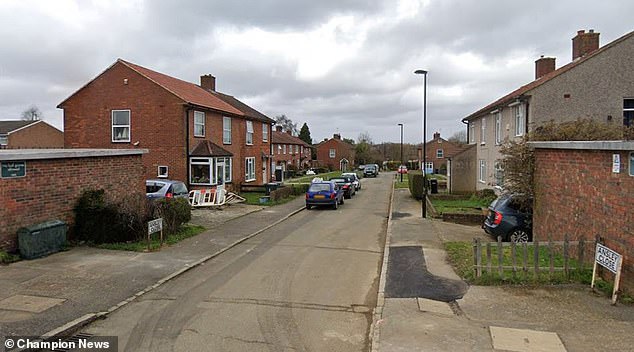 The October 2015 incident in Ansley Close (pictured), Croydon, followed a call to police from Mr Plumbley’s partner, who had asked him to ‘leave the house’ after a row

‘I believe a couple of seconds more and I’d have been dead,’ Mr Plumbley told the court, adding: ‘It totally dismantled me, I was writhing in agony’.

Mr Plumbley was a mature student at the time, struggling to make his way through university while also working late hours as a doorman around Shoreditch.

He told Judge Carmel Wall the alleged unlawful assault haunted him with symptoms of PTSD, for which he needed intensive trauma therapy.

On top of that he ‘lost sensation to the left side of my face and body, and started to experience a high degree of lumbar pain which prevented me going to work as a doorman or attending the gym’.

Mr Plumbley, who was in the second year of his degree when injured, said the Tasering wrecked his concentration and studying, and the court heard he later quit his university course.

In court this week, he denied swearing at the cop and telling him to ‘f*** off’, as well as claims by the Met’s barrister, Paul Stagg, that he ‘threatened the officer when he walked in’.

Mr Stagg said the Taser was fired after the burly Mr Plumbley seemed to become ‘enraged’ and came towards the officer.

‘The PC felt there was no alternative but to subdue Mr Plumbley with the Taser, and deployed it and fired it into his chest,’ he said.

In all, the officer fired off three ‘cycles’ of the Taser to subdue Mr Plumbley because he ‘continued to resist the effects of the Taser and to attempt to get up’, the barrister claimed.

Mr Stagg also disputed Mr Plumbley’s claim to have left university due to the ongoing effects of the incident, and suggested he ended up leaving college because he failed a key exam.

But the ex-student insisted: ‘I couldn’t keep up with the work – until the incident I was up to date with all my work’.

The barrister then put to him: ‘You will say anything in order to get a large amount of cash from the police to help you out given that you are now on benefits and unemployed?’