Matt Lodge walked out on the New Zealand Warriors last Friday due to an ongoing personality clash with club owner Mark Robinson – and was promptly given a $700,000 golden handshake.

The controversial prop, 26, who has also played in the NRL for the Wests Tigers and Brisbane Broncos, informed Warriors coach Nathan Brown last Friday he wanted to leave the club, effective immediately.

Lodge was quickly granted a release by CEO Cameron George, with Robinson revealing on Thursday why the front-rower is no longer on the club’s books.

‘We had an argument in a hotel, two alpha males in a pub last December,” Robinson told the Daily Telegraph.

‘There’s no bad blood with Matt Lodge at all. It (release) was a simple business transaction.’

NRL star Matt Lodge Matt Lodge (pictured middle) played second grade rugby union in Brisbane this week with Norths – just a few days after he was released by the New Zealand Warriors and given a $700,000 golden handshake 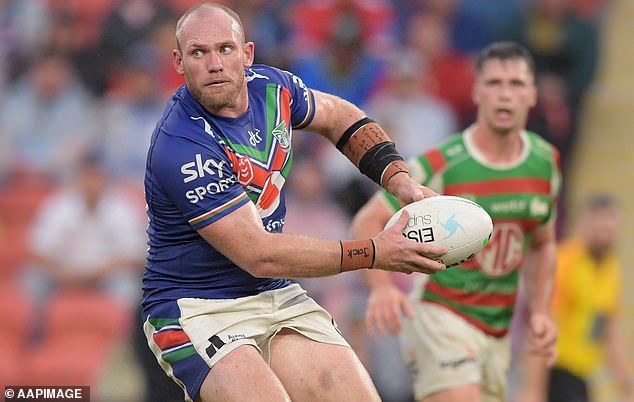 Earlier this week, Brown said one of the main reasons Lodge moved on was that he didn’t want to live across the Tasman next year with his family.

The Warriors are based in Redcliffe, Queensland for the current NRL season – but will relocate to Auckland in 2023.

Speculation is also mounting the journeyman front-rower may end up at the Manly Sea Eagles, after he purchased a home on Sydney’s northern beaches at Bayview.

Effectively now a free agent, Lodge turned up for a run with Norths in the Brisbane club rugby union competition on Tuesday night.

He played 50 minutes off the bench as a No.8 in a rescheduled second-grade game, having reportedly paid his registration fees to play ‘on the spot’.

It is unknown if Lodge plans to pursue a professional career in the rival footy code.

‘If he (Lodge) wants to play, happy days, we will pick him in first grade but he might have an NRL contract soon,’ Norths coach Pat Byron told the Sydney Morning Herald.

‘He asked us if he could have a game…he paid his subs on the spot, bought his socks and shorts and they brought him on.’

In October of 2015, Lodge was arrested in New York after allegedly assaulting a man and threatening two women – only months after he was stood down from the Wests Tigers for stalking charges. 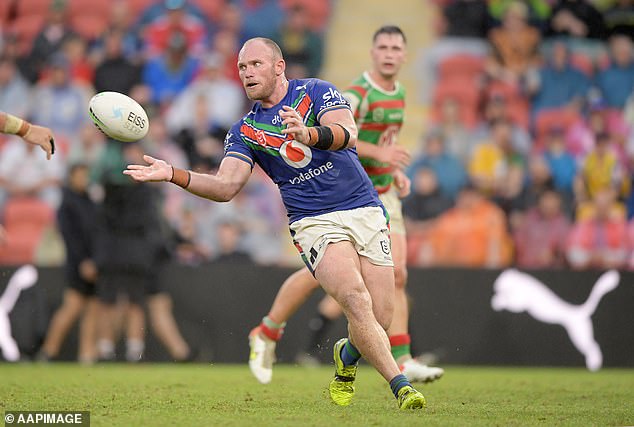 Effectively now a free agent, Lodge turned up for a run with Norths in the Brisbane club rugby union competition on Tuesday night in second grade

Lodge was taken into custody when he followed two women to an apartment, told them ‘this is the night you die’ and assaulted a man.

He was charged with criminal mischief, reckless endangerment, criminal trespass, assault and menacing.

Lodge eventually reached a confidential settlement compensating victims over his drunken rampage in the Big Apple.

After two years out of the NRL, he signed with the Broncos for the 2018 season and then joined the Warriors last year.

The NRL rumour mill has also suggested Lodge may reunite with Wayne Bennett at the Dolphins, who enter the competition as the 17th club franchise next March.