An effective vaccination for the disease is yet to be developed anywhere in the world but Mr Hancock said if one is he would hope that ‘everybody would have the vaccine’.

But asked directly if getting the jab could be made mandatory, Mr Hancock said the question was ‘not one that we have addressed yet’.

The UK’s coronavirus testing tsar, Professor John Newton, then went further as he confirmed requiring people to get vaccinated is an option available to the Government. 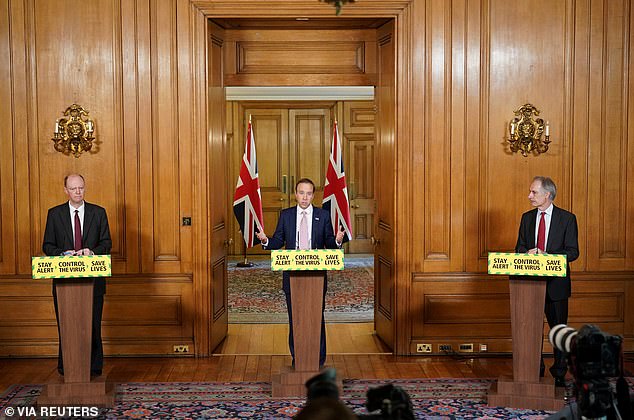 Professor John Newton, pictured right, then said a mandatory programme of vaccinations is an option for the Government but that the most successful programmes ‘tend to be by consent’

The UK Government has made tens of millions of pounds available to coronavirus vaccine research.

Two UK projects – one at Oxford University and one at Imperial College London – are viewed as frontrunners in the race to develop a working jab.

ARE VACCINATIONS COMPULSORY IN THE UK?

Vaccinations in the UK are not compulsory.

In September 2019, Matt Hancock said the Government was ‘looking very seriously’ at making vaccines mandatory for pupils in state schools.

But No10 pushed back on the idea and said, despite dropping rates of children being vaccinated, it was not going to refuse admission.

The devolved governments of Scotland, Wales and Northern Ireland – which have power of health policy – have followed suit with the Westminster government.

In Europe many countries do require vaccinations.

Germany this year introduced £2,000 fines for parents who failed to show proof their children had been vaccinated against measles.

Countries with the highest requirements include France, Italy and Greece. They mandate 11, 10 and 14 vaccinations respectively.

Bulgaria, the Czech Republic, Hungary, Latvia, and Poland require babies to be vaccinated against tuberculosis.

Other diseases for which vaccines are commonly compulsory in Europe include diphtheria, tetanus, pertussis, poliomyelitis, measles, mumps, and rubella.

In 1853, England and Wales made a law requiring vaccinations against smallpox. Fines were dished out to those who did not comply.

Oxford University has done a deal with pharmaceutical giant AstraZeneca to make millions of vaccines if its efforts prove successful. Ministers are hoping that could result in 30 million doses being ready for Britain by September.

Appearing at the daily Downing Street coronavirus press conference, Mr Hancock was asked whether getting the vaccine would be made compulsory and if not, how ministers would bridge the difference of opinion between people who are in favour and those who are not.

He replied: ‘The first point to make is we are doing everything we can to get a vaccine and we will only recommend a vaccine if it is safe and that means that if we get a vaccine and I very much hope that we will and we are working incredibly hard for that and people are asked to vaccinate, to take that vaccine, then they absolutely should because we will only do it on the basis of clinical advice that it is safe.

‘The question of whether it is mandatory is not one that we have addressed yet. We are still some time off a vaccine being available.

‘But I would hope given the scale of this crisis and given the overwhelming need for us to get through this and to get the country back on its feet and the very positive impact that a vaccine would have that everybody would have the vaccine.’

It is not the first time the Health Secretary has expressed an opinion on compulsory immunisation.

Mr Hancock is a vehement critic of anti-vaccination campaigners and in September 2019 he said the Government was ‘looking very seriously’ at making vaccinations compulsory for state school pupils.

Prof Newton said the ‘most successful vaccine programmes tend to be by consent’ and they are based on a ‘clear explanation of the benefits and any risks’.

However, he added: ‘So although some countries have adopted mandatory programmes, the most successful programmes tend to be done on the basis of consent, good information and good delivery mechanisms.

‘But clearly mandation is there, it can be used in some instances.’

Professor Chris Whitty, the Chief Medical Officer for England, suggested the way forward could be determined by the type of vaccine which may emerge.

He explained: ‘If you think about vaccines, there are a lot of different sorts of vaccines, but you can broadly use them in two ways.

‘The first way which everybody thinks about is as an epidemic modifying vaccine. This is you give it to the whole community rather like MMR and that protects everybody from getting these infections.

‘But the other way you can use a vaccine is that you can use it as a disease modifying vaccine.

‘You give the vaccine to those people who are most at risk and you might do this because there isn’t enough vaccine… or you might do it because it is a partially effective vaccine that can stop people dying but is not enough to stop the transmission of the virus.

‘In that case you would give it to a much smaller number of people. Clearly in that second group you are absolutely doing it only to protect the person who is being vaccinated.

‘If they choose not to have that protection, it doesn’t affect anybody else. It is simply their choice but then they obviously are denying themselves the protection that this kind of vaccine could provide.’