Matt Hancock today claimed the new cases of coronavirus ‘variants of concern’ are falling despite a Public Health England update showing they higher than last week.

The Health Secretary said confirmed cases of these mutated versions of the virus are ‘fallen quite sharply’ and that only 12 were discovered last week, boasting ‘the measures we are taking at the border are working’.

But a Public Health England report updated today showed that 42 more infections with variants of concern were found between February 17 and February 22.

The South African variant was detected 23 more times, taking the total to 258, and it has been seen in Northern Ireland for the first time, in three people.

This is the variant causing most concern among politicians and scientists because it is widespread in other parts of the world and may make vaccines less effective.

It carries a mutation called E484K that makes immune cells produced in response to other versions of the virus less able to attach to it and stop it, which makes reinfections more likely.

A further four cases of an older variant with the same mutation, first found in Liverpool, were announced, along with four cases of the Bristol variant; and seven of a new one discovered dotted around the UK.

The Department of Health did not respond to a request for clarification about Mr Hancock’s comment.

Matt Hancock said on Sky News this morning that ‘the number of new variant cases we’re finding across the whole UK is falling, and has fallen quite sharply over the last month’ – but PHE’s report does not back up his claim 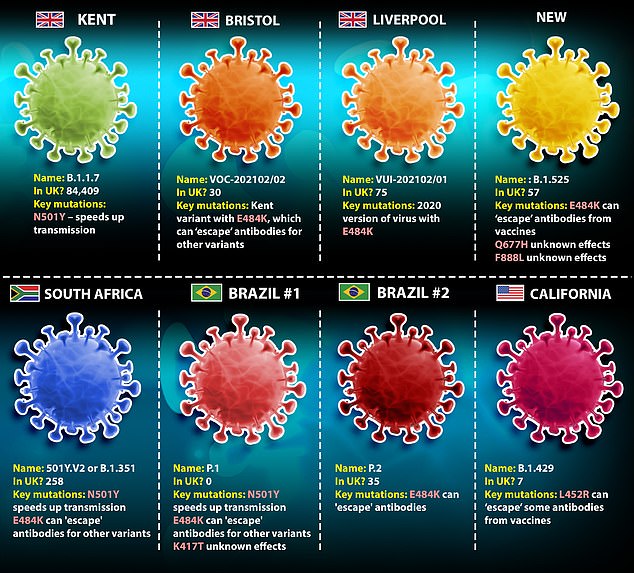 More cases of all the UK variants and the South African one have been found within the past week, PHE data show

Mr Hancock said today on Sky News: ‘The good news is that the number of new variant cases we’re finding across the whole UK is falling, and has fallen quite sharply over the last month.

‘In the last week or so, there were just over a dozen new cases, which is far smaller than we were seeing even a couple of weeks ago.

‘So the extra measures we are taking at the border are working and also the lower case rate makes it much less likely that there will be new variants here because new variants tend to arrive when you’ve got an area that’s got a very high case rate.’

But Public Health England’s report does not support his claim.

Its regular update of new cases of variants of concern was published today, tracking the strains of the virus carrying mutations that could make vaccines less effective, as well as the now-dominant Kent variant, of which over 84,000 cases have been found.

More cases of all the variants of concern were uncovered in the last week, it showed.

This includes the South African variant, one from Brazil and mutated versions native to the UK, first found in Liverpool and Bristol and another spread around the country.

In a bid to try and control mutated variants of the virus, the Government has started surge swab testing in areas where cases are detected, it now mandates that everyone have proof of testing negative before entering the country, and has quarantine hotels for people returning from ‘red-list’ countries thought to be a risk.

Mr Hancock praised these for keeping variant cases under control but Public Health England has not yet confirmed how many of the new infections were imported.

Anyone travelling into the UK from another country must prove that they have tested negative for coronavirus within the three days before travelling.

When they get to Britain they must also quarantine themselves for 10 days and do swab tests on days two and eight of the self-isolation to prove they are not infected.

WHAT ARE THE VARIANTS?

A variant is a version of a virus that has mutated in a way that makes it different to other types, but they are all still the same coronavirus that causes Covid-19.

The main concerning mutations that have led to new variants emerging in the UK are these:

Mutation N501Y: This changes the spike protein on the outside of the virus to make it bind better to human cells and therefore spread faster.

Mutation E484K: This changes the spike protein in a way that makes the virus able to dodge some of the immune cells and proteins developed in response to older versions of the virus or vaccines based on older variants.

These are the key variants being talked about by Public Health England:

Also known as B117. This carries the N501Y fast-spreading mutation and has been the main version of the virus in England since around Christmas.

Also known as B1351. This has both N501Y and E484K, meaning it can spread fast and may get past the immune system. 170 cases have been confirmed in the UK.

Known as P1, this has both N501Y and E484K, but is different to the South African variant in other ways which are not yet thought to be important. It has not yet been found in the UK but is a cause for concern because it is fast-spreading and may get past immunity.

Known as P2, this has the E484K mutation. It has been found 24 times in the UK. Officials aren’t particularly worried about it because it is likely slower-spreading than the above.

This is a version of the Kent variant that has developed the E484K mutation. This means it is both fast and may get past immunity. Its key mutations are the same as those of South African and Brazil variant 1, but it is genetically different in other ways so has its own name. 21 cases have been found in the UK.

This is similar to Brazil variant 2. It does not have N501Y like the others, and is based on the version of the virus that was dominant before the Kent variant. But it has picked up the E484K mutation. It is likely slower to spread but may get past the immune system. 55 cases have been found in the UK. Professor Nick Loman, a PHE adviser, said it hasn’t been seen in ‘a long time’.

If travelling from a ‘red list’ country, which have been deemed to be high risk, people will only be allowed into the country if they are citizens and they must follow the same protocols but quarantine in a hotel rather than at home.

These nations include Portugal, Brazil, South Africa and countries in Africa, South America and some in Asia.

Testing everyone at the border, the Government hopes, will prevent people from coming into the UK while infected with coronavirus.

This should in turn reduce the risk of variants not normally found in the UK being transmitted there by travellers.

The spread of differing variants across Britain has become a hot topic since the turn of the year because of the risk that one will render the long-awaited vaccines less effective.

Most concerning is the spread of the E484K mutation that appears to give the virus the ability to get past immunity developed against older versions of the virus.

This mutation initially appears randomly – and it appears to do so fairly often – but sometimes becomes a permanent feature of a variant because it gives it an advantage in that it can reinfect people who would be protected against other versions of the virus.

The fact that the variant cases have been discovered during lockdown, said PHE’s Dr Susan Hopkins, was a cause for immediate action because it presented an opportunity to control them while people are not mixing much.

‘It is reassuring [that] we aren’t seeing week-on-week increases in either of them and the data is staying flat,’ Dr Hopkins told a briefing earlier this month.

‘I think why we’re getting on top of these now is because the R is below one… when we release in March, April and May, things will be more challenging.’

While none of the variants of concern look to be spreading fast out of the areas where they were first discovered, this could change when rules are eased.

Professor Nick Loman, a genomics expert at the University of Birmingham, member of COG-UK and PHE adviser, added: ‘What applies in a lockdown is not necessarily going to be true when we relax measures.

‘The fact that the South African variant is not doing well now doesn’t mean it won’t [when lockdown ends].’

Coronavirus swab testing has been scaled up in various parts of England where the worrying variants of the virus have been found.

Neighbourhoods are being visited by officials bearing test kits and walk-through centres have been set up for people with no symptoms in most regions.

Although ministers and health officials believe they can get on top of the variant cases with this surge testing and more rigorous contact tracing during lockdown, scientists have warned that the cases they’re finding are only the ‘tip of the iceberg’.

COG-UK only examines around 15 per cent of positive tests to find out which variant they were caused by.

This suggests that the number of cases of each variant that they find could be multiplied by around seven to get to a more accurate number – so there may already have been 1,800 cases of the South African variant from the 258 detected.

Dr Hopkins said it was still a ‘relatively small number’ and added: ‘If R is below one and transmission is reducing we wouldn’t expect those cases to be increasing…

‘When we have another variant that’s out-competing it more than 1,000-fold it’s still a minor variant.’