‘Lunatic conspiracy theories’ linking 5G to coronavirus saw 20 masts set on fire over the Easter weekend including one serving the Birmingham Nightingale hospital.

One of the attacks was on a mast used by emergency services in Huddersfield and another in Dagenham saw three teenagers arrested on suspicion of arson.

Doctors have dismissed claims 5G signals cause coronavirus or act to weaken the immune system, saying the waves carry too little energy to cause harm.

Police say they are working to determine the nature of the incident in Huddersfield, which was one of 20 mobile phone masts set ablaze over the Easter weekend 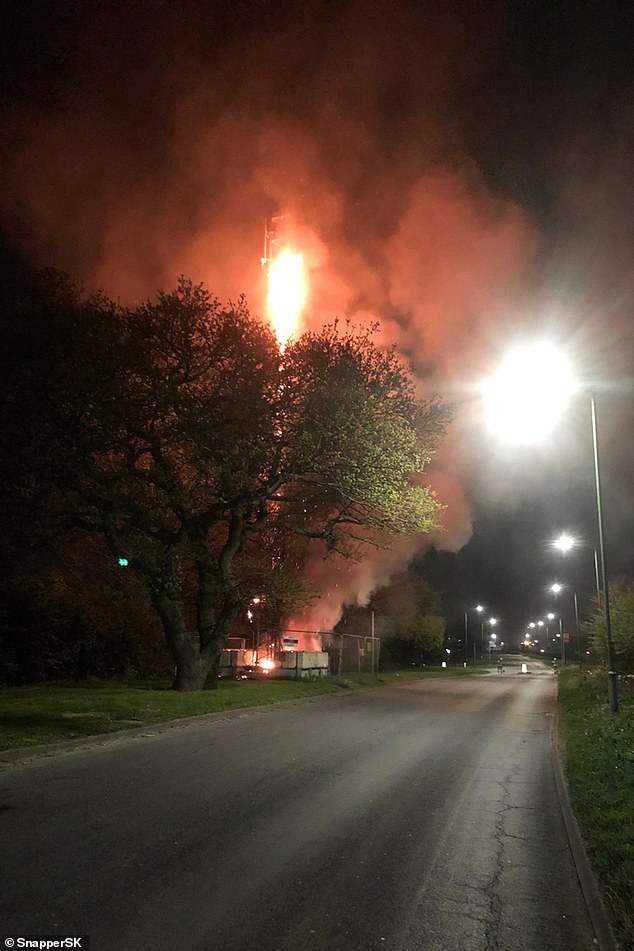 Pictured: The view from the street after people set fire to a 4G mast in Solihull, West Midlands which was burned by conspiracy theorists believing it to be a 5G mast

Culture Secretary, Oliver Dowden, described the idea that 5G causes coronavirus as ‘lunatic conspiracy theories’ in an interview with the BBC.

He was urging Ofcom to take action against people spreading the fake news in broadcast interviews.

This Morning presenter Eamonn Holmes was forced to apologise over a 5G rant that saw him claim it ‘suited the state narrative’ to dismiss bizarre theories linking 5G to COVID-19.

On Tuesday he admitted that there is ‘no evidence’ of a link connecting the coronavirus and the new technology.

Holmes wasn’t the only personality to come under fire for 5G coronavirus remarks in recent weeks.

David Icke aired unsubstantiated theories about the virus during an interview for London Live.

He repeatedly said there was a link between 5G mobile technology and coronavirus – a theory heavily discredited by experts.

Last week conspiracy theorists in Solihull, West Midlands set fire to a 4G tower believing it to be a 5G mast, adding to the spate of arson attacks.

There is no scientific evidence that 5G technology poses any threat to human health and it was confirmed as safe by the radiation watchdog last month.

Despite the evidence against their claims, conspiracy theories circulating around the web argue that elites are using the masts in order to weaken the immune systems of people so that they are more susceptible to getting coronavirus.

NHS GP Gero Baiarda said it is impossible for the signals carried by 5G masts to impact the immune system in the ways being claimed.

Coronavirus is passed between individuals either by direct human contact or by picking it up on hands and passing it to the eyes or mouth.

‘There have been many research studies that demonstrate this beyond all doubt,’ Baiarda said after watching 5G masts being burned on YouTube.

‘The wavelengths emitted from your microwave oven are more powerful than 5G – both are perfectly safe,’ the GP added.

Meanwhile, Mobile UK, the trade body which represents all network providers, said ‘careless talk could cause untold damage’ following comments about the issue by Eamonn Holmes on Monday’s edition of This Morning.

The Metropolitan Police was called to a telecoms mast fire on Becontree Avenue in Dagenham at 01:34 BST on Tuesday. 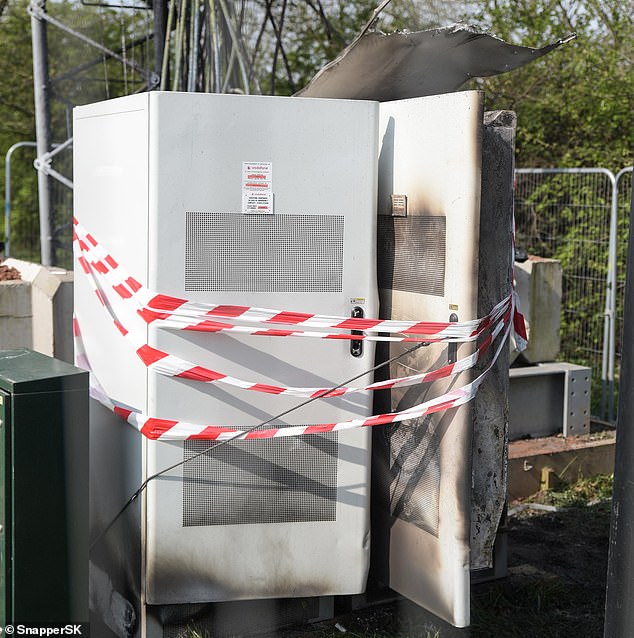 Pictured: The remains of the 4G mast after the bungled attack in Solihull, West Midlands

Four fire engines and around 25 firefighters attended the incident, which is the latest in a spate of suspected arson attacks targeting mobile masts around the country.

The government is meeting with the major social media companies to see what they can do to reduce the amount of ‘crackpot theories’ being spread online.

A YouTube spokeswoman said in a statement that the platform is seeking to reduce ‘the spread of harmful misinformation’.

She added: ‘We have clear policies that prohibit videos promoting medically unsubstantiated methods to prevent the coronavirus in place of seeking medical treatment, and we quickly remove videos violating these policies when flagged to us.

‘Now any content that disputes the existence or transmission of Covid-19, as described by the World Health Organisation and local health authorities is in violation of YouTube policies.’

West Yorkshire Police are also investigating a fire which took place in the early hours of Tuesday involving a phone mast attached to a chimney on Lower Quarry Road in Huddersfield.

West Yorkshire Fire and Rescue Service said the incident destroyed communications equipment belonging to three mobile network providers, one of which is used by the emergency services.

The cause of both incidents is not yet known, and it is not clear whether they involved 5G masts or older technology.

However, it comes as theories linking 5G to the spread of COVID-19 have been widely condemned by experts from health and technology industries. 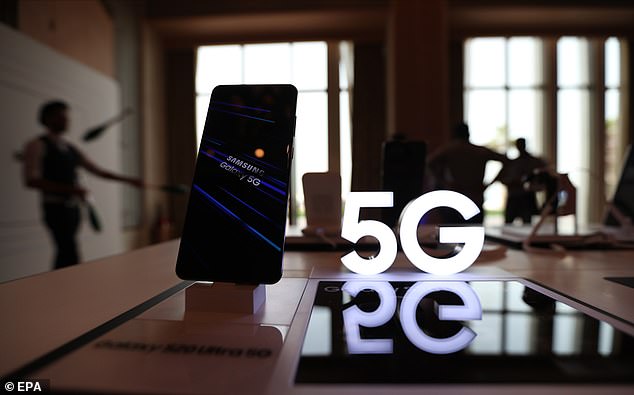 New regulations for the highest parts of the 5G spectrum – up to 6Ghz do not currently apply to the UK and the US as no carriers use frequency in that spectrum. However even if they did the regulations apply to the handsets such as the Samsung Galaxy S20 – rather than the masts

A spokesman for Mobile UK described the theories being spread about 5G as ‘baseless’ and not grounded in any credible scientific theory.

‘Mobile operators are dedicated to keeping the UK connected, and careless talk could cause untold damage,’ the spokesman said.

‘Continuing attacks on mobile infrastructure risks lives and at this challenging time the UK’s critical sectors must be able to focus all their efforts fighting this pandemic.’

Ofcom said it will assess comments made by Holmes as a ‘priority’, after the watchdog received more than 400 complaints.

On Monday, the 60-year-old weighed in on the ITV show after presenter Alice Beer branded the conspiracy theories ‘ridiculous’ and ‘incredibly stupid’.

He told Beer: ‘I totally agree with everything you are saying but what I don’t accept is mainstream media immediately slapping that down as not true when they don’t know it’s not true.

‘No-one should attack or damage or do anything like that but it’s very easy to say it is not true because it suits the state narrative.’

Holmes attempted to ‘clarify’ his comments on Tuesday, saying: ‘Every theory relating to such a connection has been proven to be false and we would like to emphasise that.

‘However, many people are rightly concerned and looking for answers and that’s simply what I was trying to do, to impart yesterday. 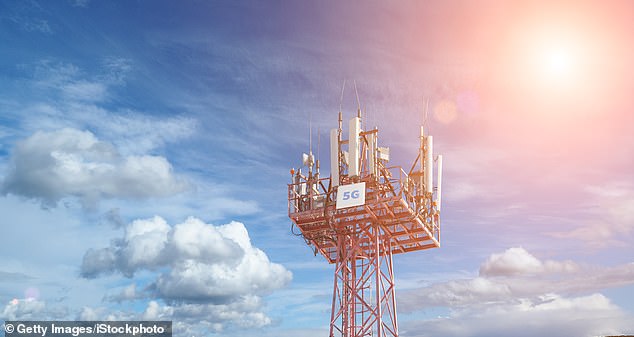 Testing by UK communications regulator Ofcom of existing 5G masts found that they were using a ‘small fraction’ of allowable emissions with the highest reading at just 1.5 per cent of the maximum level

‘But for the avoidance of any doubt, I want to make it clear there’s no scientific evidence to substantiate any of those 5G theories. I hope that clears that up now.’

Since the beginning of April, West Midlands Police said it had received eight reports of telecommunications infrastructure being set on fire or otherwise vandalised.

Although one incident is presently unconfirmed, all eight reports remain under investigation by the force.

Believers point to the fact that masts went up in the same year that Covid-19 originated in Wuhan, China, but don’t account for the fact that Iran, which has been disastrously affected by the virus, has no masts.

Brendan Wren, professor of microbial pathogenesis, at the London School of Hygiene and Tropical Medicine, said a connection between the phone masts and the virus would be ‘both a physical and biological impossibility’.

‘Here, we also see similar groups of people keen to show their ignorance on a topic where they have no helpful expertise, nor any inclination to post useful public health messages.’

The world health organisation has branded the spread of disinformation about COVID-19 on social media platforms as an ‘infodemic’.

WHAT IS 5G AND WHAT DOES IT DO?

The evolution of the G system started in 1980 with the invention of the mobile phone which allowed for analogue data to be transmitted via phone calls.

Digital came into play in 1991 with 2G and SMS and MMS capabilities were launched.

Since then, the capabilities and carrying capacity for the mobile network has increased massively.

More data can be transferred from one point to another via the mobile network quicker than ever.

5G is expected to be 100 times faster than the currently used 4G.

Whilst the jump from 3G to 4G was most beneficial for mobile browsing and working, the step to 5G will be so fast they become almost real-time.

That means mobile operations will be just as fast as office-based internet connections.

Potential uses for 5g include:

5G is expected to be so quick and efficient it is possible it could start the end of wired connections.

By the end of 2020, industry estimates claim 50 billion devices will be connected to 5G.

The evolution of from 1G to 5G. The predicted speed of 5G is more than 1Gbps – 1,000 times greater than the existing speed of 4G and could be implemented in laptops of the future