Mass coronavirus testing being used in Liverpool will be rolled out across 66 local authorities, the Health Secretary claimed today.

Matt Hancock revealed areas including Nottinghamshire, Yorkshire and the West Midlands will receive the rapid Covid-19 tests. London, Birmingham, Manchester and Coventry are also among the cities to get a batch of tests.

At least 600,000 lateral flow tests will be sent out across the UK this week to kick-start the next stage of mass coronavirus testing, which ministers hope could finally send the virus packing.

The antigen tests can tell if a person is currently infected with coronavirus – even if they have no symptoms – and the technology can give results within an hour.

Every resident in Liverpool has been able to get tested for the disease since Friday, when the major army-backed scheme was first launched. The city, home to 500,000 people, was the first to be involved with No10’s ambitious ‘Operation Moonshot’ — a mission to screen millions of asymptomatic people every day.

Mass coronavirus testing being used in Liverpool will be rolled out across 66 local authorities, the Health Secretary claimed today 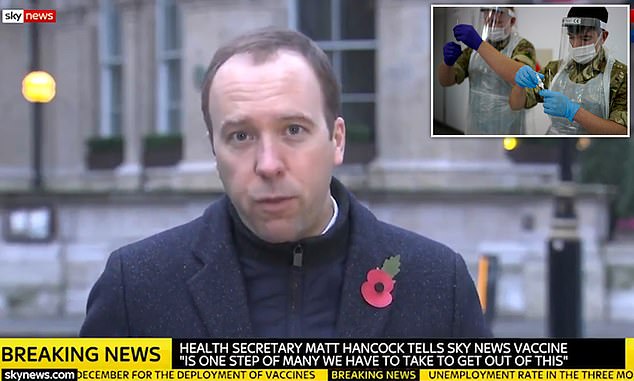 Speaking on Sky News on Tuesday, Matt Hancock said mass coronavirus testing being used in Liverpool will be rolled out across 66 local authorities 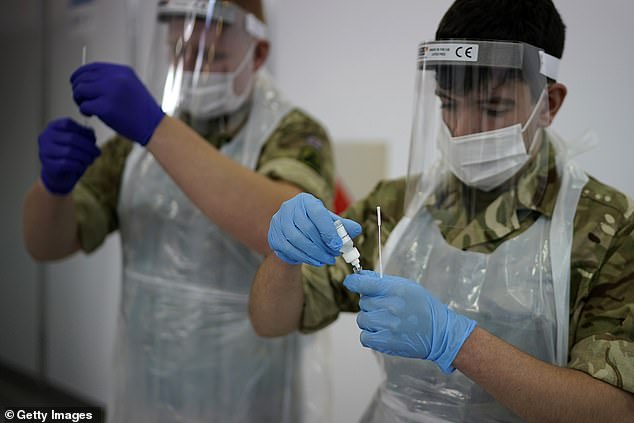 Lateral flow tests have been available since Friday for people who live and work in Liverpool, which has been hard-hit by the coronavirus in the second wave. Two thousand soldiers were drafted in to assist with the pilot testing scheme (pictured)

WILL YOUR TOWN GET RAPID TESTS NEXT?

The Government has listed 67 which will be issued the tests in the following days, which are:

Stoke on Trent, Liverpool and Lancashire have already been provided with lateral flow tests before this week.

Speaking on Sky News this morning, Mr Hancock claimed 66 local authorities had already expressed interest in the mass-testing scheme. More are expected to sign up in the coming weeks.

He added: ‘I can confirm we are rolling out the sort of mass testing we are seeing in Liverpool, and indeed we earlier piloted in Stoke-on-Trent, across 66 local authorities.

Mr Hancock also said that mass testing, like a vaccine roll-out, would be across the UK not just England.

‘The same goes for mass testing, making sure we roll that out across the whole UK.’

Speaking to BBC Breakfast, Mr Hancock said the ‘much more versatile’ lateral flow tests would be rolled out in Nottinghamshire as well as ‘across Yorkshire, the West Midlands, other parts of the North West and the whole of the North East and other parts’.

It comes after the revelation last night that some 600,000 lateral flow test kits were to be issued to more than 50 directors of public health across England in the coming days.

An initial batch of 10,000 will be followed up with a weekly allocation of the tests, reaching the equivalent to 10 per cent of the population, the Government announced.

Local health leaders will be able to determine the allocation of the tests based on the needs of their communities, and it is hoped that the rollout will enable priority and high-risk groups to be tested on a weekly basis.

Discussions for Nottinghamshire to become the next region for mass coronavirus testing took place on Monday afternoon, according to reports.

Stoke on Trent and Lancashire were already provided with lateral flow tests before this week, the Government said.

London boroughs and the cities of Birmingham, Bristol, Manchester and Newcastle are among the places to be sent a bunch of tests from No10 this week.

Lateral flow tests have been available since Friday in Liverpool, where people who live and work there have been encouraged to get tested for Covid-19 even if they do not have symptoms.

A huge challenge of squashing the outbreak is to detect ‘silent carriers’ of the coronavirus so they can self-isolate before spreading the disease on further.

Queues built up outside the new test centres with people waiting around 45 minutes outside the Liverpool Tennis Centre before it opened. There are now 16 testing sites across the city.

Liverpool’s director of public health, Matt Ashton, said the mass testing was showing positive signs after thousands of people were tested on the first day of the pilot scheme.

The programme aims to test up to 50,000 people a day once fully operational, he added.

The city’s mayor, Joe Anderson, on Monday said around 162 people carrying the coronavirus had been detected through the scheme, who may otherwise not have been diagnosed.

Cases are collected by NHS Test and Trace and those with a positive result must self-isolate along with their household immediately for at least 10 days.

Last night Mr Johnson urged people in Liverpool to take part in the voluntary pilot scheme ‘for your friends, for your relatives, for your community’ in a bid to ‘drive the disease down’.

He told a Downing Street press conference on Monday: ‘Our first pilot began in Liverpool on Friday in partnership with Liverpool City Council.

‘We’ve tested thousands of people there, but there’s still a lot more to do. 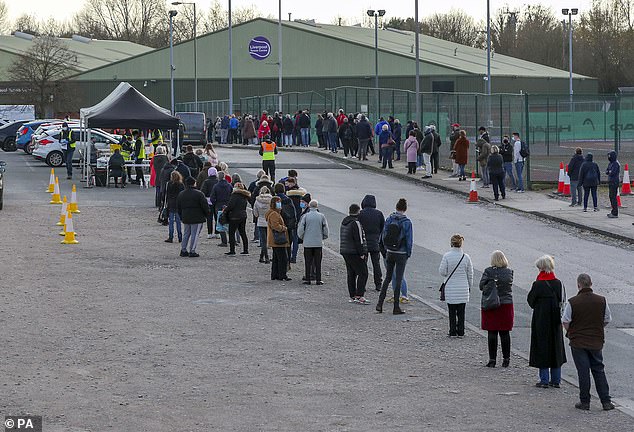 People queue at a coronavirus testing centre at the Liverpool Tennis Centre in Wavertree, part of the mass Covid-19 testing in Liverpool, Friday November 6 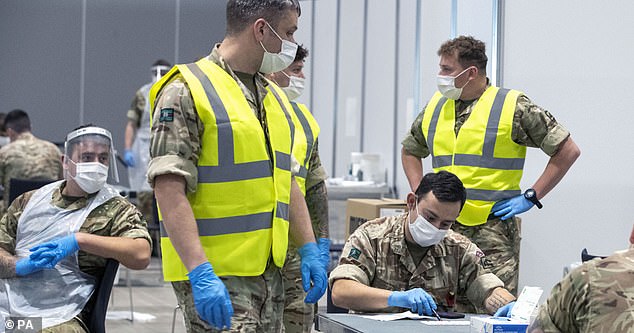 Soldiers at The Exhibition Centre in Liverpool, which is one of the testing centres part of the mass Covid-19 testing in Liverpool 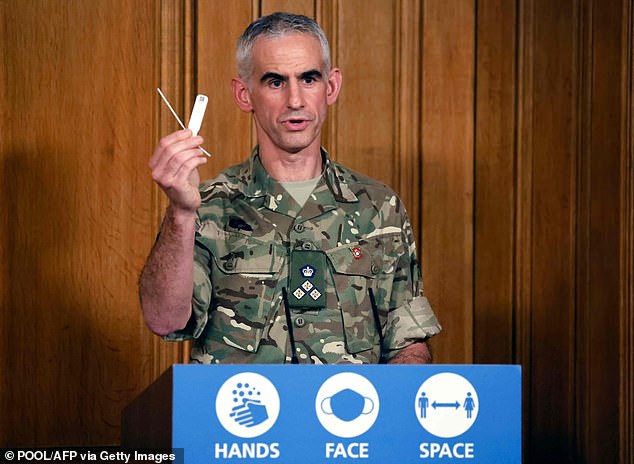 Brigadier Joe Fossey, who is coordinating mass testing in Liverpool, told the Downing Street press conference on Monday night: ‘What we are trialling now is a possible route out of lockdown and a way to get on with our lives’. He is holding a lateral flow test

Moonshot is seen as the only way out of the perpetual loosening and tightening of lockdown curbs without a viable vaccine.

‘So please, if you are in Liverpool, get yourself along to a testing centre – there are 19 at the moment with more still to come and the more people get tested, the better we can protect that great city and drive the disease down in Liverpool.

His comments were echoed by Brigadier Joe Fossey, who is coordinating mass testing in Liverpool.

He told the press conference: ‘What we are trialling now is a possible route out of lockdown and a way to get on with our lives.’

Two thousand soldiers were drafted in to assist with the pilot testing scheme of around 500,000 residents in Liverpool.

There have been serious doubts about how the scheme could be pulled off on a national scale if all towns and cities were to need the help of troops.

Using Liverpool as a reference – with 2,000 soldiers deployed per half a million residents – it would mean the UK would need to use 260,000 servicemen and women – more than three times the number of troops currently serving in the British Army (79,300), according to Statista.

But the pilot in Liverpool will only last for 10 days, suggesting soldiers will be moved around the UK depending on where the pop-up rapid testing is taking place.

Lateral flow tests, which work like pregnancy tests and give results in under an hour, will be used along with existing PCR swab tests.

Both work in ultimately the same way, amplifying genetic material then looking for signs of the virus.

But lateral flow devices have a lower specificity and sensitivity than PCR tests, meaning they aren’t as accurate at identifying true positive or negative coronavirus cases.

Lateral flow uses a different type of enzyme which allows the test to be done at one temperature, which makes it faster but less accurate.

PCR uses another type of enzyme and the process has to be repeated at different temperatures, which means it takes longer but is more accurate.

PCR tests must also be read by a lab technician, which slows the process of getting a result back.