A dog was shot dead and his owner was wounded after a masked gang chased a 27-year-old man through a residential street with a firearm.

Four men in a silver Ford Focus drove into the Brunswick Gardens estate in Cumbernauld, North Lanarkshire, at around 6.55pm on Thursday.

Three men wearing dark clothing and possibly balaclavas got out of the car, chased the 27-year-old man and a weapon was fired.

A 52-year-old woman was walking her dog nearby and suffered a minor injury to her hand, while the dog – a white Maltichon called Henry – was killed, police said.

The dog – a white Maltichon called Henry – died as a result of the firearm being discharged, police said

The man who was targeted was taken to Glasgow Royal Infirmary with serious but not life-threatening injuries to his back.

The car was found burnt out between Fannyside Mill and Forest Road near Blackthorn Roundabout, around 7.55pm.

Detective Chief Inspector Gillian Grant, senior investigating officer, said: ‘This was completely reckless and the fact this happened in a residential street shows the suspects had a complete disregard for the safety of the public.

‘A woman who was simply walking her dog has been left absolutely devastated.

‘There is an increased police presence in the area and reassurance patrols will be carried out. 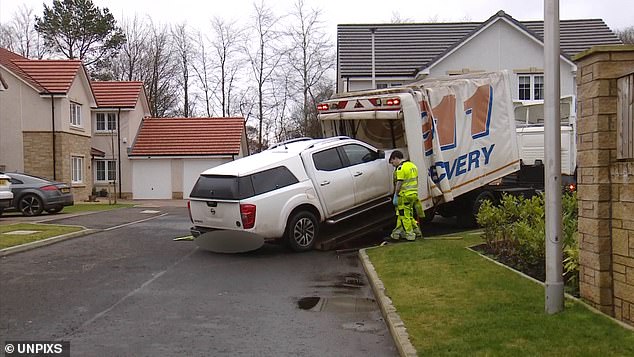 A car is taken away to be searched after a dog walker was injured and her pet shot dead in Brunswick Gardens, Cumbernauld Forensics teams search the area. The man who was targeted was taken to Glasgow Royal Infirmary with serious but not life-threatening injuries to his back

‘A team of detectives will be conducting CCTV and house-to-house inquiries.’

She added: ‘I would appeal to the public to contact us with any relevant information about this attack because this behaviour cannot be allowed to happen in our communities.

‘I would ask specifically if anyone witnessed the attack or saw a silver Ford Focus shortly before or after the incident to contact us.

‘Also, could I appeal to anyone driving in the Eastfield Road and Dullater Road area last night around 6.55pm to check dash cam footage and contact us.’