Mask rules descended further into chaos today as Grant Shapps backed London Mayor Sadiq Khan keeping them compulsory on the Tube, buses and taxis – even though they are not required on trains from ‘Freedom Day’.

However, the Transport Secretary played down the tensions this morning saying he had ‘expected’ operators to put in place ‘conditions of carriage’ to ensure that passengers were safe on public transport.

‘It’s not perfect. [It] would have been better if national rules applied across the country to avoid any confusion,’ he said.

‘The government for their own reasons have decided not to do that.’

Asked about the lack of restrictions on services from outside the city, Mr Khan said: ‘A number of services that come into London are not my responsibility. ‘If you are in London, you need to follow the rules.’ 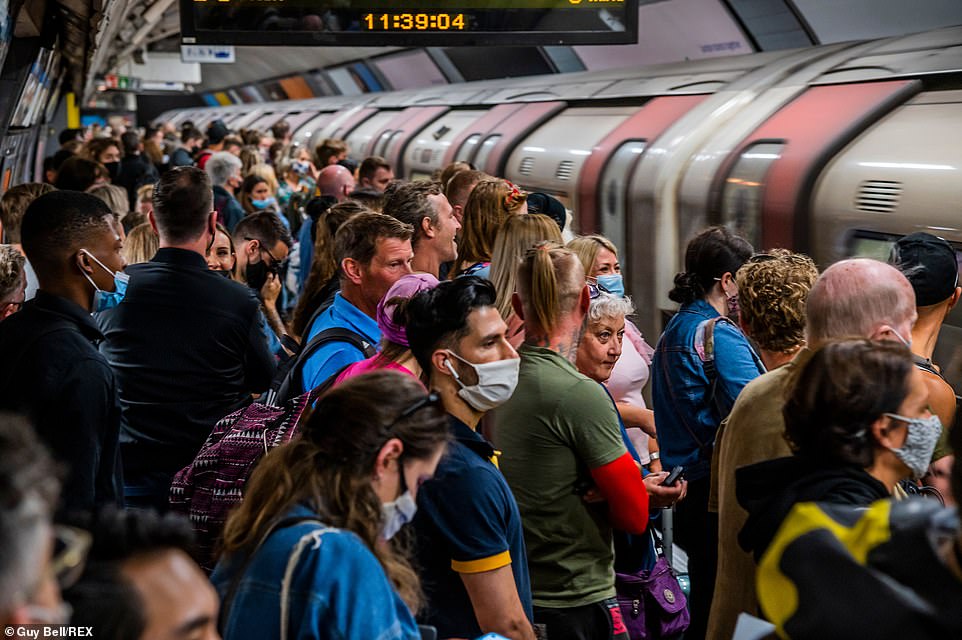 London Mayor Sadiq Khan has announced that masks will stay compulsory on the Tube, buses and taxis in the capital – even though they are not required on trains elsewhere from ‘Freedom Day’ 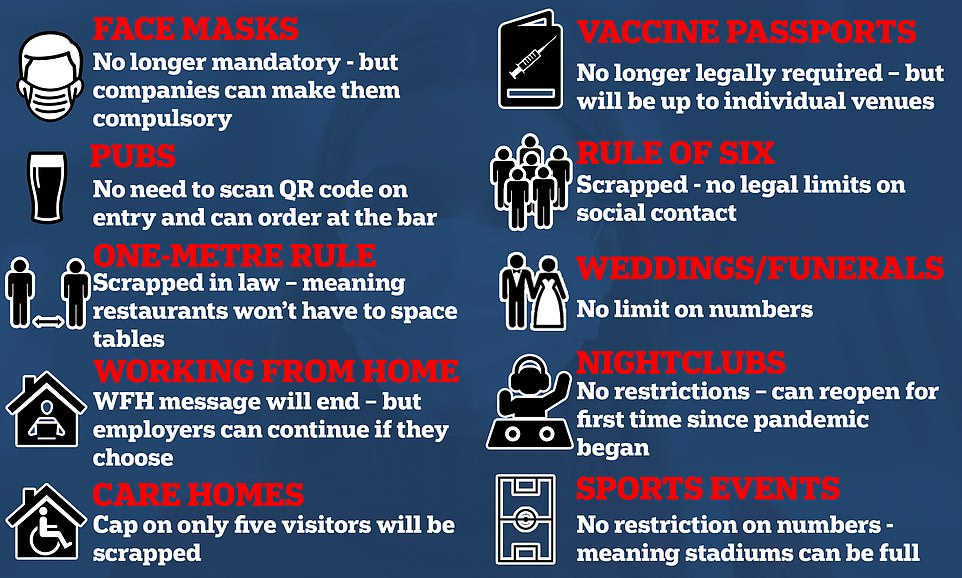 The coronavirus restrictions which will be removed from July 19 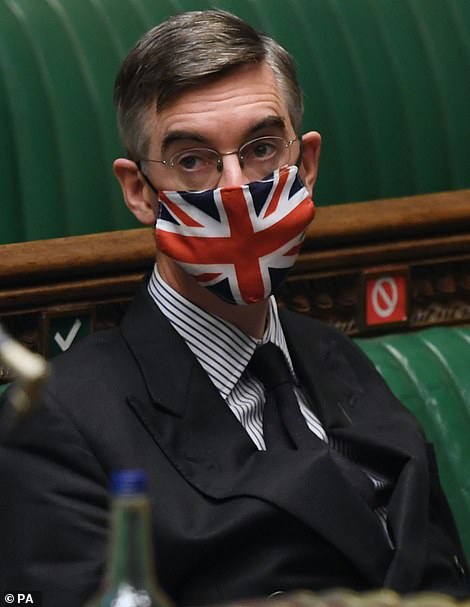 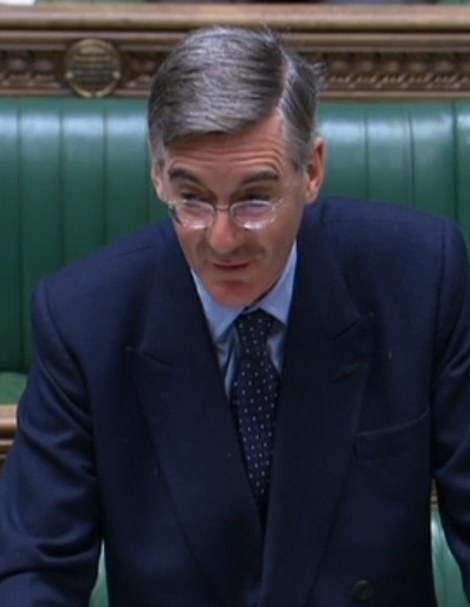 Mask on, mask off: Jacob Rees-Mogg (pictured left wearing a mask) says he will not be wearing a face covering at Parliament when the requirement is lifted (pictured right on July 12)

A union representing civil servants said it plans to ‘name and shame’ MPs who refuse to wear face coverings in Parliament once legal requirements are dropped next week.

FDA general secretary Dave Penman said he would be writing to MPs warning them that his union was willing to ‘call out’ those ditching their masks, even after coronavirus-related restrictions have been lifted on July 19.

The Prime Minister has announced that from Monday, legal mandates in England to wear masks in some public settings will be scrapped, with the onus instead placed on personal responsibility.

House of Commons Speaker Sir Lindsay Hoyle has written to MPs explaining that they will be ‘encouraged’ to continue wearing the coverings until July 22, when Parliament breaks for its summer recess.

However, the elected politicians cannot be forced to continue using them while in the chamber or elsewhere.

Currently, MPs who are not exempt must have their face covering on when not speaking in a debate in the Commons, while it is also recommended that they are adorned when moving about the estate.

But, with all other staff on the Westminster estate to continue to be required to wear masks while moving around the premises after July 19, the FDA said it will be putting pressure on MPs to follow suit.

In his own round of interviews this morning, Mr Shapps said: ‘Whilst we are going from this being a legal requirement to guidelines, we do expect individual carriers to make sure they are putting in place whatever is appropriate for their network,’ he told Sky News.

‘The airlines have already said that you will need to carry on wearing masks on those. It is very much in line with what we expected – indeed wanted – to happen.’

He added on Times Radio: ‘If you think about it, it makes sense..

‘We’ve moved from the point in the crisis where everything is set in law to a point where we put in place a degree of a personal responsibility and also ask the carriers in this case – the transport carriers – to make clear the conditions of travel on their particular network.’

Masks will also remain compulsory in Scotland and Wales, but transport operators in the rest of the country have indicated they will not insist on passengers wearing them.

RMT general secretary Mick Lynch said: ‘We now have the ludicrous position where a passenger travelling through London will have different rules on the tube and the main line services.

‘There will also be a change of policy on trains at the Welsh and Scottish borders which is a total nonsense, and will leave staff right at the sharp end and dangerously exposed when it comes to enforcement.

‘As a result of this chaotic approach we now have a situation where the London measures are not enforceable by law, which means RMT members will be thrown into a hostile and confrontational situation from next Monday at heightened risk of abuse and assault.’

Mr Khan’s move came as ministers clashed with government scientists over the decision to ditch mask laws next week.

Meanwhile, Commons leader Jacob Rees-Mogg added to the mixed messages by saying he would not wear one in Parliament when the requirement is lifted.

Mr Rees-Mogg said that people who have received both jabs of the vaccine have already done their ‘societal bit.’

‘This morning I wandered around the palace of Westminster wearing a mask, and met almost nobody. In those circumstances I will not be wearing a mask – what would be the point?,’ he said while speaking on the Conservative Home Podcast.

‘If you’ve had both vaccines, your risk of transmitting the disease is slight. So in a way you’ve done your societal bit by having the vaccine, as much as by wearing a mask, which is why I think it’s sensibly individual choice.’

His comments come amid mass confusion among businesses about whether or not to enforce their own voluntary mask-wearing policies when restrictions are lifted on July 19.

Bosses last night demanded clarity on whether such policies would be legal.

Some chains have already suggested they may bring in mask-wearing requirements for customers beyond July 19 – with some fearing a ‘Freedom Day free-for-all’ when the Government lifts Covid restrictions on Monday. 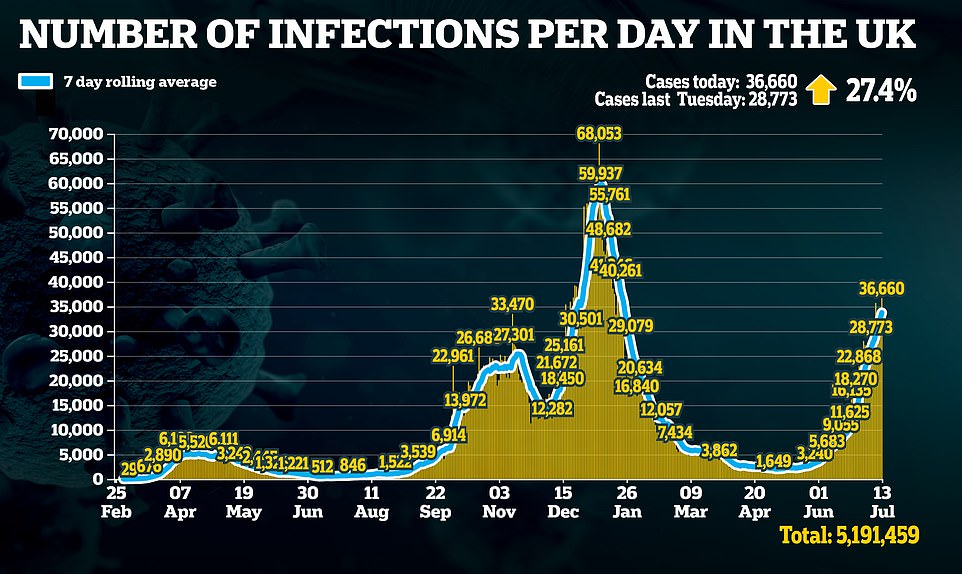 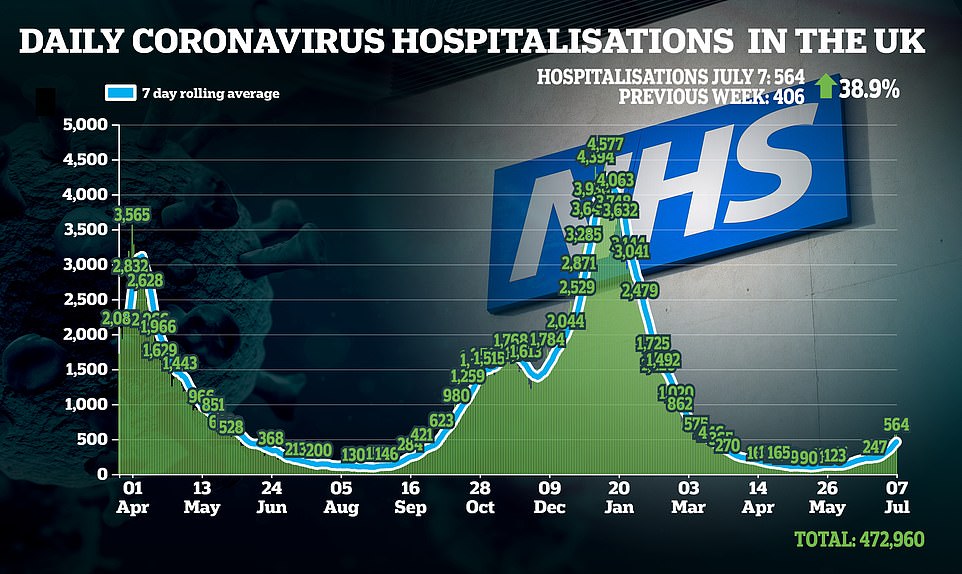 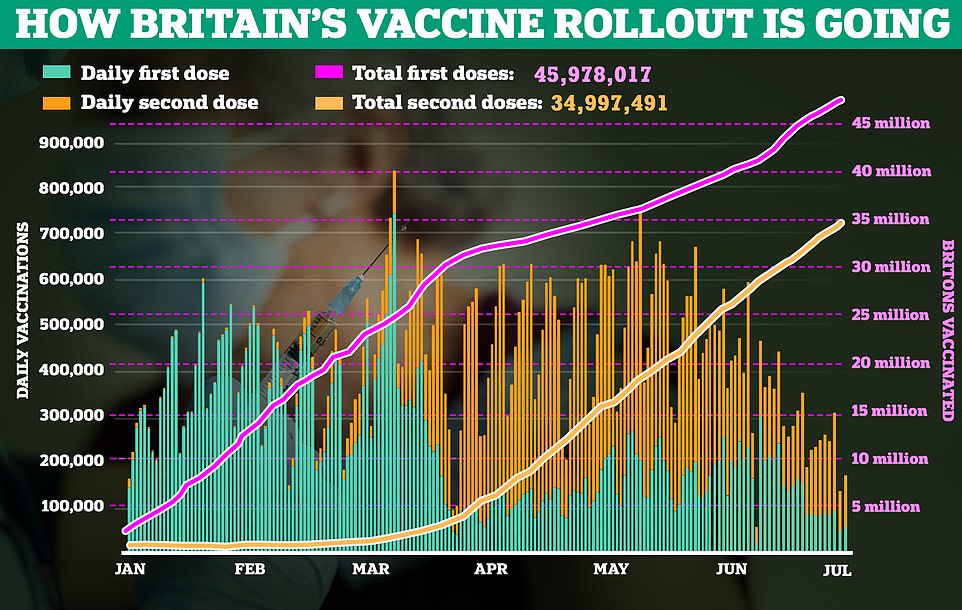