EXPRESS INFORMER > Sports > MARTIN SAMUEL: Team USA is better than golf so they should win… if only it were that simple

On the shores of Lake Michigan, rumours abound of a fabulous guest appearance come the weekend. His management group continue to deny his imminent arrival, but there remains speculation a stricken Tiger Woods may fly in to give one last fillip to the American team. At the very least, he will make a morale-boosting Zoom call.

It seems a rather stereotypical play from the hosts. Team America turning again to the greatest individual golfer of this generation for inspiration.

Not the greatest Ryder Cup golfer, mind. Woods’ record in the Ryder Cup player reads won 13, lost 21, halved 3. In many ways, it encapsulates where America goes wrong. Woods as a lone competitor is 4-2-2 but the Ryder Cup is about more than outstanding individuals. 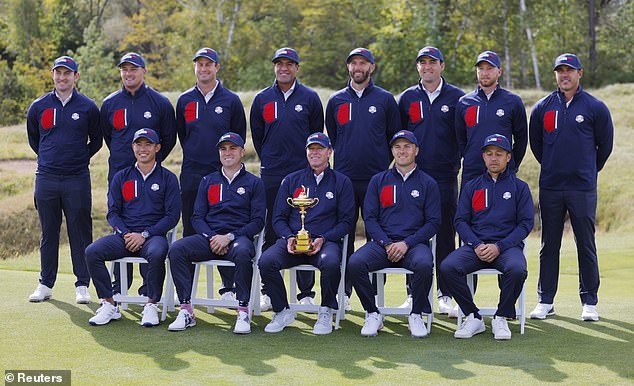 If it was merely won by the best golfers, America’s run against Europe would be similar to their record against Great Britain and Ireland when expansion became necessary. It is no different here in Wisconsin.

Statistically, this is the strongest American team since world rankings began in 1986, with an average player position of 8.9. Against that, Europe have a single player, Jon Rahm, inside the world’s top 10. Ian Poulter is 50, Bernd Wiesberger 63.

So America win? Yes, thinking logically. Yet in 2002, for instance, Phillip Price — ranked 119 in the world at the time — beat world No 2 Phil Mickelson 3&2 on the final day. The competition is full of mysteries like that.

Thorbjorn Olesen annihilating Jordan Spieth in 2018, Stephen Gallacher overwhelming Mickelson again in 2014. So when Brooks Koepka defiantly made the case for America, he did so with reasoning that has proved unreliable on so many occasions in the past. America win, because they are better at golf.

‘A lot of guys are playing well,’ said Koepka. ‘Patrick Cantlay has been playing really well, Daniel Berger, Jordan Spieth’s playing great. Someone has to win and someone has to lose and I guess it’s just who plays better.

‘It comes down to the eight guys you send out every day. Will they play to the best of their ability? If they do, that side is going to win.’

And if that sounds simple, it’s because it is. Yet if favourites never lost there would be no bookmakers. It is Europe’s ability to be more than the sum of their parts that makes the Ryder Cup so intriguing. As a team, America seem to be striving for a compatibility and ease that Europe delivers comfortably. 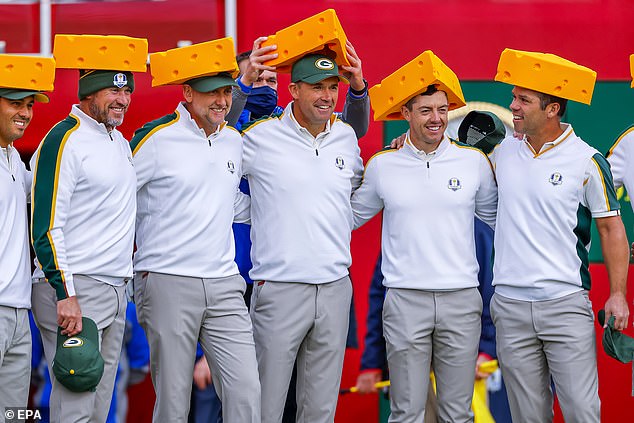 How did America not tap into Europe’s foam cheese-hats crowd-pleasing gimmick?

Take this week’s cheese-hats. How did America not tap into such an obviously crowd-pleasing gimmick? Fans of the local NFL team Green Bay Packers wear hats shaped like triangles of cheese — Wisconsin is the Cheese State, famed for its dairy produce — and Europe walked on to the practice tee wearing them on Wednesday, then threw them to the cheering crowd.

This was, incredibly, the brainchild of captain Padraig Harrington and not some marketing guru. And nobody at the US PGA thought of manufacturing stars and stripes cheese-hats, for PR or merchandise purposes?

Now, no team wins the Ryder Cup through the astute use of novelty head gear. Koepka is right, hitting fairways and greens is of far greater use. Yet Europe gets match play and team golf in a way America does not.

Koepka called this competition ‘different’ in a fascinating interview with Golf Digest and while he now says his comments were interpreted negatively, what came across was a degree of irritation with team meetings and other impingements on the cult of the individual.

It was bubbling beneath the surface on Thursday, too. Praising US captain Steve Stricker for reducing the commitments on the players, Koepka still spoke like a man who would prefer more down time. ‘It’s a busy week,’ he said. ‘We have a lot of things. I don’t bring my physio just because I know I don’t have time for it.’ 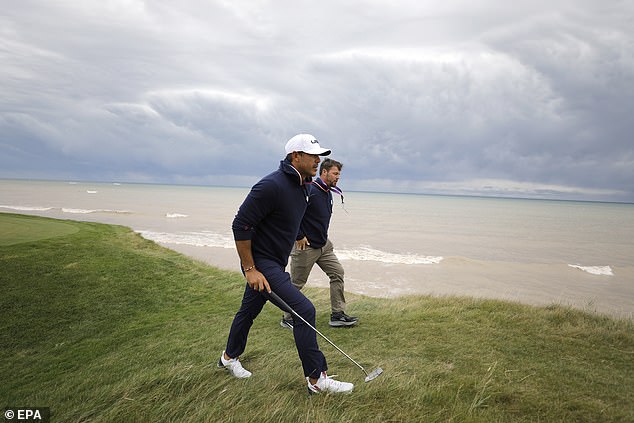 He was asked about the ping-pong table, that seems to have a mystical hold over those looking for signs of American unity. ‘I haven’t played any ping-pong,’ Koepka added. ‘I haven’t been in the team room. Just chilling too much. I know the obligations are cut down but I’ve still got long days.’ Could be a tough gig for Tiger, that.

Against this, of course, is that at Hazeltine in 2016, and Valhalla in 2008, the United States were considered the better team, and the better team won. If they win here it will be three triumphs from four in recent Ryder Cups on American soil. It may also be an ominous portent given the relative youth of this team.

Tony Finau offered greater hope for those who have invested in the favourites — and 80 per cent of betting revenue, even in the United Kingdom, is going on America. Finau spoke of what America has needed for some time now, a narrative change, a generation that do not arrive at the tournament bearing the wounds of past humiliations.

‘In 2018, I was one of the younger guys and now just a short three years later, I’m the third oldest on the team,’ said Finau. ‘I think it tells you where American golf is headed. 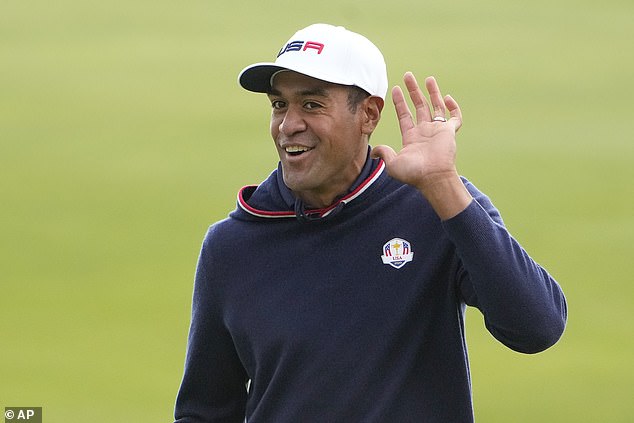 ‘We have so much great young talent and a handful of it is on our team already. It’s really exciting and our goal is not only to change the mould but the history of the Ryder Cup and for many Ryder Cups to come.

‘For me, this is a chance for a change of culture. We have a whole new team. We have a team with no scar tissue. There’s only a handful of us that have even played in a Ryder Cup, and the few of those, we have winning records.

‘So we actually don’t have guys on our team that have lost a lot. So this is a big one because we’ve got a whole new team, a different group of young guys that are hungry. You guys see six rookies. Man, in this team room, I don’t see any. I see six guys that are confident and none of us are wide-eyed. I see guys beaming with confidence and that’s refreshing. The culture of American golf is changing. 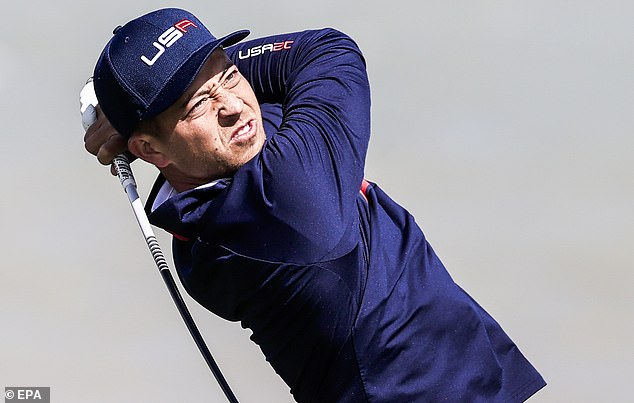 This is the youngest team we have ever had by a long shot. We have had some publicity about Americans not possessing the camaraderie of the Europeans, or not sharing the interest in playing in the Ryder Cup. That’s not the case. That’s the mould we want to change going forward. That’s why this is the big one.’

No mention of ping-pong there, you may note. No mention of ailing 15-time major champions. America intend making golf a very simple game across the next three days: play better, play hungry, win.

Europe will continue hoping that there is more to the challenge of match play than the skill-set that delivers on the US Tour most weeks. ‘Yeah, maybe there is a little bit more to it,’ conceded Koepka. ‘But I don’t think it’s too much. You know, someone’s got to lose, man. 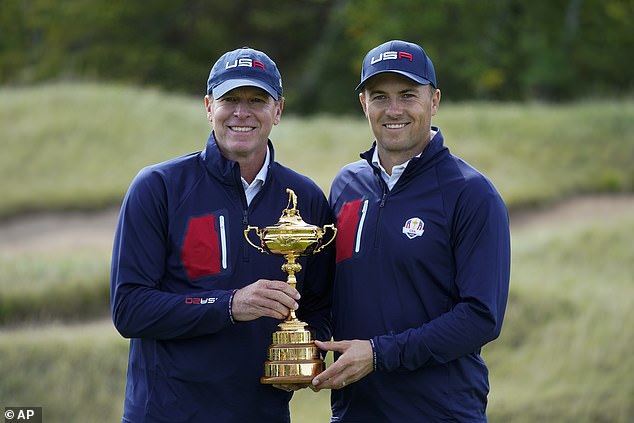 USA, captained by Steve Stricker (L) and with the likes of Jordan Spieth playing, are favourites

‘You get a bunch of guys that play better than the other guys — there’s your winner.’

He made it sound the easiest thing in the world. Of course, if it was, Team America would not need Tiger, ping-pong or cultural change.