EXPRESS INFORMER > Sports > MARTIN SAMUEL: Jimmy Greaves was one of football’s great goalscorers and an even better man

A lot will be written, and said, about Jimmy Greaves the footballer in the coming days. You will have heard much of it already.

The comparisons with Lionel Messi, the numbers, the records and milestones that are still being pursued today, or usurped only by the greatest of the great.

You may already have been moved to seek out highlights of goals scored in torrents, or the performance against Manchester United in 1965 that so exquisitely captures his brilliance. 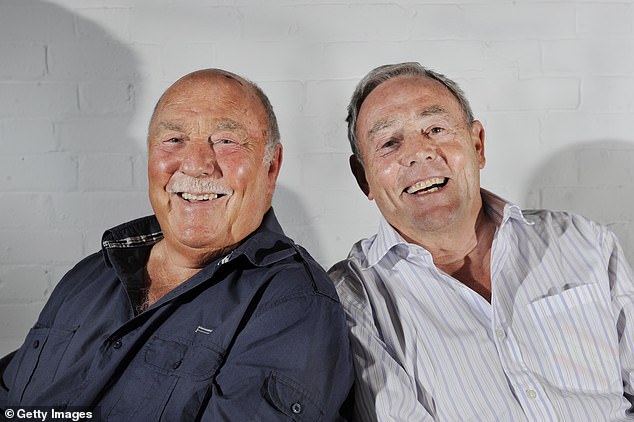 Greaves, the player, was an exceptional individual. But Greaves, the man, was even greater

There are a number of wonderful players on that pitch, but Greaves is playing a different game to everybody in his orbit.

And all of this adulation is true, and relevant; to us, at least. There are very many fine judges who will maintain that Greaves is the most natural goalscorer they have ever seen. And statistically, he is without doubt the best of British.

The first act of his life, well that was Jimmy exploiting a gift so natural it burst on to the scene shaped by no instruction more technically specific than a parting wish of ‘all the best’ from his Chelsea manager, Ted Drake, before matches.

Yet what followed was the real triumph. The journey back from the abyss of alcoholism, the forging of a career as a broadcaster, a writer, a speaker, of a second life, without bitterness, regret or ego.

It is only now, he says, that he is beginning to appreciate that he was in a band, not with his friend John, but with the John Lennon. However, the 81-year-old also became an accomplished broadcaster, writer and speaker

And, in the same way, ‘Greavsie’ never got to see Jimmy Greaves play. Never got to marvel at his speed, his poise, the cleanness of his finishing, his precision, his artistry.

Maybe that is why he was so nonchalant about it, so generous yet endearingly bemused that people would want to share memories of what he did half a century ago, and what it meant to them.

‘A retired welder never gets asked about a bracket they made,’ he would say, ‘But people want to talk to me about something I did in 1962 all the time.’

His favourite was a chap who approached him at a function where he was guest speaker. ‘Remember me?’ he asked. Jimmy had to admit he didn’t.

The chap proceeded to recall in great detail a hat-trick Greaves had scored as a dashing young man, decades past.

Jim was happy to have his memory jogged — sadly, even before his stroke, he maintained he couldn’t remember what it was like to be good at football — but was still struggling to place where his new friend fitted into this story.

Was he on the other team? Finally, all was revealed. ‘I’m surprised you don’t remember me,’ the chap announced, proudly. ‘I was behind the goal.’

Time spent in Jimmy’s company was full of charming interludes like that. ‘People are always coming up to me — ‘Jim, can you remember that goal against West Brom in 1968?’ and I say, ‘No.’ 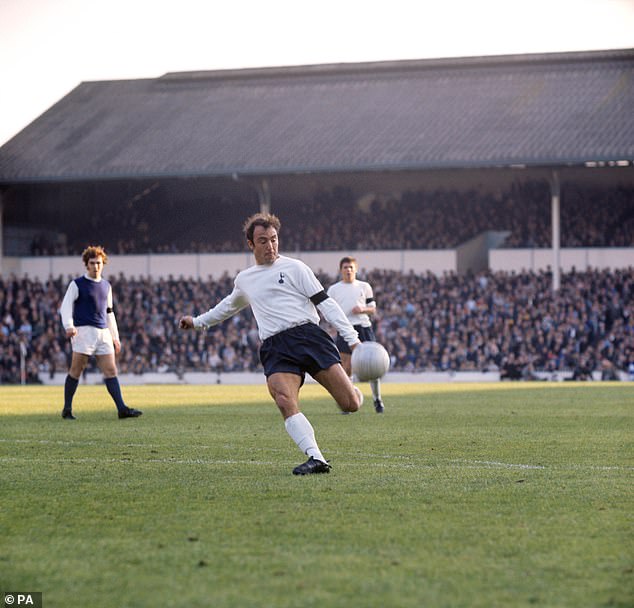 ‘But that’s all right because they only want to tell you about what happened to them anyway.

‘Well you had the ball on the halfway line, and I remember that because I was with Charlie and we’d just got two pies…’.

‘And it turns out the real story is about Charlie dropping his pie and what you did wasn’t all that important anyway. And I prefer that, really.’ And he genuinely did.

Recovery from alcoholism finds no time for ego and self-importance and Jimmy did it the hard way, through meetings in central London amid addicts sleeping rough. It afforded him no time for self-indulgence.

‘If they can stay sober, so can I,’ he would insist, and he did. His last drink was February 1978. But Jimmy never wanted it to be about him.

He was a recovered alcoholic strong enough to keep wine in the fridge at his place in La Manga for family, friends and guests because, while he couldn’t indulge, it didn’t mean that nobody else could.

Ghostwriters of his columns — and I had that privilege for a few years, and the pleasure, Jim, was all mine — were always treated as equals, not secretaries.

He was as selfish as any great striker must be on the pitch but a team player once the ball was put away.

When he was taken ill for two days, Jimmy had no problem at all with his place in the TV-am studio being filled by his Spitting Image puppet. 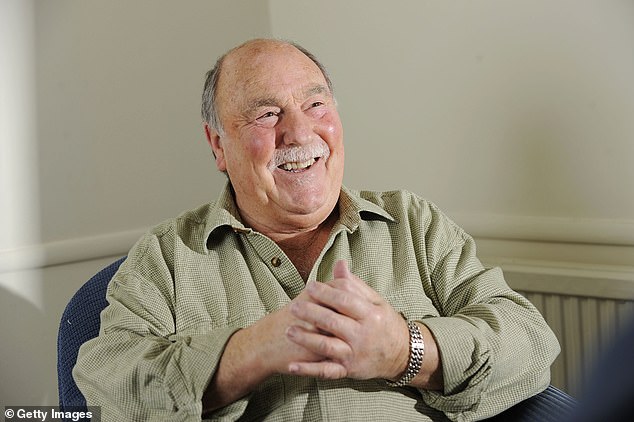 This newspaper ran a campaign to get him a knighthood but the drive for such an honour would never have come from Jim. Nor did the push to award him a World Cup winners’ medal. Why would Greaves want a belated memento of a day of crushing disappointment?

It would have been rude to refuse when the FA lobbied so hard with FIFA but Jimmy’s only motivation for attending the presentation ceremony at Wembley was to catch up with old friends again. Later, Jimmy proved how much he cared for that medal. He sold it for £44,000.

If he could, Jimmy always avoided nostalgic celebrations. Asked to be a guest of honour at a match between Tottenham and Chelsea some years ago, he said a polite no. Too much fuss, too much ceremony, too much hoopla.

He preferred to watch the Six Nations match, England versus Ireland, at home with a pot of tea. Ultimately, towards the end, he made no secret of preferring rugby union and the subtleties of a good Test match, to football.

He didn’t even come from a football family. His father played hockey with the army in India and Jimmy could derive as much pleasure from talking about his rally driving experiences. He had great stamina behind the wheel of a car.

He hated flying and could reach his place in La Manga, Spain, from Essex, in a day. When I did it, as his guest, after the European Championship in 1996, it took me three.

It is often suggested Jimmy didn’t love football, but that isn’t true. He loved playing the game, the physical act, but not what surrounded it. 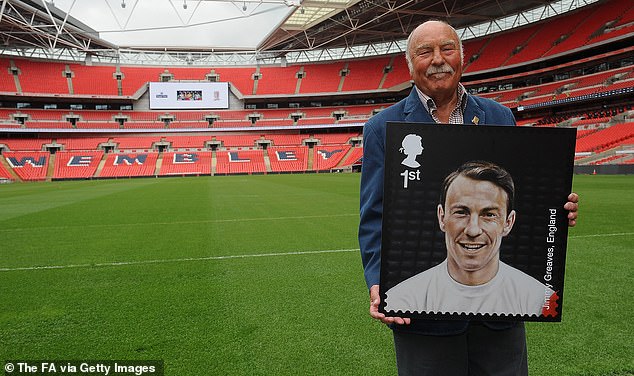 ‘I’m not sure I even wanted to be a professional as a kid,’ he told me. ‘I just liked playing. I woke up and wanted to play for 12 hours a day. And that never changed.

‘I used to go to a tennis club that was owned by the Co-op. They had a Sunday football team and we would take on the Met Police or local company teams.

‘I used to turn out for them and we’d have Bobby Moore and Geoff Hurst on the line, waiting to come on. And we were all still playing.

‘We just fancied a match and a pint in the bar afterwards. That was what it was like. Players played for the fun of it.’

He enjoyed talking about it, too, when that was his job. He had an unforced wit, an easy charm and worked damn hard at the elements of broadcasting that needed to be mastered. It wasn’t always bright and breezy fare, either.

At the 1994 World Cup when Diego Maradona failed a drugs test and was banned in disgrace, the easy commentary was the rotten cheat, Hand of God, pile-on.

Instead, Jimmy filed a counter-intuitively sympathetic piece focusing on the fearful kickings Maradona received at the peak of his career, and how injury set him on a path where addictive pain-killing drugs, and other medication, became part of his life.

It was brave, it was true and, today, the rest of the world has caught up. Jimmy’s insights into some of football’s most tragic heroes — George Best, Brian Clough, Paul Gascoigne — was always clear-eyed and perceptive. He was so much more than the class clown. 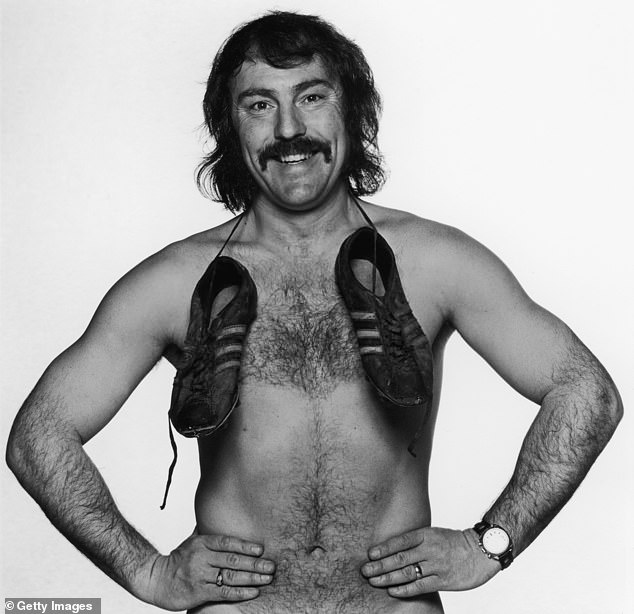 ‘Everyone listens when a funny man talks seriously,’ he would observe, and that is true, too. He didn’t love the direction football had taken, and said so.

A generation shared his disdain, his aversions to arrogant finger-to-lip celebrations, the humourlessness, the petulance, the squeals. He came from a era when players rode tackles from Ron Harris and more besides.

A favourite story was of John Sillett, his friend and Chelsea’s left back. He’d endured a particularly difficult game, culminating in an own goal.

Sillett took his time leaving, letting the crowd go. He waited until it was dark, pulled his overcoat up and headed to the bus stop.

Standing there waiting, were a few fans, still raging about his performance without realising he was now beside them.

‘What did you do?’ asked Jim. ‘I didn’t want to take any chances,’ Sillett replied. ‘So I joined in.’

When I left the newspaper and another lucky, young journalist inherited Jimmy’s column — and it is no coincidence that he speaks as highly of Jimmy as I do, as does the writer who succeeded him — those were the conversations I missed.

Hours spent talking about football now, and then, stories, insights, much of which never made it into print.

Jimmy was a natural. One year, he told me, he sold up and moved to Cornwall. He’d been on holiday there many times, loved it, and was working for Central Television. 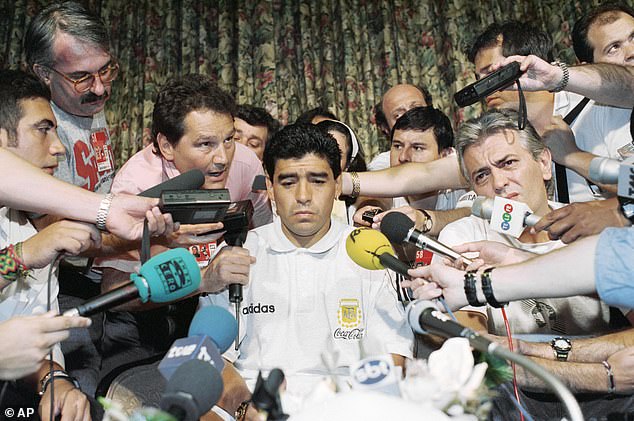 He thought the commute up the M5 would be straightforward but had reckoned without the holidaymakers. By the end of August, the new home was sold and the family back in Essex.

‘I didn’t move house,’ he said. ‘I just took a summer holiday with my furniture.’ Who needs a ghost with lines like that?

The last time I interviewed Jimmy he was preparing for a one-night show at the O2 Arena. It was before the stroke that blighted the final years of his life, obviously.

He joked that he had to check with his agent whether this was the farewell tour, or the comeback: ‘We alternate them every year.’ At his age, one day, it was always going to be the farewell.

Even so, it seems too soon. Those numbers, of course, will live on. But, for those fortunate enough to know him, those numbers weren’t even the half of it.