Marta Bassino won her second straight World Cup giant slalom of the season on Saturday in Courchevel, France, and Mikaela Shiffrin placed fourth in her return to the event after an 11-month gap.

Bassino produced the fastest second-run time after trailing world champion Petra Vlhova the first time down in the morning.

The Italian racer finished 0.46 ahead of hard-charging Sara Hector, and 0.59 clear of Vlhova whose three-race winning streak was ended.

Val Grenier of St. Isidore, Ont., was 13th among 25 finishers following the cancellation of two super-G races last weekend in St. Moritz, Switzerland. She stopped the clock in one minute 12.79 seconds on her second run for a two-run time of 2:23.86. 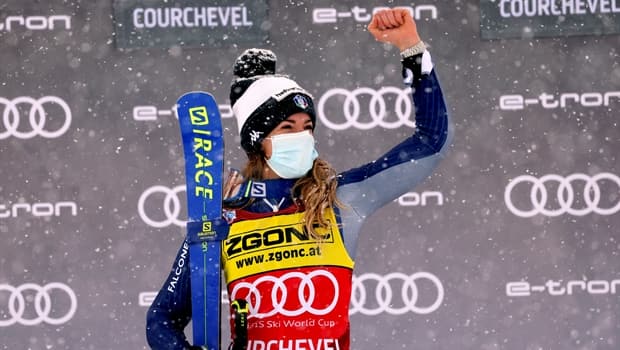 Grenier was the top Canadian in 25th in mid-October at the season-opening women’s World Cup giant slalom in Soelden, Austria.

Toronto’s Ali Nullmeyer and Candace Crawford, and Mikaela Tommy of Wakefield, Que., did not qualify.

Shiffrin had been third-fastest in the morning and was again quick in the top sections before losing time in the lower part of a course slowed by steady falling snow. She finished 1.70 behind Bassino.

The American star skied straight out of the finish area without looking back at the big screen broadcasting her run. There were no fans at the race in the upscale French Alps resort.

Shiffrin, the 2018 Olympic champion in giant slalom, last raced the event in the World Cup in January. That was just before the death of her father and the spreading coronavirus pandemic which ended the season early.

A back injury forced her to skip the season-opening giant slalom won by Bassino at Soelden, Austria, in October.

Vlhova won all three races since — two slaloms at Levi, Finland, where Shiffrin returned to competition, and a parallel racing event at Lech, Austria.

A second giant slalom is scheduled Sunday at Courchevel, where Shiffrin won in 2017 and 2018.