Paving stone specialist Marshalls has issued a profit warning as the cost of living crisis forces households to cut back on landscape projects.

The company, which benefited from homeowners upgrading their gardens and driveways during the pandemic, said it has seen a ‘marked’ softening in demand in recent months.

It joins a raft of other building merchants, from Travis Perkins to Leyland’s owner Grafton, warning that business has slowed.

Demand for paving, kerbs and other landscape projects tumbled in recent months

The West Yorkshire company said its landscape division continued to face ‘tough’ trading conditions, with revenues falling 6 per cent to £311million since the start of the year.

The drop in demand accelerated sharply in the last three months as households reined in their spending on outdoor projects.

Sales in the last quarter fell 16 per cent compared to the same period last year – much faster than the 1 per cent fall in the first quarter.

Marshalls responded to the fall in demand by reducing their manufacturing output, which it says will help it to reduce operating costs by around £10million per year from the start of 2023.

For now, however, it expects the fall in demand to impact profit, which is set to come in slightly below the bottom end of the current range of market expectations of between £95million to £101million.

That’s despite trading at its building products division, which produces a range of building supplies from bricks to drainage, remaining robust.

Revenues from the division rose 22 per cent to £149million in the nine-month period, with particularly strong growth at its bricks and masonry arm.

Marley Group, its recently acquired manufacturer of pitched roof systems, saw 9 per cent rise in revenues to £84million, but, while continuing to perform ahead of its expectations, growth has moderated.

Overall, group revenue in the nine months to the end of September rose by 20 per cent to £544million. When excluding Marley, growth was 4 per cent.

Marshalls shares tumbled 18.4 per cent to 246.5p in morning trading on Friday. They have fallen by 65 per cent over the past year. 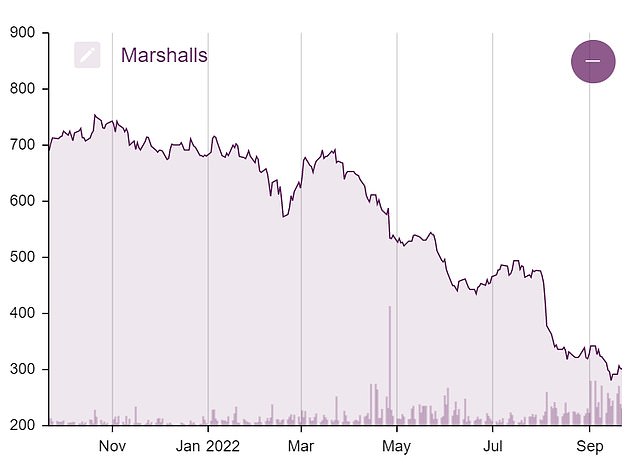 Marshalls shares have fallen by around 65% over the past year

The group supplies products for outdoor spaces for both residential and commercial projects.

Commercial projects in the past have included a new look for New Bond Street in London, public benches and even motorway drainage.

But households are cutting back on superfluous expenses as they face a squeeze on finances from surging inflation.

Meanwhile, the housing market is showing further signs of a slowdown amid rising mortgage rates, with the latest report by Halifax showing house prices fell 0.1 per cent in September.

This summer, builders’ merchant Travis Perkins issued a thinly veiled profit warning, while Leyland owner Grafton warned that demand had dropped back from ‘exceptional’ levels seen during the pandemic.

Russ Mould, investment director at AJ Bell, said it was not difficult to understand why many households may decide not to splash thousands of pounds to get their front drive spruced up in the current times.

‘In recent years there has been a trend for households to dig up the front garden and replace the weeds with paving stones, so they can park their car and not worry about traffic wardens,’ he said.

‘As a paving stone specialist, Marshalls enjoyed booming sales, also helped by plenty of activity among its corporate customers. Part of this sales momentum has now disappeared.

‘Its landscaping products business is heavily exposed to repair, maintenance and improvement trends in the private housing market, and demand is dropping.’