By Jack Elsom and Katie Weston For Mailonline

Christmas adverts will be scaled back this year as firms feeling the strain of the pandemic are projected to slash marketing budgets by £725million.

The annual blitz of festive promotions is set to be more muted as hard-hit retailers cut costs and brace for a slump in sales.

Marks and Spencer has already scrapped its Christmas clothing adverts and have instead turned to online influencers to showcase their products.

Advertising spend in the fourth so-called Golden Quarter is expected to sag by 10.5 per cent to £6.2billion, according to the Advertising Association and Warc.

Looming lockdowns to tackle a resurgent virus has been blamed on the fall in advertising spend as retailers face reduced demand because of restrictions.

Advertising spend in the fourth so-called Golden Quarter is expected to sag by 10.5 per cent to £6.2billion, according to the Advertising Association and Warc 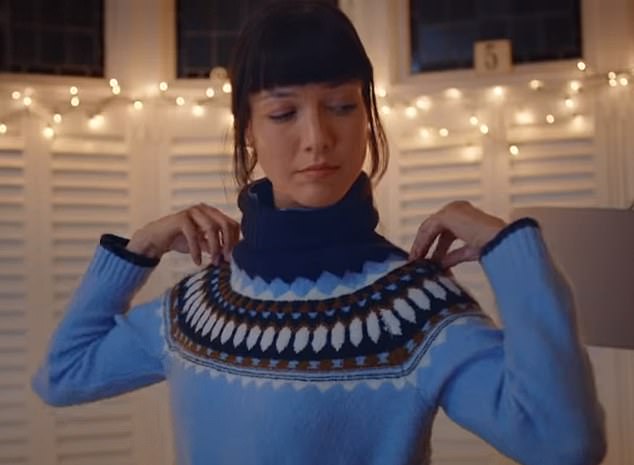 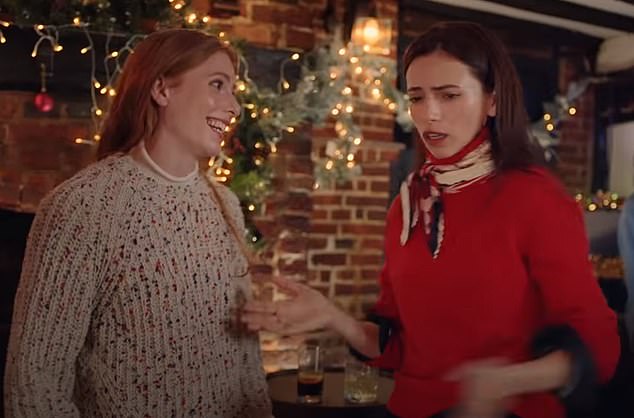 Traditional TV ads will concentrate solely on food this year instead, with the first to appear in the coming weeks (pictured: two people wearing jumpers in the company’s 2019 clothing ad)

Cinema advertising is forecast to suffer the biggest slump of 66 per cent as the movie industry remains especially bruised by restrictions which closed cinemas and saw filming halted.

Radio advert spending will drop by 13 per cent, direct mail 12 per cent and TV 2 per cent, the AA predicts.

The analysis revealed total UK adspend is set to plunge 14.5 per cent this year to £21.5billion.

Stephen Woodford, chief executive of the AA, said: ‘These stark figures demonstrate the strain that all parts of the advertising ecosystem were under during the second quarter.

‘Large parts of our industry and the wider economy were effectively shut down.’

M&S traditional Christmas TV ads will concentrate solely on food this year instead, with the first to appear in the coming weeks.

The retailer is still planning to use influencers on social media to market clothing and homeware in the hope customers will shop online in the event of a lockdown over Christmas, according to Campaign. 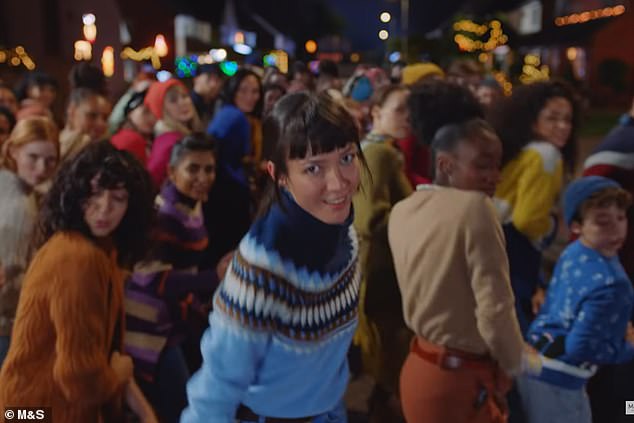 Last year the company’s Christmas ads for clothing, ‘Go Jumpers for Christmas!’ featured hip hop dancers in the store’s jumpers and pyjamas (pictured), with sales initially rising as a result

Sales for jumpers and pyjamas rose as a result but figures later showed that, overall, sales of clothing and homeware in the last three months of 2019 fell by 1.7 per cent.

It follows the onset of the Covid crisis, with more customers working from home, meaning demand for work-related wear has fallen since.

M&S announced in August that it is axing 7,000 jobs, with the bulk of cuts being made across its stores, hitting around 12 per cent of its 60,000 shop-based staff.

Regarding its last set of financial figures, retail analyst Natalie Berg, of NBK Retail, said of M&S clothing: ‘In trying to be everything to everyone they’ve ended up being nothing to no one.’

Christmas has been thrown into chaos by Covid-19 measures which limit gatherings to six people and in Tiers 2 and 3 restrict two households from meeting indoors.

Retailers fear that gift-buying could take a massive hit as there is less travel to loved-ones homes during the festive period.

Yet Richard Lim, chief executive of Retail Economics, mooted a potential spending spree and told MailOnline that affluent families that have foregone holidays could be gearing up to threat themselves this Christmas.