Wizz Air was one of the biggest risers in the FTSE 250 after shrugging off the Omicron variant and the war in Ukraine to upgrade its forecasts.

The budget airline surged as much as 7.8 per cent, or 224p, to 3116p after revealing that it was preparing to ramp up its operations and crew numbers in preparation for ‘a busy summer’.

Between April and June, it expected to fly with 30 per cent more capacity than the same period in 2019, and 40 per cent more across the peak summer period from July to September.

Steep ascent: Wizz Air surged as much as 7.8% after revealing that it was preparing to ramp up its operations and crew numbers in preparation for ‘a busy summer’

Wizz also forecast a loss for the three months to the end of March of between £158million and £174million, lower than previously predicted.

While its flights to and from Russia, Ukraine and Moldova remained suspended, the company said it had managed to reallocate the spare capacity to other parts of Europe.

Wizz Air’s predictions of strong demand followed similar trends from rivals Ryanair and Easyjet (up 3.2 per cent, or 18p, to 574.2p), both of whom also flagged sharp increases in bookings as pandemic travel restrictions were relaxed and fears of the Omicron variant of Covid-19 receded.

Despite the share price surge, Wizz stock remains around a quarter below its value at the start of the year as surging oil prices and the outbreak of the war in Ukraine rattled investors.

He added: ‘Despite these developments we are starting to see recovery take shape as we move closer to the summer of 2022.’ 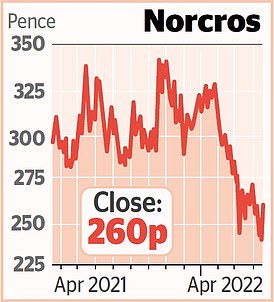 Shares in Norcros rose after the shower, tap and tile maker upgraded its forecasts.

Trading for the year to the end of March had been ahead of expectations and it had acted ‘decisively’ to counter cost inflation and supply chain disruption.

Sales in its UK and South African businesses had been strong, rising 16.6 per cent and 28.6 per cent respectively.

As a result, it expected record profits for the year while revenues were predicted to rise 22 per cent to £396million.

Inflation worries were continuing to sour the market mood ahead of the Easter break, with a decision by the European Central Bank not to raise interest rates breaking with the trend across other monetary policymakers.

Broadcaster ITV was down 2.6 per cent, or 2.08p, to 77.02p after going ex-dividend, meaning the stock was now trading without the value of its next dividend payment.

Meanwhile, a rise in the value of the pound weighed on dollar-earning companies, with British American Tobacco falling 0.1 per cent, or 1.5p, to 3262p while rival Imperial Brands remained in the red, down 0.5 per cent, or 9p, at 1660.5p.

Deep Trekker makes remote-operated underwater robots that can be used for inspection and maintenance purposes. Halma shares rose 2 per cent, or 49p, to 2521p.

Recruitment firm Hays inched up 0.9 per cent, or 1.1p, at 121p after posting a record third quarter as the red hot job market boosted hiring demand.

The firm reported that fees in the three months to the end of March had grown 32 per cent year-on-year, with record performances in 19 countries including Germany, its largest market. However, Hays warned its exit from Russia could cost £5million.

Dunelm rose 0.5 per cent, or 5p, to 1065p after the homeware retailer reported a strong rise in sales for its third quarter.

Revenues for the three months to March 26 surged 69 per cent to £399million, although the percentage of sales made online plunged 58 percentage points as lockdown restrictions eased.