MARKET REPORT: Energy giants get an electric shock on reports that the Chancellor is drawing up plans for a windfall tax

By Oliver Hail, Proactive Investors, For The Daily Mail

It was an uncomfortable day for investors in energy stocks with Rishi Sunak’s mooted plans for a windfall tax proving to be the pain point.

The Chancellor is said to be drawing up plans for a windfall tax on electricity generators on top of a hit to North Sea oil and gas producers.

Caving in to pressure? Chancellor Rishi Sunak is said to be drawing up plans for a windfall tax on electricity generators on top of a hit to North Sea oil and gas producers

The aim of the one-off tax is to raise additional cash to help those struggling with spiralling household bills.

‘While it is right that some support should be given to those most in need during these difficult times, the way in which new funds are raised means the Government runs the risk that energy companies slow down investment in new green projects which could make it harder for the country to hit its net zero emissions targets,’ he said.

For Centrica, the minor share price mauling looks unlikely to prevent its return to the FTSE 100 when relegations and promotions are decided at the end of the month.

Up more than 50 per cent in the past year, and now valued £5.3billion, it has rattled up the rankings to become Britain’s 80th most valuable listed company.

Just days after the Premier League title and relegation battles were decided, Centrica is inked in as the likely replacement for relegation candidates ITV or Royal Mail, which have dropped 38 per cent and 39 per cent so far this year and both find themselves as near certainties to exit the top-flight. 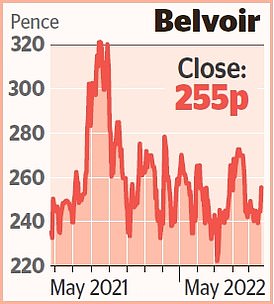 Belvoir, the property franchise group, is adding to its financial services capacity with a £3.7million swoop for The Time Group.

Mortgage service provider Time turned over £4.2million in the last financial year and booked a pre-tax profit of £630,000.

The acquisition, which will be immediately earnings enhancing, brings on board 64 mortgage advisers taking Belvoir’s total to 307.

As for Royal Mail, it fell 5.5 per cent, or 18.3p, to 313.7p as Peel Hunt downgraded its recommendation to ‘sell’ from ‘buy’ and its price target to 307p from 550p following results last week that delivered a triple dose of bad news.

Not only did Royal Mail undershoot profit forecasts, it said costs were growing and activity levels were receding from the highs seen during the Covid outbreak.

The broker said it was assuming there will be a 10.5 per cent fall in full-year 2023 domestic parcel volumes compared to previous assumptions of a flat performance.

International parcel volumes, which dropped 42 per cent last year, are expected to go down a further 8 per cent before recovering a little ground in 2024, the broker said in a note to clients.

The FTSE index changes will be based on closing prices next Tuesday and are expected to be announced on June 1, with the changes effective from June 20.

Amigo Holdings, the controversial guarantor lender, rallied 16 per cent, or 1.01p, to 7.3p after the suspension was lifted on its shares when the High Court decided yesterday that its scheme to pay back borrowers would be sanctioned, with a full ruling to follow later.

Amigo’s proposal to the court is to hand out cash contributions of £97million from internally generated resources, alongside a further £15million from a new fundraising.

‘We are pleased that the court has decided to allow creditors the chance to maximise their redress payments from Amigo,’ said chief executive Gary Jennison.