Shares in North Sea oil and gas firms plunged amid fears over an extension to the windfall tax.

Ahead of Thursday’s autumn statement, Chancellor Jeremy Hunt is expected to hike the levy on energy firm profits to 35 per cent from 25 per cent in a bid to shore up the public finances through tax rises and spending cuts.

This would see the oil and gas sector’s effective tax rate on UK profits rise to 75 per cent from 65 per cent.

Gas tanks: Chancellor Jeremy Hunt is expected to hike the windfall tax levy on energy firm profits to 35% from 25% in a bid to shore up the public finances

The Association of British Independent Exploration Companies (Brindex), which represents 20 UK oil and gas firms, has hit out against the plans and warned it would impact investment in new projects.

Michael Hewson of CMC Markets said: ‘The likes of BP and Shell would probably be able to absorb better due to their global footprint, but would be increasingly problematic for the likes of Harbour Energy and EnQuest who make the bulk of their profits from domestic sources.’

Analysts at Stifel added that the windfall tax is an issue of politics rather than policy and would not be removed even if prices fall further.

Ithaca Energy, which floated at 250p last Wednesday in the biggest listing on the London Stock Exchange so far this year, fell 9.9 per cent, or 23p, to 210p 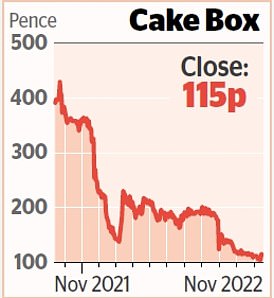 Cake Box breathed a sigh of relief after sales picked up following a difficult summer.

But business has since proved sweeter with sales up in stores and online in October compared with a year earlier.

Informa was among the biggest risers on the blue-chip index after it cheered the return of events following the disruption caused by Covid.

The publishing and exhibitions organiser said revenue rose 41 per cent in the ten months from January to October 2022.

Informa raised revenue forecasts for the year by £100million to between £2.3billion to £2.35billion.

Pharma stocks started the week on a strong footing following a host of positive updates.

AstraZeneca gained 2.6 per cent, or 270p, to 10868p after three of its drugs were recommended for regulatory approval by the European Union.

Cyber-security group Darktrace cheered the strong demand for one of its new products that uses artificial intelligence (AI) to curb cyber-attacks.

Prevent, which was rolled out in August, ‘has seen the longest list of customer opt-ins than for any product launch in its history’.

Beazley, meanwhile, rose 4.2 per cent, or 25.5p, to 632p after analysts at RBC reiterated the bank’s ‘outperform’ rating and raised the insurer’s target price to 775p from 675p.

The broker said Beazley’s update last Friday demonstrated its ‘underwriting prowess in a quarter challenged by the impact of Hurricane Ian’.

Kainos Group rose 3 per cent, or 43p, to 1481p after the IT firm hailed its ‘transition to a global business’ after a surge in revenue, staff hires and growing demand from customers.