A little optimism can go a long way these days – particularly for hard-hit companies.

This was the case for Tui, whose shares leapt after boss Fritz Joussen told a German newspaper that he expects ‘a largely normal summer’ for the company this year.

His comments, made over the weekend, were reassuring for investors in the battered travel industry, which was among the worst-hit in 2020 when Covid chaos grounded flights for months on end and in many countries put paid even to domestic trips.

The rollout of multiple vaccines this winter comes during the quietest part of the year for travel firms – and the mass jab programmes may mean holidaymakers desperate for a beach break can book ahead for the summer.

The Anglo-German travel company will be helped by the fact that it sells holidays both in Europe and further afield – and that it does not overly rely on customers coming from any one country.

The FTSE 250-listed group crashed to a £2.9billion loss in the year to September, after the pandemic forced it to cancel thousands of trips, including 80 per cent during the lucrative summer season.

But Tui shares surged by around 9 per cent in early trading and finished the day up 4.7 per cent, or 21.4p, at 479.8p after the surge in Covid infections and new clampdowns in the UK made traders nervous and ate into some of the earlier gains. Joussen’s upbeat comments meant Tui outperformed many of its peers. 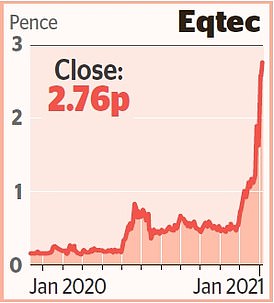 The one-year loan from Altair Group, which owns around 20 per cent of Eqtec, will be used to pay off money still owed to another firm, Riverfort Capital.

Eqtec said earlier this year it has seen an increase in the number of potential clients asking about its technology that burns waste such as wood chippings to make gas.

The wider market rose during the first day of trading in 2021 – although, like Tui, the early surges lost steam later in the day.

Boris Johnson’s Christmas Eve Brexit deal with the EU meant there was no turbulence related to Brexit.

The agreement covers goods rather than services – meaning there are a lot of details that still have to be hammered out, particularly where finance is concerned.

Bitcoin prices see-sawed, with the digital currency racing through the $34,000 mark at rip-roaring speed before slumping back to around $30,000.

One bitcoin was worth around $31,175 last night. Hip replacement-maker Smith & Nephew, up 3.8 per cent, or 57p, to 1567p, completed the £175million takeover of US group Extremity Orthopaedics, which has been working on new shoulder replacement systems.

And Country Life-publisher Future also got a boost, rising 3.7 per cent, or 64p, to 1802p, after providing an update on a deal.

It said it has been given a green light by regulators to buy price comparison site Goco.

Qinetiq – which was spun out of the Ministry of Defence and is said to have been the inspiration for Q in James Bond – will provide engineering services and will work on a radar development programme.Shares fell 0.4 per cent, or 1.2p, to 318.6p.

An upgrade to ‘neutral’ from ‘underperform’ from Exane BNP Paribas analysts was not enough to rouse Next’s stock.

It slid 2.5 per cent, or 174p, to 6912p, as investors braced before seeing the full extent of the damage done by Covid restrictions over Christmas.