JD Wetherspoon sank into the red after a surge in sales over the summer came to an end.

As Britons basked in warmer weather, the FTSE 250 pub chain said sales in August and September – the first nine weeks of its financial year – were 1.5 per cent higher than in the same period of 2019.

But in the following five weeks to November 6, sales slid 1.1 per cent against 2019 – the year before the pandemic struck.

Slowing trade: FTSE 250 pub chain JD Wetherspoon said in the five weeks to November 6, sales slid 1.1% against 2019 – the year before the pandemic struck

Wetherspoons also warned that staff, food and repair costs were ‘substantially higher’ than a year ago.

And while it has cut its debts from £892million at the end of July to £745million, its interest rate bill is expected to be £10million higher this year as borrowing costs rise.

The company, which has 847 pubs, said seven more will be put on the market in addition to the 32 that recently went up for sale.

Derren Nathan, head of equity research at Hargreaves Lansdown, said: ‘We will need to hold our breath to find out if the more recent slowdown is a blip or a trend, as customers feel their wallets ever more squeezed.

‘With an acceleration in pub disposals and efforts to make a dent in its debt levels, it feels like the pub chain is battening down the hatches, and that may well be a sensible move.’ 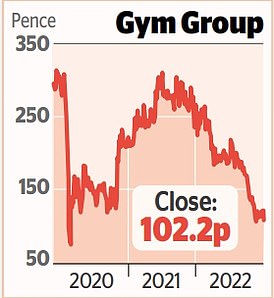 Shares in The Gym Group plunged amid concerns over the shift to hybrid working.

The company, which owns 224 gyms, said a ‘structural shift in working patterns’ after the pandemic has hit 16 gyms dependent on office workers.

It warned utility costs could rise by up to £10million next year.

Revenue soared 78 per cent to £143.2million in the ten months to October.

Wall Street wobbled as uncertainty over the outcome of the tightly contested midterm elections weighed on the mood.

However, analysts suggested markets may pick up, with the S&P posting gains in every 12-month period after a midterm vote since the Second World War, whatever the outcome.

‘There is a likelihood that we have divided government,’ according to Art Hogan, B Riley Financial’s chief market strategist in New York.

‘The general rule of thumb as far as markets are concerned is gridlock is good – fewer policy changes and less risk to individual sectors.’

In London, the US elections took their toll on gambling stocks after Californian voters rejected a proposal to allow online sports betting. It came as Flutter’s revenues rose 31 per cent to £1.9billion in the three months to September, with its US division bringing in £614.3million.

FirstGroup dropped 9.9 per cent, or 10.6p, to 96.3p after the Aberdeen-based bus and train operator warned it could be affected by falling consumer spending and the rail strikes.

The group, which received a takeover approach from a US private equity firm this year, saw its revenue fall to £2.2billion in the 26 weeks to September from £3.1billion a year earlier.

The developer has seen 24 per cent of home purchases cancelled in the second half of its financial year – up from 14 per cent in 2021 – as the economic climate worsened. Shares rose 2.1 per cent, or 2p, to 97.9p.

Ithaca Energy fell 8 per cent, or 20p, to 230p after the North Sea oil producer floated its shares at 250p in the biggest listing on the London Stock Exchange so far this year.