MARKET REPORT: US tech takes a battering amid misery on Wall Street as storm clouds gather around the global economy

US stock markets took another beating last night as the global sell-off accelerated.

The tech-heavy Nasdaq tumbled 4 per cent, and the Dow Jones slid 2 per cent. Shares in technology companies were hit once again with electric car-maker Tesla down 9 per cent, Facebook owner Meta off 3.7 per cent and Apple 3.3 per cent lower.

The downturn came after several of the world’s key central banks hiked interest rates in recent weeks, in an attempt to fight soaring inflation.

But if they bump up rates too fast, they risk depressing the Covid recovery.

This is a worry for high-growth companies such as Meta and Tesla.

The latest market slide came after data showed Chinese exports grew at the slowest rate in two years – up just 3.9 per cent in April – as the world’s second largest economy was battered by Covid lockdowns and weak global demand.

In London, concerns that a slowdown in China will hit demand for raw materials sent shares in Glencore down 6 per cent, or 29.05p, to 458.55p. 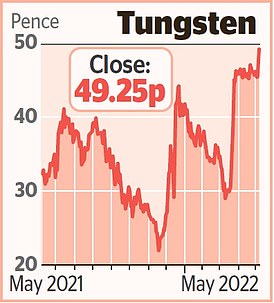 Tungsten Corp jumped after accepting a takeover bid from a Swedish automation firm.

The all-cash offer from Pagero Group values the electronic invoicing specialist at £61million, or 48p per share.

The bid trumps a previous 42p per share offer from Californian group Kofax.

The company’s board will unanimously recommend the Pagero bid to shareholders having previously backed the Kofax offer.

Oil prices also took a hit with Brent crude tumblin 7 per cent to $105 a barrel, although the prospect of a European ban on Russian oil continued to provide a bedrock of support.

Housebuilders were on the slide after analysts at Deutsche Bank slashed their target prices across the sector as they counted the cost of fire safety works to repair dangerous cladding.

FTSE 250 insurer Beazley bounced 32.7 per cent, or 11.6p, to 441.8p after analysts at both Jefferies and Berenberg hiked their target prices on the stock.

Irish conglomerate NCC Group rose 3.7 per cent, or 6.8p, to 191.8p after unveiling its next chief executive.

Mike Maddison, head of cyber-security for Europe, the Middle East and Africa at accountancy group EY, will take over the top job at the start of August replacing outgoing boss Adam Palser.

The group also issued a brief trading update, predicting that revenues in the second half will be ‘substantially higher’ than both the first half and year-on-year.

Victrex dropped 6.8 per cent, or 123p, to 1675p following a disappointing set of half-year results.

The polymer maker reported a pre-tax profit of £43.6million for the six months to the end of March, down 6 per cent year-on-year despite a 6 per cent rise in revenues to £160.1million.

The profit dip was blamed on costs relating to the firm’s implementation of a new software system.