Goldman Sachs has sounded the alarm over commercial property in the UK – and warned the sector could see a crash fuelled by soaring interest rates.

The investment bank predicted that values across the sector could fall by 15 per cent to 20 per cent between June this year and the end of 2024, effectively wiping up to £14billion off the portfolios of some of the industry’s biggest players.

Goldman analysts said the sharp ‘price correction’ would come as a result of the rising cost of funding as interest rate hikes from the Bank of England made it more expensive for developers to take out loans.

Sounding the alarm: Goldman Sachs predicts values across the UK commercial property  sector could fall by 15% to 20% between June this year and the end of 2024

The bank added that due to the darkening outlook for the economy, retail landlords would come under ‘renewed pressure’ over the next 12 months as consumer-focused businesses faced a slowdown in demand caused by the cost of living squeeze.

The Wall Street giant also highlighted an ‘increasing risk of vacancy’ as some businesses went bust, and warned rising energy costs for remaining tenants would not be ‘unfelt’ by landlords with slim profit margins.

‘The overall impact of rising energy costs may be small, but for lower-margin business will not be insignificant in our view,’ Goldman analysts said.

The bank added that weakness in the sector could increase the potential for mergers and acquisitions as buyers looked to snap up firms on the cheap. 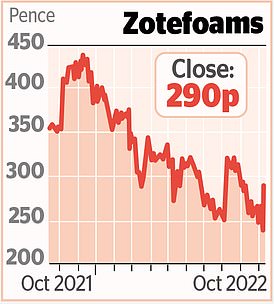 The firm, which makes materials for shoes, insulation and packaging, reported record sales for its third quarter and said profit margins were being boosted by price rises.

Risks around its energy costs had also reduced due to support from the Government.

As a result, Zotefoams expected profits for the full year to be ‘significantly ahead’ of market expectations. Shares surged 24.5 per cent, or 57p, to 290p.

But both businesses are still nursing brutal losses in the year-to-date, with British Land down nearly 40 per cent since early January and LandSec falling 35 per cent.

The blue-chip index was headed for its seventh consecutive session in the red after higher-than-expected US inflation data sparked fears of more sharp interest rate hikes from the Federal Reserve.

But it rallied towards the close following a rebound in US markets as well as reports the Government was considering scrapping more parts of Chancellor Kwasi Kwarteng’s mini-Budget.

Oil prices were on the back foot amid worries fuel demand will be hit by a global economic slowdown, a fear exacerbated by the prospect of ever-higher interest rates.

International benchmark Brent crude slipped to below $92 a barrel, but Shell shares recovered from an early slide to rise 1.5 per cent, or 33.5p, to 2302.5p.

BP climbed 2 per cent, or 8.9p, to 458.25p on the day its electric vehicle-charging business signed a deal to support the fleet of London car hire firm Addison Lee.

AB Foods, the owner of High Street retailer Primark, rose 2.9 per cent, or 36.5p, to 1286.5p after revealing its discount clothing store would be launching a click-and-collect trial service at 25 of its stores before the end of the year.