Telecom Plus brought some much-needed cheer to the stock market as record numbers of households flocked to its Utility Warehouse website to save money on bills.

The FTSE 250 company, which offers discounts by bundling together a range of services such as gas, electricity, mobile, broadband and insurance into one bill, said customer numbers rose by 86,004 in the six months to the end of September.

That took the total number on its books to 814,684 and was a significant step in its aim to add 1m customers over the next four to five years.

Bundled bills: Telecom Plus  said customer numbers rose by 86,004 in the six months to the end of September

The company said it now expects profits for the year to be ‘materially ahead of current market expectations’ of £75million. Shares jumped 24 per cent, or 414p, to 2140p.

‘At a time when cost-of-living pressures continue to rise, we are uniquely positioned to offer households what they need now more than ever: savings on their essential bills and an extra income from recommending these savings to their friends and family,’ said co-chief executives Andrew Lindsay and Stuart Burnett.

The wider stock market kicked off the final quarter of the year in a cautious mood amid mounting fears of a global recession.

Oil stocks were on the rise after the price of crude headed back towards $90 a barrel. 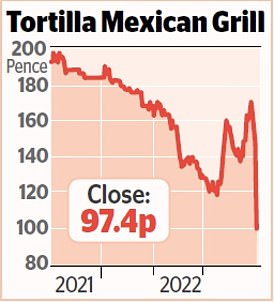 The restaurant group said it will take a £1.8million hit from a 40 per cent surge in the price of meat while increased utility bills will cost it £500,000.

Slower summer sales also took their toll with train strikes and the heatwave leading to an estimated £250,000 in lost sales.

The sector has been hammered in recent days as investors fretted about the impact more expensive mortgages would have on demand for homes and prices.

It was another tough session for travel stocks amid concerns that a global recession will hit demand for holidays as families rein in spending.

FTSE 250 components business Essentra rose 15.3 per cent, or 27.9p, to 210.5p after it sold its filters business to Centaury Management in a £262.1million deal and completed the sale of its packaging arm to Mayr-Melnhof.

Essentra plans to return £150million to shareholders via a special dividend. The company also announced that Paul Forman will step down as chief executive at the end of this year. He will be replaced by Scott Fawcett, who is managing director of Essentra’s components division.

Frasers – which owns Sports Direct, House of Fraser and Evans Cycles – has offered 2p a share for the company.

That has pitted Ashley against his arch rival Sir Philip Green who is MySale’s second largest shareholder behind Frasers. Frasers said it effectively holds a 50.1 per cent stake in MySale after receiving the backing of a number of shareholders.

‘MySale shareholders who have not yet accepted the offer are urged to do so as soon as possible,’ Frasers added.